Where Residents Rely Most on Debt to Make Ends Meet

As a general budgeting rule, it’s not wise to go into debt to meet day-to-day spending needs. But with the COVID-19 pandemic impacting every aspect of American life, the rules are changing.

In fact, U.S. Census Bureau survey data from mid-July shows that large segments of the American population are relying on credit cards, loans and help from friends or family to survive.

In this study, LendingTree researchers used this data to estimate the places where residents were using debt the most to meet everyday spending needs. Here’s what we found.

The District of Columbia had the highest percentage (30.7%) of residents who used credit cards or loans to meet everyday spending needs during the period in mid-July covered by the Census Bureau survey. Other methods that D.C. residents used to make ends meet included:

More than 8 in 10 reported to the Census Bureau in mid-June that they had already received or were expecting to receive their economic impact payment, likely leaving those needing an infusion of cash to meet weekly spending needs to seek other methods.

In the Centennial State, using credit cards or loans (26.7%) was almost as likely to be a tactic for financing immediate spending needs as using savings or selling assets (28.5%). The state enacted limitations in late June that protect up to $4,000 in bank accounts from wage garnishments, so that could help make savings a more plausible option for those already dealing with debt.

Unemployment benefits in Colorado, on the other hand, were the second-least likely option (11.3%), which is backed up by the state’s relatively low July unemployment rate of 7.4%.

Nevada residents were slightly more likely to use money from savings or selling assets (28.3%) than they were to use credit cards or loans (25.3%) to finance necessary expenses.

The state had the third-highest July unemployment rate (14%) in the nation. By contrast, bordering Utah had the lowest rate at 4.5%. So Nevada’s rate is in line with the sizable percentage of people (20%) who used those benefits to make ends meet.

North Dakota had the lowest percentage of people who used debt to pay for necessary expenses. North Dakotans were more than twice as likely to use credit cards or loans (16.5%) than they were to either borrow from friends or family (7.3%) or use unemployment benefits (7.2%). That aligns with the state having the seventh-lowest unemployment rate (6.6%, tied with Iowa).

The most-used tactics for residents were:

Like North Dakota residents, Vermonters were most likely to use either money from savings or selling assets (24.6%) or economic impact payments (20.2%) to pay for their necessary expenses. That just beats out credit cards and loans, which came in at 19.2%.

Vermont residents were least likely to use either money saved from deferred or forgiven payments (5.6%) or money borrowed from friends or family (6%) to meet their spending needs.

While 80.9% of New Hampshire residents were able to rely on regular sources of income, more than a quarter (26.6%) said they had to dip into their savings or sell assets to make ends meet. And about one-fifth said they used credit cards or loans.

New Hampshire residents on average have higher median household incomes than the U.S. average, which could have contributed to a decreased need to rely on debt during these unprecedented times.

Living through a pandemic is stressful, and adding debt to the mix is going to heighten that sense. Among those who used credit cards or loans to finance their everyday spending, nearly 3 in 4 (73.5%) respondents reported feeling anxious, nervous or on edge at least several days during the survey period. Comparatively, about 65% who used their regular income reported the same feelings. 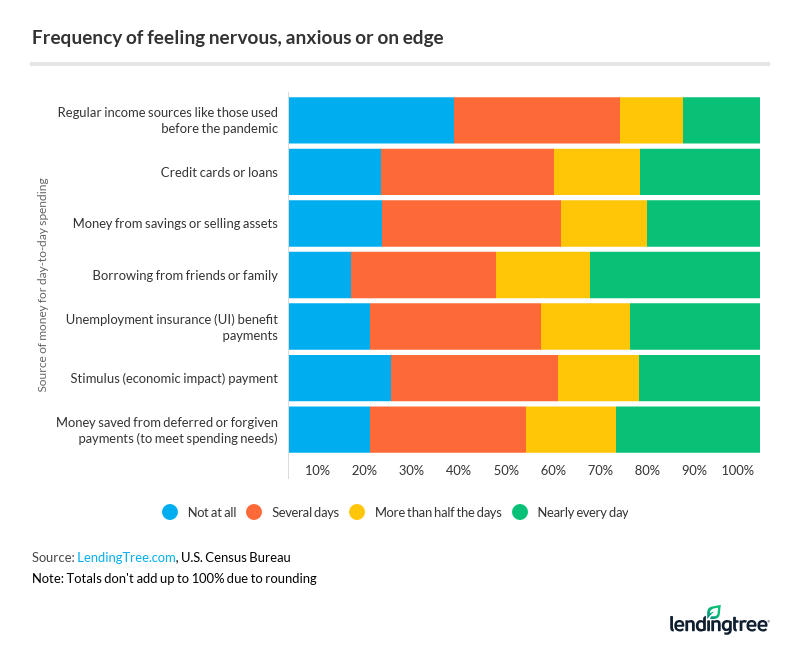 Meanwhile, 36% of people who borrowed money from friends or family reported feeling nervous, anxious or on edge nearly every day.

The idea of borrowing is wrapped up in quite a bit of taboo for some and — if things go wrong — it can have a real impact on relationships. Comparatively, for those who used credit cards or loans, many (36.7%) reported this kind of anxiety several days a week, while only a quarter (25.4%) said it was something that impacted them nearly every day.

Age also showed an interesting trend. Younger individuals tended to report experiencing these feelings most days of the week or more frequently than other groups.

How debt-financed spending weighs on borrowers

About a third reported not being able to stop or control their worrying several days of the week, regardless of the type of non-income source they used to pay for their expenses: 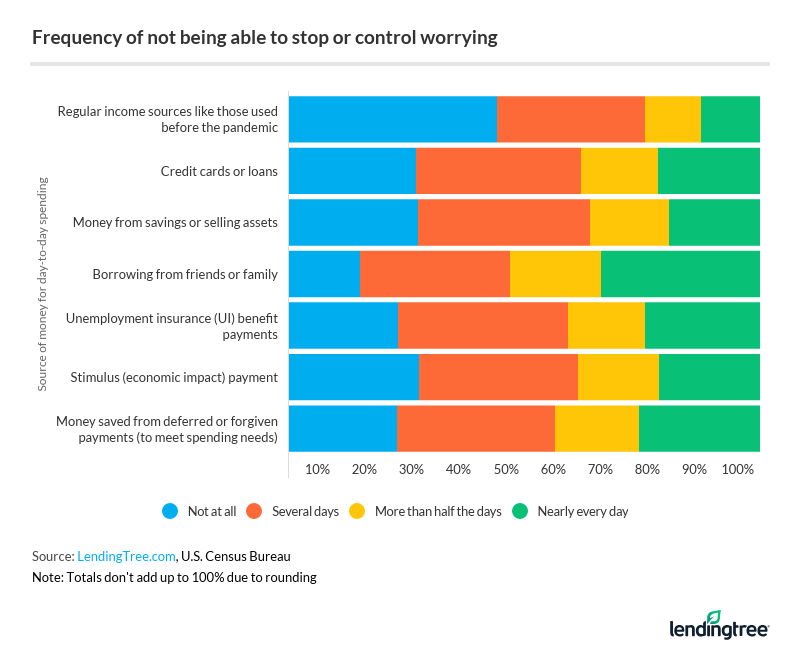 Debt not only impacts your finances, but it can affect your mental health, too. And the first step to getting out of debt (and improving your mental state) is acknowledging that it exists.

“Far too many people just bury their heads in the sand and wind up overwhelmed by debt, and it doesn’t have to be that way,” said Matt Schulz, LendingTree’s chief credit analyst. Part of that could be checking your credit report to view all your loans in one place. Credit reports can be accessed for free weekly through April 2021 at AnnualCreditReport.com.

For those who can afford to step away from debt, here’s what else to consider:

For those who can’t afford to start paying down their debt and need to continue using options like credit cards or personal loans to make ends meet, it can feel that much more difficult. But it won’t always be that way.

“Don’t be so hard on yourself,” Schulz said. “A lot of the normal rules of personal finance go out the window during times like these. Yes, good credit is important, as is avoiding debt. However, keeping food on the table and keeping the lights on for your family is more important.”

LendingTree analyzed the U.S. Census Bureau Housing Pulse Survey data compiled July 16-21, 2020, the last week of the first phase of the survey, to estimate the places where residents were using debt the most to meet everyday spending needs. We compared the total population of people aged 18 and older to the number who responded they used credit cards or loans to meet spending needs, and the number who reported borrowing money from friends or family.

Where Residents Rely Most on Debt to Make Ends Meet

Large segments of the population are relying on credit cards, loans and help from friends or family to survive. Here’s what we found.