Moms Want Quality Time for Mother’s Day, But That’s Not What Americans Are Planning to Give Them

With Mother’s Day around the corner, many people are hunting for the perfect gift. If you haven’t shopped yet, the newest LendingTree survey of more than 2,100 U.S. consumers could stop you from making the wrong purchase or give you time to rethink your decision.

We asked consumers what they’re planning to give this year, and moms on what they hope to receive. One of the top gifts on mom’s list is quality time — even if gift givers are planning other purchases. The free(ish) gift could come in handy, though, considering the pressure to spend on moms can lead to debt.

Keep reading for more findings and insight on how to overcome spending pressure. After all, Mom wouldn’t want you to go over budget.

What moms want vs. what they’ll get

If you aren’t sure where to start shopping for Mom, we did some digging. The good news is that Mom might be easier to please than you think.

The No. 1 gift on her list? A card (36%), followed closely by quality time (32%). If you want to pick up something bright for Mom, the most popular choice is flowers or plants (29%). The experience matters, too, as 25% of moms say they’re hoping for a special meal for Mother’s Day, which far outweighs the percentage of moms hoping for jewelry (15%).

With nearly 3 in 4 (73%) consumers giving Mother’s Day presents this year, what exactly are they planning to gift? Don’t look now, Mom. Despite their best intentions, adult children and spouses miss the mark with their gifting plans. Even though 32% of moms are hoping for the gift of quality time together, only 21% of consumers giving a Mother’s Day gift this year intend to provide that.

Here’s a look at what moms want, versus what consumers intend to give: 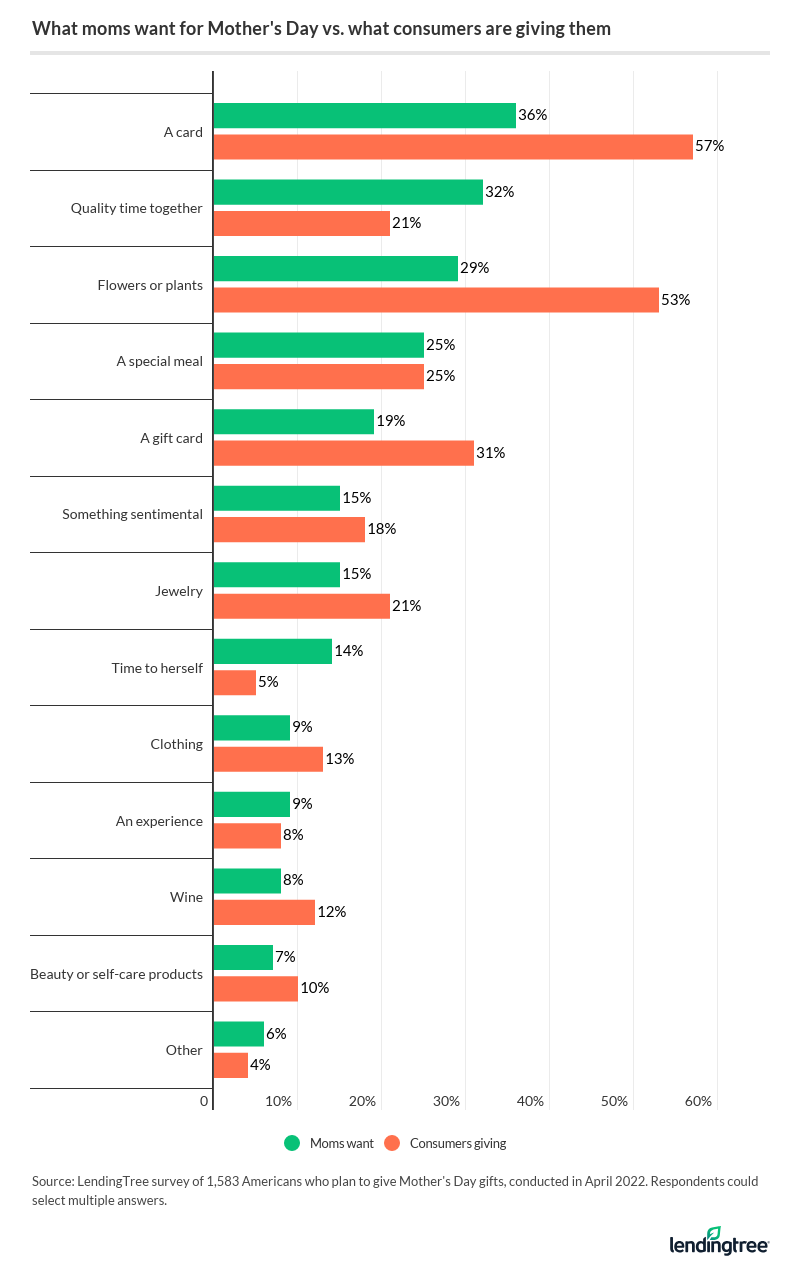 “Though it is a total cliché, it really is often the thought that counts on days like Mother’s Day,” LendingTree chief credit analyst Matt Schulz says. “Sure, it can be tempting to go flashy and spend too much money on a bunch of gifts, but you don’t have to do it that way.

“Quality time can really be about the best gift there is. A thoughtfully planned day of some of Mom’s favorite low-cost activities, followed by a special home-cooked meal, can be a wonderful gift. A sweet love note or some other gift that you made yourself can be amazing, too.”

It’s hard to hit every gift out of the park, but don’t worry that the price tag will disappoint Mom. About 1 in 5 moms admits they’ve been disappointed by Mother’s Day gifts in the past, which increases with each household income level. But 78% of moms don’t expect their kids to spend $50 or more. 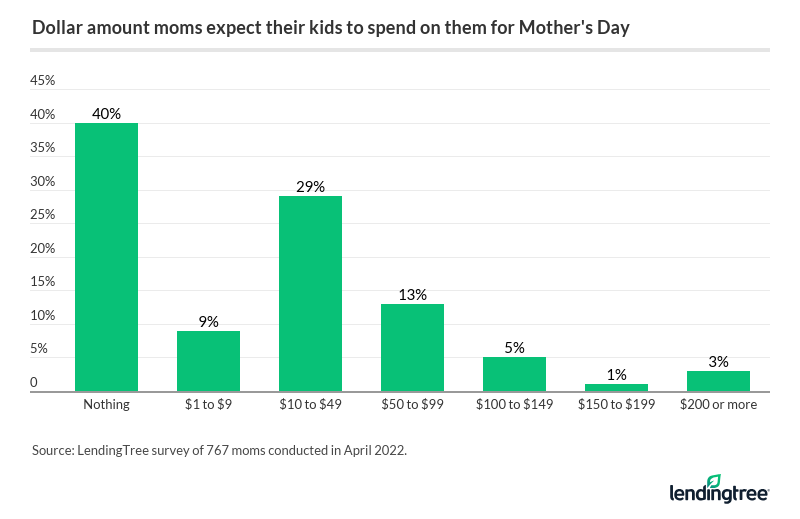 Americans will spend average of $225 on Mother’s Day gifts

Men are the big spenders for Mother’s Day. While Americans will spend an average of $225 on Mother’s Day gifts this year, men ($276) intend to spend more than women ($168). Men who are fathers intend to spend the most ($361), most likely because they have two (or more) people in their life for which to buy gifts, whether that’s spouses, mothers, grandmothers, etc. 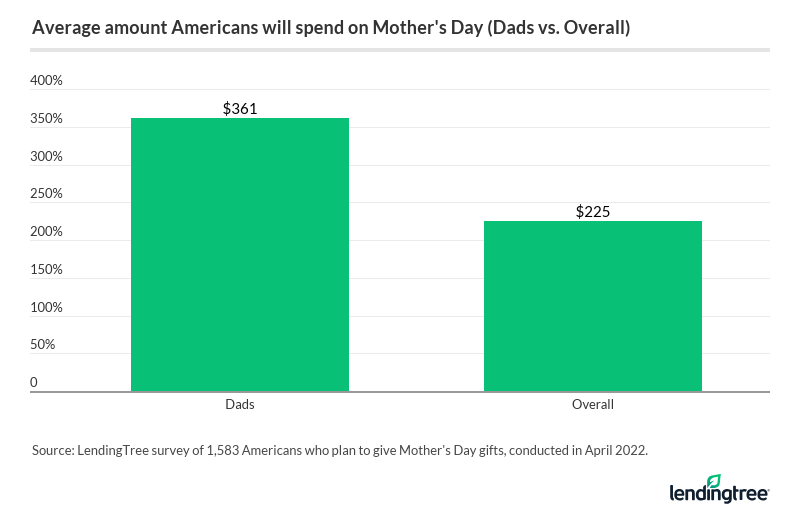 In general, men plan to give Mother’s Day gifts more often than women. While only 20% of men say they won’t buy a gift this year, 33% of women say the same.

“People just want to make sure the moms in their life feel loved and appreciated on Mother’s Day,” Schulz says. “They want them to feel like queens. Moms work so hard, do so much and often get so little thanks that the least we can do is spoil and pamper them on Mother’s Day.”

Amid tough economic times, Schulz says the pressure can be even higher. As much as we may want to spend a bunch of money on Mom, it may not be possible — and that can bring very real feelings of pressure and guilt.

“I’d wager that quite a few families around the nation are going to wrestle with that this Mother’s Day,” Schulz says. 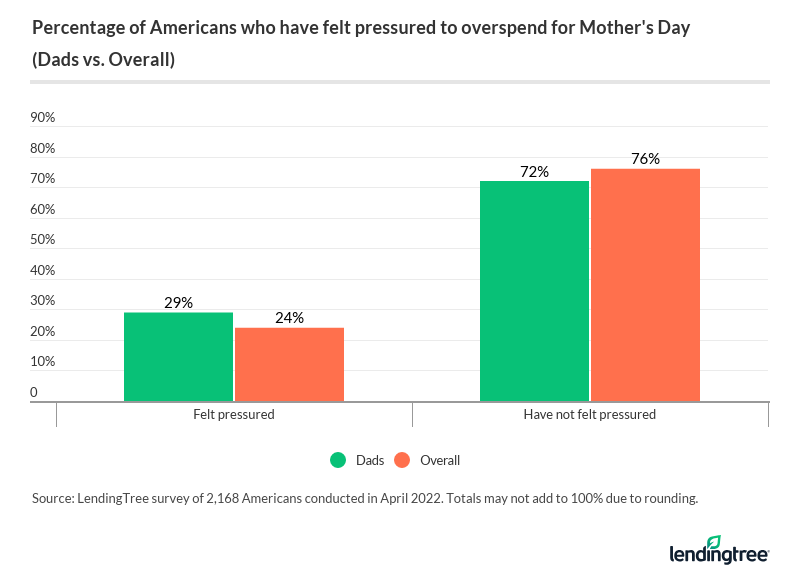 How can you help fight the pressure to overspend? Schulz says communication is key, as with most things in a relationship.

“If times are tough financially, talk about it and let her know that you’re planning to do something special for her, though you’re having to keep costs down,” Schulz says. “Chances are she already knows that your financial situation is a little rockier than it has been and she’ll understand. She probably doesn’t want you to go into debt any more than you do, but it is still important to have the conversation.”

One-third (33%) of gift-givers believe they may take on Mother’s Day debt this year, with those making $100,000 or more a year being the most likely to take on debt compared to other lower household income groups. 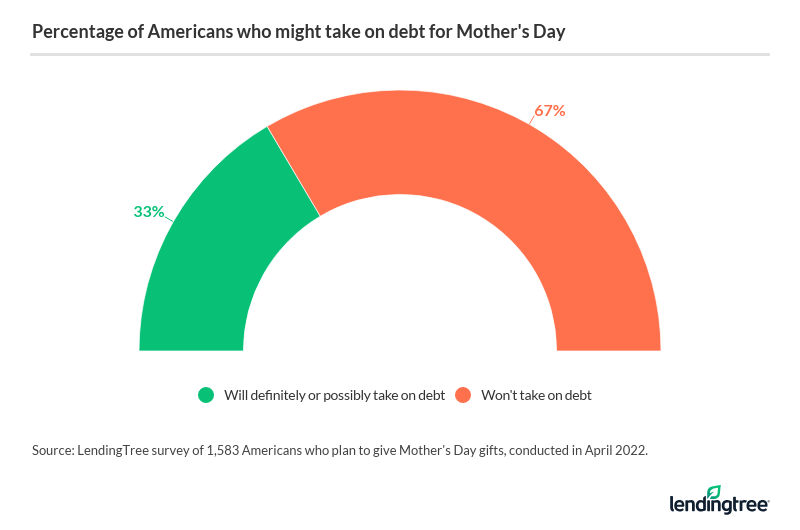 A higher percentage of dads (40%) believe they may take on Mother’s Day debt, versus 28% of men without children.

It’s safe to say that most moms don’t want their kids or spouse to go into debt — which can damage their credit score — to buy a present. (In fact, 38% of respondents overall say their mom has scolded them for spending too much money on her).

Schulz agrees that taking on debt to pay for Mother’s Day gifts can be bad.

“With inflation going through the roof, it may be harder to avoid taking on a little bit of debt now than in recent years, but you should certainly try,” he says.

If you do have to take on some debt this Mother’s Day, Schulz recommends at least doing so in moderation.

“As much as you might want to give her that beautiful piece of jewelry or that trip to Hawaii, digging yourself into debt to do so doesn’t make a whole lot of sense,” Schulz says. “Mother’s Day is important, and of course you want the moms in your life to feel as special and loved as possible, but you shouldn’t necessarily have to take on a bunch of debt to do so.”

For those who plan to buy Mother’s Day gifts this year, some are feeling the impact of inflation. In fact, 40% say inflation impacted the gifts they plan to purchase for Mother’s Day. This was cited by a higher percentage of Gen Zers (47%) and millennials (44%).

And it’s understandable why they may be scaling back. Among the many examples, one of the top gifts Mom wants — flowers and plants — costs 6% more than last year, according to the latest Consumer Price Index from the U.S. Bureau of Labor Statistics.

LendingTree commissioned Qualtrics to conduct an online survey of 2,168 U.S. consumers, April 4-8, 2022. The survey was administered using a non-probability-based sample, and quotas were used to ensure the sample base represented the overall population. All responses were reviewed by researchers for quality control.