LendingTree Reveals the Cities with the Most Foreign-born Homeowners

The Census Bureau recently released data that shows the United States has the highest proportion of immigrants since 1910. In data for 2017, the Census Bureau found that 13.7% of the U.S. population was foreign-born.

Economic studies generally find that immigrant communities contribute to growth in the economy by starting businesses, increasing the labor pool and adding demand for housing. A recent study examining these effects was released by Oxford University and Citi Research, a division of the financial services firm Citigroup. The study estimated that economic growth from 2011 to 2016 would have been much lower without the impact of immigrants and that most of the post-crisis gains in the economy would have been eliminated.

The Citi study found that high-skilled immigrants gravitate to the most dynamic urban centers. This inspired LendingTree to dig deeper into the Census data to identify how cities in the U.S. rank in terms of the proportion of homes owned by foreign-born households. Out of the 50 largest cities in the country, those with a higher share of homes owned by foreign-born residents tend to have higher home prices. This is not to say that immigrants raise home prices — rather, it’s likely that immigrants gravitate towards these cities which have higher home prices, as they also have more dynamic economies and thus more employment opportunities.

The proportion of highly-skilled immigrants is also higher in these cities which puts some upward pressure on home prices as a secondary effect. Thus, homeowners in cities with high foreign-born populations benefit from faster home price appreciation, creating opportunities for them to access this wealth via refinancing their mortgage or home equity extraction. This added spending can in turn boost the economy or provide capital to fund new businesses.

Cities in America with the most foreign-born residents 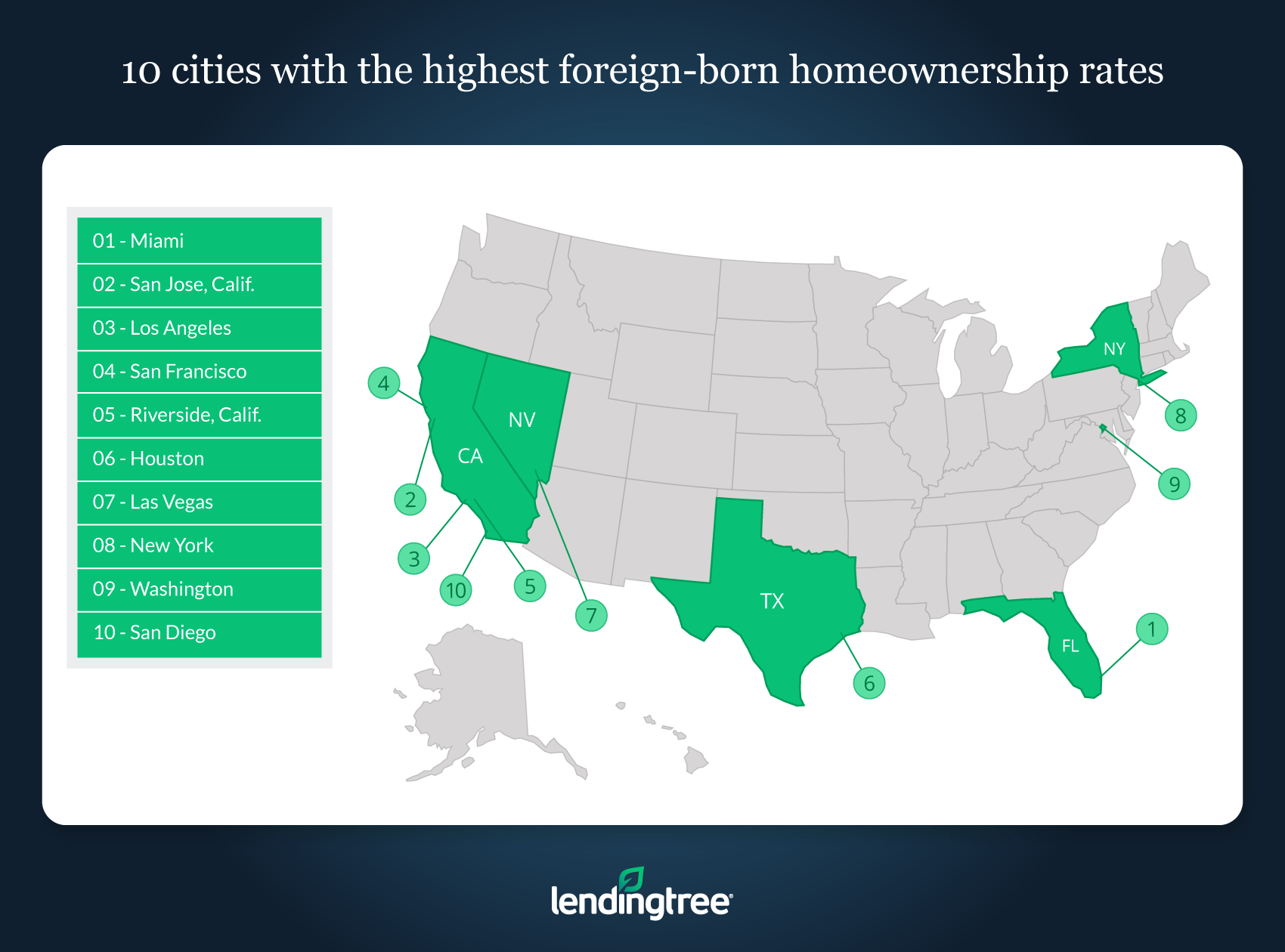 Cities in America with the least foreign-born residents


Methodology
To determine the cities with the highest foreign-born homeownership rates and population, we looked at data pulled on Sept. 20, 2018 from the Census Bureau’s American Community Survey. The data includes median home values that we also included in the study. Our definition of cities is from the Census Bureau’s Core-Based Statistical Area (CBSA) boundaries.
Share Article

There are several tax benefits of buying a home, including tax deductions, which help you reduce your taxable income each year.

READ MORE
Starting a Business as an Immigrant: What You Need to Know

For many immigrants, owning a business in the U.S. is a pathway to employment and financial independence. Learn how to start a business as an immigrant.

READ MORE
How to Save for a House

How to save for a house might seem impossible unless you know the right steps to follow.