41% of Americans Expect the Housing Market to Crash in the Next Year, With the Majority Blaming Inflation

Rising inflation, high credit card debt and mass layoffs have many Americans concerned they’re in a recession. With the economy so uncertain, many wonder: Will the housing market crash, too? As it turns out, just over 2 in 5 (41%) consumers think it will in the next year, according to the latest LendingTree survey of more than 2,000 Americans.

This survey asked consumers about their housing market fears — here’s what else we found.

2 in 5 Americans believe a housing market crash is coming 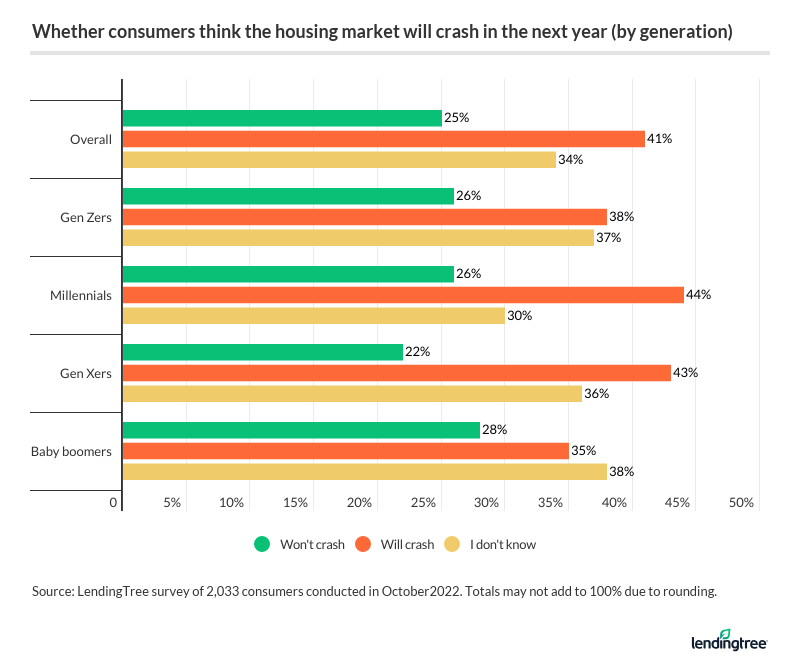 By gender, men (43%) are more likely than women (38%) to think the housing market will crash in the next year.

Crash predictions also vary widely based on education. Specifically, Americans with higher education levels are more likely to say a housing market crash will happen in the next year. To break it down:

It could be worrisome that educated consumers are generally more concerned about a housing market crash, but what do the experts think? According to LendingTree senior economist Jacob Channel, it depends on how you define “crash.”

“While I do think the housing market will continue to slow over the next 12 months and some people may end up underwater on their mortgages as a result, a major crash doesn’t appear likely — at least not at the moment,” he says. “With that said, I do think that home prices will probably come down next year. As of now, 5% to 10% declines in many markets seem reasonable to me.”

Another 16% say the housing market won’t crash because the supply and demand isn’t there — whether that means there are too few houses for sale or too many buyers. Following that, 15% say the measures being taken to prevent inflation from getting worse will prevent a housing crash and 13% say affordable housing is abundant.

The last major housing market crash weighs heavily on many consumers’ minds, as nearly three-quarters (74%) of Americans who believe the housing market will crash in the next year think it’ll be as bad or worse as the 2008 housing market collapse.

Among crash predictors, 33% believe inflation will be the most important factor driving a housing market crash — making it the most common response. Following that, 24% say high interest rates are the biggest driver, while 16% say it’s a lack of affordable housing. 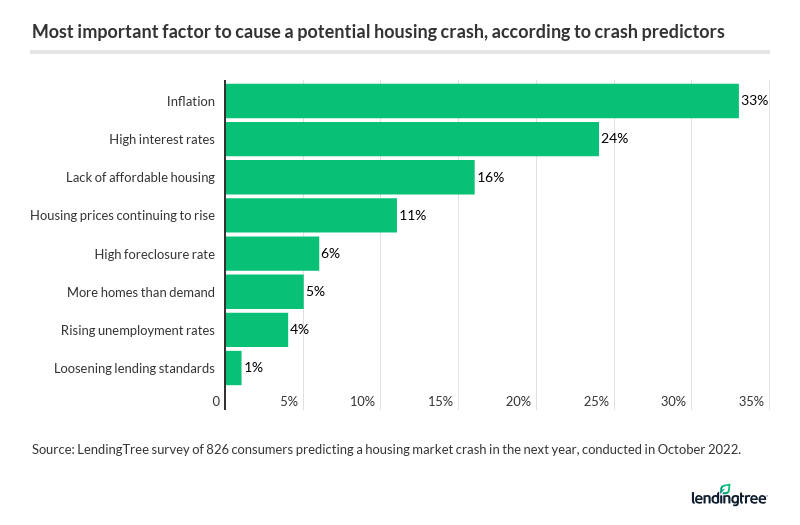 However, Channel says it’s unlikely the market will crash like it did during the Great Recession — in fact, the very factors that crash predictors worry about can offer some peace of mind.

“Today’s homeowners are in a much better position to continue to make their payments, even if we enter a recession,” Channel says. “It’s important to note that the reason why the market crashed in 2008 was because there was diminished demand for homebuying and a massive influx of homes hitting the market due to high foreclosure rates. Right now, we do have reduced demand for new homes, but no massive influx of supply, which puts us in a much better position.”

Not all crash predictors expect another 2008-style collapse, though — just over a quarter (26%) of those who predict a crash in the next year think it won’t be as bad. And like general crash predictions, this also varies by education level. Among crash predictors, 43% of those with a master’s degree think the housing market will fare better than in 2008. On the other hand, just 1 in 5 crash predictors (20%) whose highest academic level is a high school diploma feel similarly.

Some (particularly crash predictors) are putting off major housing decisions

Crash predictors are particularly likely to put off major housing decisions. Of the group that expects a housing crash in the next year, 58% say they’re postponing housing-related changes, mostly by staying where they currently are and waiting to buy (42%).

Among those who don’t think a housing crash will happen, just 39% are postponing housing-related changes. Over a quarter (26%) of this group say they’re staying where they currently are and waiting to buy.

A possible crash isn’t the only concern consumers have about the housing market. The majority (58%) of Americans are also worried about rising mortgage rates. According to Channel, these fears are understandable.

“The rate you get on your loan is one of the biggest determining factors for how expensive your mortgage payments will be,” he says. “The higher your rate, the more you’ll end up spending. Rates have risen so dramatically this year that many new would-be buyers are finding themselves priced out of the market.”

Those would-be buyers are most worried about rising rates, at 83%. Following that, the youngest generation is likely worried about being priced out, with 68% of Gen Zers saying they’re concerned.

Meanwhile, just over half (51%) of homeowners are concerned. While Channel says those rising rates wouldn’t impact homeowners with fixed-rate mortgages, those with adjustable-rate mortgages (ARMs) certainly could be affected because their rates adjust based on financial market conditions. 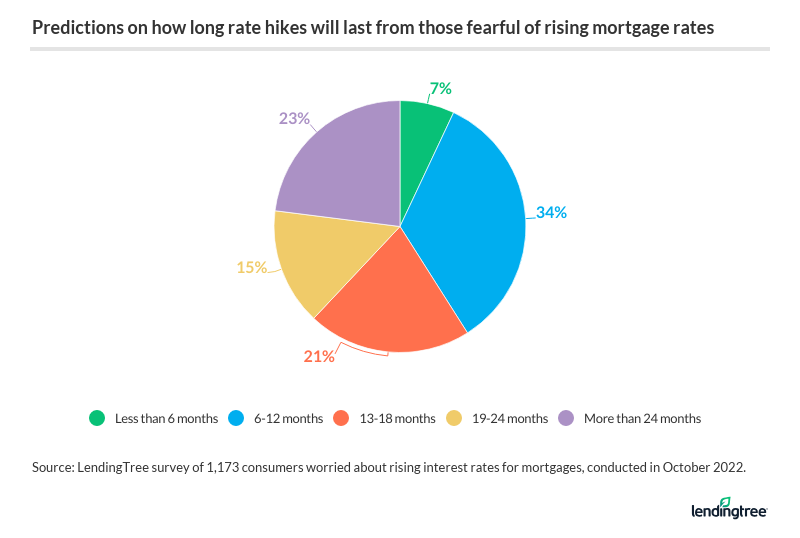 In addition to rising mortgage rates, 3 in 5 Americans (60%) believe housing prices will increase in the next year, while just 26% think prices will decrease. Gen Zers are the most likely generation to expect a housing price increase, at 74%. On the other hand, baby boomers are most likely to expect price decreases, with 37% of this age group expecting lower prices in the coming year.

Majority of homeowners think their appraisal is accurate

A home appraisal, which gives owners an estimate of their home value, can be valuable in an uncertain market. Although consumers are concerned about the housing market, 55% of homeowners think their current home appraisal is accurate. Meanwhile, 33% say their estimated home value is inflated, while 12% say the value is less than what they think it’s worth. 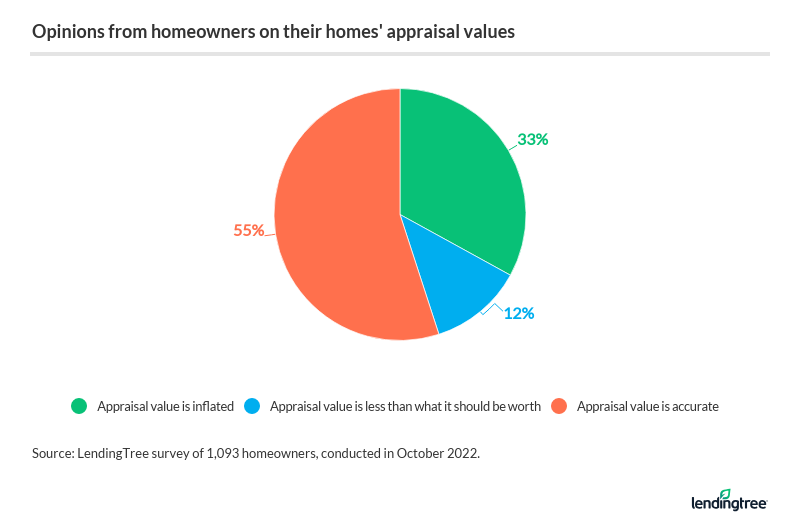 For homeowners concerned about the housing market, Channel says your home appraisal can be particularly helpful.

“Getting your home appraised can provide peace of mind in an uncertain market,” he says. “In some cases, an appraiser can help assuage fears that your home’s value is plummeting. In other cases, they can provide you with more insight into why your home is valued the way that it is and help you understand how you might be able to boost your home’s value.”

Further, he notes that getting an appraisal can also help you see how much you could receive from a home equity loan or something similar. Tapping into a loan could help make your current place feel more livable if you aren’t comfortable buying a new place because of uncertainty about the market or rising rates.

Renters think their rent is too expensive 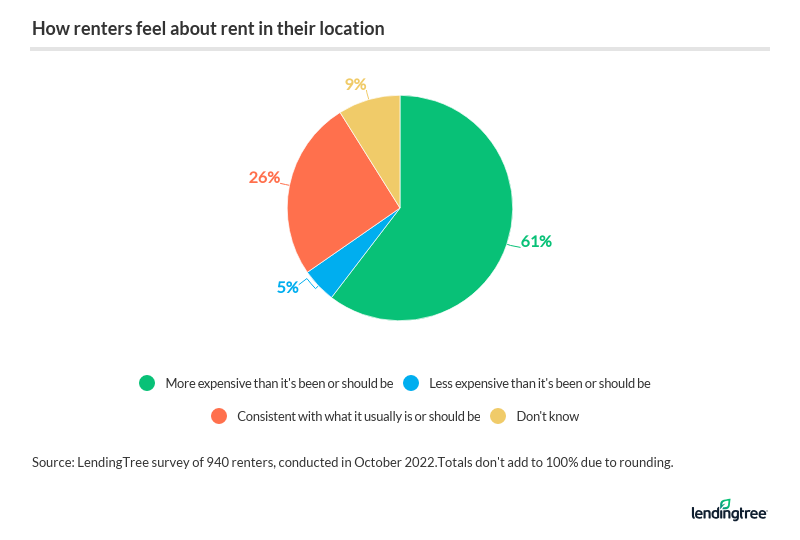 Regardless of your predictions, it’s difficult to predict the future of the housing market. However, it’s always best to keep yourself informed.

For some peace of mind, Channel recommends:

Housing Bubble: What Is It, and Are We In One?

READ MORE
ARMageddon? Number of Adjustable-Rate Mortgages Offered to Borrowers Has More Than Tripled Since 2021

READ MORE
How (and Where) to Find Small Mortgage Loans

Learn why it can be difficult to find small mortgage loans and what key requirements you’ll need to meet to get one. Plus, learn the pros and cons.