The pandemic turned back time for many empty nesters, as their homes were suddenly filled with the pitter-patter of their young adult children’s feet returning to the relative safety and financial security of their parents’ homes. But in the two-plus years since the pandemic’s onset, only a third of those who returned home during the pandemic have spread their wings and flown their parents’ coop again.

LendingTree surveyed more than 1,300 U.S. parents and/or Generation Zers or millennials to get their thoughts on post-pandemic parent-living arrangements. LendingTree researchers also analyzed U.S. Census Bureau data to create a national and state-by-state snapshot of the number of younger adults living at home. 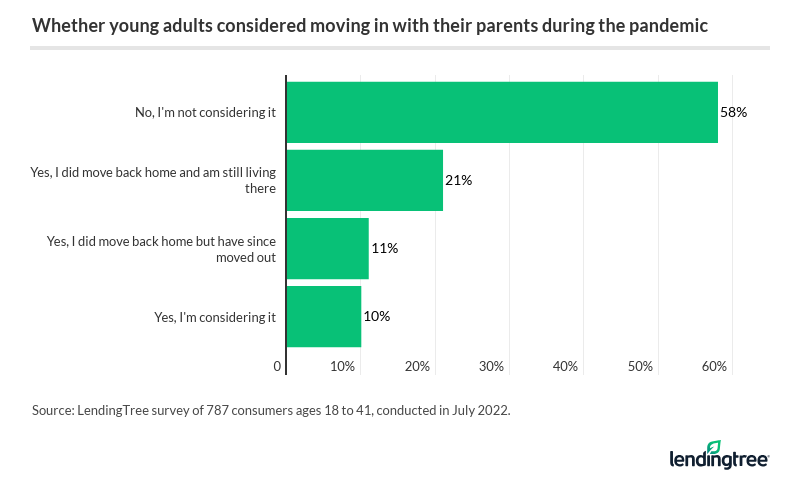 Gen Zers and millennials are almost even on whether they moved home out of necessity (51%) or to save money (49%). But for those considering leaving again, inflation may hamper their ability to do so.

“With inflation as high as it is and with rates rising, it can be difficult for anyone to make ends meet in today’s economy,” says Jacob Channel, LendingTree senior economist.

Younger people still working in entry-level positions may not have the cash resources to overcome the financial stressors of inflation, according to Channel.

While back home, Gen Zers and millennials focus on paying down debt, saving for a down payment

Most young adults who moved back with their parents during the pandemic focused on clearing debt (39%) — saving up for a home down payment, however, was a close second (31%). But no matter the generation, a 2021 LendingTree study shows that credit card debt is the most common nonmortgage debt burden that people carry. Channel also suggests focusing on reducing your student loan or auto loan debt before heading back out on your own. 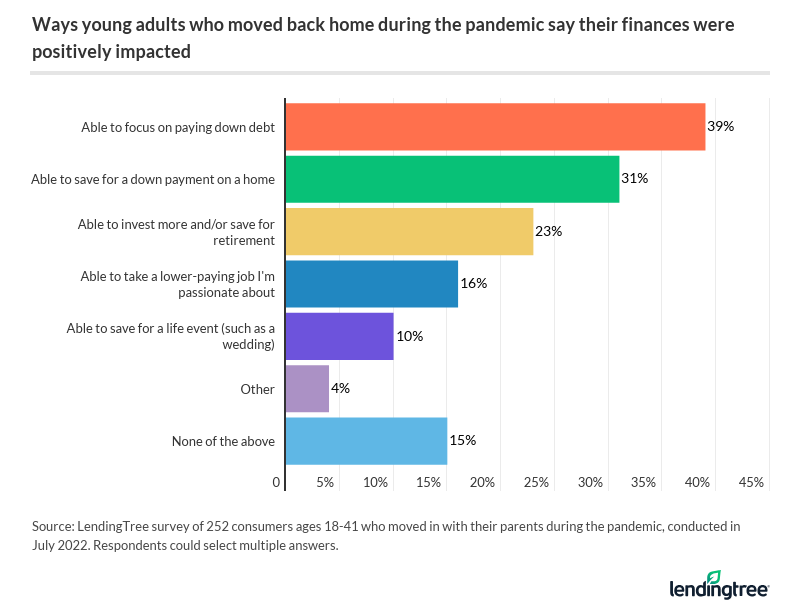 About 1 in 4 young adults opted to invest more or save for retirement (23%). Pursuing a lower-wage job more aligned with their passions appealed to 16% of young adults, while being home stirred up baby or wedding fever for 10%.

Once Gen Zers and millennials flew the coop again, they were more likely to rent (73%) than buy a home (27%). However, that doesn’t mean they should avoid homebuying altogether.

“If you’ve got enough money to afford to buy a house and pay for a mortgage each month, now can be a good time to buy a home, even if prices and rates are high,” Channel says.

Still, desperate times may call for desperate homebound measures in the future — in fact, 70% of young adults would head back home again only if they had no other option.

Is living at home a dating deal breaker?

Living in your parents’ basement may be the new normal in the dating world, with 83% of young adults giving a “yes” (45%) or “maybe” (38%) to the question of dating someone still situated in parental living quarters. 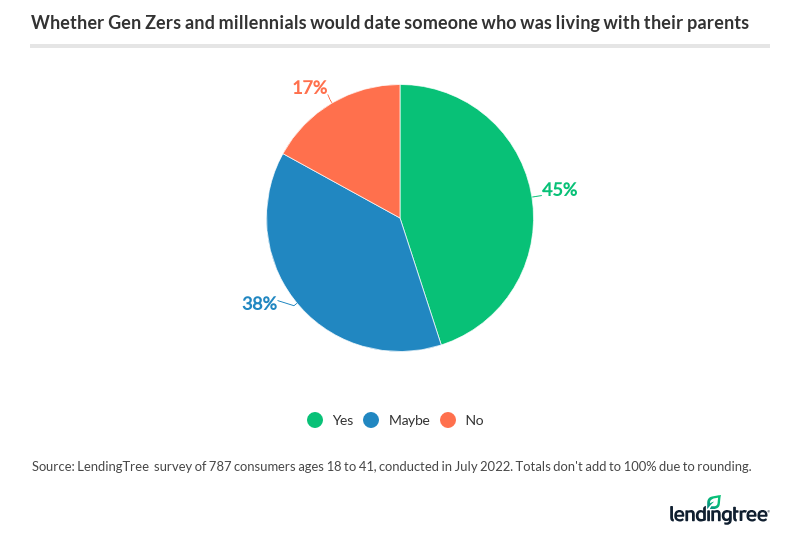 However, older Americans are more likely to shoot down a proposition if you’re still at home. Here’s the breakdown by age group by definite thumbs-downs to dating you if you’re still in your parents’ home:

Only 36% of women are willing to consider dating someone living at home, compared with 54% of men who would be OK dating an individual living with their parents. However, women on the “maybe” scale (44%) outnumber the “maybe” men (32%).

Most parents are OK with their adult kids moving back home

Most parents would allow their adult kids to live at home (56%) if needed, while 29% already have or are currently living with grown-up children. Older parents are less likely to embrace the idea of their adult offspring staying at home — perhaps because they’ve already experienced the rigors of raising a child to adulthood versus younger Americans who are still starry-eyed “baby dreamers.”

Of those who would definitely let their adult kids live at home again:

Despite apparent resistance to the idea of letting their grown-up kids live back home with them, the needs of adult children at home are already being met by the oldest parents. The following age groups currently or previously have allowed Gen Z or millennial kids to live at home again:

Only 1 in 10 parents wouldn’t set any rules for adult children living at home. Most parents would add financial strings to an adult-at-home occupancy, including: 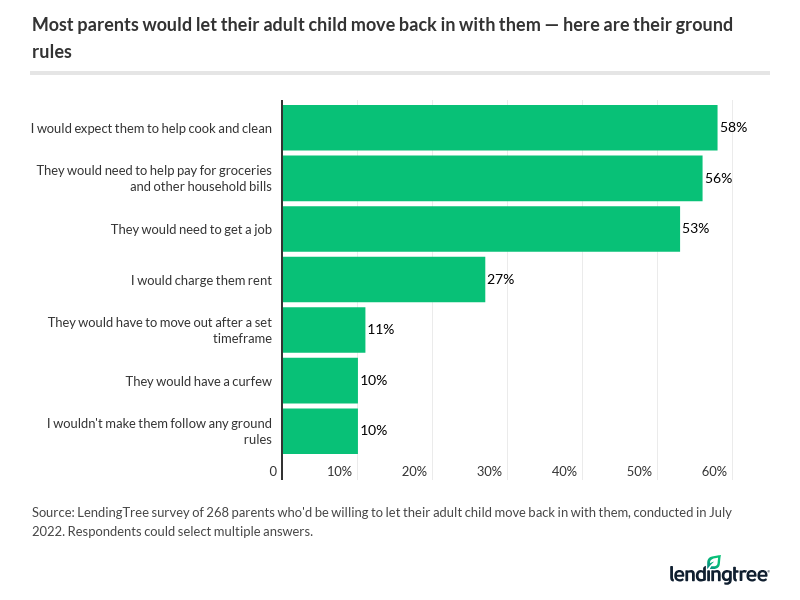 Adults living with parents most common in Hawaii, New Jersey and Florida

LendingTree researchers also analyzed U.S. Census Bureau data to determine how many adults ages 24 to 40 live with their parents across the U.S. (We excluded people who have attended school in the past three months to get a clearer picture.) Out of 67.8 million adults in this age range who meet the criteria, 10.9 million — or 16% — live under their parents’ roof.

Adult children are most likely to reside at home in Hawaii (21.6%), New Jersey (20.7%) and Florida (20.1%). The cost of living is a likely reason for many stay-at-home adult children living in Hawaii and New Jersey, considering how expensive day-to-day expenses are in both states.

Adult children living at home in Florida, a state where the cost of living is lower, may be at home to care for an older parent. As of 2019, Florida had the second-highest population of residents 65 or older, with more than 1 in 5 (20.9%) in that age demographic statewide.

North Dakota (5.3%), Nebraska (8.0%) and South Dakota (8.3%) had the lowest percentage of adult children living with parents. The low unemployment rates in these states may be part of the reason. As of July 2022, Nebraska’s unemployment rate is 2.0%, while both Dakotas come in at 2.3%. That’s significantly less than the unemployment rate of the top-ranking stay-at-home kid states of Hawaii (4.1%) and New Jersey (3.7%).

States where adults live with their parents


Source: LendingTree analysis of microdata from the U.S. Census Bureau 2020 American Community Survey (with five-year estimates). Adults who live with their parents are defined as people between the ages of 24 and 40 who haven’t attended school within the past three months and are identified as the natural, adopted or stepchild of the householder.

LendingTree commissioned Qualtrics to conduct an online survey of 1,324 U.S. consumers from July 26-29, 2022. All respondents were either parents and/or Generation Zers (ages 18 to 25) or millennials (ages 26 to 41). The survey was administered using a nonprobability-based sample, and quotas were used to ensure the sample base represented the overall population. All responses were reviewed by researchers for quality control.

LendingTree researchers also analyzed microdata from the U.S. Census Bureau’s 2020 American Community Survey (with five-year estimates) to determine the rate of adults ages 24 to 40 who live with their parents and haven’t attended school in the past three months. They had to be identified as the natural, adopted or stepchild of the householder.

Nearly 7 in 10 Americans with a monthly rent or mortgage payment have made a sacrifice to pay for housing, according to the newest LendingTree survey.

READ MORE
More Than 4 in 10 Millennials Refinanced Over Past Year, Almost Double The Overall Average

More than 4 in 10 millennial homeowners refinanced their mortgage during the coronavirus pandemic, according to a LendingTree survey.