Nearly 75% of Americans Dislike a Neighbor — Most Common Among Gen Zers, Apartment Dwellers and Northeasterners

Many Americans are having a tough time getting along with a neighbor, whether it’s vibes, noise or rudeness. In fact, 23% of Americans have called the police because of their neighbors, according to the newest LendingTree survey.

Even though 73% of Americans dislike at least one of their neighbors, 74% are friends with at least some of them — making way for a beautiful day in the neighborhood. It’s more common among younger generations, as more than 2 in 10 Gen Zers have bought or rented a home because they like the neighbors.

LendingTree surveyed 1,537 consumers to get the good, the bad and the ugly about life in their neighborhoods. Here are the findings.

Nearly three-fourths of Americans dislike at least one neighbor, with the heebie-jeebies being top turnoff

If you dislike one of your neighbors, you’re in a category with 73% of Americans. Taking it further, nearly 8 in 10 Gen Zers (ages 18 to 25), apartment dwellers and Northeasterners don’t like at least one of their neighbors. Those who make $35,000 to $49,999 a year and condo dwellers aren’t far behind.

The reasons vary. More than a quarter of Americans who dislike a neighbor cite weird vibes, noise and rudeness. Here’s a full look at their neighbor’s dislikable traits: 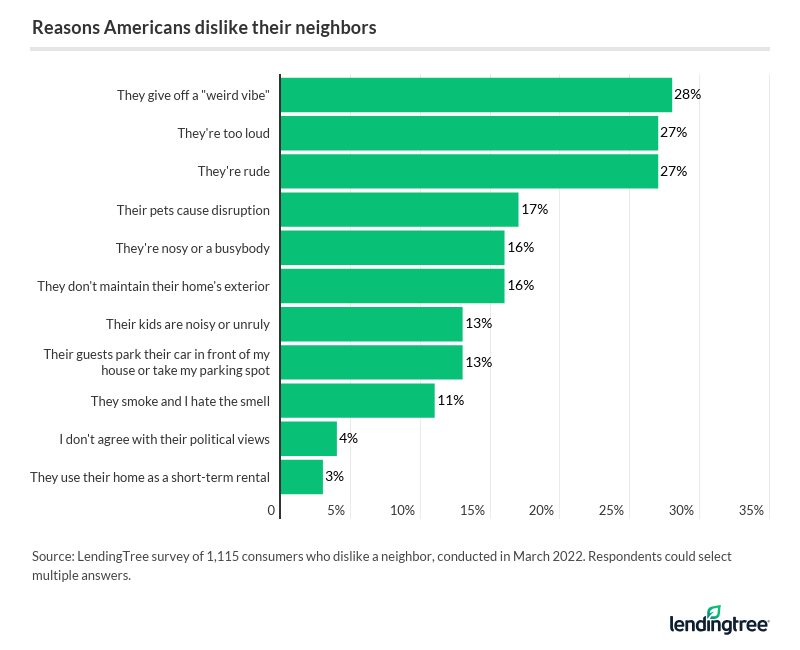 About one-third of Gen Zers get bad vibrations from their neighbors, while nearly a third of millennials (ages 26 to 41) say their neighbors are too loud. Meanwhile, baby boomers (ages 57 to 76) rank rudeness — 27% — as the most undesirable neighbor trait.

Across every demographic in this LendingTree survey — whether by gender, age, living situation, household income, region or more — one of these three responses (vibes, noise and rudeness) was the top concern.

“In today’s hot housing market where prices are high and inventory is limited, the unfortunate reality is that some people might not have any other choice but to live near someone they don’t like,” says Jacob Channel, LendingTree senior economic analyst. “And while getting ‘bad vibes’ from a neighbor can certainly be annoying, dealing with them might be worth it if it means you have an affordable place to live.”

That advice might benefit millennials, who are twice as likely as baby boomers to dislike all their neighbors.

On the flip side, 74% of Americans are friends with at least one of their neighbors. (Talk about a love/hate situation.)

Specifically, 81% of homeowners are friends with at least one of their neighbors, versus just 68% of renters.

These friendships can sometimes sprout into something deeper — buying or renting a house because of the neighbors. More than 1 in 10 Americans (12%) say they’ve done just that, and it’s highest among younger age groups:

Keeping up with the Joneses comes with a price — and pressure

But just like a friendship that can sprout into something deeper, a feeling of needing to keep up with your neighbors can be financially frustrating.

Nearly 1 in 5 Americans (17%) say they feel pressured financially to keep up with their neighbors. As with many other questions in this survey, younger generations are more impacted by this (31% of Gen Zers cite financial pressure, versus just 5% of baby boomers).

Townhouse (37%) and condo (35%) dwellers feel more pressure to keep up with their neighbors, while apartment (23%) and single-family home (14%) occupants don’t care as much. 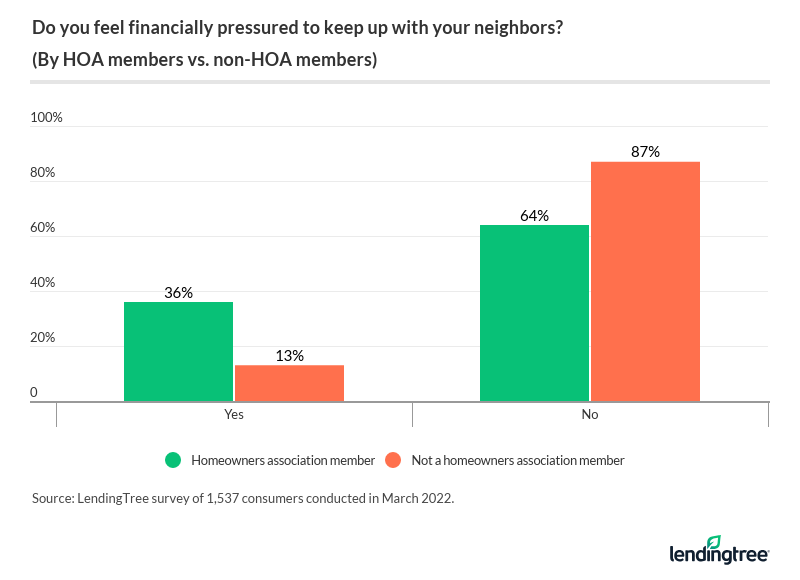 On the political spectrum, Democrats (10%) are more than twice as likely to feel neighbor-induced financial peer pressure than Republicans (4%).

So what are Americans spending on to impress these neighbors, potentially leading to this financial pressure? Gen Zers (11%) and millennials (9%) spent more than they could afford to dazzle a neighbor with an expensive car. Curbside appeal is also important among the age groups, with 8% of Gen Zers and 7% of millennials spending beyond their means for exterior decor to get a neighbor’s attention.

“While some may feel pressure to keep up with the proverbial Joneses, it’s important to remember that it’s typically a smart move to put your financial security above your neighborhood reputation,” Channel says. “In other words, while you should aim to keep your home in good shape, you shouldn’t feel obligated to go into debt or spend excessive amounts of money on things like a car or expensive new shrubbery just because that’s what your neighbors appear to be doing.”

Financial pressure isn’t the only neighborly concern. Amid a politically charged climate in the U.S., 37% of Americans prefer to have neighbors whose political beliefs match their own.

Perhaps the politics involved led more than half (53%) of homeowners in an HOA to befriend fellow residents that share their political beliefs.

The same is true of higher-income earners: More than half (54%) want a meeting of the political minds in their neighborhood. However, political persuasion is less important as income drops:

There’s an age divide, too, with younger generations generally being more tolerant: 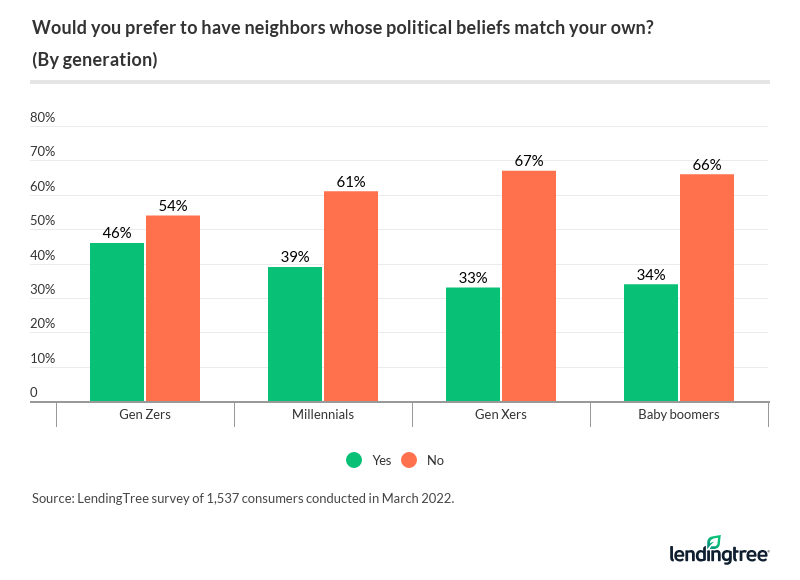 Surprisingly, there’s not much difference across political parties — 43% of Democrats prefer this, versus 42% of Republicans.

Beyond politics, religion can play a role, too. In fact, 6% of Americans say it’s important their neighbors’ religious beliefs match their own, with another 9% saying it depends on their beliefs.

Just over 1 in 10 Black (12%) and Latino (10%) Americans placed importance on the religious beliefs of their neighbors, compared with 4% of white consumers.

So what happens to homeowners and renters who can’t overcome these belief differences or have other issues? Well, more than 1 in 10 Americans (11%) have moved because they didn’t like their neighbors, while another 27% have considered it. 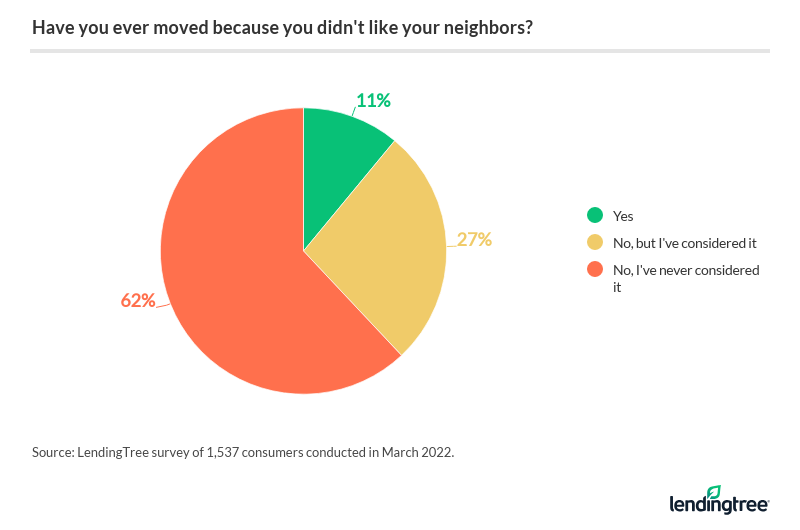 Pondering or not, it’ll be difficult in today’s market. Median home prices in the U.S. are near a record high, mortgage rates are steadily rising and rent costs are increasing at their fastest pace since 2012.

How long you’ve lived in your neighborhood also plays a role in whether neighbors get the best of you and have you pondering a move. A little more than 1 in 10 (13%) who’ve been living in their neighborhood for 15 years or longer would consider leaving because of a nuisance neighbor. Shorter-term occupants pondered an earlier departure:

Whether you’re pondering a move or not, neighborhood disputes aren’t uncommon. In fact, nearly a quarter of Americans (23%) have called law enforcement because of their neighborhoods. While there’s not much variation among age groups, millennials (25%) are most likely to get law enforcement involved with a neighborhood problem, with Gen Zers and Gen Xers (24%) a close second and baby boomers (18%) at the bottom.

The more money Americans make, the more they check on their neighbor’s home value — and peek inside online

The internet has opened a world of possibilities. One of them is real estate marketplaces and similar websites that let you check values, see pictures and more. And not everyone is using these sites because they’re interested in moving.

Nearly a third of Americans (32%) have used one of these sites to keep track of the values of the homes around them — and even check out the interior features through photos posted online. 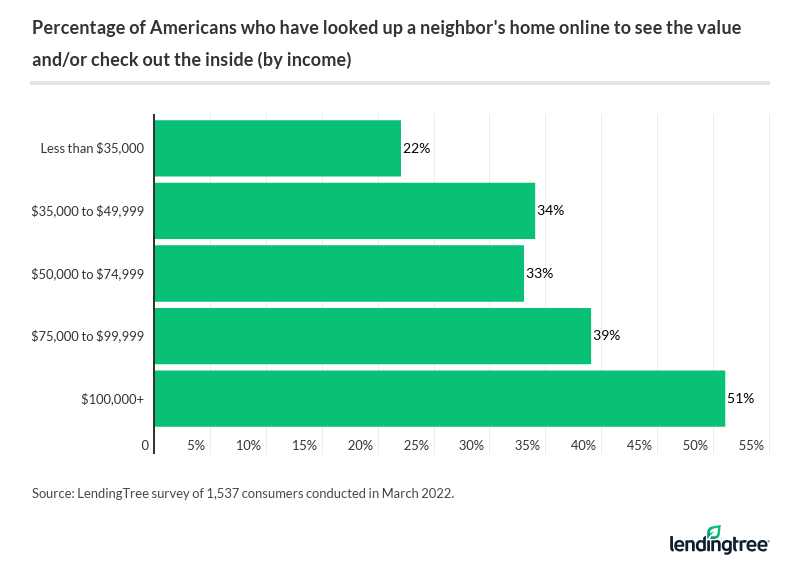 When short-term rentals enter the neighborhood

Another one of those possibilities opened through the internet is the ability to put up your home as a short-term rental (if local laws allow for it, of course). If many are willing to ponder a move because of the actions of their neighbors, how would they feel about short-term renters in their neck of the woods?

One in 10 Americans says short-term renters’ behavior would motivate them to move if a neighbor’s house became an Airbnb or something similar. This percentage spikes to 26% among people in a homeowners association, versus 6% of people who aren’t. And another 32% say it would depend on how the renters behaved while in the home.

If your neighbor is planning on converting their home into a short-term rental unit or doing something else with their property that you think will negatively impact you, consider reaching out and talking to them about it.

“Ultimately, part of being a good neighbor is openly communicating with others who live nearby,” Channel says. “You should always remember that the nuclear option — i.e., moving away — is often not your only choice when a neighbor does something you don’t like.”

LendingTree commissioned Qualtrics to conduct an online survey of 1,537 consumers on March 17-24, 2022. The survey was administered using a nonprobability-based sample, and quotas were used to ensure the sample base represented the overall population. All responses were reviewed by researchers for quality control.