The year 2020 has granted us no shortage of charitable causes to which we can give our money. Between the coronavirus pandemic putting millions out of work and so many nonprofits within the Black Lives Matter movement, it seems like there are more ways than ever to put our wallets to good use.

Charitable giving is a deeply personal financial commitment, but more than 1,000 Americans divulged their donating habits to LendingTree, telling us which causes are close to their hearts, and which causes they donated to in 2020. 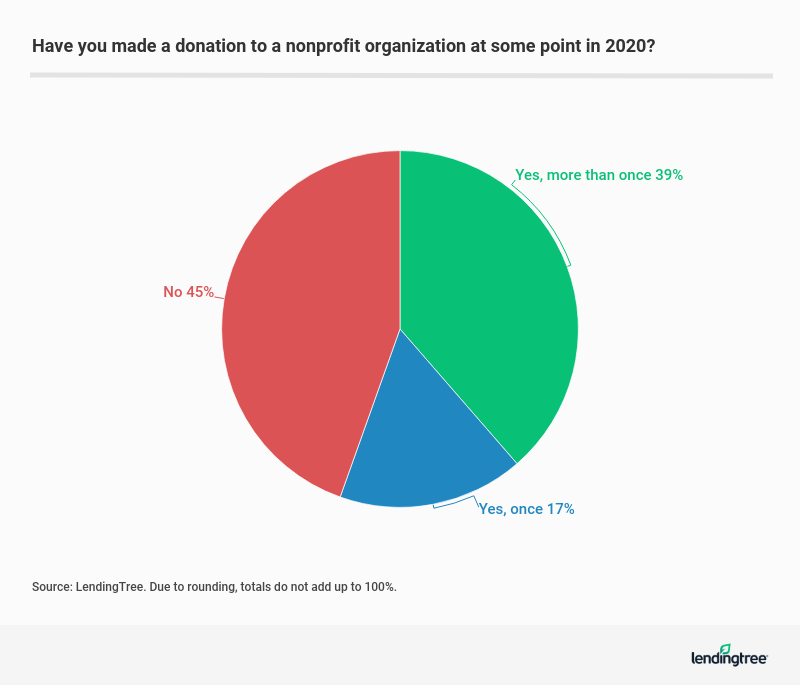 More than one-third (37%) of Americans have changed the way they donate money to charity because of the coronavirus pandemic. That number includes 15% who paused some of their usual donations due to income loss and 14% who donated to a new organization, either as a one-time gift or a new recurring contribution. 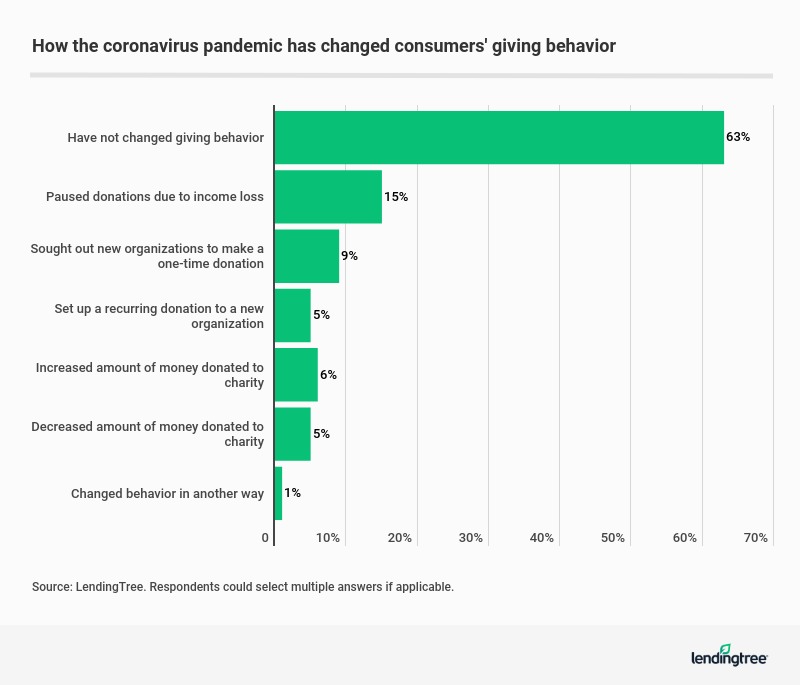 When it comes to charitable giving during the pandemic, it’s not as simple as cutting a check to a nonprofit organization. Americans reported helping their neighbors in a variety of ways, such as:

Plus, some consumers (30%) continue to pay for services they can’t use due to social distancing guidelines, like housekeeping and babysitting. For example, 16% of parents with kids under 18 said they’re continuing to pay a babysitter for their normal hours despite not actually using the service, and 9% of consumers overall elected to continue paying for a gym membership.

That charitable behavior carries over to leisure spending, as well. With many Americans ordering takeout to support local business – and with restaurants and bars reopening with limited capacity in some states – some patrons have changed their tipping habits. About 37% of consumers said they’re tipping more than usual due to the coronavirus pandemic, although 10% said they’re tipping less. 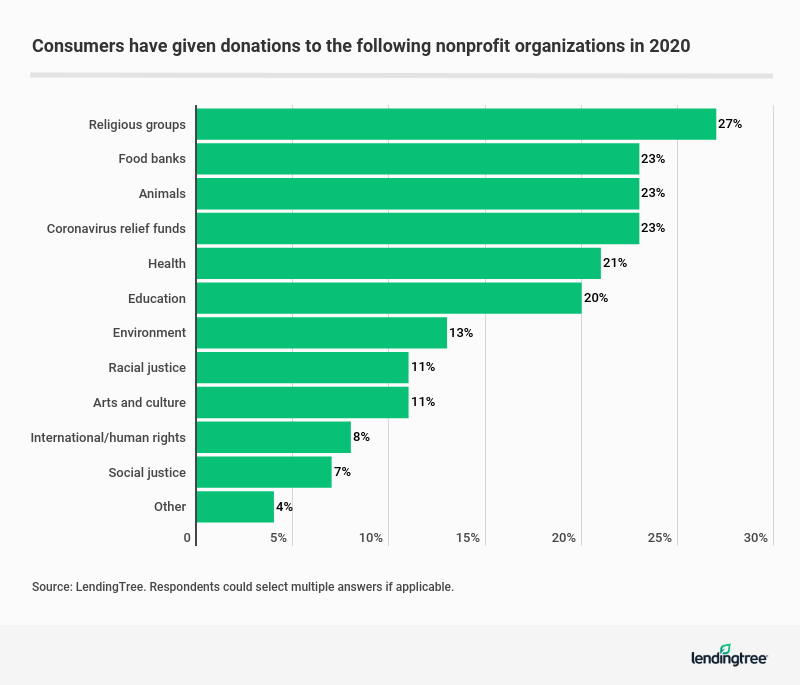 While many consumers have shifted their charitable giving habits to reflect the needs presented by the COVID-19 crisis, one thing still rings true: Americans donate to churches and religious organizations at high rates. It was the No. 1 cause that our respondents supported, with 27% of those surveyed saying they gave to a church or religious organization in 2020.

After churches, there was a three-way tie for second: 23% of respondents donated to animal welfare causes, coronavirus relief funds and food banks, respectively. Following close behind were health-related nonprofits, at 21%, and educational nonprofits, at 20%. Keep in mind that respondents were given the choice to select all answers that applied to their situation.

Other causes were less popular among consumers. Just 7% of those surveyed had given to a social justice charity in 2020, and 8% gave to an international/humanitarian rights organization. Just over one in ten (11%) gave money to either racial justice causes or arts and culture.

Both age and political affiliation had a clear impact on how consumers spent their charitable dollars. While the younger generations supported causes like coronavirus relief aid at high rates, older generations gave to churches and religious organizations more consistently. Although across the board, Americans gave money to animal welfare causes and food banks in significant numbers. 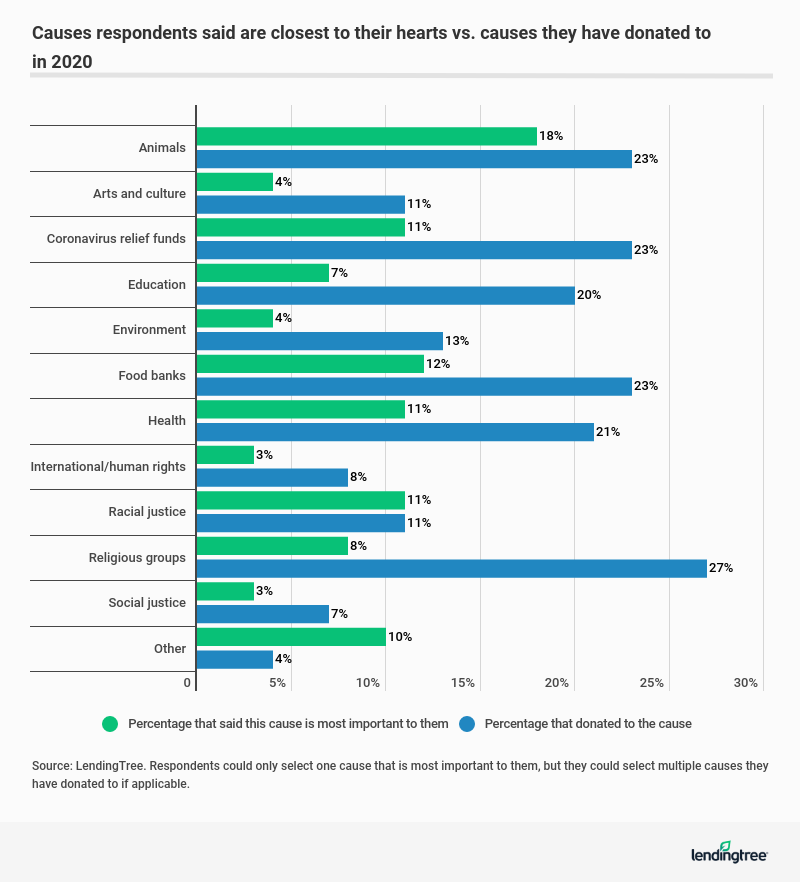 Just because someone feels particularly close to a specific cause doesn’t mean they’ll donate to that cause – and some people may feel obligated to give to charity even if it’s not a cause that’s close to their heart. The top five causes closest to Americans’ hearts are:

Interestingly, just 8% said religious groups are their biggest donating priority right now, despite the fact that it is consumers’ most-donated cause in 2020.

LendingTree commissioned Qualtrics to conduct an online survey of 1,020 Americans, with the sample base proportioned to represent the overall population. The survey was fielded June 12-15, 2020.