84% of Consumers Have Used Peer-to-Peer Payment Services, and Nearly a Quarter Have Mistakenly Sent Money to Wrong Recipient

Convenience is key in today’s fast-paced, technology-oriented world. With peer-to-peer (P2P) service apps like PayPal and Venmo offering simple ways to make digital transactions, it’s not much of a surprise that they’ve grown in popularity. Today, more than 8 in 10 (84%) consumers say they’ve used a P2P service.

But P2P apps don’t come without risks. Some users are losing money through mistakes and scams — and the most frequent users are at an increased risk, according to the latest LendingTree survey of nearly 1,200 U.S. consumers. Keep reading for more on what consumers know about P2P service liability, and how users can better protect their transactions.

PayPal is the most popular service among consumers (84%), followed by Venmo (49%). 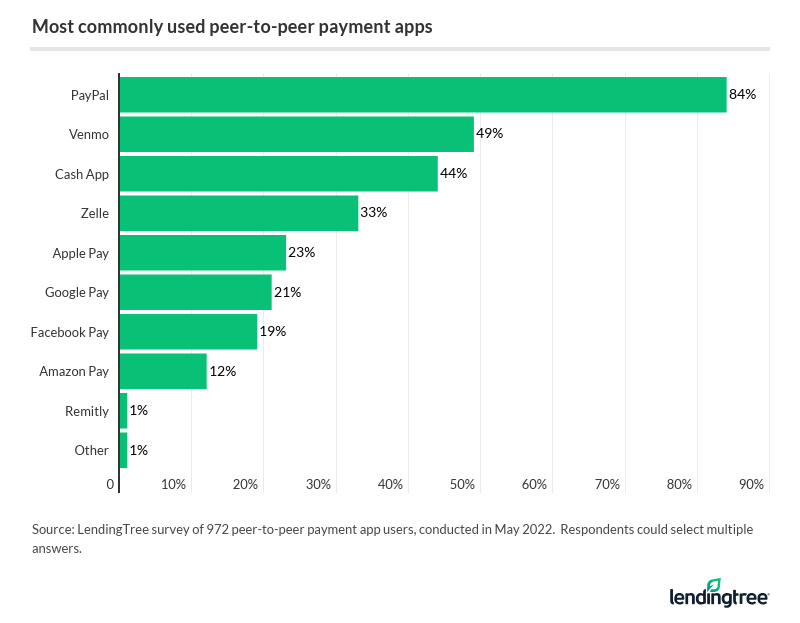 However, younger users are more inclined to use newer services. For example, 71% of Gen Zers on a P2P platform say they utilize Venmo, and 61% say so for CashApp.

Those who’ve used P2P services typically make frequent transactions — 44% complete one at least once weekly. And among younger users, that’s particularly true: In fact, 37% of Gen Zers and 36% of millennials use P2P services multiple times a week. While Gen Xers (ages 42 to 56) aren’t far behind (28%), just 7% of baby boomers (ages 57 to 76) report using P2P services as frequently.

Among the most common reasons people utilize P2P services, users are most likely to pay their loved ones (58%) or gift money (43%). Other common P2P transactions include:

For Gen Z users, however, food and dining (70%) is the No. 1 reason for utilizing P2P services; they’re also most likely to use it for purchasing clothing (50%). And while millennials are pretty in line with the averages for P2P payment uses, they’re most likely to utilize the services to make charitable donations (14%).

Although making a separate business account may not be required (some apps, like Venmo and PayPal, allow users to tag transactions as business payments), new IRS reporting requirements could spell trouble for some businesses during the next tax season.

The threshold for a 1099-K — the tax form used to report payments received by a business or individual for the sale of goods and services on a third-party network — is significantly lower than in previous years. P2P services are now required to send a 1099-K to those who report $600 or more in business transactions, for any number of transactions, on their apps. Previously, the threshold was $20,000 and more than 200 transactions in a calendar year.

It’s important to note that the reporting requirement doesn’t apply to most personal transactions or other amounts generally excluded from gross income. This includes:

If a P2P service provider isn’t able to identify all of a user’s business payments, those who don’t take the time to distinguish their business payments from their personal transactions run the risk of inaccurately reporting incomes on their tax forms.

While P2P services have jumped in popularity, most consumers (48%) say they haven’t heard of P2P service fraud, including 56% of baby boomers. But among other security concerns, scammers put P2P users at risk of losing money — particularly those who use these services several times a week.

Overall, 15% of those on a P2P platform have been a victim of a scam; for those who use these apps multiple times a week, that jumps to 22%. And for Gen Zers — the age group most likely to be frequent P2P users — the likelihood of having fallen for a scam is even higher at 29%. 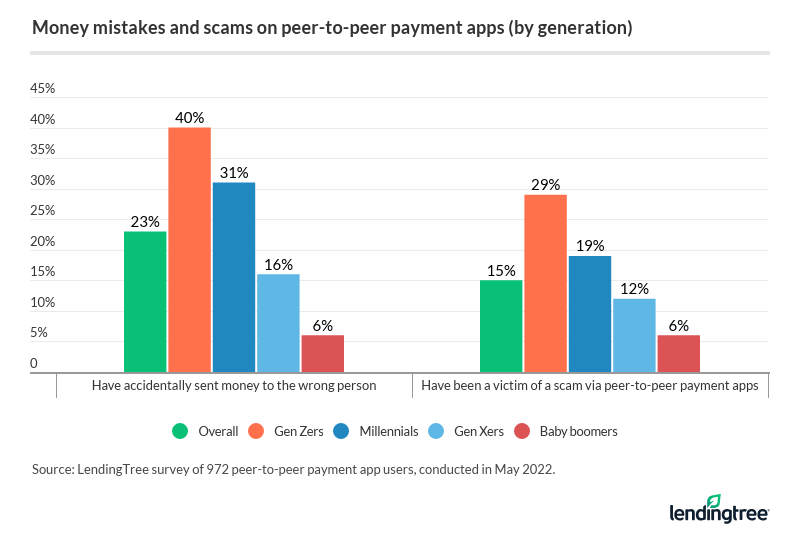 That’s not the only risk P2P services pose, as users are likely to make mistakes while completing transactions. In fact, nearly a quarter (23%) have sent money to the wrong person, which jumps to 40% among Gen Zers and 42% among the most frequent users. While a person is slightly more likely to get their money back than not (13% versus 10%), those who use P2P services multiple times a week aren’t so lucky. Just 19% of these frequent users say they got their money back, compared with 23% who say they didn’t.

This comes as 40% say they don’t make their transactions private. Because P2P services with social platforms often require consumers to send messages along with their payments, those who share their transactions publicly put themselves at increased risk of making mistakes or attracting scammers.

Venmo, which claims it doubles as a social networking platform, sets its users’ transactions as “public” by default — meaning many consumers may provide sensitive information without being fully aware of their actions. Notably, 6% of those on a P2P service app say they don’t know their privacy settings.

In addition to the security risks that come with P2P platforms, consumers should also learn how to spot the signs of a personal loan scam.

69% know users are liable for losing money, but only 44% believe they should be

Liability is a tricky matter. Technically, the Electronic Fund Transfer Act (EFTA) says P2P service providers must investigate most theft disputes filed within 60 days. But regardless of whether someone sent money to the wrong person or fell for a scam, consumers typically agree to be held liable for lost money when they accept a P2P provider’s terms and conditions. And while most Americans (69%) know that, only 44% believe users should be held liable. 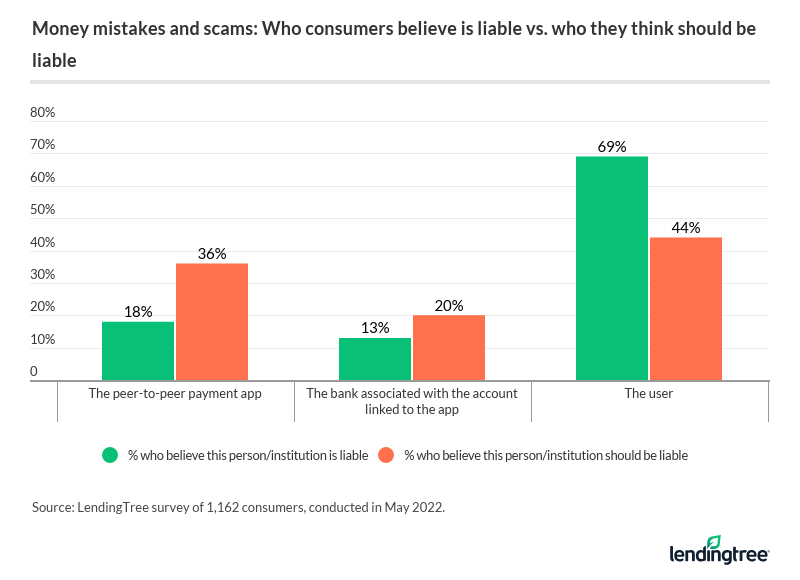 The Federal Deposit Insurance Corp. (FDIC) is responsible for providing deposit insurance for millions of Americans — and most significantly, it ensures a consumer’s money is protected in the unlikely event of an institutional failure. But while the FDIC insures nearly 5,000 institutions — many of which users can directly link to their preferred P2P platform — it doesn’t cover balances in third-party apps like PayPal or Venmo.

The FDIC doesn’t insure P2P loans, either — meaning consumers may risk significant losses if a platform or lender abruptly shuts down. While P2P investing is generally safe, be sure to choose a secure, transparent P2P loan platform.

Overall, 62% of consumers knew P2P balances aren’t insured by the FDIC. However, nearly half (49%) of P2P users who keep a balance in their accounts wrongly believe that their money is protected. 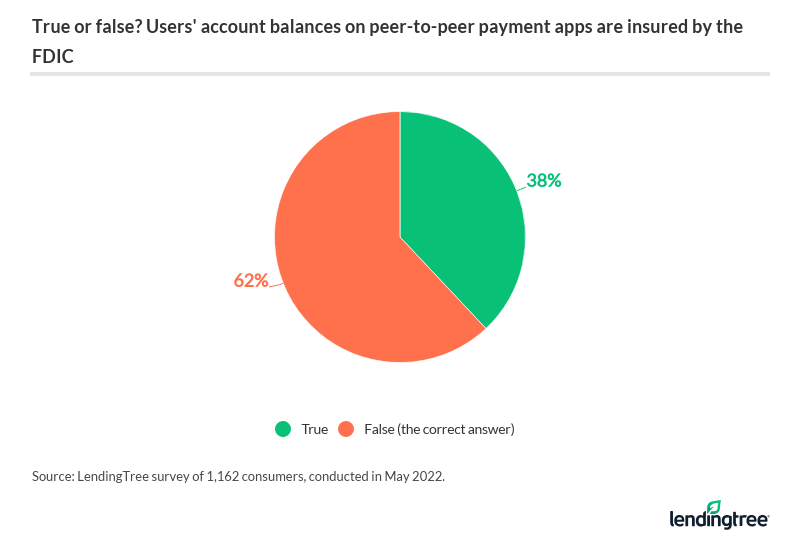 This comes as 52% of P2P payment app users say they keep a balance in their accounts — notably, 21% have a balance of more than $200. Those who use peer-to-peer services several times a week are most likely to do so, at 69% — 18 percentage points higher than the average consumer. Men (61%) and millennials (58%) are more likely to keep balances in their accounts.

Regardless of whether they know their balances are insured, the majority of users with account balances say it’s just easier to leave their money where it is (50%). This is particularly true of Gen Zers (60%), six-figure earners (57%) and men (57%). An additional 42% say they keep a balance to have money the next time they need to pay someone.

Nearly a quarter of P2P users with balances (21%) say they keep money in their accounts to avoid paying transfer fees. Gen Zers are also overwhelmingly more likely to keep a balance simply out of forgetfulness: 20% of this age group say they forgot to transfer their money to the bank, compared with the 10% average overall. 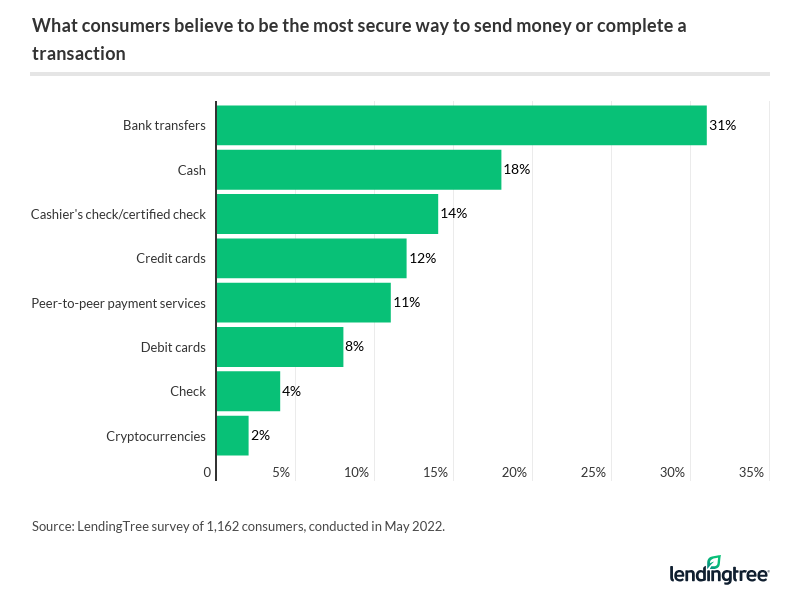 Among the 16% of consumers who don’t use P2P services, 18% say it’s because they don’t think P2P services are secure enough. That’s not the only security concern keeping consumers off of P2P platforms: 11% say that they don’t like that others can view their transactions, and an additional 5% don’t think there are enough consumer protections in place.

With most consumers believing traditional payment methods are safest, those who don’t use P2P services aren’t sacrificing much added convenience. Of this group, 35% say they’ve never been in a situation where their preferred payment wasn’t accepted — the second most popular reason for not using a P2P service. Meanwhile, 39% say they don’t know how to use P2P services.

While other payment methods are the best way to ensure your transactions are secure, you can take some measures to better protect your P2P payments. Matt Schulz, LendingTree chief credit analyst, offers the following tips for P2P users:

LendingTree commissioned Qualtrics to conduct an online survey of 1,162 U.S. consumers, May 16-23, 2022. The survey was administered using a nonprobability-based sample, and quotas were used to ensure the sample base represented the overall population. All responses were reviewed by researchers for quality control.

84% of Consumers Have Used Peer-to-Peer Payment Services, and Nearly a Quarter Have Mistakenly Sent Money to Wrong Recipient

Peer-to-peer (P2P) service apps like PayPal and Venmo offer simple ways to make payments, but some users are losing money through mistakes and scams.