As we usher in a new decade, it’s time to start planning the next steps of your financial journey. If you’re like many Americans, then you might be optimistic about what the 2020s have to offer ー even if you’re struggling with debt in the present.

To measure the confidence of American consumers for the decade ahead, LendingTree commissioned a survey of more than 1,500 Americans from Dec. 13-16, 2019.

More than half of Americans feel weighed down by debt

Every new year brings resolutions to improve our personal and, sometimes, financial wellbeing. But going into 2020, nearly 60% of Americans are feeling weighed down by debt. Nearly 22% of respondents are “completely” weighed down, while 37% feel “somewhat” weighed down. Even 47% of six-figure earners feel burdened by their debt.

Despite cumbersome debt, most are confident about the decade ahead: 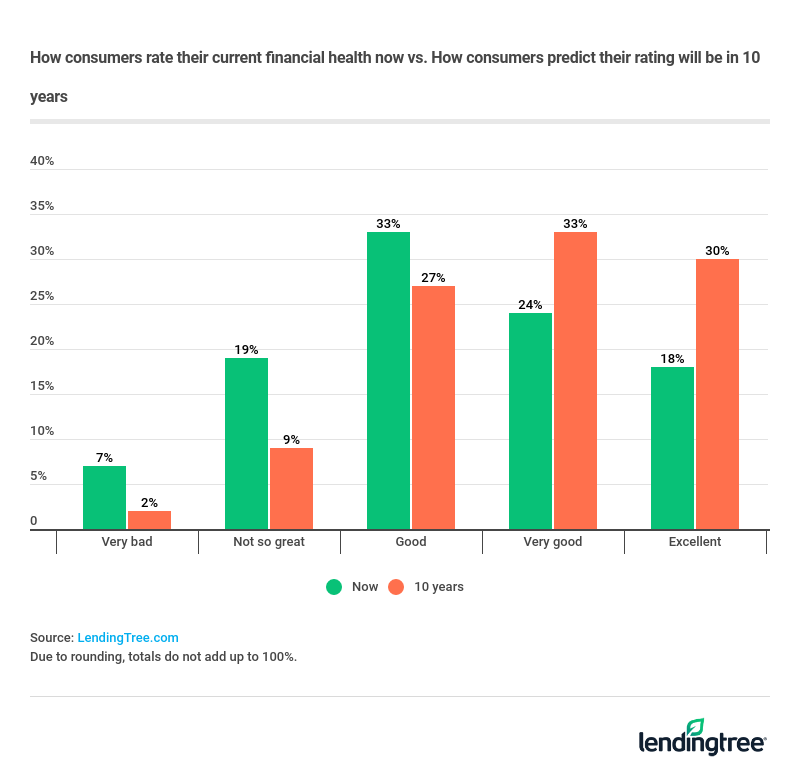 While 63% of consumers believe that their financial health will be either “very good” or “excellent” by the end of the decade, only 11% think that their finances will be “very bad” or “not so great.” That jives with another data point from our survey: Just 11% of people are pessimistic about their finances entering the new decade.

Across the board, credit card debt is a considerable burden on Americans. Here’s a breakdown of stress caused by debt type:

Note: Total may not add up to 100 due to rounding.

It’s interesting to note that even though mortgage debt is the largest source of debt for American families on average, people don’t feel burdened by it. That could be because mortgage debt is considered “good debt,” in other words, a type of debt that contributes to your financial future.

There are some clear generational divides when it comes to debt type. Student loan debt disproportionately affects millennials, while baby boomers were more likely to report feeling weighed down by medical debt. 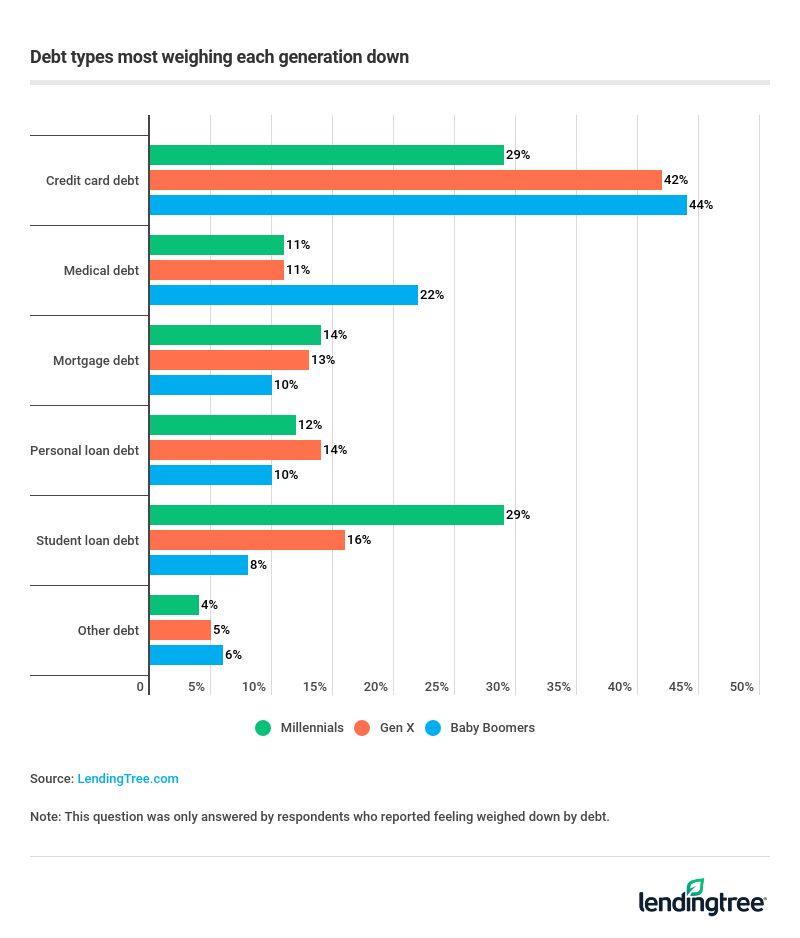 Women feel less confident about their financial future than men

Nearly 62% of men surveyed think they’ll get ahead financially in the 2020s, versus 44% of women who said they think the same way. Women also have less financial confidence in general than men, and they also feel less satisfied with their current financial situations, with 14% of women reporting their current financial situation as “excellent” compared to 21% of men. This shows that women are less optimistic about their finances now and in the future. The graph below tells this story: 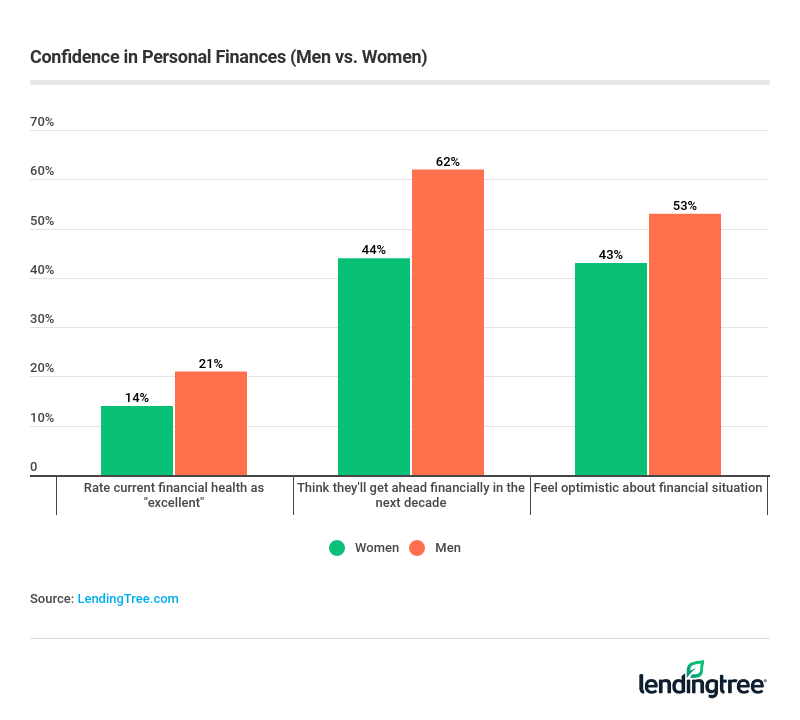 Financial confidence is split across generations

Although Americans as a whole are more optimistic than pessimistic about their financial futures, that enthusiasm is more prevalent among the generations of young professionals: Millennials and Gen Xers. Gen Zers, who are between the ages 18 to 22 in 2019, have a neutral outlook about their finances, perhaps because of their younger age. The silent generation is less neutral, perhaps because of their older age.

For both millennials and Gen Zers, 63% of each group responded that they think they’ll get ahead financially during the 2020s, which is 19% more than the population as a whole. They should: Gen Zers will enter into the workforce and millennials will advance their careers during the next decade, so their financial situations should improve, hypothetically.

Data suggests that financial optimism is split among party lines, too

It’s not productive to draw broad conclusions over political parties in today’s polarized climate, but here’s what the data shows:

Make of that what you will.

Our survey suggests that getting a bachelor’s degree pays off. Although student loans weigh heavily on millennials and Americans as a whole, those with a four-year degree are more financially confident than those without one: 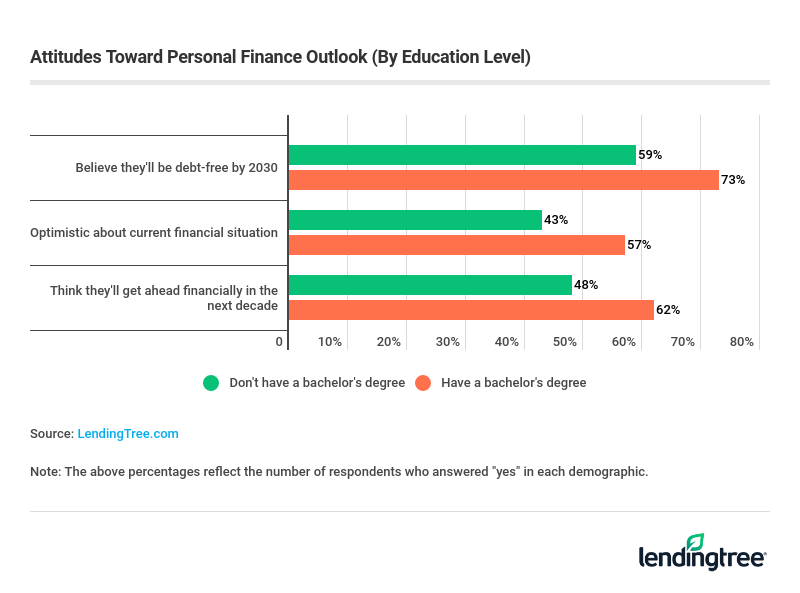 College-educated Americans feel more optimistic about their current financial situations, as well as their future wealth. They even plan to overcome student loan debt: nearly three-quarters of Americans with a bachelor’s degree believe they’ll be debt-free by 2030.

LendingTree commissioned Qualtrics to conduct an online survey of 1,552 American consumers, with the sample base proportioned to represent the overall population. The survey was fielded Dec. 13-16, 2019.

For the purposes of this survey, generations are defined by the following ages in 2019:

In this LendingTree survey of 1,500 Americans, we reveal how consumers feel about their money going into the new decade.