The coronavirus pandemic has caused massive waves in the U.S. economy, but that doesn’t mean Americans aren’t still considering big-ticket vehicle purchases. In fact, data from LendingTree’s marketplace shows that organic interest in car financing recovered in early April ahead of a dramatic rise. 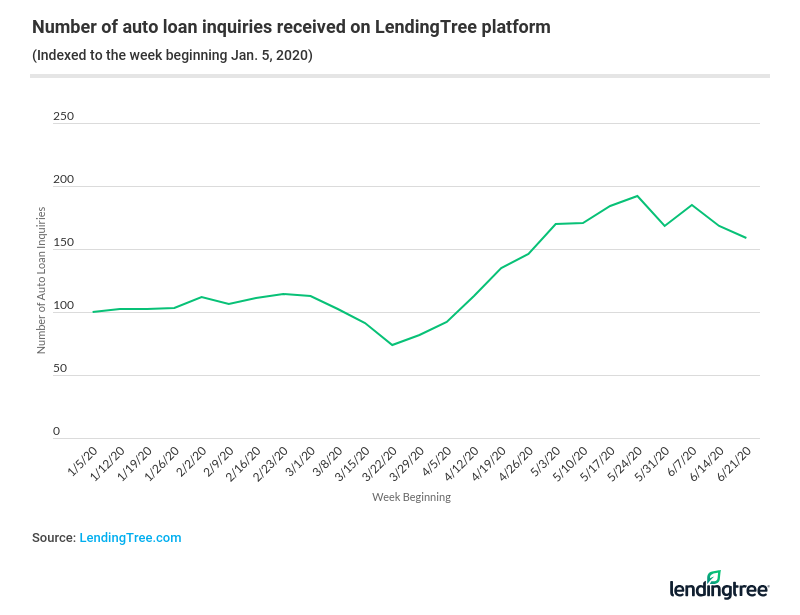 Average requested amounts steadily rose around the onset of the coronavirus pandemic until its peak of $21,388 the week of April 5.

Going back to the start of the crisis, the week of March 15 saw an almost $1,000 increase in the average requested amount from the week before. Down payments followed a similar trajectory outside of a slight drop in late March and early April, continuing its rise into April. 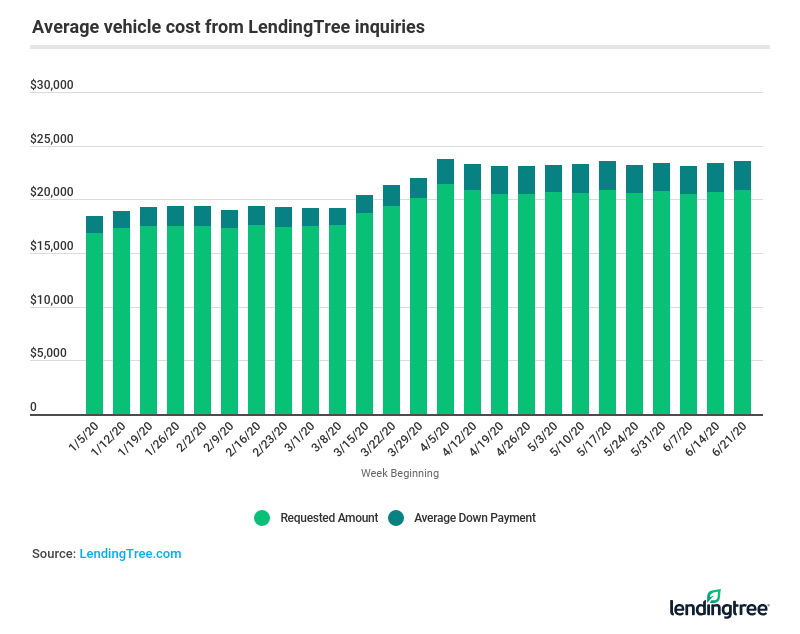 At least 46 states had shut down nonessential businesses by the beginning of April, when requested amounts hit their peak. The increase may have been due to a rise in demand as public transportation became less desirable and travel options were limited.

Another key factor could have been the government coronavirus relief checks, which were first issued in mid-April and could have served as down payments.

Consumers who can offer larger down payments can often find better deals. Car sales tend to be slow the first few months of the year after holiday-season spending, Jones said, but interest picks up in March, which coincides with tax refunds rolling in.

Loans more affordable for prospective borrowers across board

The drop in average offered APRs across credit categories — prime, midprime and subprime — began around the onset of the pandemic. But that downward trend didn’t stick. At the beginning of April, offered APRs increased. 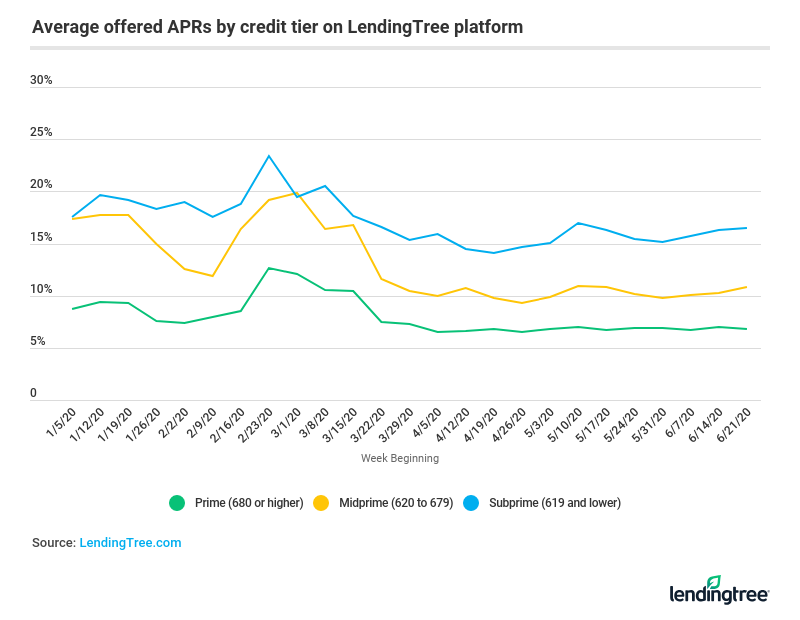 Prospective borrowers in the midprime — 620 to 679 credit score — range saw APRs drop from 16.73% the week of March 15 to 11.55% the week of March 22. This was a decrease of almost 31% immediately after the second emergency rate cut by the Federal Reserve, when the federal funds rate fell to near zero.

Of note, midprime and subprime — 619 credit score or lower — average offered APRs were almost identical at the start of 2020, while there was an almost 6 percentage-point difference by the end of June. The average offered APR for prospective prime borrowers — 680 credit score and higher — has come down by almost 2 percentage points compared with the beginning of the year.

The end of March saw a rise in interest for individual sellers and dealers. Since then, this gap has only widened. 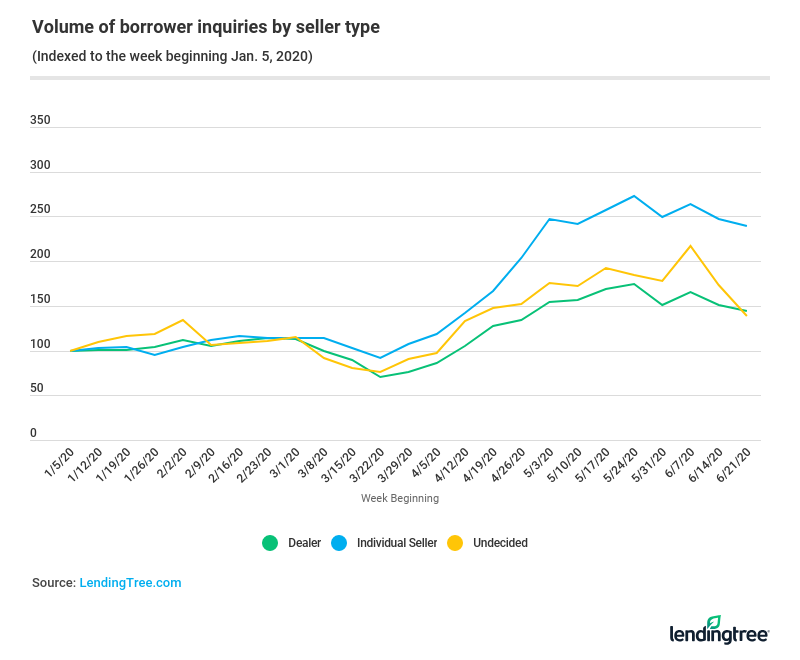 Individual dealers only saw about a two-week drop-off before big increases beginning in late March through early May. So although dealer incentives played a role in new-car purchases, so did the rising volume of individual sellers.

It’s also worth noting that dealers accounted for the largest share — by far — of queries on the LendingTree platform. 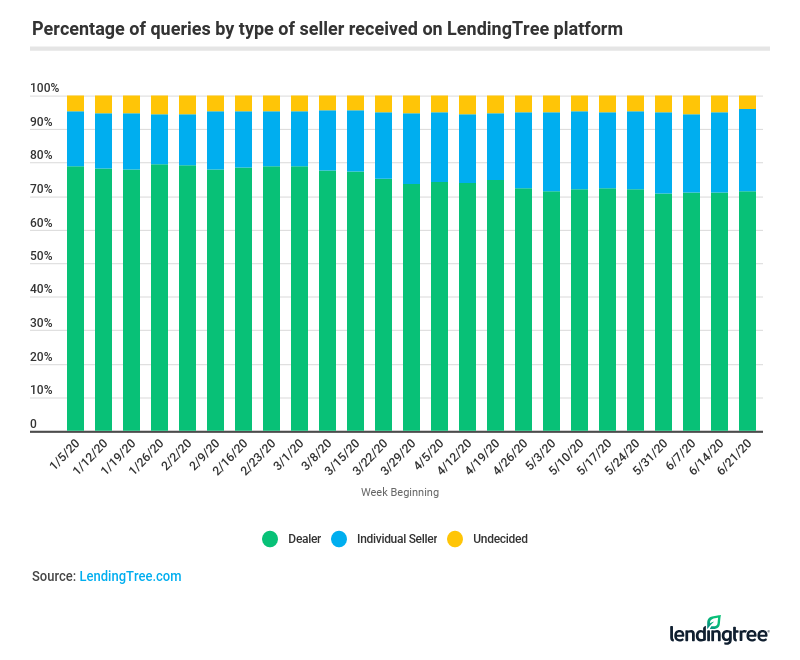 Historically, car-buying inquiries tend to pick up in March through the end of summer. But that may not hold true this year, Jones said.

“I don’t see the volume of borrower inquiries shooting up again like it did in April and May,” she said. “Not only were people who wanted to buy a vehicle suddenly able to — the great deals pulled demand forward — [but] people who might have completed a purchase later in the year had incentive to buy [earlier].”

Car-buying tips during the coronavirus crisis

Analysts aggregated weekly data from anonymous auto loan inquiries from Jan. 5 through June 27, 2020. The count of inquiries was limited to those received through organic search or offline advertising as changes to online marketing strategies can alter the number of inquiries received. These counts were indexed to the week beginning Jan. 5. All results were limited to queries on car and light truck purchases.

Data from LendingTree’s marketplace shows that organic interest in car financing amid the coronavirus crisis recovered in early April ahead of a dramatic rise.