42% of Car Buyers Who Financed Their 2020 Purchase Didn’t Compare Rates, but Here’s Why You Should

More than 4 in 10 buyers who financed a vehicle purchase this year didn’t shop around to compare rates, according to the latest LendingTree survey. But by comparison shopping, buyers could lower their monthly payment and the total amount they owe for the vehicle.

We surveyed 2,075 Americans to gain insight into how they bought and sold cars in 2020. Of those who bought a car this year, 38% decided to spend less than planned, while 20% said they spent more. For those who took out an auto loan, 43% got a rate much better than expected. Here’s what else we learned.

More than half of buyers (55%) who purchased a vehicle in 2020 took out an auto loan, and 58% of them said they compared multiple auto loan offers when purchasing their vehicle. 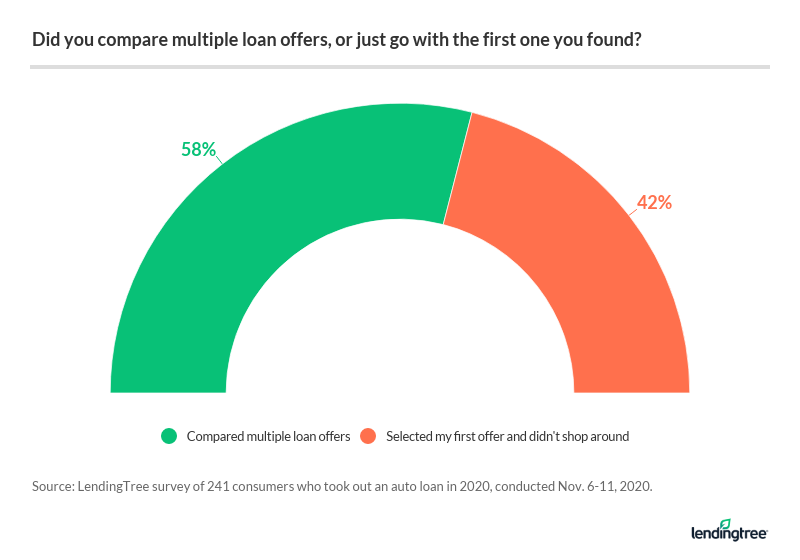 Shopping around for the best auto loan rates can potentially save car buyers thousands of dollars over the term of the loan, depending on the purchase price. This is true whether buying from a dealer, private seller or online auto site.

“Consumers don’t realize how much power they have” when they research financing on their own, said Jenn Jones, LendingTree’s auto expert, noting how potential car buyers can walk into dealerships armed with rates from other lenders. “Comparing rates gives them the power of negotiation and power of choice.”

Gen Xers (73%) were most likely to compare multiple loan offers, compared with:

Meanwhile, men (64%) were more likely to shop around for multiple offers than women (50%).

As for the auto rates they received, 91% were satisfied. Of that group, 43% said they got a much better rate than expected.

Gen Xers (48%) were more likely to get a better rate than expected, compared with:

Of those who took out an auto loan and got a worse rate than they expected, 16% make less than $25,000 yearly.

Overall, 97% of buyers were at least somewhat satisfied with their decision to purchase a car, including 73% that were definitely satisfied. Of note, 8% of Gen Z buyers regretted their decision — the highest of the generations.

Nearly 1 in 10 Americans bought a car during pandemic

Nearly 1 in 10 Americans bought a new or used car this year in or after March (up until when the survey was conducted in early November). Of 2020 car buyers, 61% of the baby boomer purchases came amid the coronavirus pandemic.

38% spent less on car than originally planned because of pandemic

Nearly 2 in 5 buyers spent less on their car than they originally planned, but 1 in 5 ended up spending more. Another 41% said the pandemic didn’t influence their spending decisions either way. 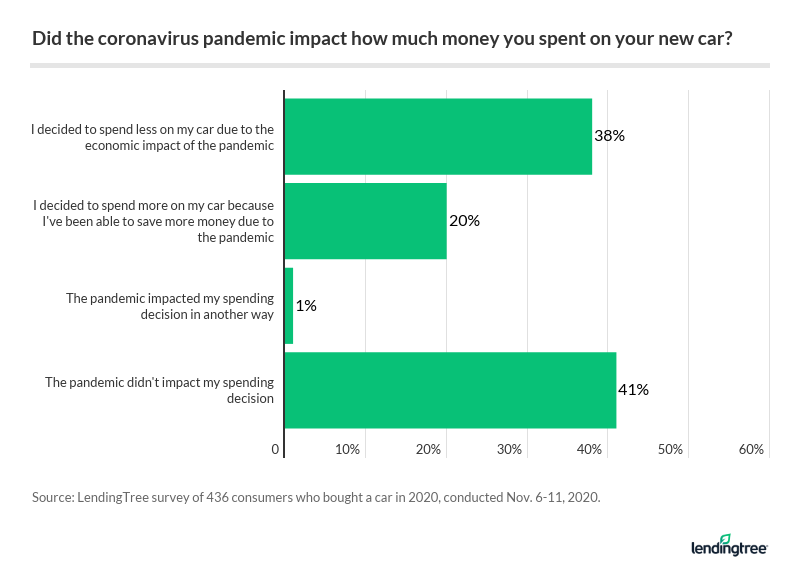 More than a quarter of buyers who make $75,000 or more said they spent more on their car than originally planned because they’ve been able to save more money during the pandemic. Meanwhile, just 12% of consumers making less than $25,000 said the same.

On the other side, 54% who were laid off or furloughed said they spent less.

Check out our auto loan calculator

“Cars are expensive, so it makes sense that when families have to tighten their belts they choose to spend less,” Jones said.

Jones also noted several car-buying trends of the pandemic era. Two-car families — whether because they’re working from home or another related situation — may have downsized to one car. Many car buyers bought larger SUVs or pickup trucks, a popular choice in this time. And with public transportation being seen as less safe, some people have opted to drive to work instead, Jones added.

The top reason people bought a new car in 2020 was they were simply ready to upgrade (28%). But 26% said they wanted to take advantage of special deals or rates amid the coronavirus crisis. 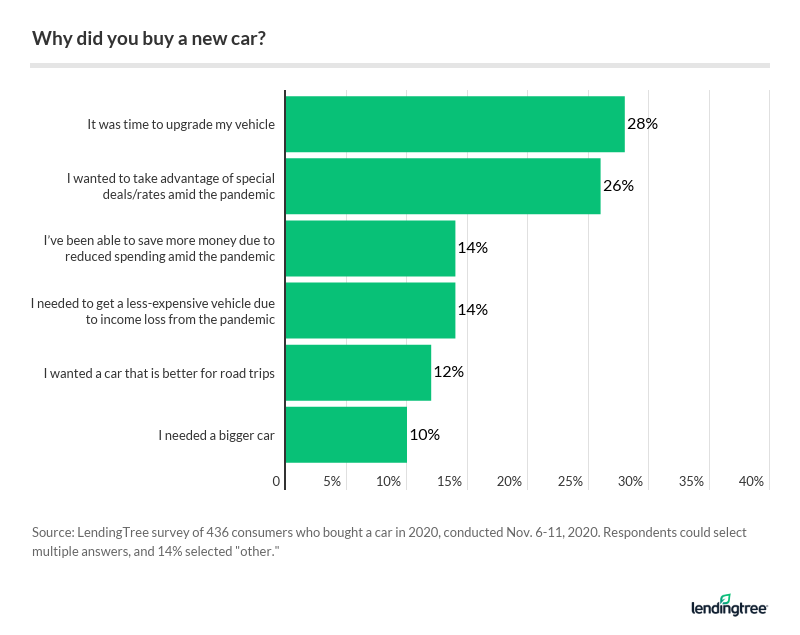 Gen Zers and millennials most wanted to take advantage of special deals or rates, while more Gen Xers, baby boomers and members of the silent generation said it was time for an upgrade.

About 1 in 7 on purchasing car during pandemic: Never mind 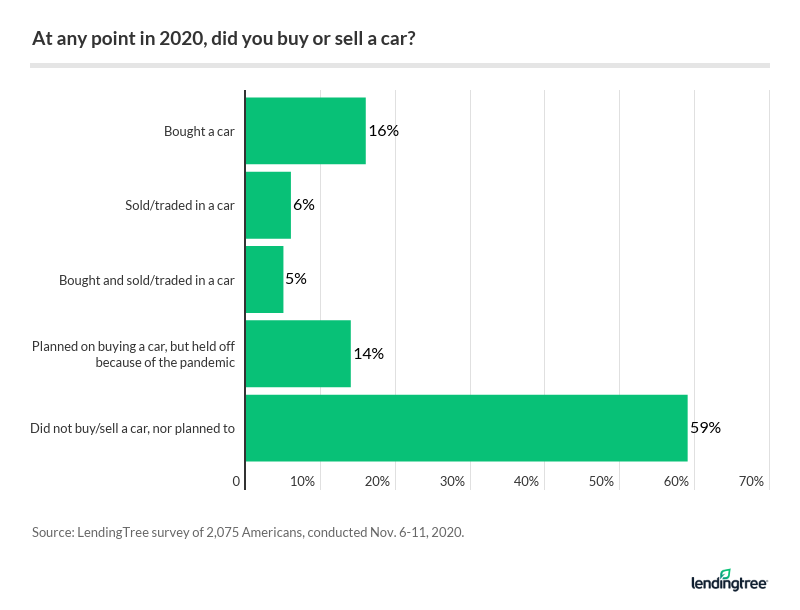 Among those who changed their minds were people whose incomes had been impacted by the coronavirus pandemic:

Gen Zers (39%) and millennials (36%) were more likely to buy or sell than older consumers. Meanwhile, those laid off or furloughed were nearly three times as likely to sell a car (19%) than those who didn’t experience income loss due to the pandemic (7%).

Car buyers generally split on what they buy (new, used or certified pre-owned) but not on where they buy (dealerships)

Each segment — new, used and certified pre-owned — was chosen by around one-third of the buyers, though new cars (37%) were slightly ahead.

Certified pre-owned cars meet age and mileage criteria and have undergone a thorough inspection by the dealer. These cars generally come with a factory warranty and may qualify for a lower APR than a regular used vehicle, but they tend to cost more than similar used cars.

Gen Zers (39%) were the most likely to turn to certified pre-owned cars, while baby boomers (41%) sought used cars.

Purchase-wise, about half of buyers bought in person from a dealership, while 5% did so online. 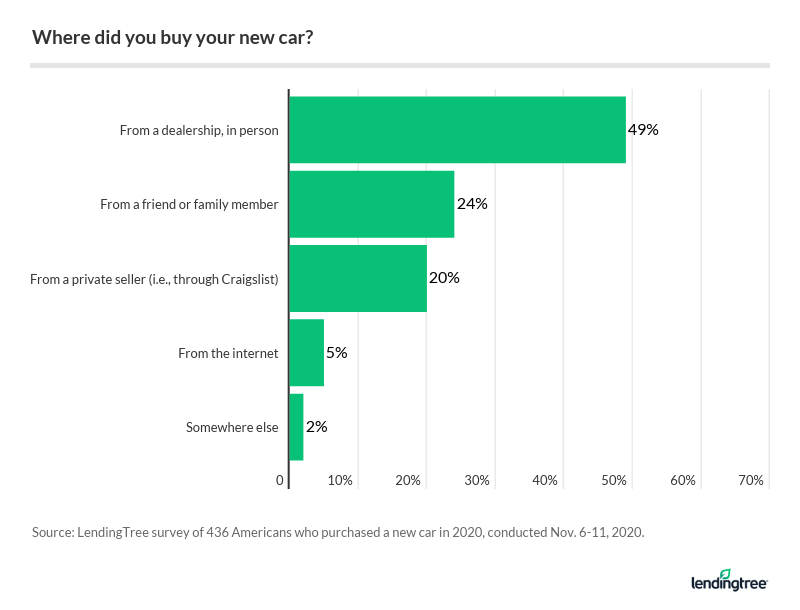 Pandemic precautions led more people to complete at least some of the process of buying a car online rather than through a dealership. Of those who bought their car online, the majority (70%) completed all steps of the car-buying process virtually. Separately, 60% said this was their first time buying a vehicle online.

45% who sold car needed money because of coronavirus crisis

Of those who sold their cars in 2020, the majority (58%) did so during the pandemic. As for their reasons, 45% did so because they needed the money.

Nearly 6 in 10 Gen Zers said they needed the money from the sale due to the pandemic, compared with:

Lastly, most (38%) sold their car to a dealership through a trade-in. As for other methods:

Gen Zers (14%) embraced car-buying businesses the most, while baby boomers had the highest percentage of those who turned to private sellers.

Consumers who trade their car into a dealer are likely to get less money for it, Jones noted, but they don’t have to handle the hassles of showing the car to buyers and transferring ownership.

“You’re basically paying the dealer to sell it for you,” she added.

LendingTree commissioned Qualtrics to conduct an online survey of 2,075 Americans, with the sample base proportioned to represent the overall population. Of the total sample size, 436 had bought a car at some point in 2020 and 237 had sold a car during the same time frame. The survey was fielded Nov. 6-11, 2020.

42% of Car Buyers Who Financed Their 2020 Purchase Didn’t Compare Rates, but Here’s Why You Should

We surveyed 2,075 Americans to gain insight into how they bought and sold cars in 2020.