The morning and evening commute to work is usually the most dreaded part of any job. The idea is to get from point A to point B as fast and as painless as possible. But, as we all know, this is rarely the case. Rush hour traffic can quickly turn a good day into a bad one. But aside from the psychological “costs” of the morning commute, it is also an important financial question.

Some commuters are constantly weighing their options to determine whether or not it is more cost effective to drive or take public transportation. Some public transportation is cheaper, but you have to rely on schedules and frequent delays. Driving gives you more independence, but owning a car is much more expensive.

Since there are various types of transportation available in all major cities, we decided to look at the cost of each. Using the average twenty-two work-day month, we broke down the costs for each major transportation mode to determine how much it costs to commute in major U.S. cities.

Here are the major findings: 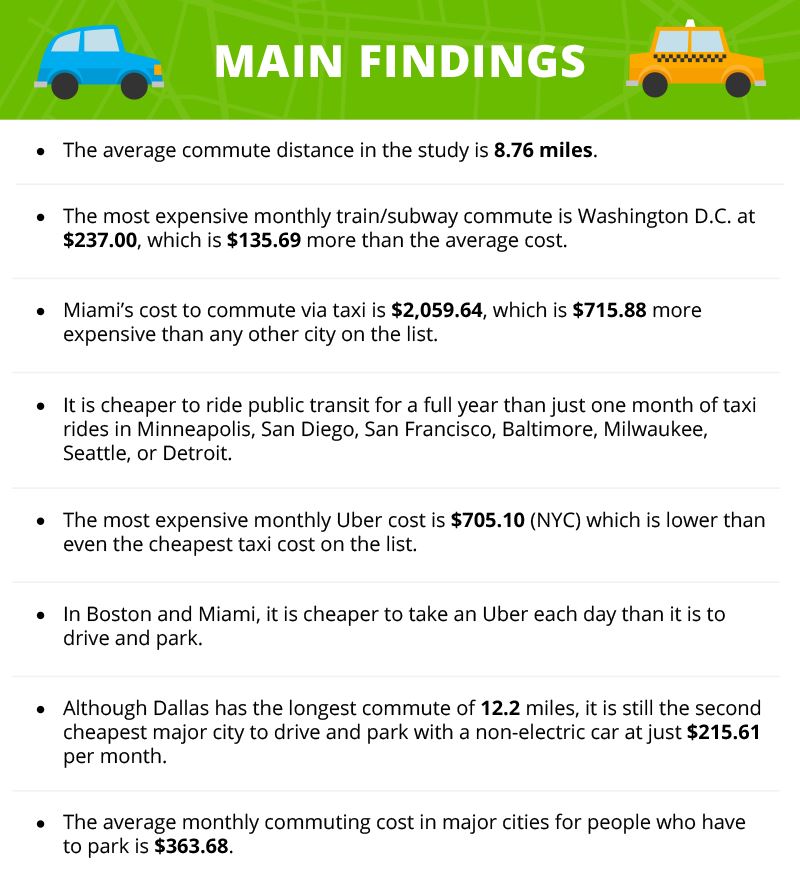 Breakdown of the Commute Distance

Using commuter research from The Brookings Institution, we first looked at the commute distances for each of the cities in our study. Houston and Dallas both came out on top at 12.2 miles. Boston, not available on the Brookings data, was sourced from this commute map from I Like Big Bytes, and came to an average of 5.6 miles. 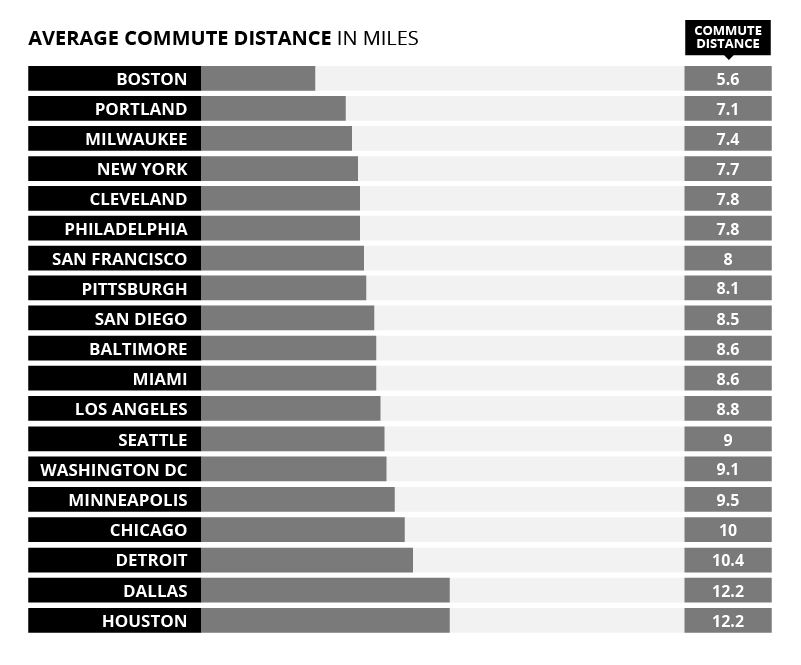 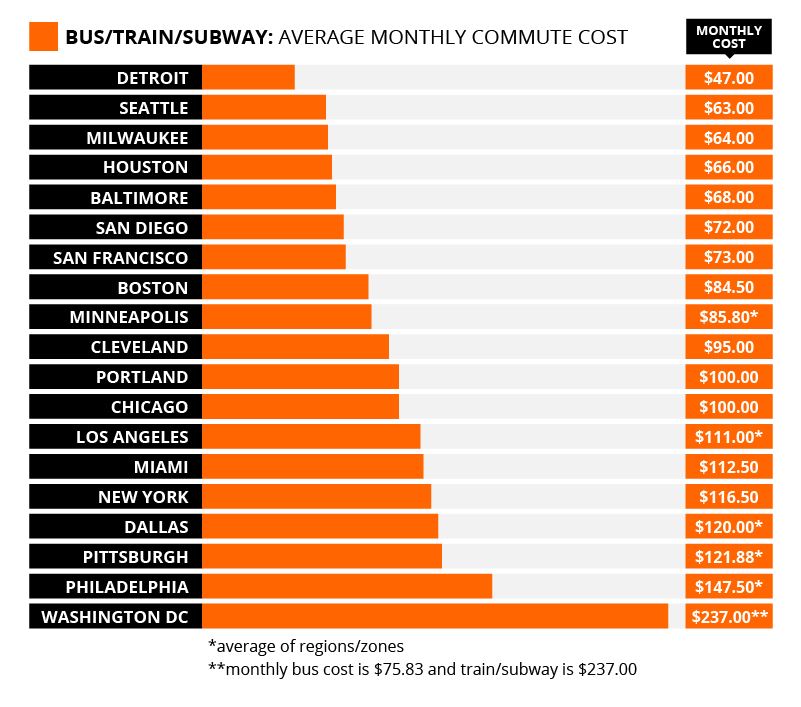 Some of the more populated cities in the U.S. rely heavily on public transportation. All prices were taken from each city’s public transportation website. Our nation’s capitol, Washington D.C. leads the group in cost for train/subway rides at $237. (D.C. was also the only city where a monthly bus cost differed from the train and subway.) The highest bus/train/subway is Philadelphia at $147.50, which is the average cost of the zones for a monthly Trailpass. The lowest is Detroit at $47. Their single ride tickets are also the lowest of any city in the study at $1.50.

Also, some of the cities in the study required different amounts for monthly passes based on zones or regions (as mentioned above for Philadelphia). In these cases, an average cost was taken based on the zones or regions designated on the respective metro sites. Theses cities include Philadelphia, San Francisco, Pittsburgh, Los Angeles, Minneapolis, Houston, and Dallas. 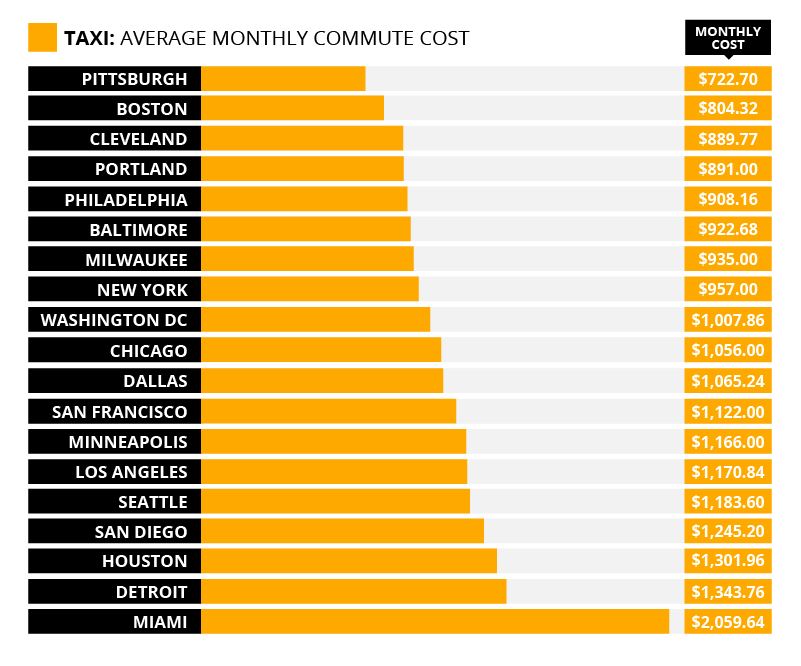 Taxi prices were taken calculated using values from Taxi Fare Finder (and Numbeo for Los Angeles). Each value factors in a round trip for twenty two days. The base taxi fares for every city ranged from $2.05 in Baltimore to a $4.00 in Chicago. Then the price per mile for each city was added based on the commute distance. 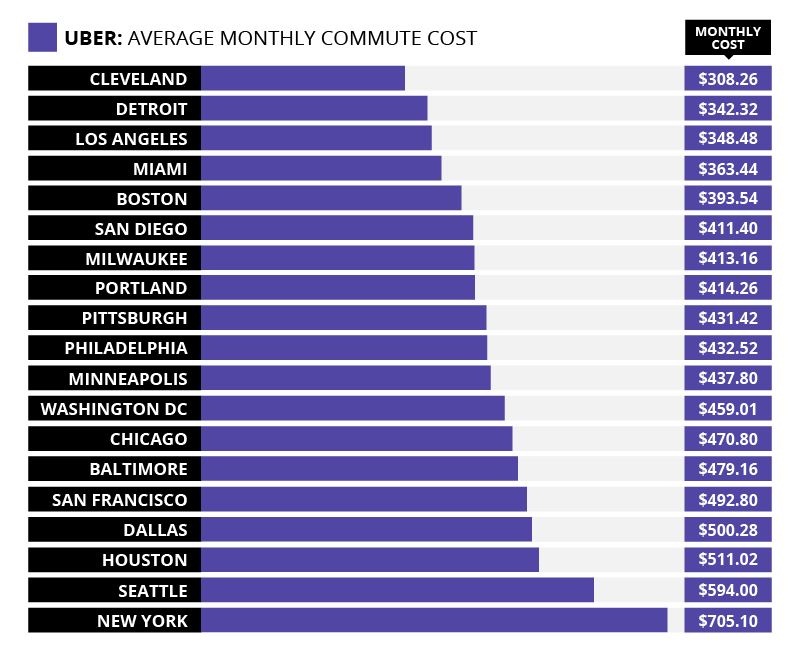 These Uber prices were taken from Uber’s own Fare Estimate website where it gives the base fare and per mile prices for UberX. Each value is based on a round trip for twenty two days for every city’s commute distance. New York City tops the list at $705. They have both the highest base fare ($2.55) and price per mile ($1.75). The second cheapest city on the list, Los Angeles has no base fare and costs only $.90 price per mile.

The one factor that comes into play with Uber is their surge pricing, which could sometimes double the rates. Even so, it is no wonder the Uber is gaining so much ground on taxi cabs, looking at the numbers, the most expensive Uber ride is still lower than the cheapest taxi commute with the exception of Philadelphia, Chicago, San Francisco, and New York. 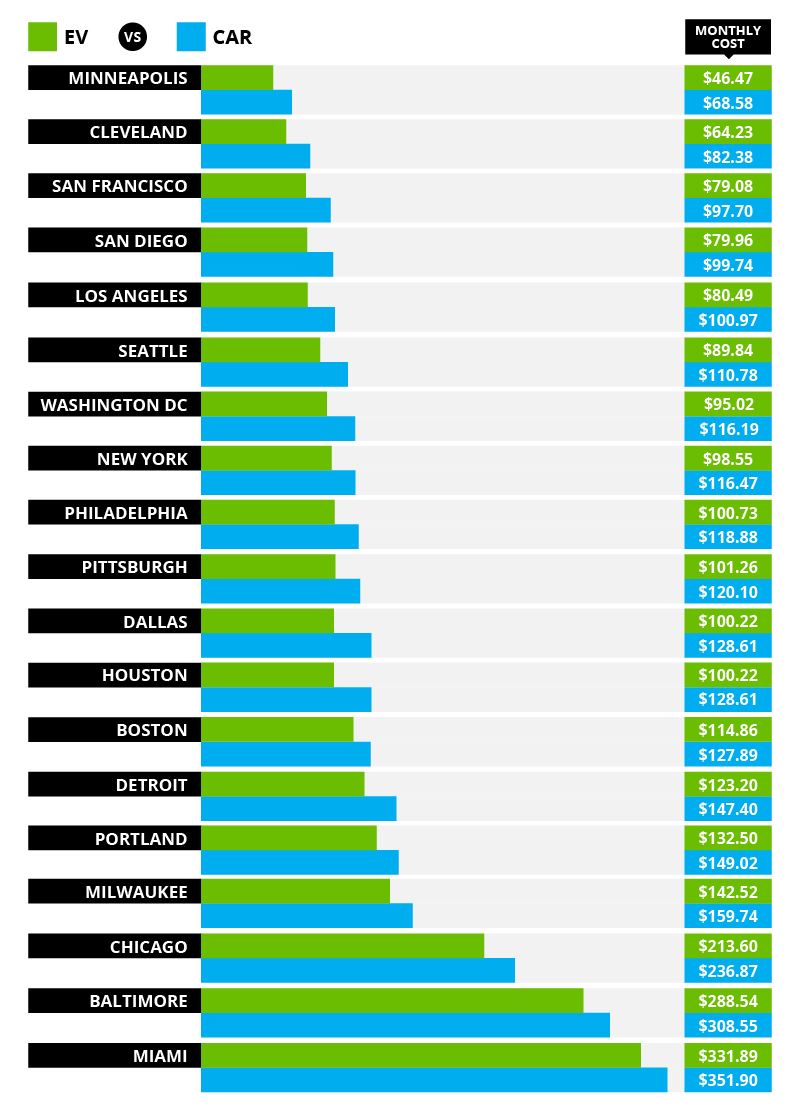 Car VS EV (no parking fee)

When it comes to car costs, there are many factors in play. First, we gathered the combined the cost of registration and title fee for a car from each state’s DMV website. Next, we found the average gas price of each of our cities using AAA state gas prices of $2.35. Using a study from the University of Michigan, we found an average mpg for the typical car of 25.3. So, the estimated cost per mile is $0.09.

Electric vehicles used the same commute distance, but instead of gas prices, we calculated the cost of charging the car. Using a statistic from the U.S. Department of Energy, they calculated an average $0.11 per kWh and the average electric vehicle gets 34 kWh per 100 miles, so the estimated cost per mile is $0.04.

Although Miami’s commute distance is just below the average of 8.75 miles at 8.6, they top the list because the vehicle registration cost in Florida is $239.50. Compare this to Minneapolis, the lowest city on the list and you’ll see that it costs an estimated $16 according to the Minnesota DMV.

Like Minnesota, not all of the fees in every state are fixed, so in those cases, we had to take an average estimated registration fee. 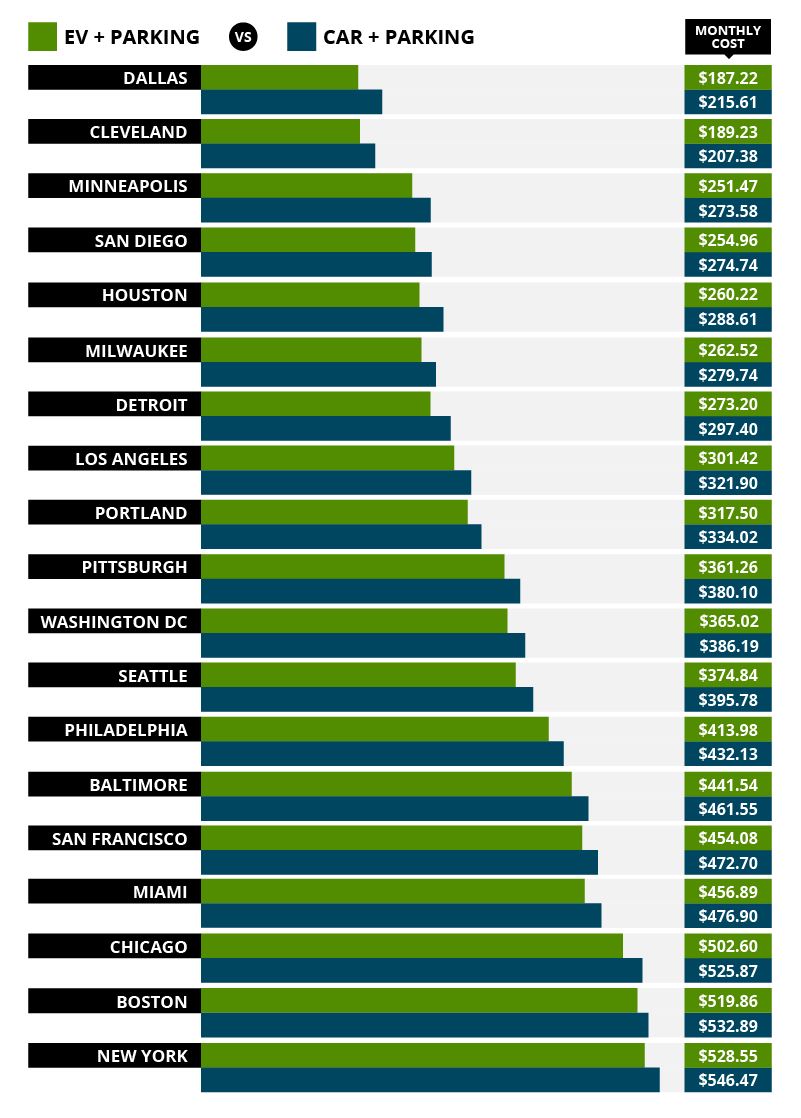 For many drivers, free parking is not an option in their morning commute. This chart outlines the cost of car ownership with the additional cost to park in a garage. Median parking costs were taken from a study by Colliers International. New York tops the list with a monthly parking rate of $430. Boston is not far behind with a rate of $405. Miami still ranks high based on their registration fees alone, because parking is only $125. The lowest on the list, Dallas, only costs $87 per month.

A few cities weren’t available on the Colliers study, and we looked at averages from Best Parking for Baltimore, Minneapolis, Pittsburgh, Cleveland, and Detroit. and Urban Milwaukee for Wisconsin. 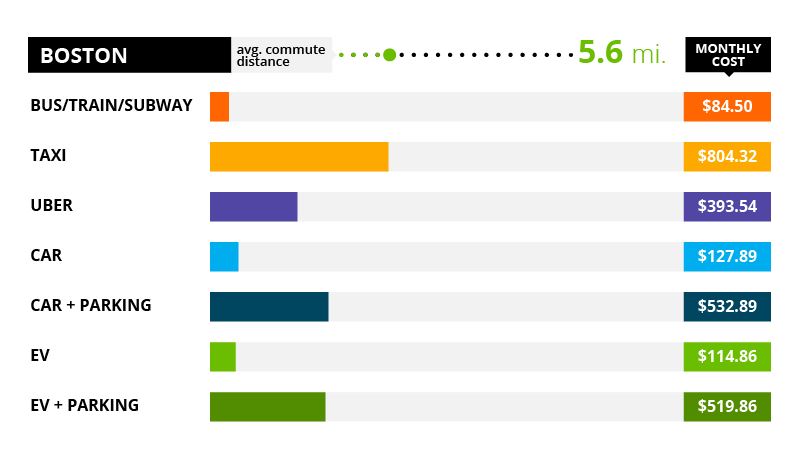 One of the themes of this report is that taxi prices are always the highest cost. Boston has the smallest average commute distance but the taxi price is still the highest by about $270. The cheapest option is the bus/train/subway. It is also cheaper to take an Uber every day than it is to park in a garage in Boston. If you can get free parking, a car commute is also on the cheap side, but Boston also has notoriously bad traffic. 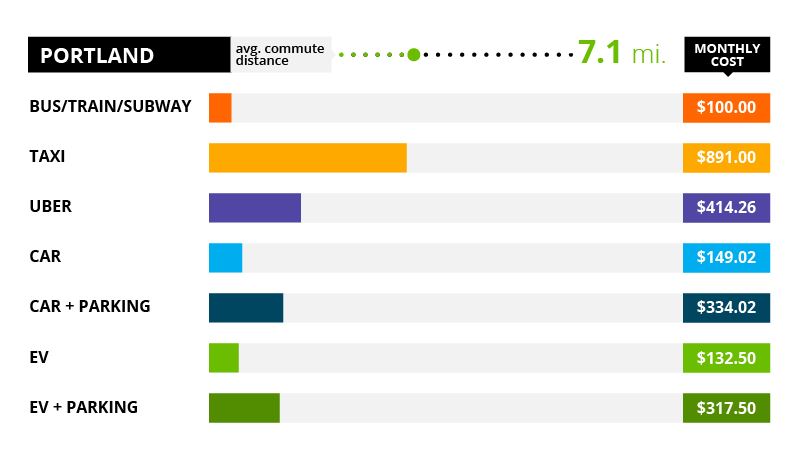 Portland public transportation is also cheapest with a monthly pass at $100. Taxi prices are more than double the price of an Uber. However, you can drive and pay a monthly parking garage fee and it will be cheaper than Uber. 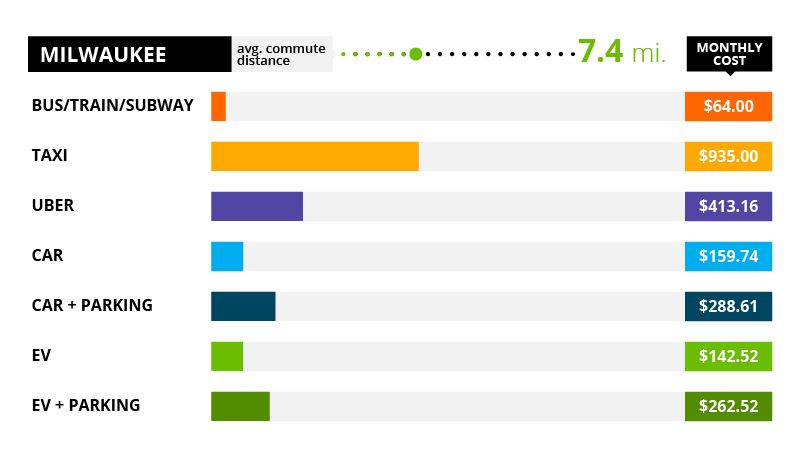 Milwaukee’s $64 monthly pass for public transit is one of the cheapest on the list. It still costs more than twice as much to taxi into work every day than it would taking an Uber. 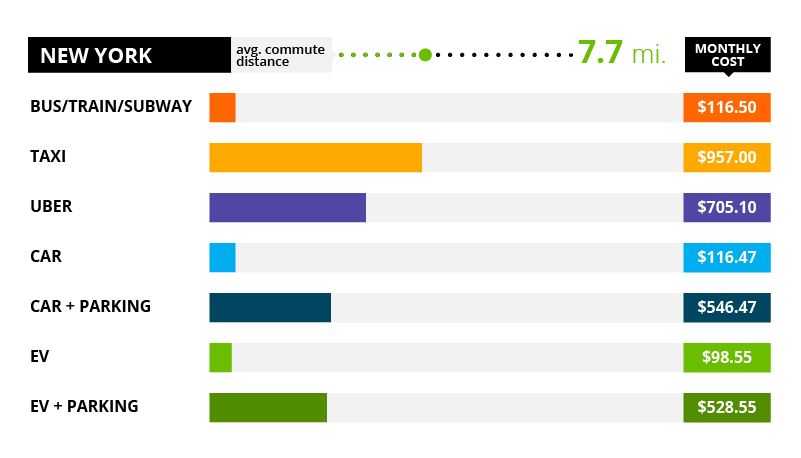 New York has the highest parking costs in this study at $430, which alone is higher than more than half of the Uber costs for half of the cities in this study. Given New York City’s rich history and connection to the taxi cab, the prices are still fairly low, but this can be attributed to it having the third lowest commute in the study. 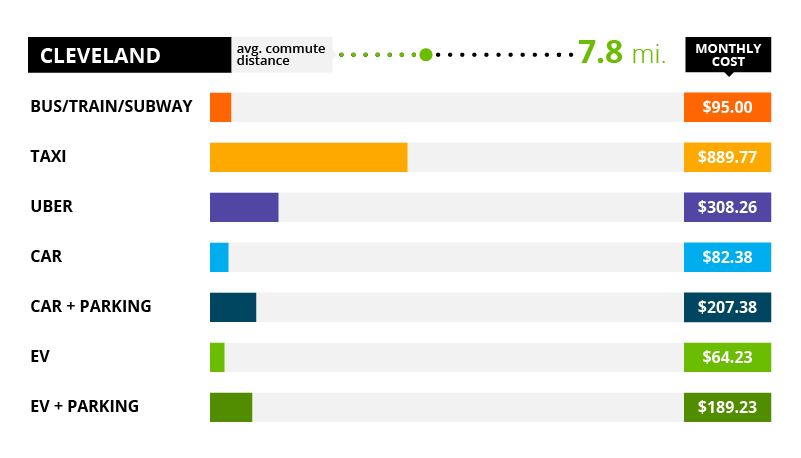 Cleveland has some of the lowest commuting costs across the board. They are lowest in Uber costs, second in car and EV and third in taxi cost. (Their sports teams are also some of the best right now.) 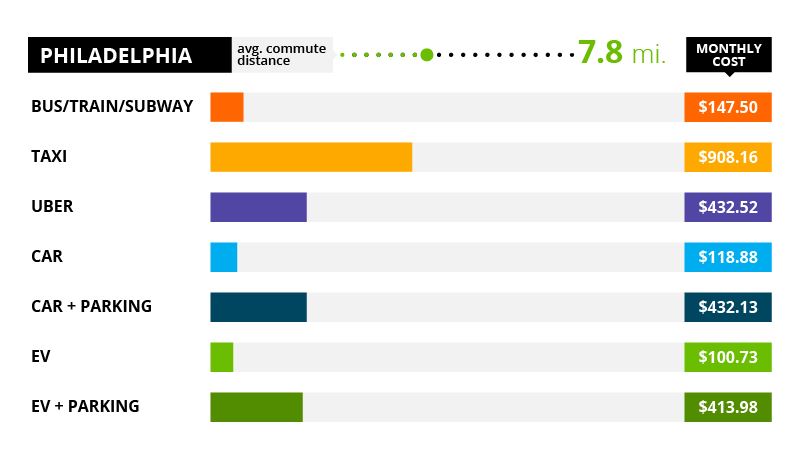 Aside from Washington D.C., Philadelphia has the highest cost for public transportation. The $147.50 is an average of zone costs based off of their SEPTA site for a monthly Trailpass. Average parking costs in Philadelphia are also some of the highest at $313.25, making the cost to Uber and the cost to drive with parking garage just about the same. 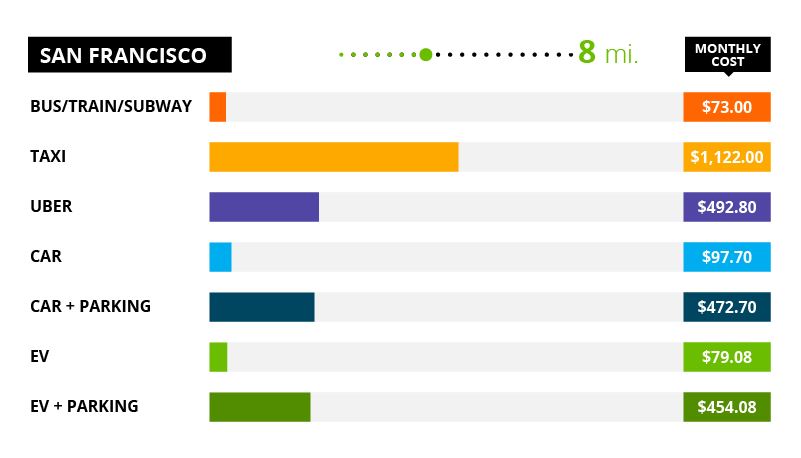 In San Francisco, it almost costs more for a monthly public transit pass than it would to drive an electric car in every day (if you can find free parking). The birthplace of Uber is still the fifth highest in the study. 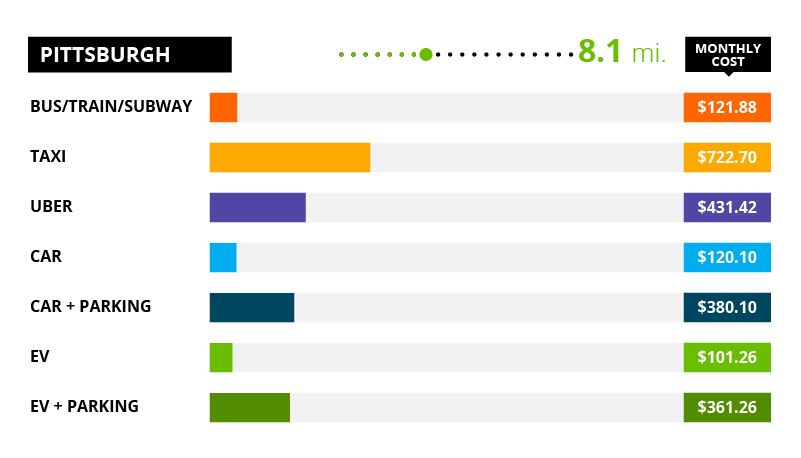 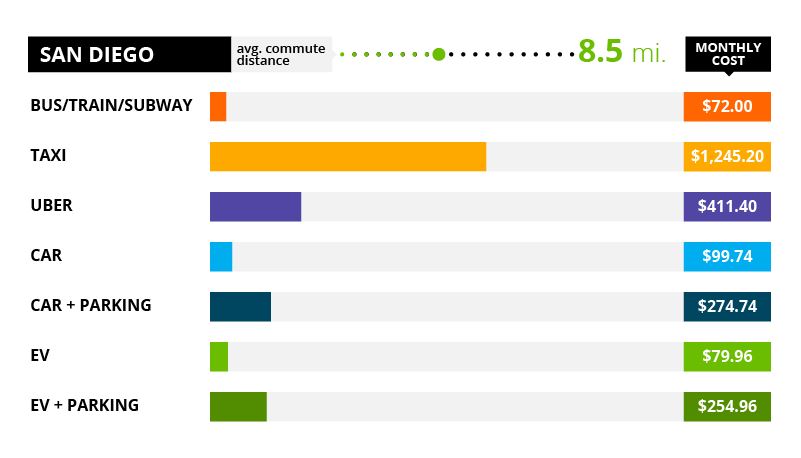 San Diego has one of the highest taxi costs in the study at $1,245, almost three times as much as it costs to Uber. 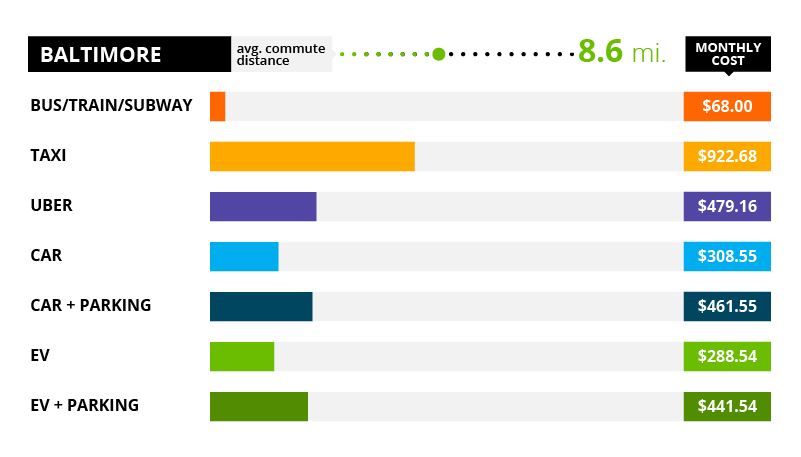 Baltimore has the fourth lowest cost for public transportation. The vehicle registration fee of $135 and title fee of $138 make the car commuting alone some of the most expensive. 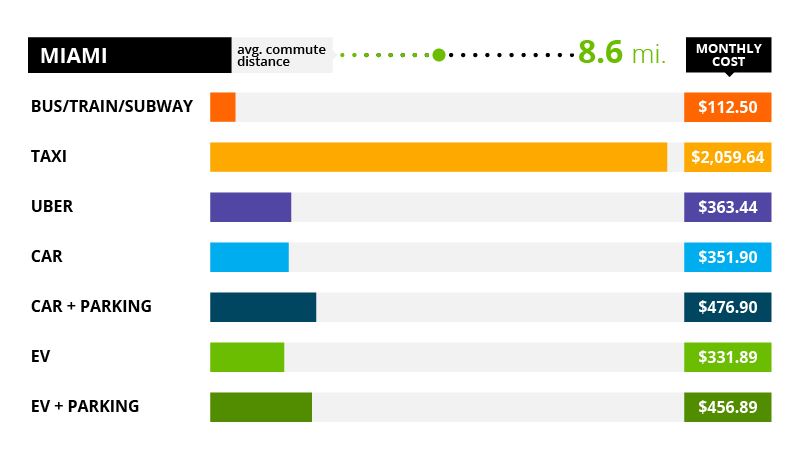 Miami tops the list in car commuting cost because of their $239.50 registration fee. They also top the cost for taxi commute by almost $700 more than the next city. Their cost per mile of $5.10 is what makes this so high. 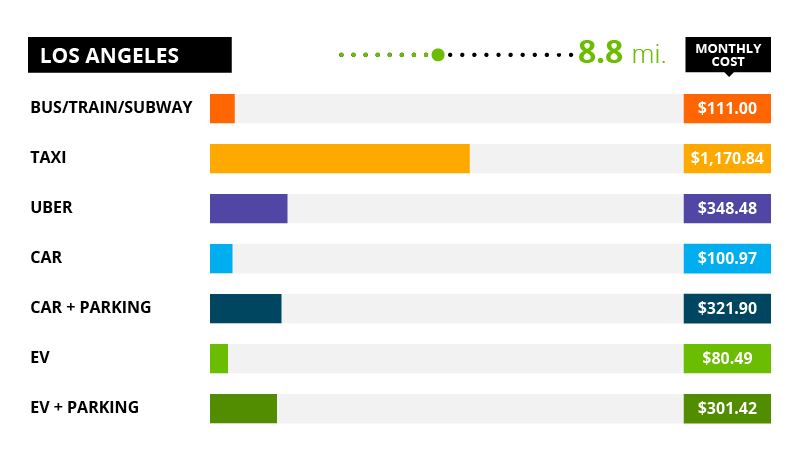 The cost to commute in a car in Los Angeles is fifth on the list at $100.97, slightly cheaper than public transportation. But, traffic in Los Angeles is some of the worst in the world, so it might not be worth it. 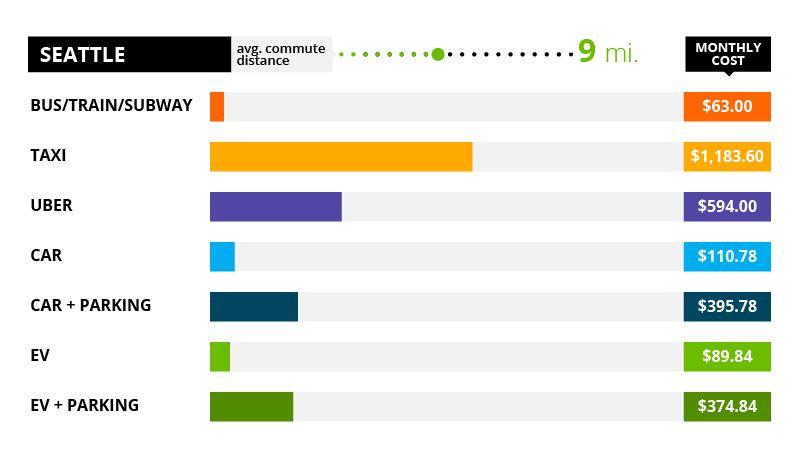 At $63, public transportation is second lowest on the list. However, Seattle has the second highest rates for Uber. This is in part because Uber’s mile rate is $1.35 in Seattle, which is the second highest behind New York (which has the highest Uber commute cost.) 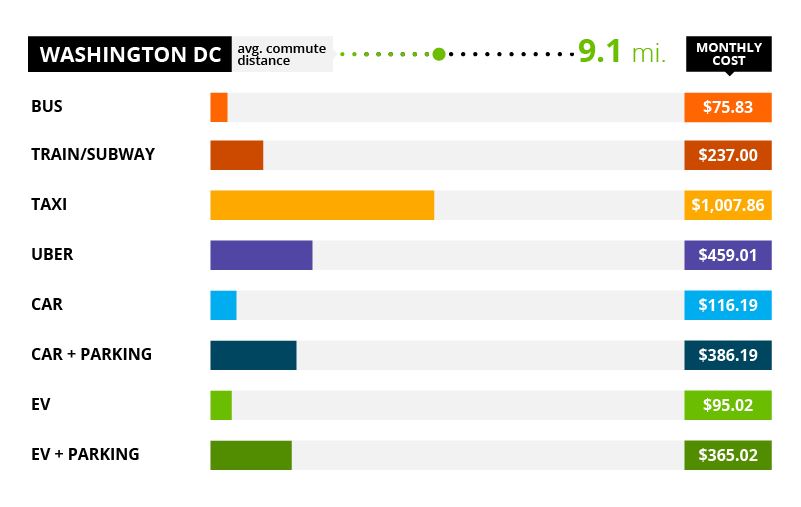 Washington D.C. is the city in our study where monthly bus rate was different than the train/subway according to the D.C. Metro site. But with a bus cost of $75.83, it actually sits reasonably low on the list, on par with Minneapolis or San Diego. 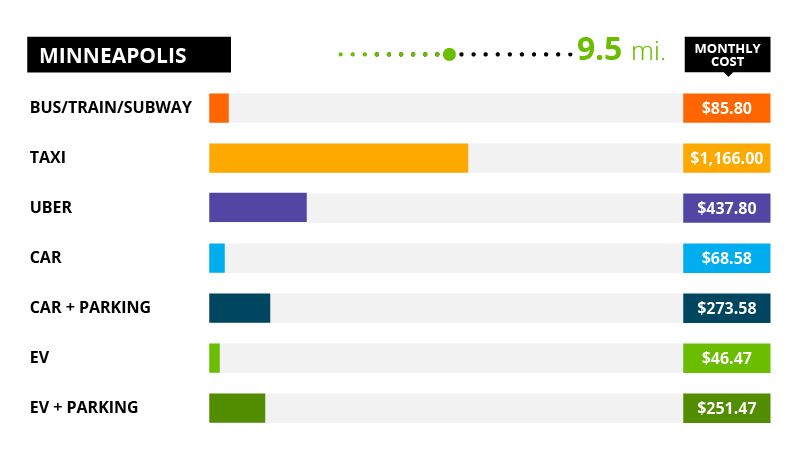 At $46.47 and 68.58, Minneapolis had the lowest electric vehicle and car commuting costs in our study. This is due a $16 registration fee and $13.75 title fee according to the Minnesota Department of Public Safety website. 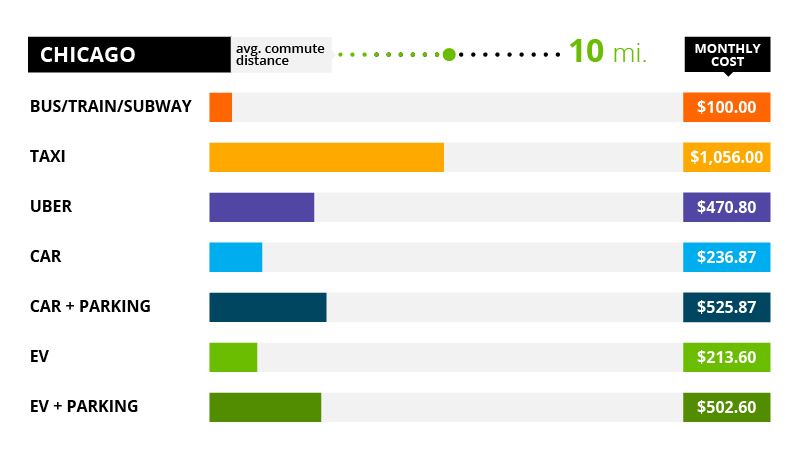 Chicago has one of the highest commute distances at 10 miles. However, despite this larger distance, they still sit in the middle of the ranks for cost to commute with Uber or taxi. 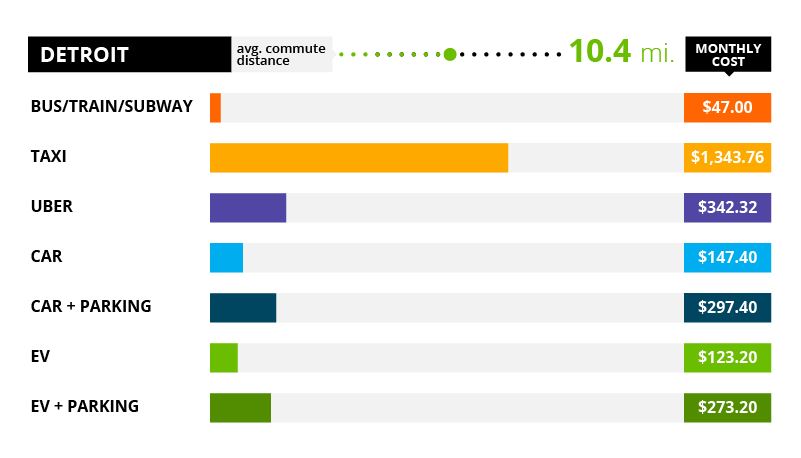 Detroit has the second highest taxi cost, due to their extremely high cost per mile of $6.10 according to Taxifinder. In fact, when you compare Uber rates to taxi rates, Uber is almost four times cheaper than taking a taxi in total. 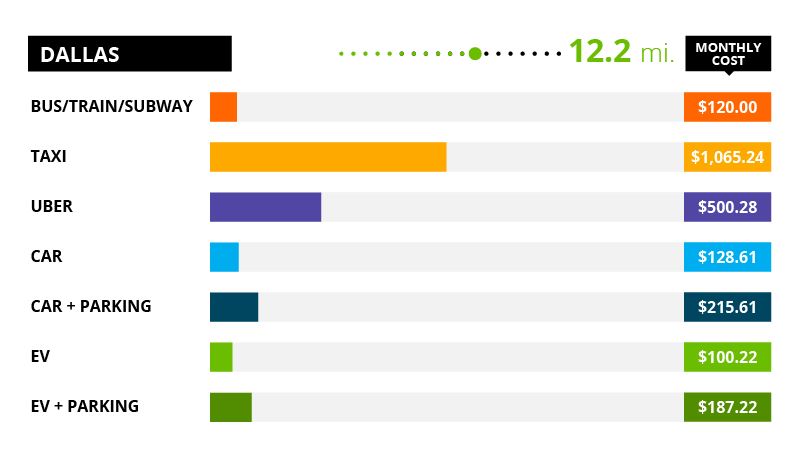 Despite the high rates commuter distance, car costs and electric car costs with parking rank the lowest cost in the whole study. This is due to an amazingly low $87 monthly parking rate according to Colliers International. 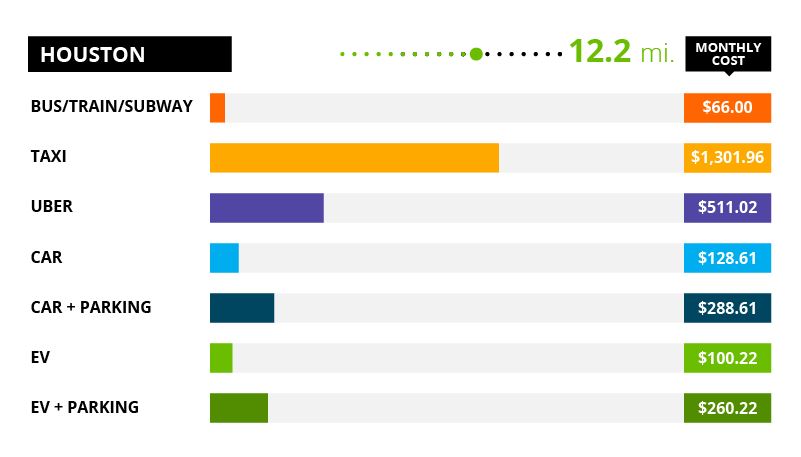 Hopefully, with this better idea of your commuting options and the costs associated with each, it will help ease the stress that you face getting to and from work each day. All commuting options have their pros and cons, just like every city has its unique traits. Keep in mind that weather and traffic can always greatly change the commute in any U.S. city. So, weigh your options carefully, and happy travels!

Cost to own a car