Where Commutes Cost the Most

If time is money, then getting to and from work is costing us.

LendingTree has ranked the cost of commuting in the country’s 100 largest cities, with respect to the time spent, not the amount spent on a bus pass or car loan. Commutes are especially costly in California where wages and traffic are high, meaning valuable time is wasted staring at other people’s bumpers. Texas generally fares better — Houston notwithstanding — but we know from earlier studies that Texans take the brunt of auto debt.

Cities with the highest commute cost per person

Across the bay from San Francisco, people who work in Fremont have median earnings of $82,106 and a one-way commute time of 34.9 minutes. In a five-day work week, residents spend about $245 a week in commuting costs, or $12,801 a year. 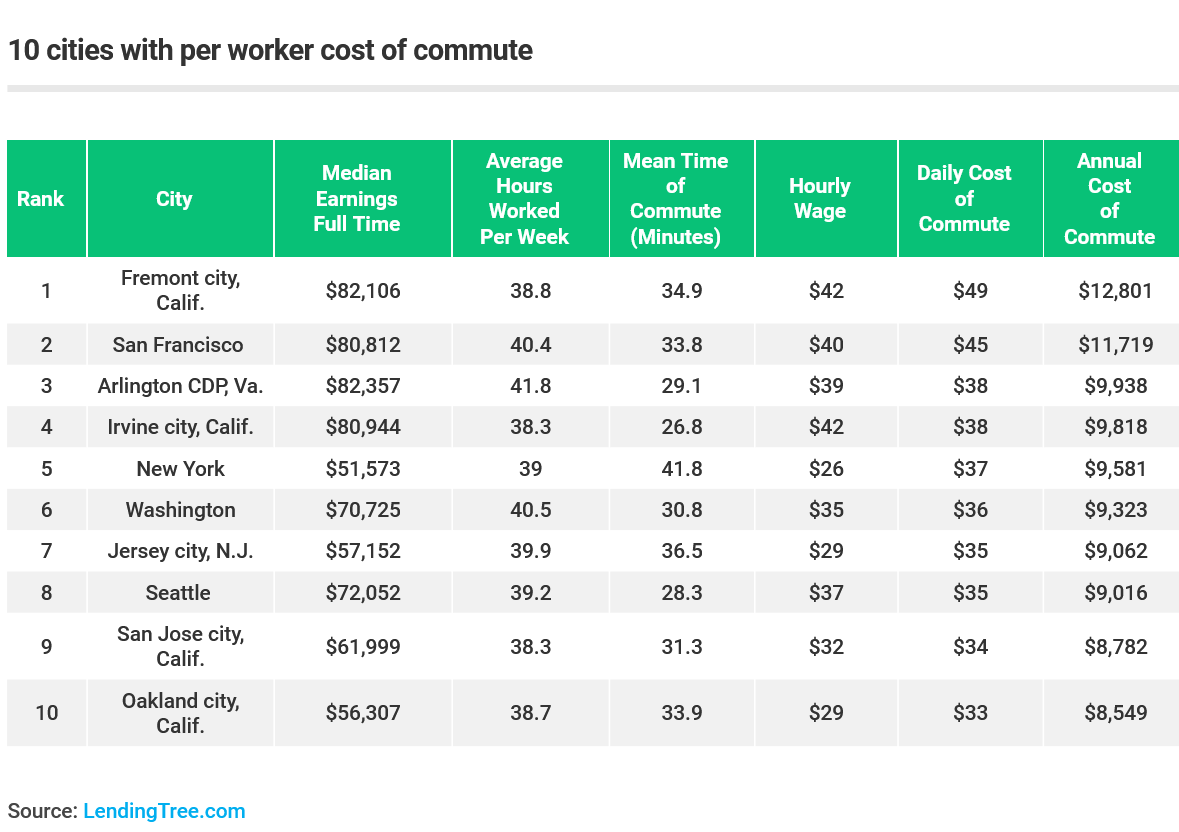 In the area known as NoVa (northern Virginia), Arlington sits on the outskirts of our nation’s capital. The median wage is $82,357, average hours worked per week stands at 41.8 and the mean commute time is 29.1 minutes. The cost of time spent traveling to and from work adds up to a value of $9,938 annually.

Just south of Los Angeles in nearby Orange County, those who commute to work in Irvine spend 26.8 minutes on average in traffic, one way. With median earnings of $80,944, this translates to $38 a day, $190 a week or $9,818 a year in time spent commuting.

Despite significantly lower median earnings, workers in the Big Apple still land in the top 10 for the largest cost of time spent in commute, largely because they spend so much time commuting. The mean time of commute is 41.8 minutes, one way, and the median earnings is $51,573. This makes the daily cost of commute $37, with an annual cost of $9,581.

With about half the working population of New York and an average one-way commute time of 31.8 minutes per person (10 minutes less than New York), the total, city-wide cost of time spent commuting in Los Angeles is less than a third of New York’s at $10.9 billion annually. Its per worker cost of commute annually is $6,108. 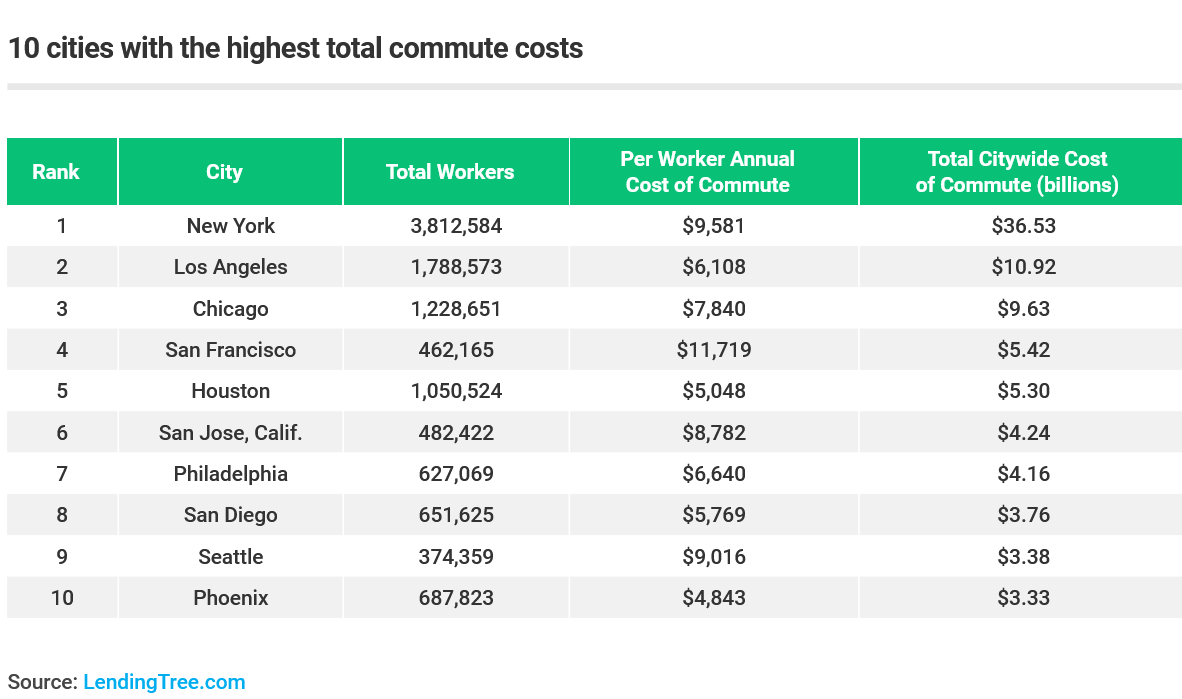 People who work in the Windy City spend about $9.6 billion worth of their time commuting, a per worker annual cost of $7,840 given that Chicago has a total of 1.2 million commuters. Chicago’s workers earn a median earnings of $50,418 and work an average of 38.9 hours per week.

San Francisco has about half a million fewer workers than No. 5 Houston, but the cost of commuting takes a slightly higher toll on the city due to its higher median wage. Its 462,165 workers spend an average of $11,719 in time spent commuting, per person, making a total city-wide cost of commuting of $5.4 billion.

Commuting costs H-Town $5.3 billion annually as its 1 million workers spend $5,048 worth of their time annually traveling to and from work. The average hourly wage in Houston is on the high side, at $20.95 and median earnings are at $41,903.

In order to rank the cities where commutes cost the most, we looked at data for the 100 largest U.S. cities by the number of workers. To rank them we looked at the following three metrics:

Using these three metrics and assuming the worker worked 50 weeks per year (full-time plus two weeks off) we were able to estimate annual hours worked. From there we divided median earnings by average hours worked to estimate hourly earnings. We then multiplied hour earnings by average commute time to estimate the cost or value of time spent commuting. We ranked the cities from highest to lowest based on this figure. To find the cities with the highest total commute cost, we multiplied the average commute cost by the number of commuters.

Where Commutes Cost the Most

Beyond the cost of money spent on gas or a bus pass, commutes cost the most in cities and states where wages and traffic are high.