In the first quarter of this year, household net worth, as measured by the Federal Reserve Financial Accounts, reached $100 trillion for the first time. Assets — primarily financial instruments and real estate — gained more than $1.07 trillion in the first quarter, handily outpacing the additional debt Americans accumulated.

Nonetheless, liabilities have been steadily increasing in recent years. But unlike a decade ago, mortgages aren’t the culprit. It is non-mortgage-related debt, such as student loans, credit card debt and auto loans, that have been growing. By the end of the second quarter 2018, we’ll have $1 trillion more in household debt than we did in 2008 — and none of it is attributable to housing. 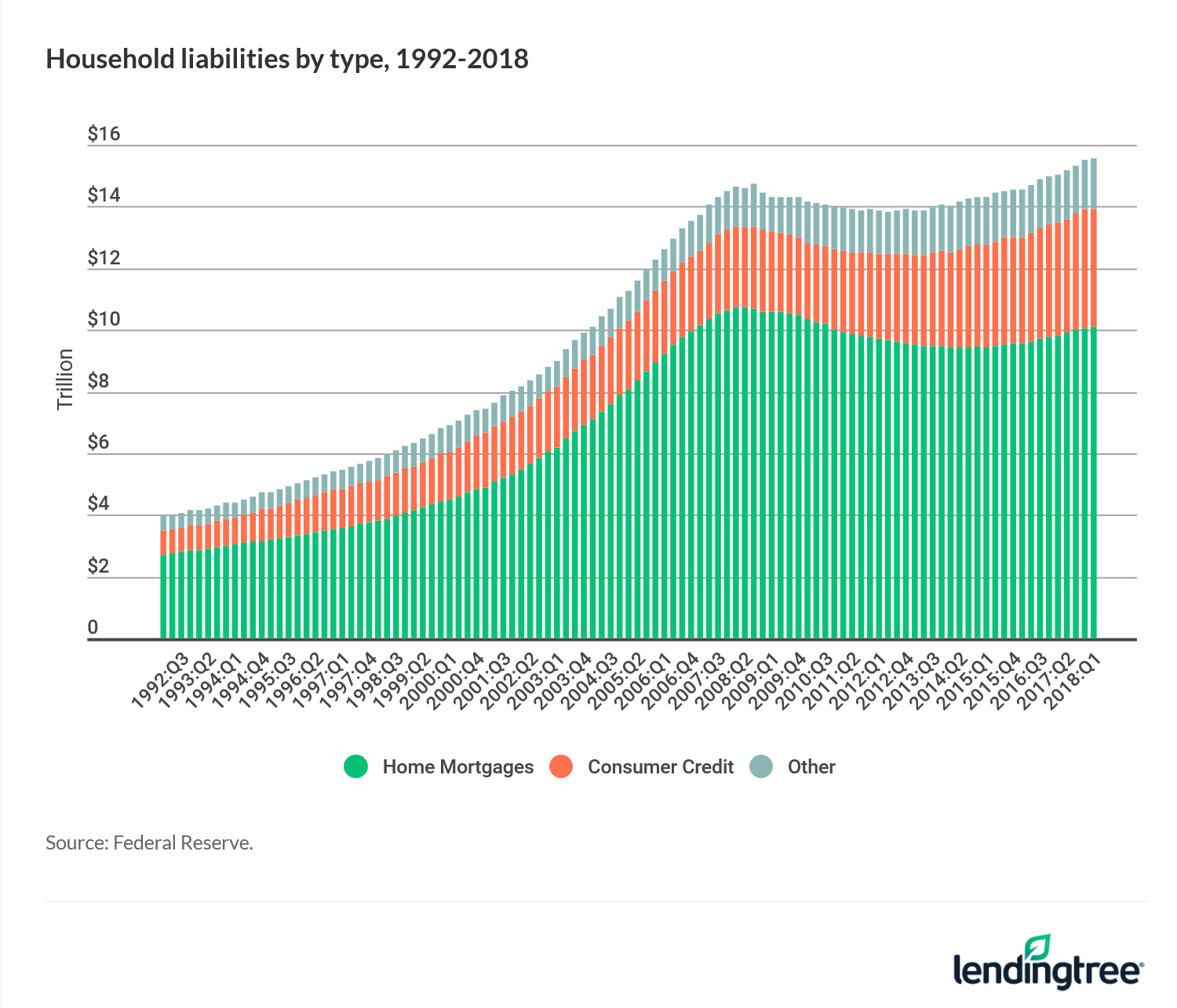 Since the third quarter of 2008, the peak of last decade’s housing bubble, mortgage-related household debt has actually fallen by 5.5%. Meanwhile, consumer credit — a collection of revolving credit and installment loans, has increased by 45%. 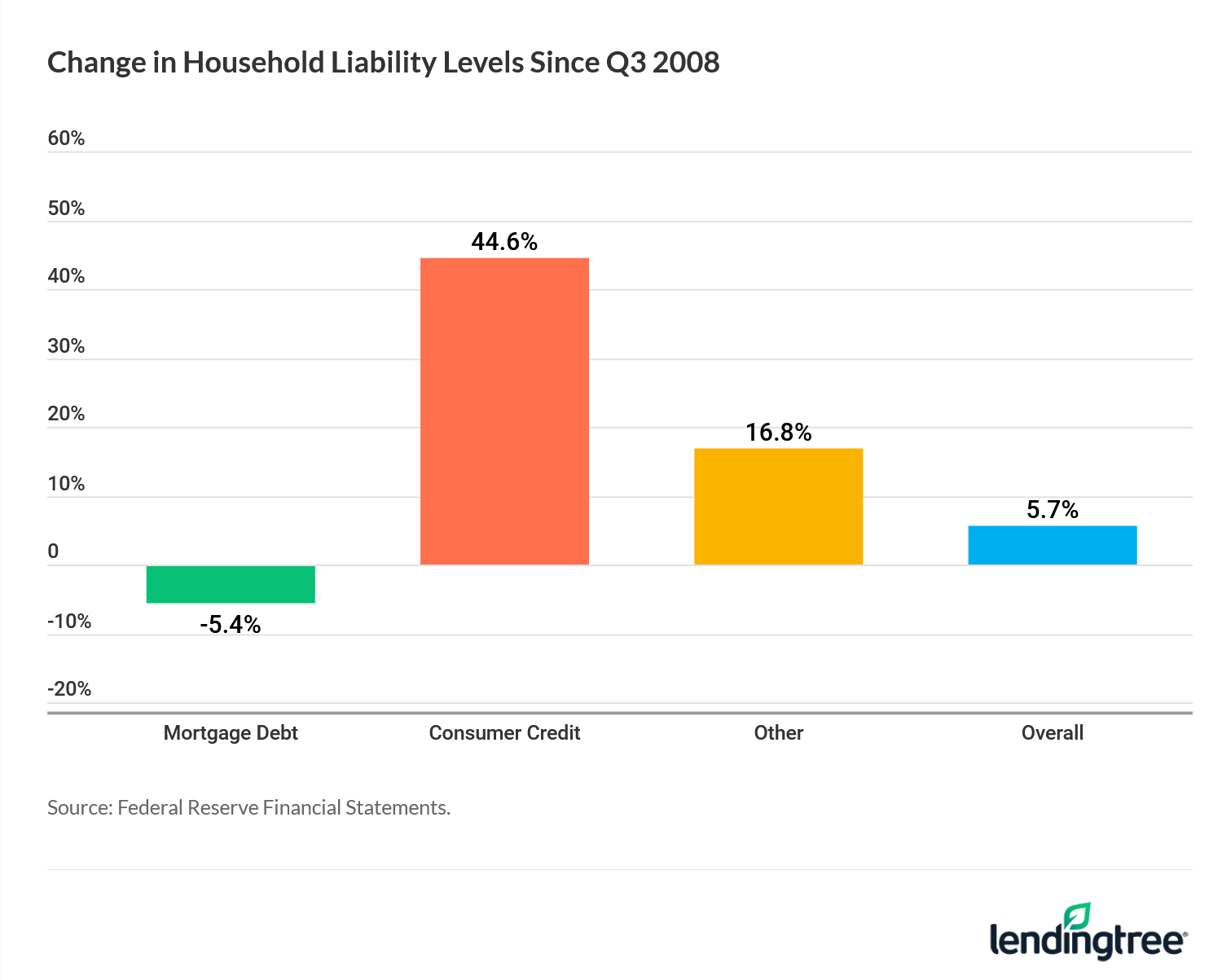 Consumer credit is a collection of a number of household liabilities — auto loans, credit cards and student loans are the three largest types. Of the three, student loan balances are growing the fastest — they’ve risen 130% since the housing crisis began. Compare that with auto loans, which have risen a much more modest 39% in the past decade. Credit card balances are actually slightly lower than they were in 2008, and that’s before factoring in 10 years of inflation. 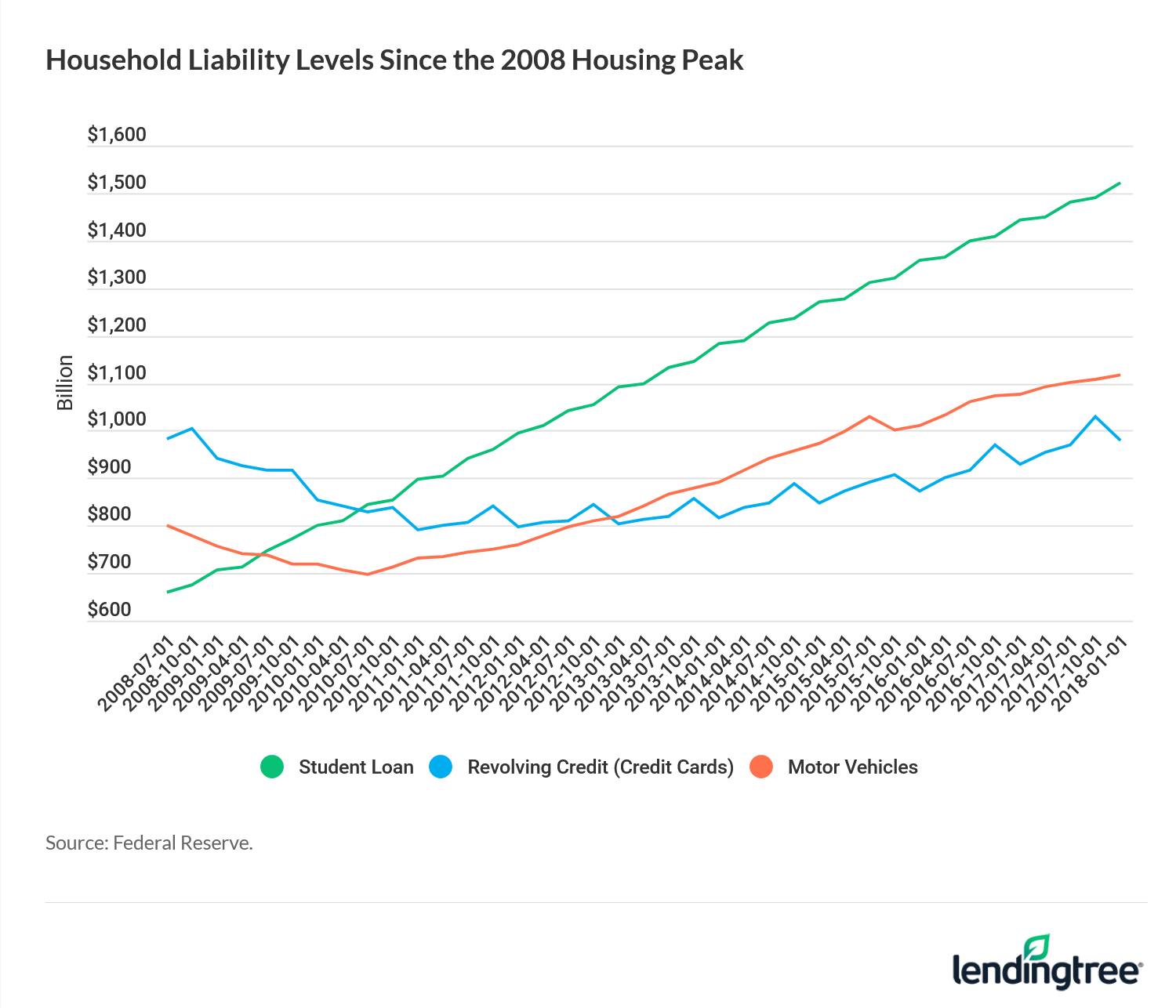 But no matter the mix, the trend is definitely more debt. We project that total consumer debt (excluding mortgage debt) will exceed $4 trillion by the end of 2018. 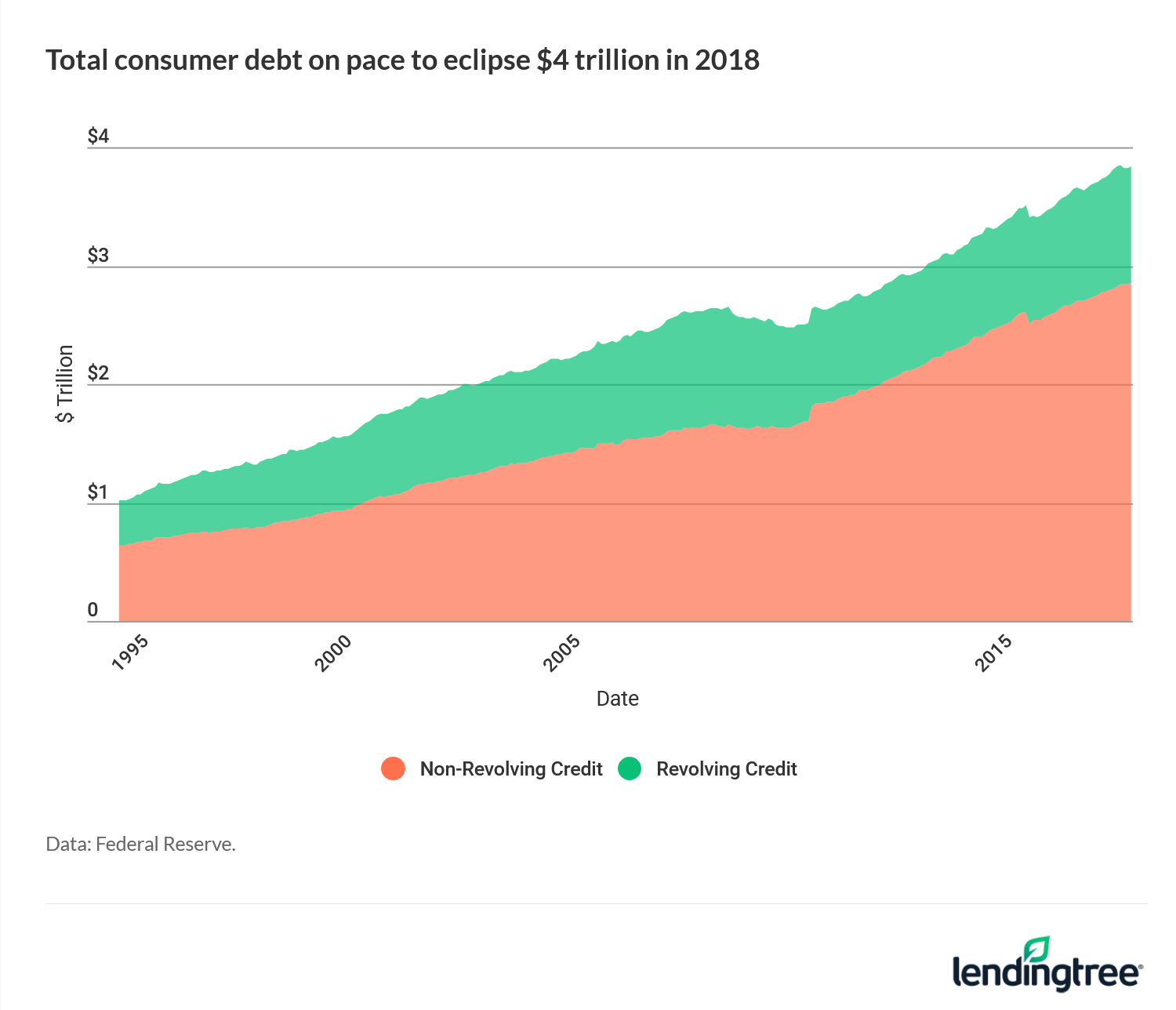 Income gains are mitigating the increase for most; millennials are an exception

Although total household debt has returned to 2008 levels, the difference in 2008 and today’s income and types of debt are significant.

Most important, mortgage balances as a percentage of disposable personal income has fallen from a high of 98% in 2008 to 68% as of the latest quarter. In other words, homeowners today, on average, have significant equity in their homes. Ten years ago, equity was virtually nonexistent. 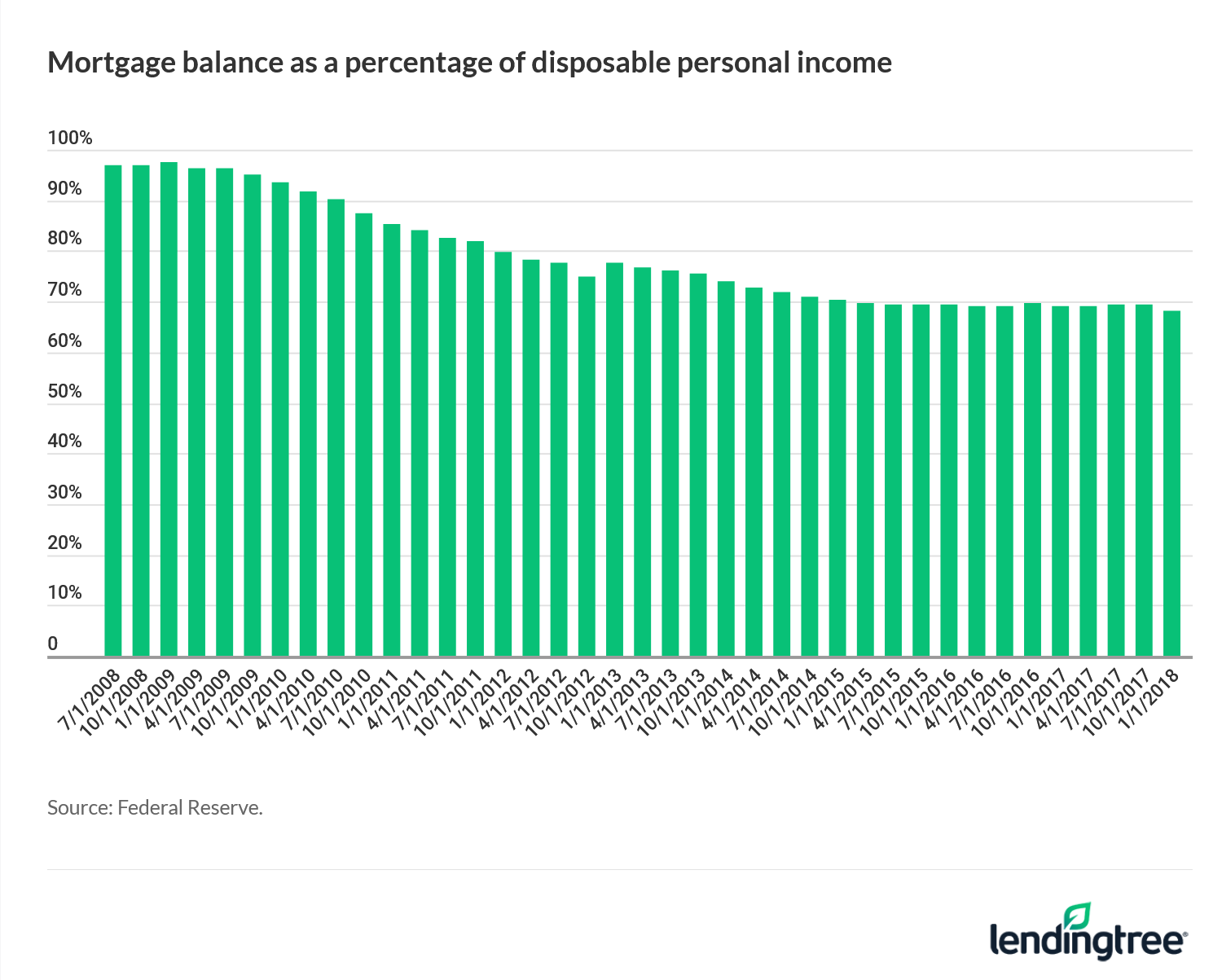 Similarly, credit card debt, as measured as a percentage of income, has fallen by about 30% versus the levels they were at a decade earlier. Credit card balances represent about 6.6% of income as of the first quarter of 2018; a decade ago, it was nearly 9%. 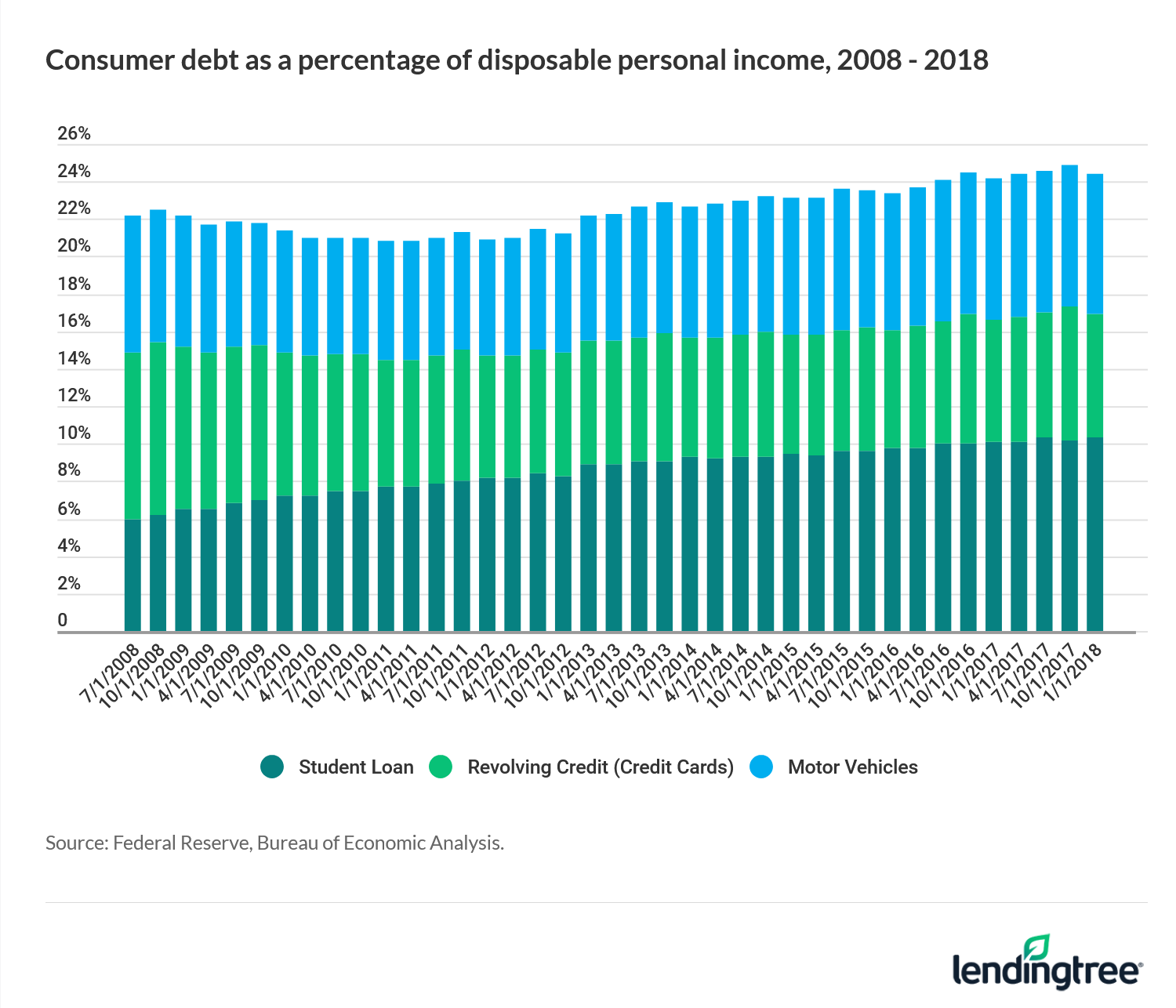 At the other end of the spectrum, student loan borrowers are shouldering nearly 70% more than they were a decade ago, as student loans now represent 10.3% of disposable income, versus 6% a decade ago.

As millennials bear most of this student loan debt while remaining underrepresented in homeownership versus other age cohorts, the economic distress of millennials becomes much more understandable, at least on a relative basis, and relating specifically to debt burdens.