The average credit card interest rate in America today is 23.39% — the highest since LendingTree began tracking rates monthly in 2019.

Every month, LendingTree reviews about 200 of the most popular credit cards in the U.S. — from more than 50 issuers — to comprehensively look at the state of credit card interest rates. We publish our findings here.

Average interest rates on new credit card offers in the U.S. in January 2023

This month’s increase comes on the heels of the Federal Reserve’s seventh and final interest rate hike of 2022, a jump of 0.50 percentage points in December. While most experts don’t expect as many rate increases in 2023, there are likely at least a few more still to come, including one at the Fed’s next meeting on Jan. 31 and Feb. 1.

Important: Most credit card issuers don’t offer one rate to everyone. Issuers offer a range of possible rates based on whether you have good or bad credit. The better your credit, the lower the rate you can typically expect. But that’s not guaranteed as issuers consider various factors when approving you for a new card account.

The good news is that the average FICO Score of Americans in 2021 was 714, according to Experian — a record-high. That means most Americans may be more likely to qualify for that lower interest rate. For those who don’t, however, things get expensive in a hurry.

That’s a savings of $520 in interest and two months in payoff time. In normal times, given that most Americans’ financial margin for error is tiny, that’s a big deal. However, these aren’t normal times, so those savings are even more important.

The type of card you shop for also makes a difference in what APR to expect. For example, we found that cash back cards and 0% balance transfer cards tend to have lower APRs than travel rewards cards. (That’s true even when you exclude the 0% offer.) Meanwhile, secured credit cards — which require a deposit to open and are typically held by folks new to credit or rebuilding it — have the highest APRs overall.

Each quarter, the Federal Reserve releases data on cards currently in Americans’ wallets. It looks at the average interest rate for accounts that have been assessed interest — meaning those accounts that weren’t paid in full at the end of the month — and across all credit card accounts.

It’s important to distinguish between them because more than half of active credit cardholders carry a balance. The average APR for all accounts in the fourth quarter of 2022 was 19.07%. That’s an enormous increase from the previous quarter, when the average stood at just 16.27%. (In the quarter before that, it was just 15.13%.) Meanwhile, the average for accounts accruing interest is far higher at 20.40%. Both of those numbers are the highest they’ve been since the Fed began tracking in 1994.

The latter number is the one that matters, though. After all, a credit card interest rate is a moot point if you pay your bill every month since interest never has the chance to accrue. Unfortunately, that’s not the reality for most Americans. The truth is that 2022 was a brutal year for credit cardholders, and the bad news on interest rates isn’t likely to stop coming anytime soon.

How have credit card interest rates changed over the years? 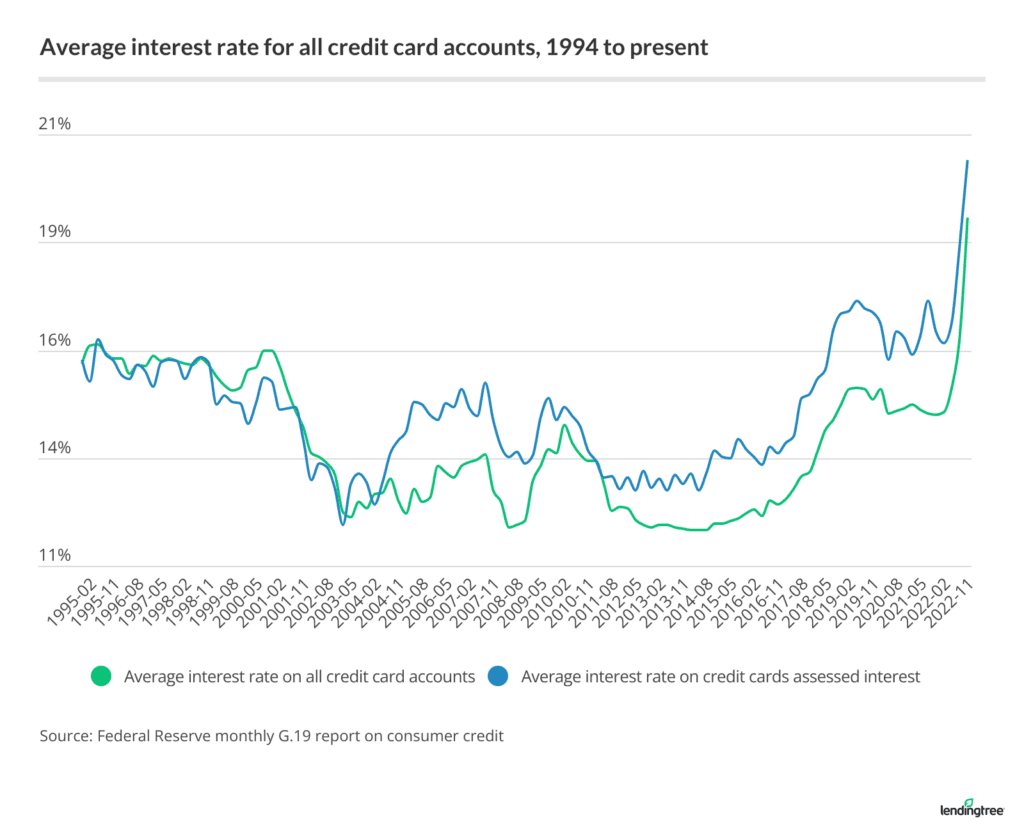 In recent years, we’ve seen significant movement in interest rates, largely driven by the Federal Reserve. Rates rose significantly beginning in 2015 and continued to do so until 2019. The following year, the Fed dramatically lowered interest rates in response to the economic turmoil seen at the beginning of the pandemic. This year, however, the Fed has reversed course, raising rates multiple times, with another likely coming this month (and more expected in 2023).

Before 2015, credit card rates were largely stable for several years, following the introduction of the Credit Card Accountability, Responsibility and Disclosure Act of 2009, better known as the Credit CARD Act. The pro-consumer law, signed by former President Barack Obama, brought enormous change to the credit card space. It set limits on when issuers could raise cardholders’ rates, changed how payments must be applied to balances, restricted certain fees and much more. Those changes forced issuers to scramble to figure out how to recoup the revenues lost under the CARD Act. As a result, credit card rates became volatile for several years — one card even famously featured a 79.90% APR for a short time — as banks determined what the market could bear.

Ultimately, all the changes led to overall higher credit card interest rates but relative stability, even as the nation emerged from the Great Recession. That stability lasted until the Fed began raising rates in 2015. Those hikes helped push rates to the high levels we see today.

What can I do if my interest rate is too high?

These are certainly unusual times. Credit card interest rates are climbing, thanks to recent rate increases from the Federal Reserve, and are likely to continue to do so for several more months. That means it’s perhaps more important than ever that you start knocking down your credit card debt in a big way. Obviously, if the pandemic has upended your financial life, that may not be possible. However, if you still consider yourself healthy financially, one of the best things you can do is pay down your debt to free up more cash for a rainy day fund.

For new credit card offer APRs, LendingTree examined the online terms and conditions for about 200 credit cards from more than 50 issuers, including banks and credit unions. To gather the data, we noted the standard purchase APRs listed for each card on each issuer’s or retailer’s website. (Introductory or promotional rates aren’t included in our averages.)

For current credit card account APRs, we used data from the latest G.19 consumer credit report from the Federal Reserve.

As Americans wrestle with economic uncertainty, there are few better tools to fight debt than balance transfer credit cards with 0% intro APR offers.