Despite rampant inflation and rising interest rates, the percentage of Americans going into debt over holiday spending dipped slightly in 2022, according to a new report from LendingTree.

However, that’s where the good news ends. Among those taking on holiday debt, the average amount is the highest since LendingTree began tracking in 2015, most say they didn’t intend to take on any debt, and more than 1 in 3 say their debt will take at least five months to pay off.

In 2022, 35% of Americans took on holiday debt, down a tick from last year’s 36%, but the average amount among those who took some on this year is $1,549. That’s up 24% from last year and is the highest in the eight-year history of the LendingTree holiday debt survey. It spells trouble for many Americans struggling with rising costs heading into the holiday shopping period.

Worse, the percentage of holiday debtors who say it’ll take five months or more to pay off that debt rose significantly, too, going from 28% a year ago to 37% today. There’s never a good time to carry debt, but this is a particularly bad time with interest rates at record highs.

A year ago, this survey showed the first decrease in average holiday debt since tracking began in 2015. However, following a year of rising prices, seven interest rate hikes from the Federal Reserve to drive credit card interest rates to record levels and overall economic uncertainty, a second-straight decrease wasn’t in the cards. Instead, we got the biggest dollar increase in the eight-year history of this report.

How big a problem holiday debt is depends on how much you take on.

A little debt you’ll pay off in a month or two isn’t necessarily a big deal. Chances are that you won’t pay a fortune in interest in that period, and the debt won’t wreak too much havoc with your finances. However, extend that debt out five months or more — especially with interest rates as high as they are today — and things change. That’s what many Americans are facing heading into 2023. 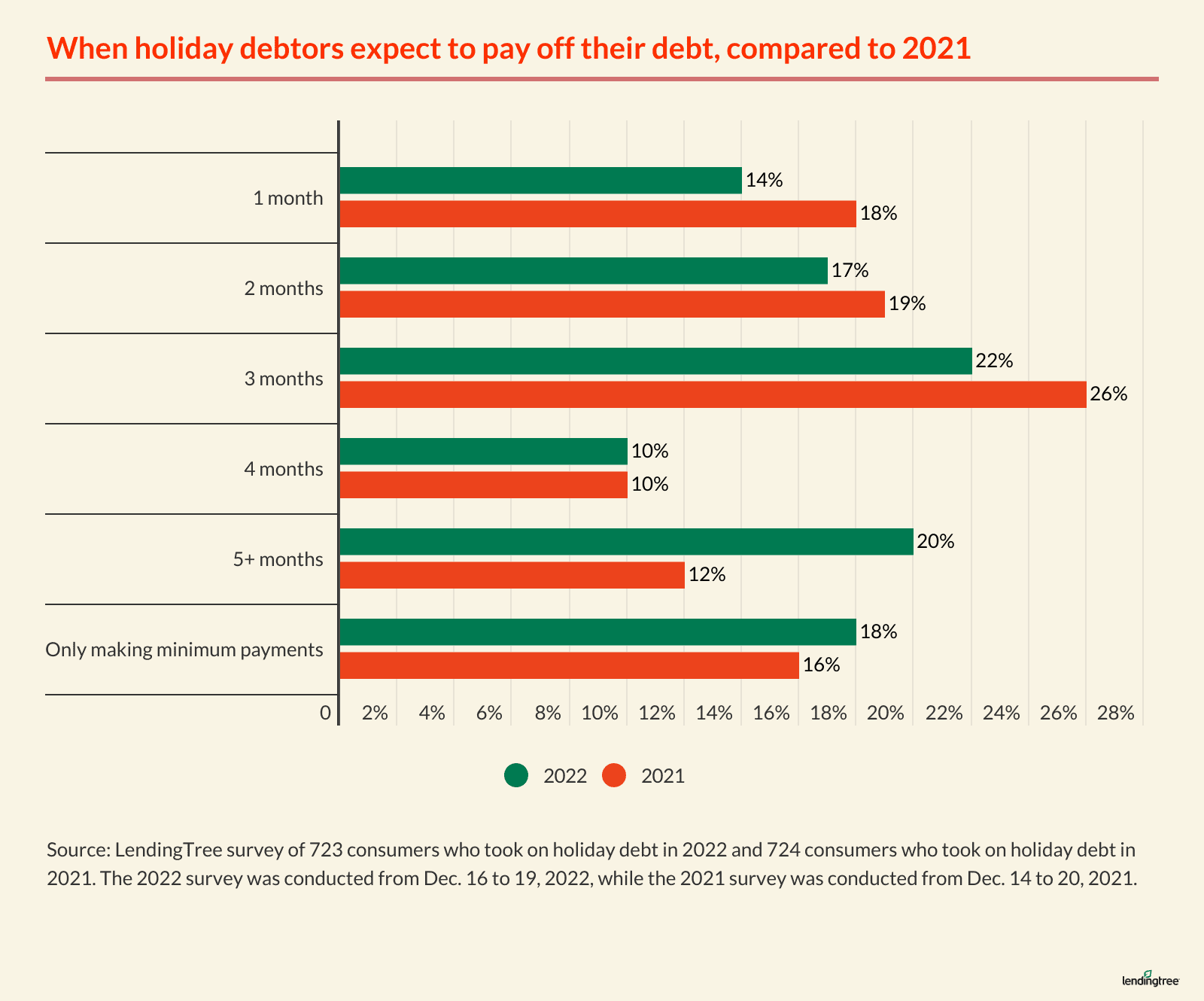 If someone takes five months to pay off a $1,549 balance on a card with an APR of 18.43% — the average rate today on a card that carries a balance, according to Federal Reserve data — they’ll pay an extra $48 in interest. Double that payoff time to 10 months and keep everything else equal, they’ll pay $108 in interest. That’s real money. Make that payoff time longer or that interest rate higher and those numbers keep climbing. That’s why it’s so important to pay off that balance as soon as possible.

More people are taking on debt without planning to do so

For millions of Americans, it’s not possible to pay off their credit cards in full regularly. Life is expensive in 2022, and it isn’t going to get any less so in 2023. That means that people’s financial wiggle room is almost zero, so any unexpected expense can put them in debt whether they like it or not.

Our survey hints that this happened for many Americans this holiday season. Higher prices everywhere led people to take on debt they didn’t plan to accumulate. In all, 63% of those who took on holiday debt say they didn’t plan to do so. That’s up from 54% a year ago. 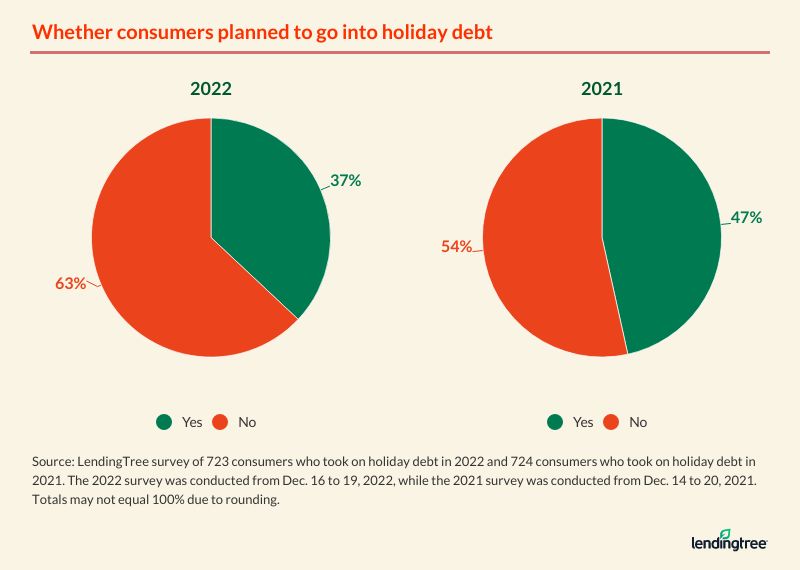 Bigger-ticket spending may contribute to this higher debt. About 1 in 5 holiday debtors (19%) say the most expensive gift they bought cost $500 or more. That’s nearly double the 10% of those who didn’t take on holiday debt who say they spent that much.

However, despite all this extra debt, fewer holiday debtors plan to take advantage of debt consolidation and balance transfers to lower their interest rates. Just 33% of holiday debtors say they’ll try to consolidate their debt or shop around for a balance transfer credit card to lower their interest rates. That’s down from 45% a year ago, and with interest rates currently at or near record levels, that drop is bad news. It means that far too few people are planning to take advantage of two of the best weapons in anyone’s arsenal for the fight against credit card debt. 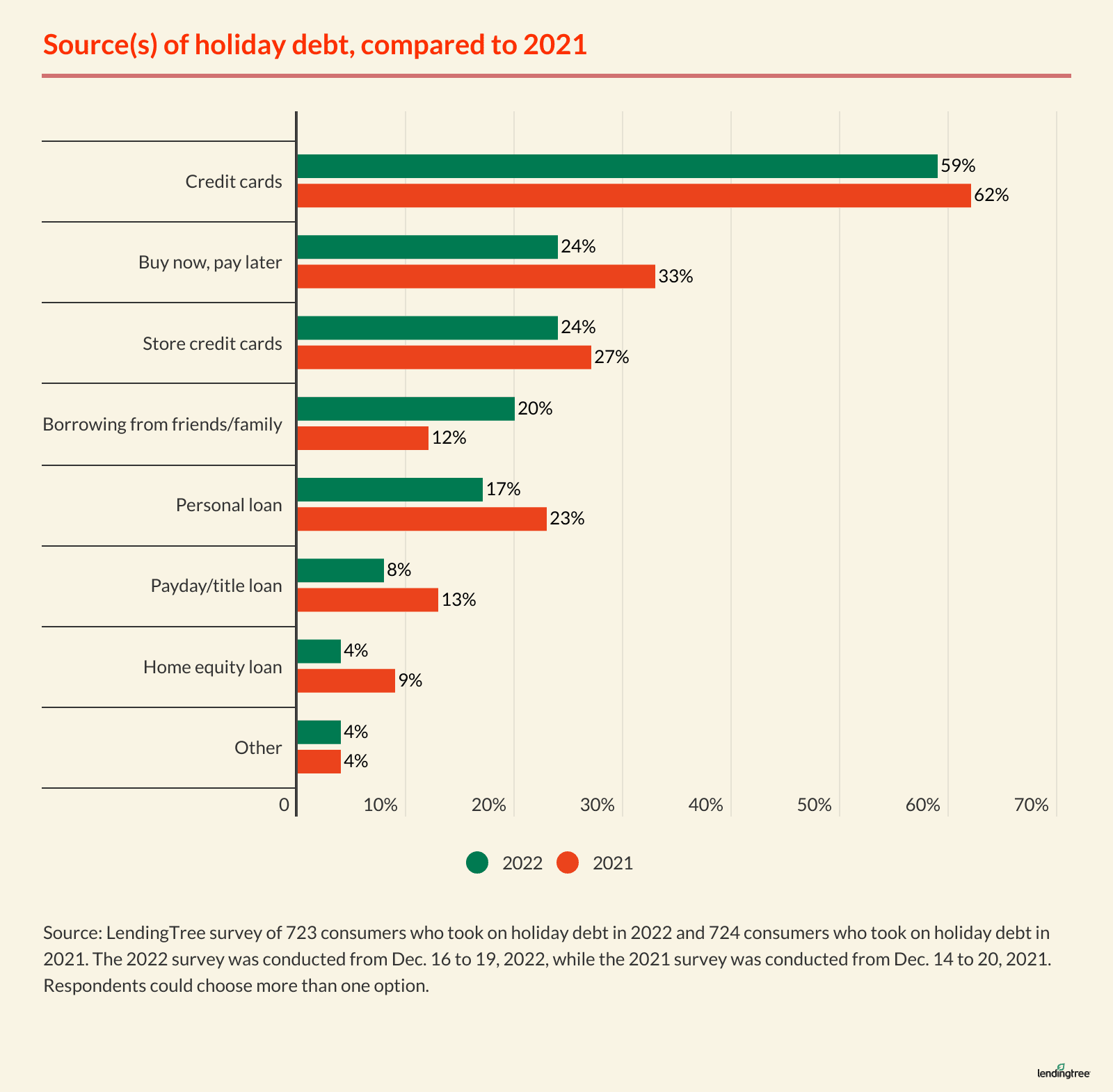 That’s a significant decrease for BNPL loans. In 2021, 33% of those with holiday debt said BNPL had played a part. It’s unclear what spurred the decrease. The loans have never been more widely available or better known.

Oddly, the only source of holiday debt more common in 2022 than in 2021 was borrowing from friends and family. One in 5 holiday debtors (24%) say that was a source of their debt, compared with 12% a year ago. The reasons for this are unclear. However, it could be a result of interest rates rising and banks making it tougher for folks with imperfect credit to get a loan.

Holiday debt can be scary, especially in a time of inflation and economic uncertainty. However, your problems will only get worse if you don’t do anything to combat it. The good news is that you have options. Here are some tips for helping you take on credit card debt:

LendingTree commissioned Qualtrics to conduct an online survey of 2,050 U.S. consumers ages 18 to 76 from Dec. 16 to 19, 2022. The survey was administered using a nonprobability-based sample, and quotas were used to ensure the sample base represented the overall population. All responses were reviewed by researchers for quality control.

The post-holiday season can be the perfect time to focus on tackling gift-related debt.

Here’s what you should do to get the most out of your credit card for holiday purchases.