Living in the family basement or not pulling in a paycheck have long been red flags on the dating scene. And though the COVID-19 pandemic may have pushed otherwise eligible bachelors and bachelorettes into these situations, they run the risk of turning off potential romantic partners.

Nearly 8 in 10 Americans (77%) have financial turnoffs — from partners being unemployed to having lots of debt — and 25% of Americans’ turnoffs have stopped a relationship in its tracks, according to the latest LendingTree survey of 2,100 respondents.

The survey data also indicates that when dating turns into an exclusive relationship, money-related concerns become money-related arguments for 61% of couples, many of whom aren’t completely open with their significant others about the true state of their finances.

Dating fraught with financial complications, not ‘affordable’ for all

Wondering who might pick up the tab for drinks, dinner or a movie isn’t the only way money complicates dating. There are also financial turnoffs that could end a date or a new relationship, or stop one before it starts. In fact, 25% of respondents say something related to money has been a dating deal breaker in the past, especially among Gen Zers ages 18 to 25 (32%) and millennials ages 26 to 41 (31%).

And though our survey indicates financial turnoffs are widely shared, two groups are more likely than their peers to report being turned off by money-related characteristics of potential romantic partners:

Dating isn’t just fraught. It’s also not free. Nearly half of survey respondents (45%) say they can’t afford to date, whether it’s to pay for their date, themselves or, more broadly, put their best foot forward without worrying about exhibiting a financial turnoff of their own.

Relying on parents, unemployment among most common financial turnoffs

Someone who has struck out on their own and gained financial independence from their family is traditionally seen as more of a “catch.” That perception holds for some Americans today, with almost 8 in 10 saying they have at least one type of turnoff.

A person relying on their parents for money is the top financial turnoff (44%), followed by:

Across types of relationship statuses, the biggest turnoff varied between relying on parents for money or being unemployed. Here’s how that broke down:

Those who are single and have never been married were the outlier, being most worried about someone who brags about how much money they have (41%).

Meanwhile, more than 1 in 2 women say they’re turned off by dates who rely on parents for money or who are unemployed. For their part, about 1 in 3 men share these turnoffs.

Given these ingrained perceptions, some of the biggest financial turnoffs reported in our survey aren’t altogether surprising. 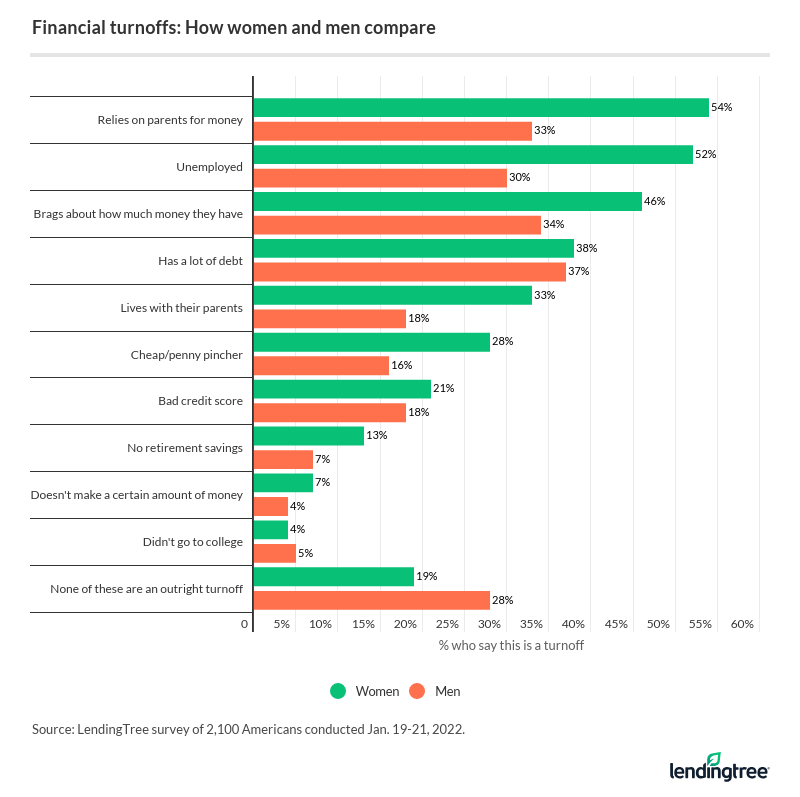 LendingTree chief credit analyst Matt Schulz says the COVID-19 pandemic and its effects on the economy — first, significant shutdown measures, then rising inflation — have furthered our preconceived notions around money and dating.

“It’s always going to be sexy to be financially stable and independent, but that’s even more true in volatile economic times like we’re in right now,” Schulz says. “Life in a pandemic is stressful and difficult enough. It makes all the sense in the world that people would want a partner they can depend on financially. It’s one less thing they need to worry about.”

Schulz warns, however, that being lauded for financial certitude “can keep people from coming clean about their problems when they do arise.”

“Folks might prefer to suffer in silence rather than risk being seen as a failure in the eyes of their partner,” he adds. “That’s a big reason why it’s important to start open and honest communication about money early on in relationships and to be kind and compassionate when you do.”

Majority of Americans argue about money with significant others

If you’ve argued with a significant other over money, join the club. More than 6 in 10 of those with a romantic partner say they’ve argued about financial topics.

For couples, debate most often centers around spending decisions (40%) or disagreements about savings habits (25%). Questions of “who pays for what” (17%) and how to tackle debt (17%) also prove contentious. 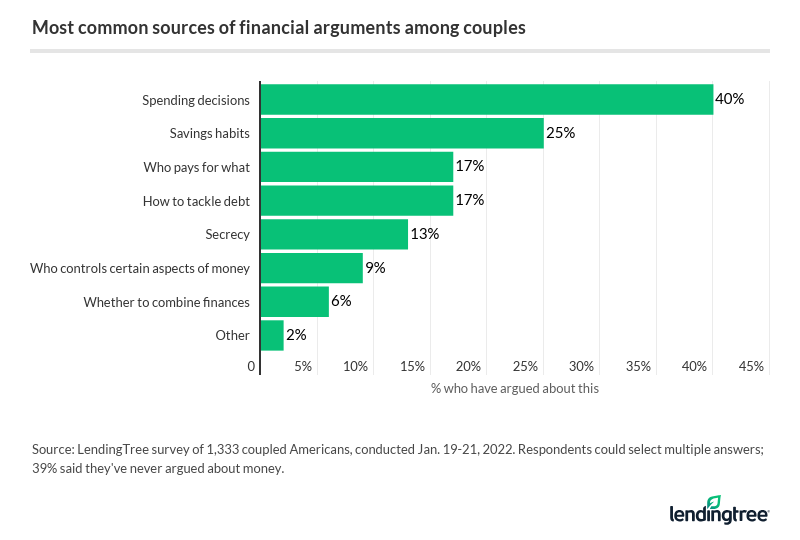 Aside from the content of money-related arguments, it’s worth looking at the cause. According to our survey results, financial fights can stem from three choices in mindset:

Almost 4 in 10 couples admit to having different approaches to money. So, unless you happen to be matched perfectly with your significant other, talking about money respectfully (instead of arguing) will likely take a concerted effort, Schulz says.

“It’s important in these conversations to actually listen and try to understand your partner,” he says. “You’re not always going to agree about everything, but if you understand the other person’s point of view and their priorities, you can probably come up with compromises and solutions that work for both of you.

“Also, just don’t be a jerk. Your tone and your attitude in these discussions are really important. If you come in looking for a fight, you’re probably going to get one. Whereas, if you come in ready to listen and work together, good stuff can happen.”

Another potential cause for money-related debate: being left in the dark. In fact, nearly 1 in 4 of respondents who have romantic partners (24%) are keeping a financial secret from their significant other. Hidden debt is the most common financial secret.

“Not everyone needs to be an open book about their finances with their partner,” Schulz says. “However, if you’re starting to talk about a future with someone, those discussions probably ought to include real talk about debt. In many cases, it may actually help bring you closer together. Plus, having someone in your corner and helping you with your battle with debt can be a big deal, too.”

Of course, it’s what you or your partner don’t know about the other’s finances that could, like a ticking time bomb, eventually erupt into a heated debate.

“It’s disturbing overall just how little people know about their significant other’s finances,” Schulz says. “These are awkward conversations to have, and they may end up leading to some conflict and fights. Ultimately, however, for a relationship to be successful, you have to be open and honest, and that’s certainly true when it comes to money.”

LendingTree commissioned Qualtrics to conduct an online survey of 2,100 consumers from Jan. 19-21, 2022. The survey was administered using a nonprobability-based sample, and quotas were used to ensure the sample base represented the overall population. All responses were reviewed by researchers for quality control.