LendingTree Survey Reveals 41% of Americans Have Moved for Love, With Women More Likely to Regret It

Love can compel you to step outside of your comfort zone, even to the point of uprooting your life and getting a mortgage with your “bae.”

A new LendingTree survey finds that 41% of Americans have moved for love, and men are more willing to relocate than women. Some, including 4% of millennials and 8% of Generation Z, even took a leap amid the coronavirus pandemic to quarantine with their partner. That’s some serious amore.

While gathering survey responses, we defined “moving” as relocating at least one hour away from respondents’ current home, and “love” as a romantic relationship.

4 in 10 Americans have moved for love

When survey respondents were asked if they’ve ever moved for love, 41% said yes. The reasons given were: 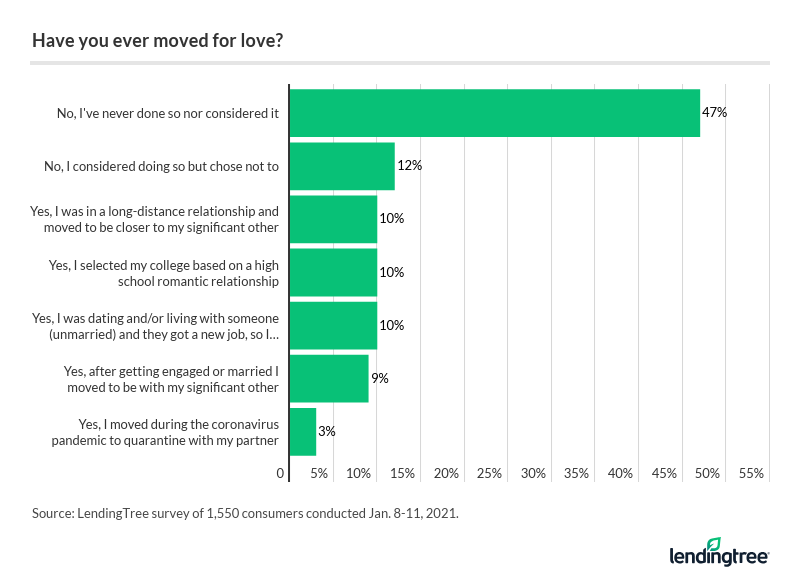 More than a third (39%) of those who relocated for romance bought a home with their partner. Another 49% moved into a rental.

Ultimately, pragmatism might be driving more couples to shack up together than grand romantic gestures.

“Splitting household expenses can increase your prospects of becoming a homeowner,” said Tendayi Kapfidze, LendingTree’s chief economist. “While renting, it enables you to save more and can increase your budget when buying.”

Men are more likely to move for love than women

Our survey data show that men seem to be more willing to move than women — 45% versus 36%, respectively.

Another noteworthy demographic trend: Baby boomers were most likely to decide against moving for love, at 81%. They either considered it and landed on a “no,” or never even let the thought of moving for a partner cross their mind. Savage. 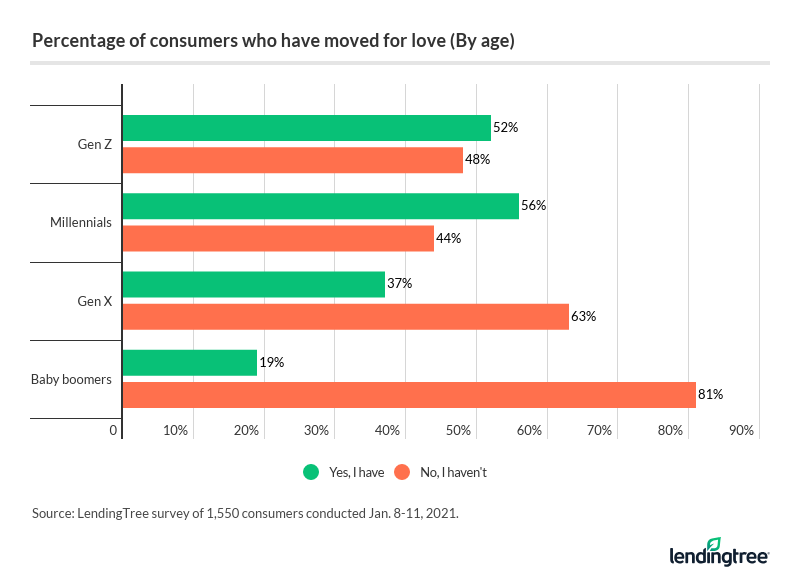 More than 1 in 4 (27%) of those who moved for love were dating their partner for less than a year before relocating. Additionally, more than 4 in 10 (44%) had been dating for one to two years prior to their move.

Nearly half (44%) of the survey respondents who moved for love relocated to another state. The Sunshine State was the top destination, at 11%. With Florida’s tropical weather, breathtaking beaches and romantic sunsets, who can blame the lovebirds?

The states rounding out the top five places for love relocation are: 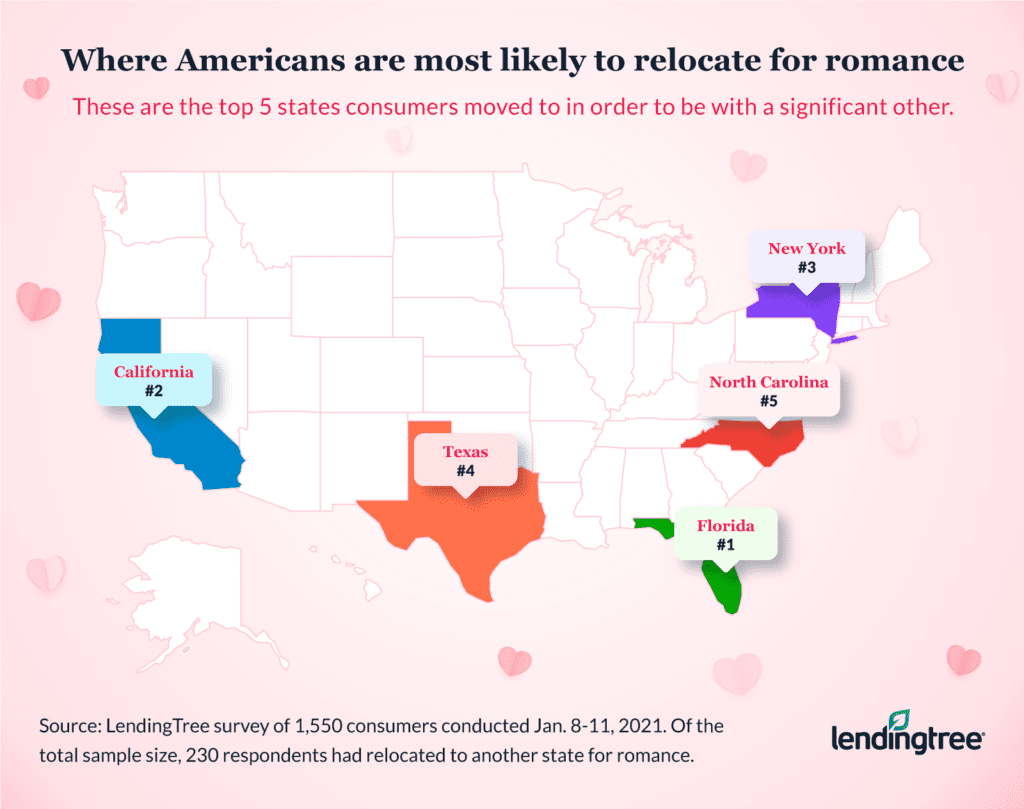 More than 1 in 5 (21%) of those who moved for love moved between 100 and 249 miles away from their previous residence. Another 11% moved more than 1,000 miles away. For reference, that’s the same distance it takes to go from New York City to Tampa, Fla. That’s quite the commitment.

Women are more likely to regret moving for love

About 1 in 7 (15%) of Americans who chose to move for love ended up regretting their decision. When broken down by gender, women are more than twice as likely than men to regret moving for love — 22% versus 9%, respectively.

The reasons for regret include:

For this survey, LendingTree commissioned Qualtrics, an experience management firm, to field an online survey of 1,550 Americans. The survey was conducted using a non-probability-based sample and the sample base was proportioned to represent the overall population. Responses were collected Jan. 8-11, 2021 and were reviewed by researchers for quality control.

The survey also included responses from members of the silent generation (ages 76 and older). They were excluded from the generational breakdowns, however, due to the small sample size.