As consumers grow older, they make more money and pay off debts, in turn giving them more wealth than younger folks — or so the story goes. But that story has changed a bit in modern times as home and education costs have climbed while real wages stagnated so much that those born later have had much greater difficulty following a positive financial trajectory.

After years of commentary about being broke, not being able to afford houses and overspending on coffee, millennials appear to be making some progress, particularly when paying off debt. In fact, LendingTree researchers found millennials reduced their average debt between 2019 and 2020 and 2020 and 2021, while baby boomers added debt in both periods.

Though the coronavirus pandemic brought financial turmoil to plenty of Americans, many were able to take advantage of the crisis to tackle debt or add to their savings.

“As a result, millions of Americans put a lot of that extra cash toward knocking down their credit card balances and other high-interest debts,” LendingTree chief credit analyst Matt Schulz says.

Still, Gen Zers maintained a lower average debt balance in 2021 than in 2019. In fact, the young generation’s debt saw the biggest drop — 17% — over the two years. Millennials’ consistent debt payoff pattern helped them take the most dollars off their debt, bringing their balances down by an average of $9,117 since 2019.

Baby boomers take their debt in the other direction

Baby boomers, on the contrary, have increased their balances over the two years. Growing their average debt by 6.7% or $8,848, boomers may not have taken a break from borrowing in two years.

“In most cases, the pandemic wasn’t the economic meltdown for baby boomers that it was for younger generations, so many boomers may have still felt comfortable taking on a little bit of extra debt because they felt secure in their financial situation,” Schulz says.

Low mortgage and personal loan rates may have also made borrowing more attractive in the past year.

Gen Xers similarly increased their average debt balances from 2019 to 2020 but brought their average back down by 2021 for a total deficit of $3,770 over the two years. 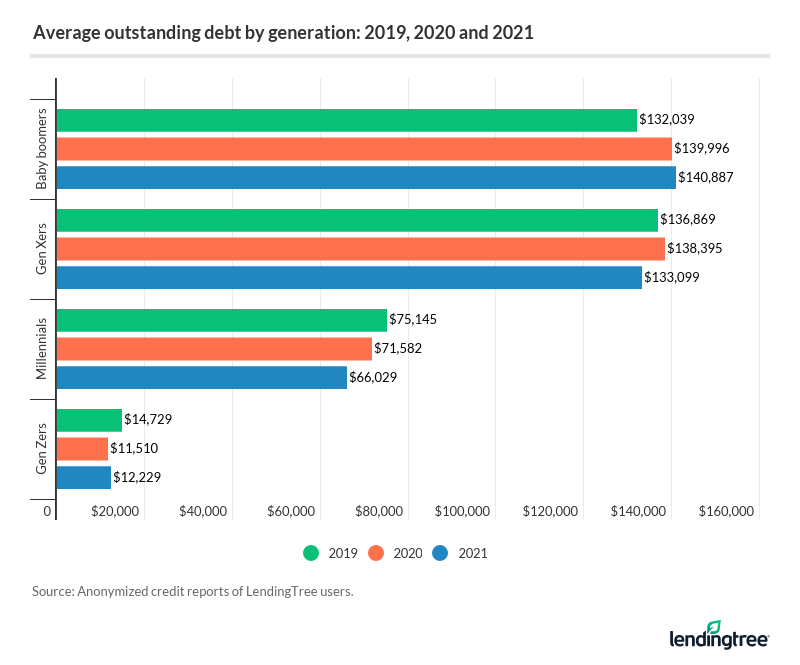 Gen Zers rearranged debt on the way down

Observing the different types of debt owned by each generation may also help explain the shifts in balances. Those born in 1996 or later saw the widest changes in their debt distribution between 2019 and 2021. For example, student loans accounted for 30.2% of Gen Zers’ debt on average in 2019 but shrank to 24.6% in 2021.

With the pandemic-fueled housing market running so hot, it’s not too surprising to see every generation allocating greater shares of debt to mortgages.

As pandemic provisions end, stick with the good habits

Few people probably wish to see another pandemic or other crisis like it in their lifetimes, but the numbers show some of the positive effects of such a widespread catastrophe.

“The truth is that the only time that debt ever really decreases meaningfully in this country is during an economic catastrophe,” Schulz says. “We saw it in the Great Recession, but we saw it in an even bigger way during the pandemic.”

While Americans may not see another stimulus check or unemployment benefits like they did during the pandemic, they can take a few lessons from the experience to keep bringing down their debt.

The generations researchers examined include:

Analysts then compared the average balances from the two time periods.

Millennials reduced their average debt in both one-year periods between 2019 and 2021, while baby boomers increased theirs in both periods.