How Non-Mortgage Debt Has Changed Amid Coronavirus Crisis

Non-mortgage debt levels increased by 2.1% during the first half of 2020 amid the coronavirus pandemic, compared with a 1.8% increase in the first half of 2019. While these increases are relatively similar, there were major shifts within debt categories — particularly credit cards and student loans — according to a LendingTree analysis of more than 1.4 million anonymized credit reports.

Overview of non-mortgage debt in first half of 2020

Credit card balances fell by $76 billion, reflecting decreased levels of consumer spending during the coronavirus crisis, which struck in conjunction with the U.S. officially entering a recession in February. Auto loan balances remained roughly the same, while student loan balances increased by $2 billion after many federal student loan payments were paused through September and more forbearances were granted. 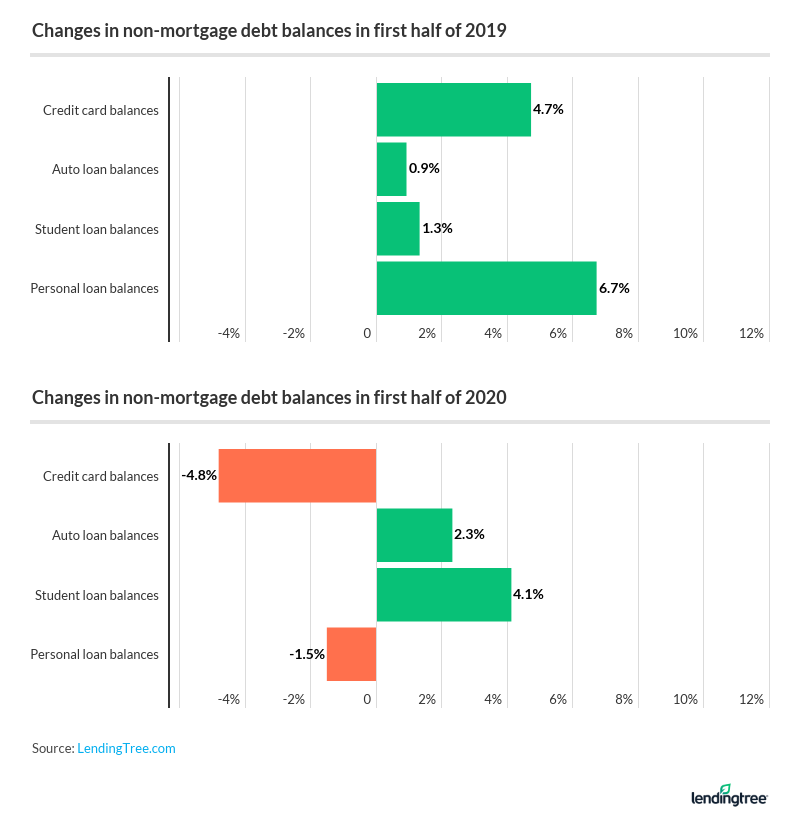 Eighty-four of the top 100 metros saw a rise in non-mortgage debt balances from January 2020 to June 2020, with eight of the 10 with the largest increases being in the South.

While Winston-Salem, N.C., saw the greatest percentage change in overall balance from January 2020 to June 2020, the other metros in the top 10 — except for Stockton, Calif. — started and ended with higher balances than Winston-Salem.

Breaking it down by debt type in those 10 metros:

Metros where non-mortgage debt decreased in first half of 2020

Of  the 16 metros where non-mortgage debt decreased, all are in the West or Midwest, except for Jackson, Miss., and Baltimore.

Jackson had the highest starting and ending non-mortgage debt balance from January 2020 to June 2020, while Grand Rapids, Mich., had the lowest.

Breaking it down by debt type in those 16 metros:

Credit card balances went down by an average of 4.8% over the first half of 2020. Contributing factors included:

This is a big turnaround from an average credit balance increase of 4.7% during the first half of 2019.

Inquiries for personal loans saw some steep week-to-week drops during the first half of 2020, according to our Personal Loan Index. Inquiries hit a low in late April and early May before seeing some slight upticks heading into the second half of the year. Consumers have increasingly been seeking personal loans for home improvements, major purchases and business purposes in the latter portion of the first half of the year.

Other debts have increased

Student loan balances increased by 4.1% during the first half of 2020, compared with 1.3% during the first half of 2019. In a recent Student Loan Hero survey, we found that 42% of federal student loan borrowers would continue monthly payments while they’re suspended through September, while 40% were postponing payments. These borrowers could save the money not used on student loans or pay other debts with it, including rent or mortgage, household bills and groceries.

Elsewhere, an increase in auto loan balances by 2.3% partly reflects a heightened interest in car financing since early April, with the number of auto financing inquiries on the LendingTree marketplace being 92% higher in the final week of May compared to the first week of 2020.

How COVID-19 changed debt landscape — and what borrowers can do

The coronavirus rescue package has prevented many consumers from going into further debt in the first half of 2020 — especially student loan borrowers.

As for auto loan borrowers, lenders may be more lenient amid the coronavirus pandemic, so you can inquire about whether you may be able to:

Those unable to pay personal loan balances should consult their lender or bank to discuss options, including forbearance and payment plans.

Since 2013, household debt has increased in most quarters, reaching its highest amount at the end of 2019 at more than $14 trillion. While COVID-19 has led to major reductions in unsecured debt levels and a large decline in overall household debt as of the second quarter of 2020, whether these debt trends will remain in the long term remains to be seen.

LendingTree analyzed over 1.4 million anonymized credit reports from January 2019, June 2019, January 2020 and June 2020 to determine average non-mortgage debts, as well as the average balances for those who held credit card, auto loan, student loan and personal loan debt within the 100 largest U.S. metropolitan areas. Additional data is from the Federal Reserve Bank of New York.