Where Retirement-Age Adults Carry the Most Non-Mortgage Debt

Many retirement-age Americans carry debt that looms over their finances, making it difficult to stop working and enjoy their golden years. Amid the coronavirus pandemic, many of these older adults may find themselves being forced into retirement early, making financial decisions even more impactful.

Here’s what else we found when we researched non-mortgage debt (auto, credit card, personal loan, student loan and other balances) for retirement-age adults.

Metros where retirement-age adults carry the most non-mortgage debt

The South took at least eight of the top 10 spots in our updated research. Other Southern metros joining the four Texas metros — San Antonio, Houston, Austin and Dallas — in the top 10 were Oklahoma City, New Orleans, Atlanta and Richmond, Va. (If you follow Census Bureau designations, both Baltimore and Washington, D.C., are considered to be in the South, which would make it a full 10 of 10.)

San Antonio was the only of the 50 metros we studied where retirement-age adults had a median non-mortgage debt above $30,000 in the second quarter of 2020. When you look at the types of non-mortgage debt, auto balances accounted for 41.2% of that debt in San Antonio, which is higher than the national average of 36.3%. Previous LendingTree research has shown that Texas residents carry 44% more auto debt than the U.S. average.

Retirement-age adults who live in the West do so with less non-mortgage debt, our researchers found. In the 10 metros where these adults carry the least non-mortgage debt, five were in the West: Seattle, San Francisco, Sacramento, Calif., Las Vegas and San Diego. The South, which was heavily featured in the metros with the most non-mortgage debt, is also represented here with three metros: Memphis, Tenn., Louisville, Ky., and Nashville, Tenn. The Northeast (Providence, R.I.) and Midwest (Detroit) each had one representative.

Nationwide: What debts are these retirement-age adults carrying?

On average, retirement-age Americans in the 50 largest metros held a slightly higher percentage of auto debt (36.3%) than credit card debt (33%). 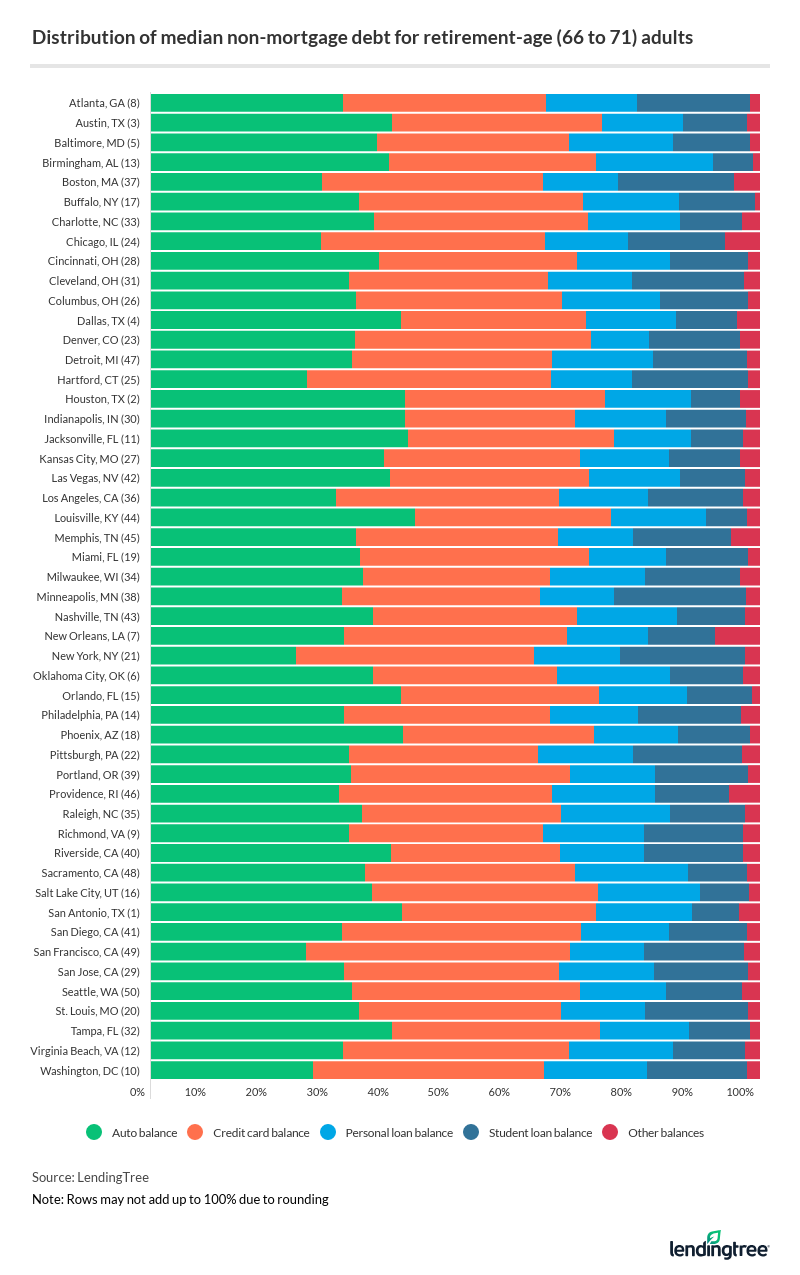 There is wide variation in how much auto loan debt is taken out by metro. Louisville has the highest proportion of auto debt at 43.4%, compared with New York at 23.8%. Access to public transportation could contribute to the large difference for New Yorkers.

About 13% of Americans ages 66 to 71 carry student loans, but it’s probably not their own— instead, it’s more likely that these borrowers cosigned loans or took out other loans for their children or grandchildren.

LendingTree last conducted this study earlier in 2020, looking at data from the fourth quarter of 2019. We’re now in the midst of the coronavirus pandemic and the resulting recession, so things have changed plenty. (As we noted, this isn’t an exact look, since we’re comparing different parts of two years, but it provides a glimpse at the last set of pre-coronavirus data.)

Among the 50 metros we reviewed, the average change was an increase of $480. Here’s a look at the metros with the biggest rise and biggest drop.

In the fourth quarter of 2019, student loan balances accounted for 8.4% of the non-mortgage debt held by retirement-age adults in San Jose. Now, that’s jumped to 15.4%. In March, payments on certain federal student loans were suspended through September (that date has since been extended until Dec. 31, 2020). This could account for the growing percentage of student loan balances in the California city.

The metro also had the largest median household income in 2018 — $124,696 — of any metro in the U.S., so residents may be better able to afford this debt amid the coronavirus crisis. Retirement-age adults who’ve been in the workforce for longer periods could be earning more money to ride out the pandemic.

Memphis residents had the second lowest median household income in 2018 — $50,338 — among the 50 largest metros (New Orleans is right behind at $50,301). Because of this, the drop in debt could have been a result of residents putting their Economic Impact Payment and additional unemployment benefits toward paying down debt.

In addition, the metro had an unemployment rate of 11.9% in June, which is higher than the national average of 11.2%, so many residents could have been receiving those extra unemployment benefits before they expired at the end of July.

Debt management amid a pandemic — and how it affects your retirement

Debt, especially during a crisis and recession, can put an undue burden on retirees. On top of keeping up with regular expenses, such as mortgages and medical expenses, retired workers have to repay debt. But the average monthly Social Security payment was just $1,394.89 as of July 2020, so there’s not a lot of wiggle room when you’re not bringing in an income.

If you’re still able to work amid the pandemic and you want to get rid of some of your debt before you retire, consider these debt management strategies.

Paying the minimum balance on debt, particularly credit card debt, is a surefire way to end up making payments for a long time — and paying a lot of money toward interest. Now, it’s easier said than done to just tell someone to pay more than the minimum balance — especially during a crisis — and have them be able to do so. Older adults are at greater risk from the coronavirus, after all, and this could affect their ability to work during this crisis, depending on their occupation.

But there are various repayment strategies to help pay down debt before you retire if you have the opportunity and ability to do so. These include:

Consolidate debt with a personal loan or credit card

Retirement-age borrowers can consider taking out a personal loan for debt consolidation, which would let them pay down multiple debts with a set monthly payment and a fixed interest rate. That way, you always know how much you owe and when you owe it.

Borrowers who are burdened by debt could also consider applying for a balance transfer credit card for more favorable debt repayment terms. To take advantage of this strategy, apply for a new credit card with an introductory 0% APR period (potentially as high as 18 to 21 months) and pay off the debt before that period expires. Keep in mind that you may be subject to balance transfer fees (around 3% to 5%) and would owe interest on the unpaid balance if you don’t pay off your debt before the end of the promotional period. Plus, not all borrowers will qualify for a credit card.

Talk with a credit counselor to help with your strategy

This might be the hardest option to consider, as older adults may have been handling their own finances for decades already. But borrowers who need help developing a debt management strategy ahead of retirement can seek advice from a credit counselor.

These counselors operate through nonprofit organizations and can help with credit, money management, debt management and budgeting. Many organizations offer free credit counseling sessions. Amid the pandemic, you should first check your options online, since you may not necessarily be able to pop into an office like you could before (and your health could be more at risk).

Find a certified credit counselor through the National Foundation for Credit Counseling or Financial Counseling Association of America. With retirement looming, older adults should make sure the counselor they choose is well-versed on what’s best during this stage of life.

Using an anonymized sample of more than 35,000 LendingTree accountholders born between 1949 and 1954, researchers calculated total debt balances from second-quarter 2020 credit reports. These results were then aggregated to the 50 largest metropolitan statistical areas to calculate median debt obligations (non-mortgage), as well as the average distribution of debts across the following debt types: auto, credit cards, personal loans and student.

LendingTree is a free credit monitoring service available to the general public, regardless of their debt and credit histories, or whether they’ve pursued loans on a LendingTree platform. LendingTree has more than 15 million users.

LendingTree’s Erika Giovanetti contributed to the reporting of this study.

Senior citizens whose income is being eaten up by debt may be more likely to outlive their money. Here’s how to avoid that fate.