We’re settling into a new year with a new administration, led by President Joe Biden and Vice President Kamala Harris, but many of the same housing market trends and issues from years past are along for the ride.

From the dwindling supply of affordable housing locking prospective buyers out of ownership, to the continued trend of historically low mortgage rates coming to an end, a new LendingTree survey finds that consumers have several opinions about the future of housing.

LendingTree gathered responses from more than 2,000 survey participants to gauge their sentiments around homeownership opportunities, location preferences and how the Biden-Harris administration factors into it all.

When asked when they think the real estate bubble will burst and force home prices downward, 41% of survey respondents said in 2021. Another 26% predict this will happen at some point in 2022. Still, more than 1 in 8 (13%) don’t think another housing market crash will ever happen. 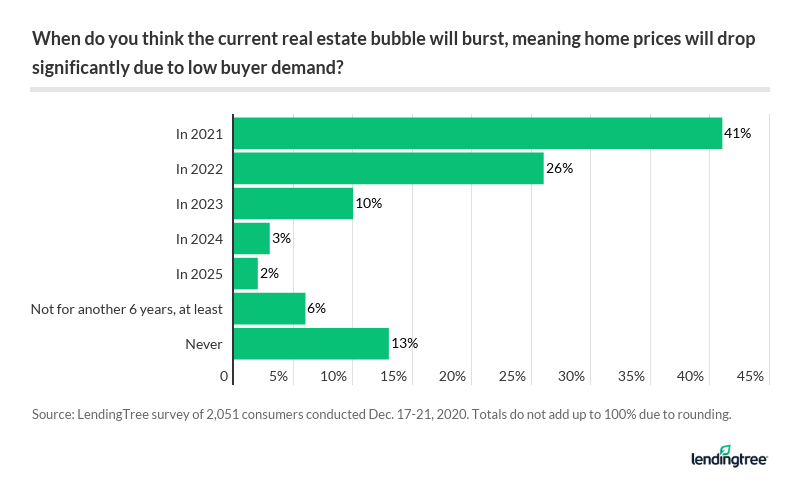 “Though housing heated up late in 2020 and growth is likely to slow in 2021, the idea that it’s a bubble that would burst seems unlikely,” said Tendayi Kapfidze, LendingTree’s chief economist. “The mortgage market is healthier than it was prior to the 2008 crisis, and the government is more experienced with interventions that protect the housing market like forbearance and mortgage modifications.”

A majority of Americans still believe in homeownership

When asked whether owning a home is still part of the American dream, 80% of survey respondents said yes. Gen Xers and baby boomers were slightly more likely to agree than their younger counterparts. 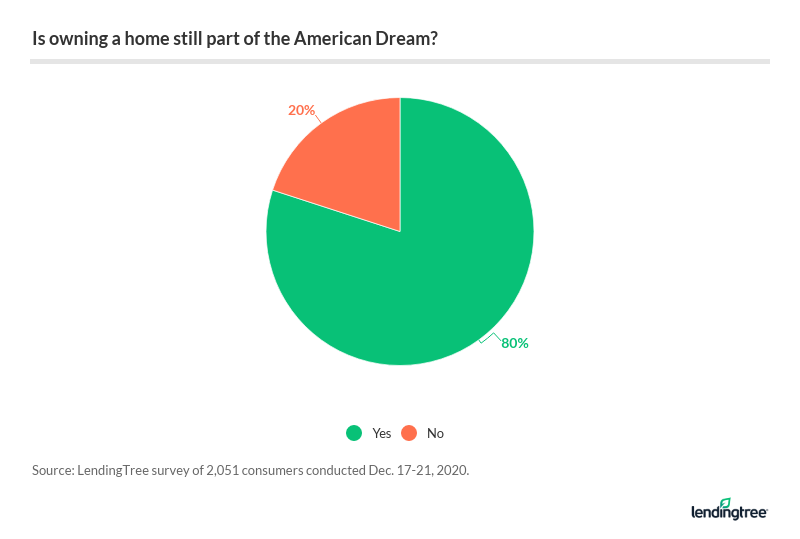 However, the ongoing homeownership gap illustrates that buying a home is a distant reality for many.

“The homeownership rate of 67% shows that many Americans are not achieving this dream,” Kapfidze said. “Homeownership is even lower for Black Americans at 46%, a sad legacy of centuries of discrimination from both the government and private actors in the housing and mortgage markets.”

Before the housing crisis of 2007-08, the homeownership rate peaked around 69%, according to data from the U.S. Census Bureau. 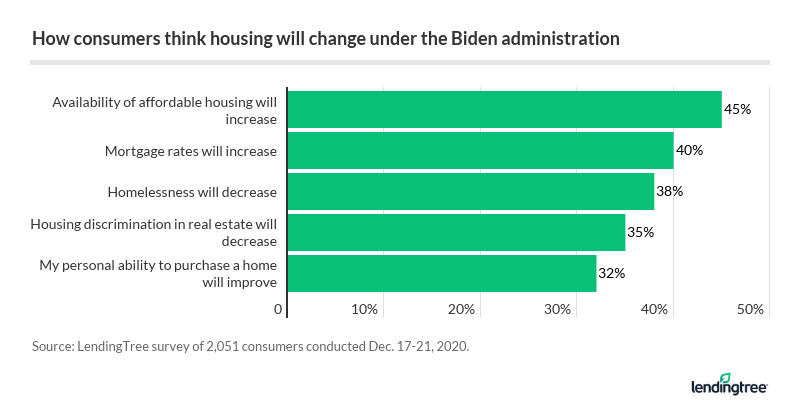 Increasing access to affordable housing is not without challenges. For one, the median home price was $309,800 for existing homes in December, which is a 13% year-over-year increase, according to data from the National Association of Realtors (NAR).

Additionally, housing inventory has been low for quite some time. There’s less than a two-month supply of homes for sale, and for-sale homes typically stay on the market for just 21 days, the NAR said.

Still, many consumers remain optimistic. Almost a third (32%) of respondents believe the Biden-Harris administration will strengthen their ability to buy a home. Democrats are more than twice as likely than Republicans to share this prediction — 45% versus 19%, respectively.

“Biden’s policies are expected to generally be supportive of increasing housing access and affordability,” Kapfidze said. “The Democratic wins in Georgia, which gave them control of the Senate, increase the odds that a fair amount of the campaign promises will make it to legislation. However, it will take time for the policies to have a meaningful effect.”

More than a third expect a mass exodus from major cities

The COVID-19 outbreak has forced consumers to reevaluate their living situation — especially those who work remotely.

More than one-third (35%) of survey respondents predict a mass exodus from metros with a high cost of living to more affordable areas. This prediction is underscored by the fact that a quarter of consumers once preferred to live in the city, but now want a life in a rural or suburban area.

Today’s work-from-home-friendly environment means homebuyers are keeping affordability top of mind as they look to relocate from one metro to another, according to an analysis from Redfin, a real estate brokerage.

But a recent LendingTree study found that the mass exodus may have not arrived just yet — at least for homeowners.

“We found that homeowners are not leaving cities in large numbers. In 2019, an average of 1.91% of homeowners who lived in one of the nation’s 50 largest cities and moved, moved to a town,” Kapfidze explained. “In 2020, that share was 2.18%. Movement by renters is likely occurring at a higher pace as they have more flexibility when making moves.”

3 in 10 Americans predict a rise in mortgage rates

Survey respondents have mixed feelings about the direction of mortgage rates. Almost a third (30%) predict that rates will have increased by this time next year. Another 24% think rates will drop further from their historically low levels.

“With rates at all-time lows, it’s reasonable to expect them to move up,” Kapfidze said. “However, any increase is unlikely to be significant as the Federal Reserve has committed to keep rates low until the job market fully recovers from the COVID-19 economic contraction.”

As of Jan. 21, the national average 30-year, fixed mortgage rate was 2.77%, according to Freddie Mac’s Primary Mortgage Market Survey. During the same period a year ago, the average rate was 3.60%.

Still, nearly half (46%) of respondents believe rates will remain unchanged a year from now.

Another predicted housing market trend revealed in LendingTree’s survey is related to climate change. More than 1 in 5 (23%) survey respondents believe homes will suffer damage from floods and storms due to the impacts of climate change.

When asked if they’d consider buying a home in a high-risk coastal zone:

“Depending on the response, climate change will certainly have an impact on home values in many parts of the country, and especially in coastal zones where increased flooding makes building and buying traditional homes less appealing,” said LendingTree’s Kapfidze. “That being said, infrastructural improvements proposed in coastal areas, as well as home building innovations, could offset some, if not most, of this loss in value.”

LendingTree commissioned Qualtrics, an experience management firm, to conduct an online survey of 2,051 consumers. The sample base was proportioned to represent the overall population, and all responses were reviewed by researchers to ensure quality control. The survey was fielded Dec. 17-21, 2020.

We used the following age ranges to define generations in 2020:

The survey also included responses from the silent generation (ages 75 and older). However, due to the low sample size among that age group, their responses weren’t included in the generational breakdowns.

LendingTree gathered responses from more than 2,000 survey participants to gauge their sentiments about specific housing issues.