43% of Americans Driven Into Debt Over Car Troubles

Your monthly auto loan payment is just a fraction of the true cost of car ownership. Drivers need to consider auto insurance, routine maintenance and gas, as well. But one aspect of car ownership can be much less predictable: car repairs.

About 43% of Americans have gone into debt because of car trouble, and 28% of drivers would not be able to make a $500 car repair without going into debt, a July 2020 LendingTree survey found. See how the cost of car repairs affects drivers in our analysis below.

It’s common to take out debt to purchase a car; 84% of new vehicles were financed in 2020, according to Experian’s Q1 2020 State of the Auto Finance Market report. But it’s also common for American drivers to take out debt when they don’t have the cash on-hand to cover costly, urgent car repairs. Our study found that about 4 in 10 (43%) drivers have taken out debt to cover the cost of auto repairs. 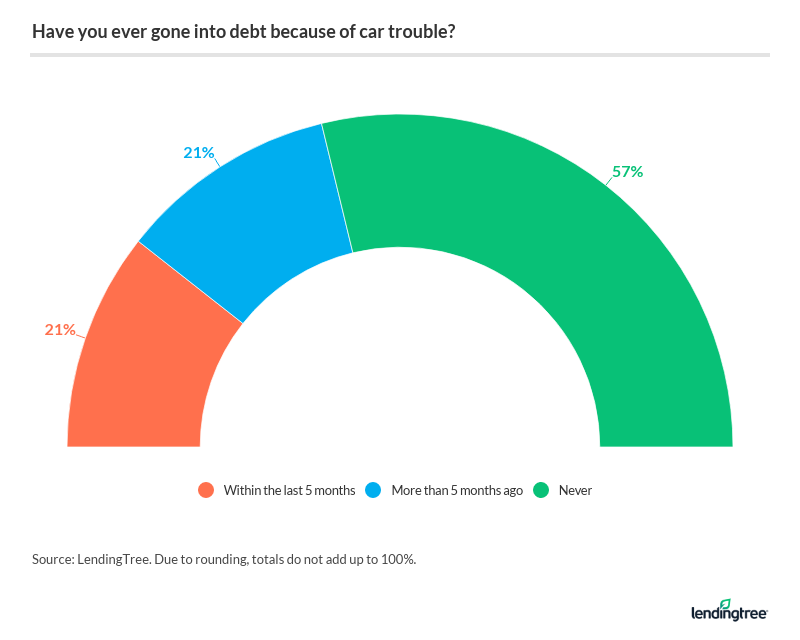 That number spikes to 58% when accounting for just millennials, compared with just 23% for baby boomers. About 1 in 5 (21%) drivers reported that they’ve taken out debt to pay for car repairs in the past five months, since the start of the coronavirus pandemic in the U.S. back in March.

Americans who identify with a racial minority group are more likely to experience financial strain around car ownership than their white counterparts. While 38% of white Americans have been in debt due to car repairs, that number is much higher among Asian Americans (47%), Black Americans (59%) and Hispanic Americans (52%).

Additionally, more than two-thirds of Black and Hispanic Americans respectively, have skipped necessary repairs due to cost constraints, while just over half of white Americans have done so.

The average car repair costs between $500 and $600, according to AAA. Our survey found that 28% of drivers wouldn’t be able to afford a $500 repair if car trouble were to arise tomorrow. That number increases to 34% of respondents who were laid off or furloughed due to the pandemic.

Unsurprisingly, lower-income Americans would have a much harder time affording a last-minute $500 car repair when compared with those with a higher annual household income. Most low-income earners are more vulnerable to an unexpected repair straining their wallet; 56% of those earning under $25,000 and 40% of those earning between $25,000 to $34,999 are unable to cover an unexpected $500 repair. About a quarter of people in these respective income brackets worry about car trouble “constantly.”

Half of consumers report that just under $1,000 is the maximum amount they could afford for a car repair without taking on debt. About 1 in 5 consumers said they could afford a repair of $3,000 or more. See how responses to that question broke down below:

58% of drivers have skipped a necessary repair due to money

The majority of Americans have had to skip a car repair that’s deemed necessary due to financial concerns. These people may have to make a choice between fixing their car and affording other monthly expenses, like groceries and rent. While it’s not an ideal circumstance, our data shows that this is far more common than you may think. 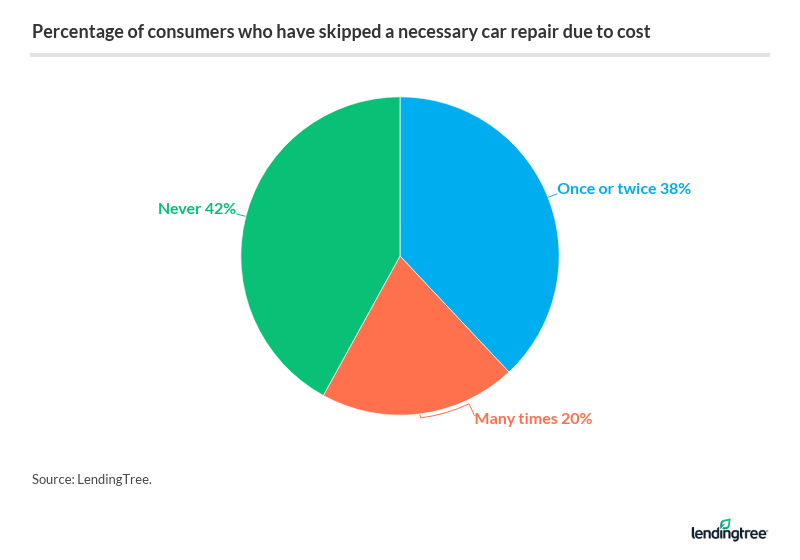 About 1 in 5 respondents said that they had to skip necessary repairs “many times” due to financial concerns. Ignoring repairs may make your vehicle unsafe to drive, or at least make the problem more expensive to fix down the road.

Without making car repairs, many Americans couldn’t get to work

Car repairs may be an unexpected expense, but having a functioning vehicle is necessary for many people who can’t get to work otherwise. Around 16% of respondents can’t get to work without their car, with lower-income Americans being hit the hardest. Our survey found that 3 in 10 of those making $25,000 or less per year wouldn’t be able to make it to work if their car broke down, which could impact their income. 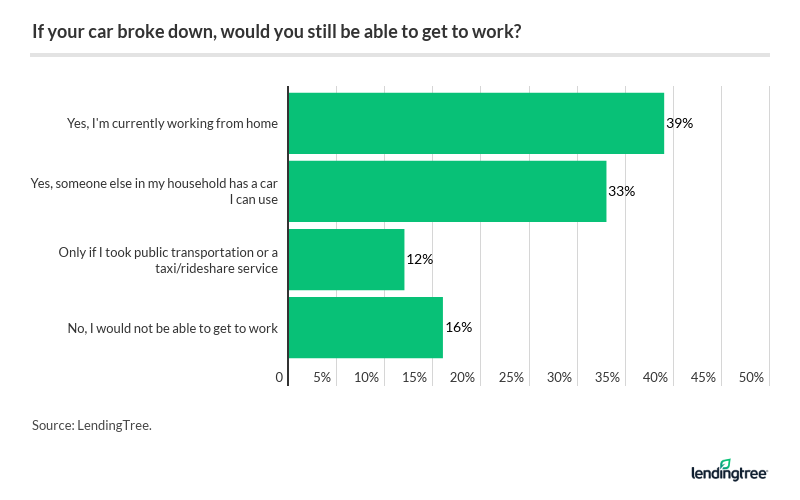 An additional 12% of consumers would only be able to get to work by using public transportation or taxi or rideshare service, which may not be possible or safe amid the COVID-19 pandemic. For what it’s worth, nearly 4 in 10 Americans report that they are currently working from home.

Americans prefer to pay for repairs with cash, credit cards

When it comes to paying for car repairs, it’s best to pay in cash. That way, you aren’t paying the potentially high interest that you may be charged with other financing options, like credit cards and personal loans. Our survey found that about a third of respondents (32%) would use cash or checking accounts to cover the cost of the repair, and 1 in 5 (20%) would pull money out of savings.

While it’s ideal to pay for car repairs in cash, not all consumers have that kind of money stowed away in an emergency fund. More than a quarter of respondents (27%) would charge their credit card, and 4% would opt for a personal loan. 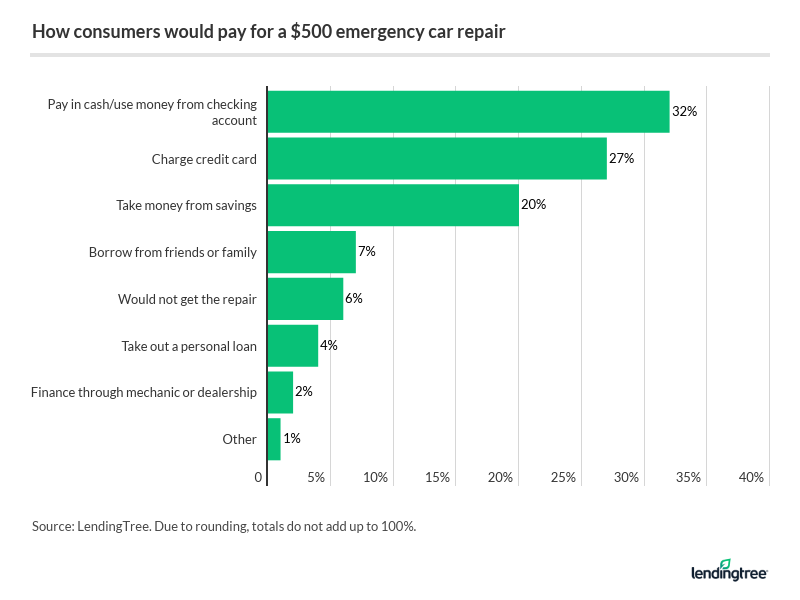 If possible, borrowing from friends and family could be an ideal way to pay for car repairs. Our survey found that 7% of respondents borrowed the money from an acquaintance rather than from a bank or lender. When you borrow from a person you know, you may be able to save on interest – plus, you don’t risk ruining your credit score if you can’t pay the balance back. But before you borrow money from friends or family, you have to think about how the transaction may affect your relationship.

LendingTree commissioned Qualtrics to conduct an online survey of 1,071 vehicle owners. The survey was fielded July 10-13, 2020.

For the purposes of our survey, generations are defined as the following ages in 2020: