The Real Cost of Bankruptcy Lies Within Interest Rates

Bankruptcy is sometimes portrayed as a failure, but in reality, it is more synonymous with credit recovery. More than 58,000 Americans filed for bankruptcy in January 2020 alone, according to the American Bankruptcy Institute. Still, some consumers are hesitant to file for bankruptcy, worried about the stubborn stain it will leave on their credit history and how it can make securing future credit harder.

To determine how bankruptcy affects borrowers, LendingTree analyzed an anonymized sample of over a half million users who requested offers for mortgages and auto loans in Q4 2019. We found that consumers who recently filed for bankruptcy aren’t completely shut out of the market, though interest rates affect their cost for new credit. In fact, more than half of those who filed for bankruptcy one year before visiting LendingTree had credit scores of 640 and higher.

Bankruptcy filers pay more for loans, but they’re not shut out of the market 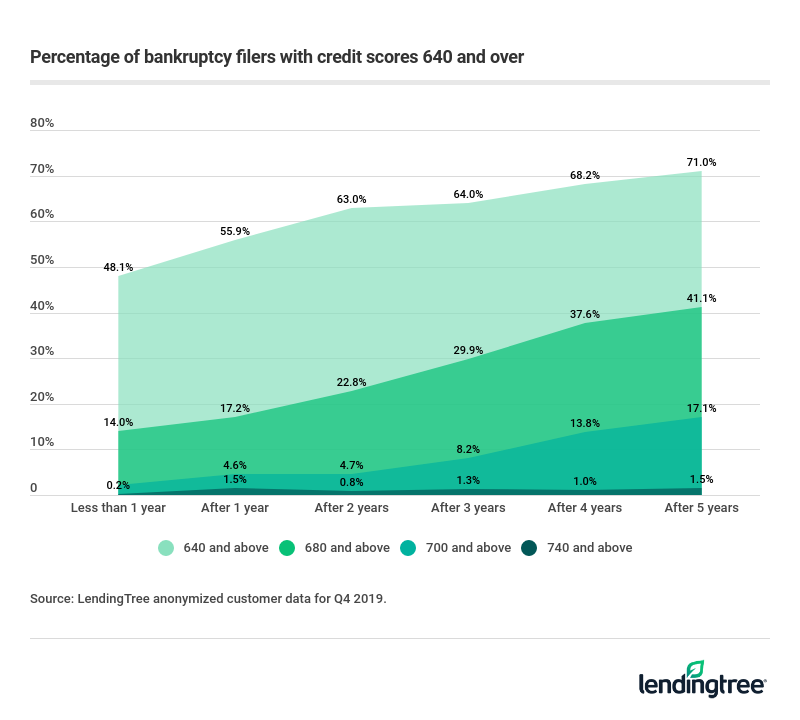 There are plenty of reasons why a person might file for bankruptcy, like insurmountable medical bills or extended unemployment. Consumers might fear using bankruptcy as a tool because they worry that they won’t be able to secure a mortgage or another type of loan in the future. But bankruptcy doesn’t resign borrowers to low credit scores forever.

LendingTree customer data shows that more than half (56%) of all loan applicants who declared bankruptcy had a score of 640 or above just one year after filing. As the graph above shows, the percentage of consumers in all credit bands over 640 increases given enough time.

For the purposes of this study, borrowers must have a prime (640) or better credit score to be considered “mortgage-eligible.” Under these constraints, about seven in 10 people who filed bankruptcy may be eligible for a mortgage just five years after filing. Four in 10 people have credit scores of 680 or higher, and 17% of borrowers broke into the 700 range.

The table below shows just how many borrowers were able to boost their credit scores within five years of filing for bankruptcy.

While many recent bankruptcy filers are able to secure prequalification offers for mortgages and auto loans, they’re liable to pay much more in interest than people who haven’t filed for bankruptcy in the past five years.

As to be expected, people who declared bankruptcy have lower credit scores. This results in less favorable offered loan terms, particularly in the form of higher APRs. Because they generally pay higher interest rates, bankruptcy filers pay more money over the life of the loan than those who haven’t filed for bankruptcy.

Borrowers who recently filed for bankruptcy pay $25,000+ more for a mortgage

Bankruptcy filers could pay tens of thousands of dollars more over the lifetime of a mortgage loan compared with borrowers without a bankruptcy on their credit report. Two years post-bankruptcy, LendingTree customers paid over $25,000 more in interest than those with no bankruptcies on a $250,000 30-year mortgage. Five years post-bankruptcy, that number is cut in half to about $10,000 more in interest.

LendingTree customers who prequalified for an auto loan with a bankruptcy on their record see an increased cost over the life of the loan. Less than one year out from filing for bankruptcy, new auto loan applicants pay nearly $3,000 more on a five-year $25,000 auto loan due to higher APRs. After five years, that number drops to about $2,000.

The data suggests that although APRs eventually go down for auto loan borrowers as time passes after their bankruptcy, they’ll still pay a premium for loans in the form of higher interest rates for years to come.

Auto loan borrowers included in our study needed scores of 600 and above. LendingTree borrowers with scores from 600-639 did qualify for auto loans, but they paid a premium (typically 10%+ APR).

Potential borrowers will generally see lower offered APRs if they wait longer to apply for a loan post-bankruptcy. For instance, auto loan borrowers with credit scores between 640 and 679 will be rewarded with much lower APRs if they apply for an auto loan five years out from a bankruptcy rather than after one year.

For borrowers with credit scores of 720+, the time that’s passed after a bankruptcy doesn’t have as much of a clear effect on the offered APRs. Borrowers who can achieve such high credit scores post-bankruptcy might have other financial advantages that make them stand out as applicants, such as a higher down payment or income.

Despite short-term costs, bankruptcy is still an option for some borrowers

Consumers who are in dire need of debt relief shouldn’t rule out bankruptcy as an option just because of the negative effect it will have on their credit score. Millions of Americans have used bankruptcy as a tool to take control of their finances.

You might want to consider filing for bankruptcy if:

Consumers who are struggling with credit card debt could consider taking out a debt consolidation loan, which may offer benefits like a lower overall APR, faster debt repayment and fewer bills to track.

At the end of the day, people who are struggling with their finances could consider seeking out credit counseling services, which often come at no cost, or speaking with a bankruptcy lawyer.

Note: This content does not provide legal advice. If you are considering filing for bankruptcy, please contact an attorney directly.

LendingTree looked at lending offers for a sample of more than a half million users who requested lender rate offers for mortgages and auto loans in Q4 2019. Individual users are presented with multiple offers from lenders, and these were averaged for each user.

The Real Cost of Bankruptcy Lies Within Interest Rates

A LendingTree study found that consumers who filed for bankruptcy aren’t completely shut out of the market. But rates can affect their ability to borrow.