Whether you believe your credit score reflects your financial responsibility, it plays an undeniable role in your financial health, and lenders do look at it closely. In fact, many Americans — particularly those with poor scores — say their credit score has prevented them from obtaining a financial product in the past year.

Americans denied credit cards, loans and more due to their credit scores

Younger Americans also struggled more than their older counterparts with obtaining financial products because of their credit score. But although this is true for Gen Zers (ages 18 to 25) (48%), millennials (ages 26 to 41) were the most likely generation to say their credit score prevented them from obtaining financial products (57%.) In comparison, just 21% of baby boomers (ages 57 to 76) say similarly.

But what financial products were considered, and which ones were Americans denied most often? While anything ranging from rental applications to mortgages were considered, consumers were most likely to be denied credit cards and personal loans. Take a look at this graphic for further insight: 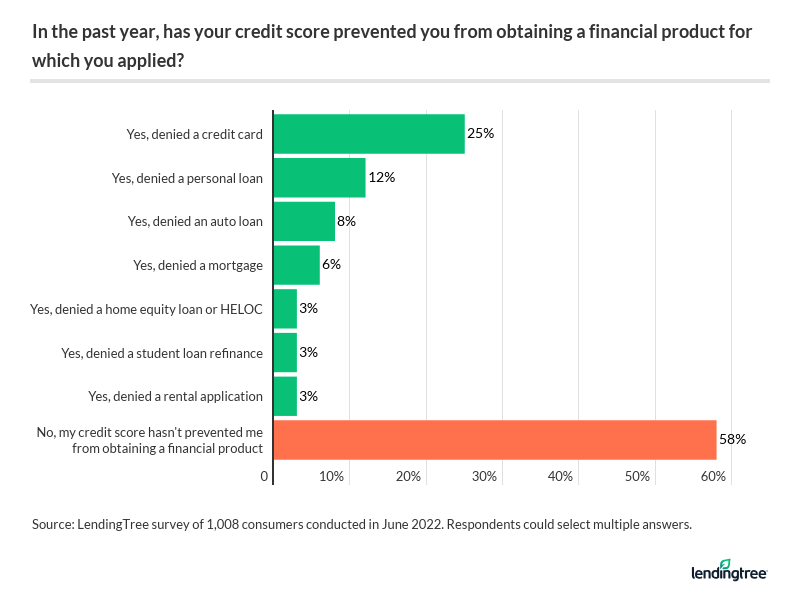 Major credit bureau Equifax has come under fire for sending inaccurate credit scores to lenders for millions of customers applying for home loans, auto loans and credit cards over three weeks earlier in 2022. The error, which reportedly occurred due to a coding issue, changed scores by as much as 20 points in either direction — enough for some prospective borrowers to be rejected for a loan, and altering interest rates for others. This issue was elevated by the Wall Street Journal after first being reported by National Mortgage Professional, a trade publication. 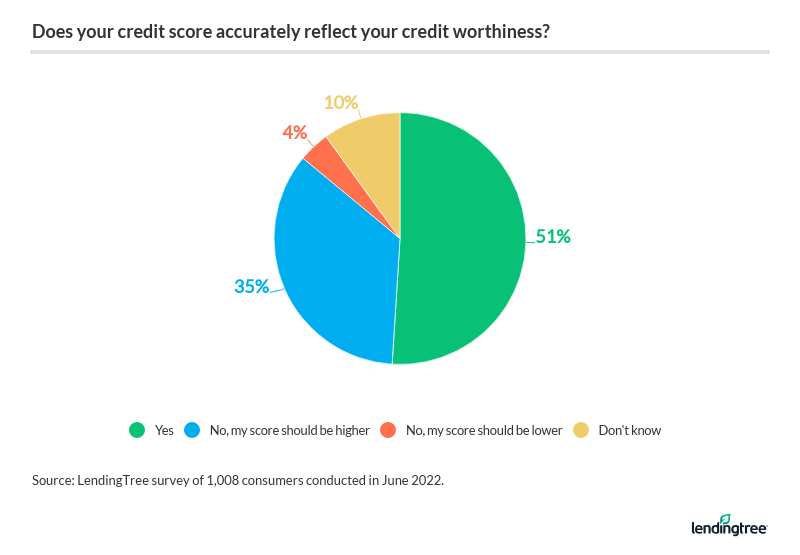 Notably, 9% of Gen Zers believe their credit scores should be lower, making them the most likely group to think their scores overestimate their financial responsibility.

FICO Scores are calculated based on the information in consumer credit reports, but different factors carry more weight than others. Here’s a breakdown of which factors play a role and how much it influences your credit score:

Although payment history is the most important factor in calculating a FICO Score, 50% of Americans don’t know that. Younger consumers are most likely to undervalue the importance of payment history, with 61% of Gen Zers and 60% of millennials incorrectly identifying a different factor as more important. Both are also more likely than any other age group to think that their length of credit history is the most important factor, at 22% for millennials and 18% for Gen Zers. 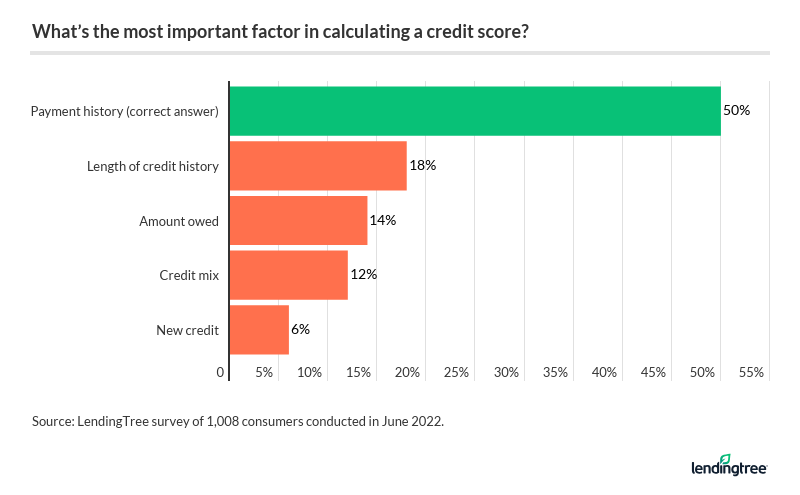 Americans’ discontent with the credit-scoring system and lack of knowledge of how credit scores are calculated comes as more than half (56%) of consumers say their credit scores have changed in the past year. 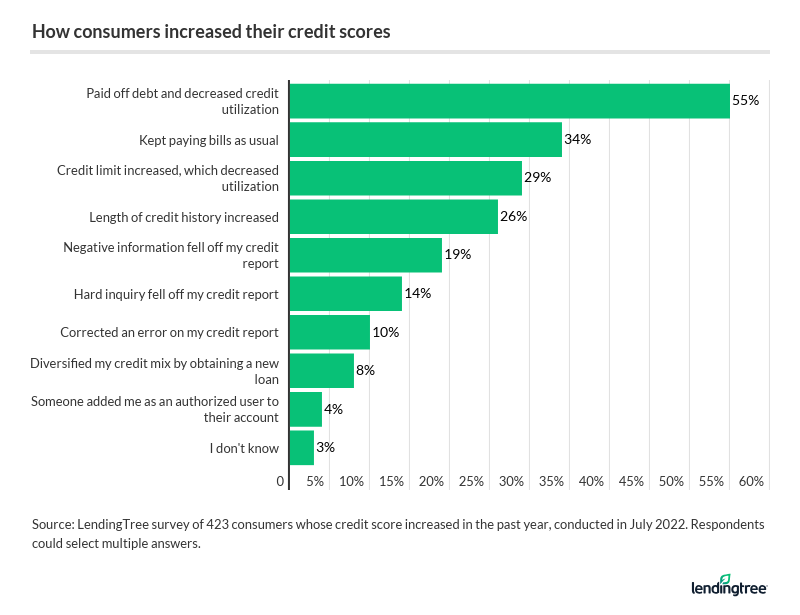 Another 7% said that they don’t know what caused their credit scores to decrease.

Out of sight, out of mind: 44% of Gen Zers don’t know their credit scores 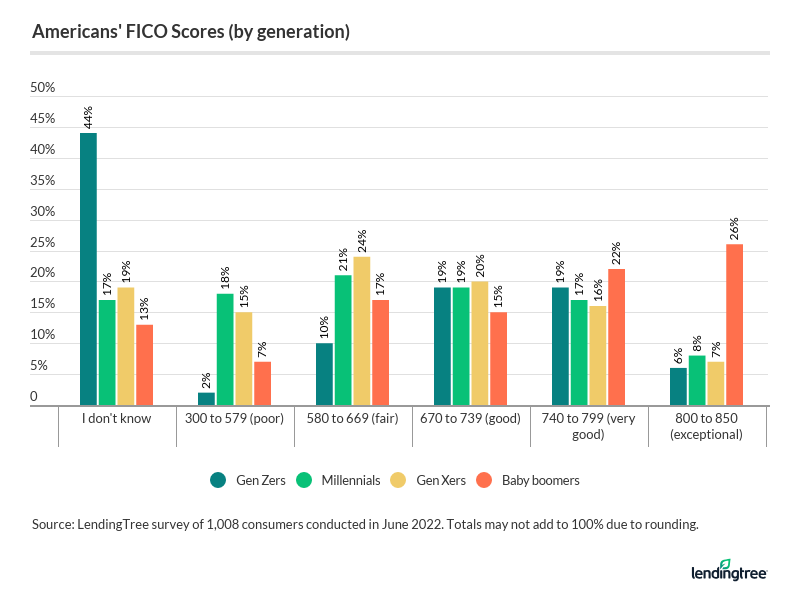 Regarding credit health, 54% of consumers say they keep track of hard credit inquiries, including limiting credit card applications and completing all their loan applications within a particular time frame. And they’re willing to invest in their credit scores, too: Overall, 44% of Americans say they’d be willing to pay for a credit repair service, including 16% who’ve done so before.

The 3 fundamentals for improving credit scores

While credit can initially seem complicated, LendingTree chief credit analyst Matt Schulz says that most people tend to overthink it.

“The truth is that the basics of credit comes down to three things: paying your bills on time every single time, keeping your balances low and not applying for too much credit too often,” Schulz says. “Yes, they can all be easier said than done, but if you do those three things consistently over the years, your credit is going to be just fine.”

Schulz also warns that many credit reports contain mistakes, which may lower your credit score.

“That’s a big reason why it’s so important to regularly check your credit reports from all three credit bureaus (Equifax, Experian and TransUnion),” Schulz says. “Having a good credit score is hard enough. The last thing you want is for someone else’s goof-up to keep you from having one.”

For those struggling with debt, consider investing in professional services such as debt counseling. Under the guidance of a professional, you can take steps to improve your credit score by consolidating your debt or developing a debt management plan.

LendingTree commissioned Qualtrics to conduct an online survey of 1,008 U.S. consumers, fielded June 17-20, 2022. The survey was administered using a nonprobability-based sample, and quotas were used to ensure the sample base represented the overall population. All responses were reviewed by researchers for quality control.

High-Credit Score Borrowers Take Out Personal Loans 122% Larger, on Average, Than Others — Here’s Where They’re Spending the Most

Borrowers with credit scores of 720 and above take out personal loans that average far higher than those taken out by people with lower credit scores.

READ MORE
What Is a FICO Score?

You might have heard the term FICO Score — whether in a credit card commercial, on an account statement or when applying for credit. Learn about it here!