The coronavirus pandemic has caused financial hardship for many, but it’s disproportionately affecting people of color, a September 2020 LendingTree survey of more than 2,000 Americans found.

Asian, Black and Hispanic Americans are more likely to worry about paying for necessities like food and shelter during the pandemic when compared with white Americans. People of color also reported losing income and paying bills late at higher rates than their white counterparts.

See how the pandemic has affected people of different racial groups in the analysis below.

People of color worry most about paying for food, shelter

While money isn’t everything, a person’s financial situation dictates how comfortably they can live. Food insecurity and housing insecurity are exacerbated in times of shared hardship like the coronavirus pandemic.

People of color in America report having a harder time affording necessities like food and shelter. While 48% of Americans as a whole worried about buying food at least once in the past two weeks, food insecurity was more prevalent among people of color: 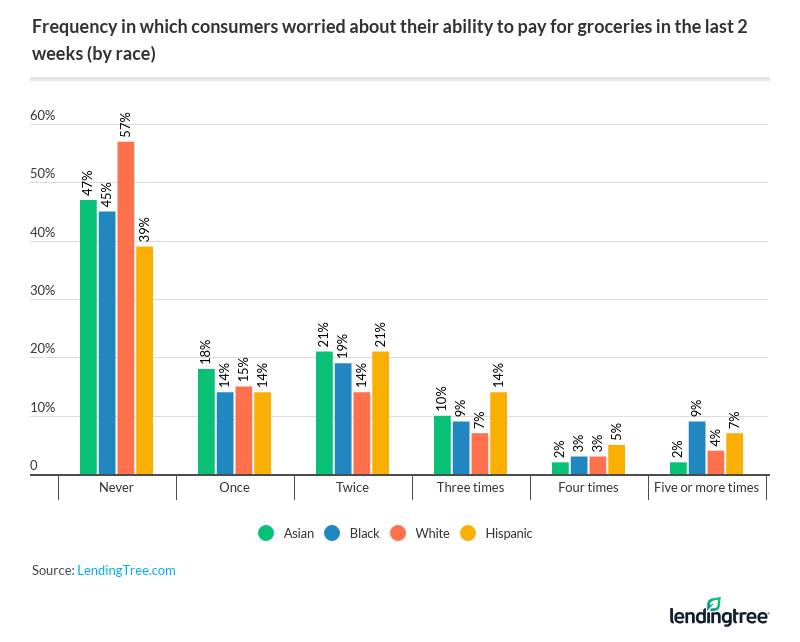 People of color also had a more difficult time affording housing costs. Our survey found that 46% of all Americans worried about their ability to pay their rent or mortgage during the pandemic, and white respondents experienced this feeling at a much lower rate:

While only 16% of Americans as a whole report that they’ve worried about their ability to pay rent or their mortgage during every month of the pandemic, about a quarter (23%) of Black Americans said the same. 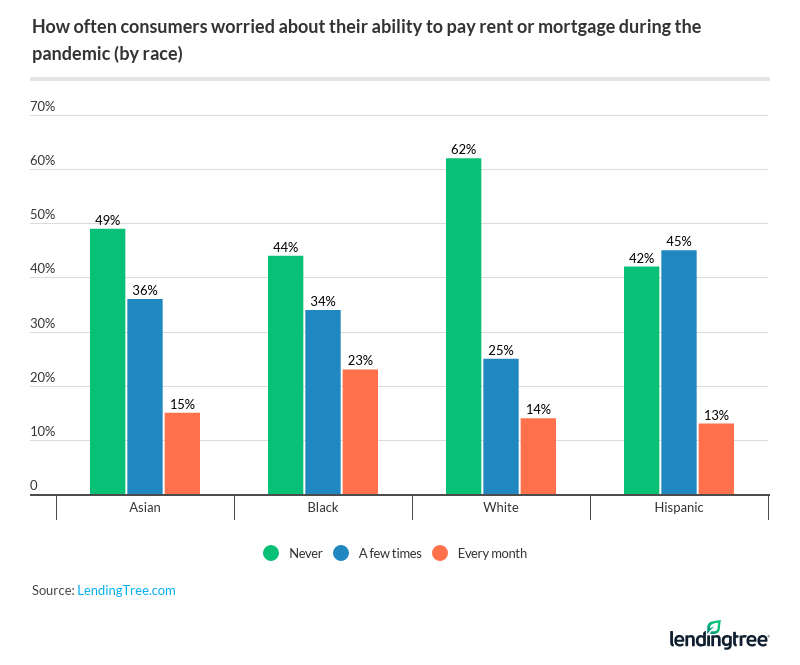 Need help? If you’re worried about being able to pay your mortgage or rent due to the coronavirus pandemic, explore your relief options.

Between furloughs, layoffs, reduced pay and reduced hours, the coronavirus pandemic has had a tangible impact on the earning potential of many Americans. Affected families have had to adjust to the reality of tighter budgets and less household spending.

Comparatively, people of color have lost income at higher rates than their white counterparts. Six in 10 Hispanic Americans have lost at least some part of their income due to the pandemic, compared with less than half of white workers, for example.

White Americans are least worried about their ability to pay bills

White Americans are far more confident in their ability to pay upcoming bills than people of color. About three-quarters (73%) reported that they will definitely be able to pay all their bills due in the next month, compared with 56% of Asian Americans, 49% of Black Americans and 42% of Hispanic Americans.

Black and Hispanic Americans were also twice as likely as whites to respond that they would definitely not pay all of their upcoming bills in full. See a detailed breakdown below: 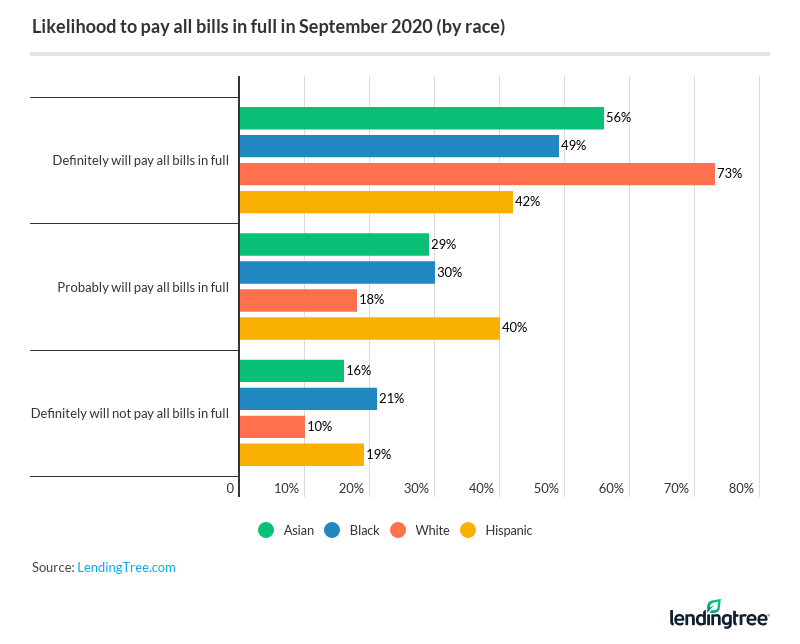 In addition to considering the ability to pay next month’s bills, we also asked respondents if they made any late payments on past bills. Just under half (49%) of Americans have made a late payment on their bills since the coronavirus pandemic began. For Black and Hispanic Americans, that number is higher: about 63% and 60% respectively were forced to make a late payment at least once.

Blacks, Hispanics looked for other jobs at a higher rate

As a way to mitigate lost or reduced income from their primary jobs, some workers have signed up for side hustles like grocery and food delivery. Others have had to find new or higher-paying jobs just to make ends meet. People of color have had to look for another job at a higher rate than white Americans:

Workers in the Black and Hispanic communities have been most affected in this way; they’re searching for another job at a rate that’s twice as high as whites.

Child care costs weigh most heavily on women of color

Schools are still remote in many parts of the country, which leaves working parents with a choice: Do you pay for child care or risk losing income by staying at home to care for the kids?

Our survey found that many parents worry about the cost of child care amid the coronavirus pandemic, but Black, Hispanic and Asian mothers are much more likely to experience anxiety over the matter than white mothers.

The most effective way to stop the spread of COVID-19 is to avoid exposure to the coronavirus by staying at home and practicing social distancing. While many people have the option to work remotely, some Americans have jobs that must be done in-person. For people who have to report on-site, it’s impossible to avoid at least some risk of exposure, if they want to get paid at all.

Just over a third of Americans are currently working from home, our survey found, but white and Asian Americans have the opportunity to work remotely at higher rates than Black and Hispanic Americans. 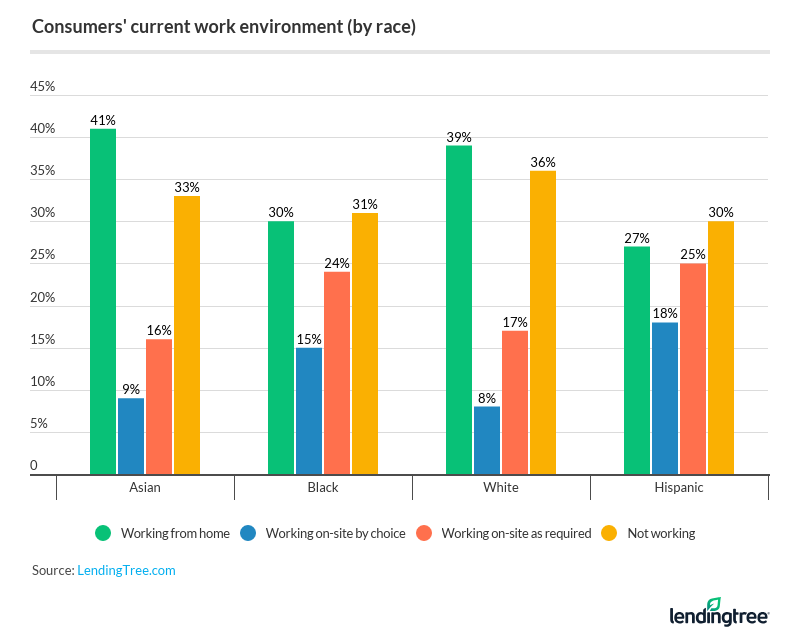 White respondents are “not working” at the highest rate, 36%. However, whites are the least worried about affording food and shelter. Conversely, people of color answered that they are working at slightly higher rates, but that they’re still having a harder time paying bills.

LendingTree commissioned Qualtrics to conduct an online survey of 2,011 Americans, with the sample base proportioned to represent the overall population. The survey was fielded Sept. 4-11, 2020.

The coronavirus pandemic is disproportionately impacting the finances of people of color, a LendingTree survey found.