Consumers’ saving and spending habits have changed dramatically amid the coronavirus pandemic. With shutdowns and quarantines leading people to spend more time at home, savings surged and Americans paid down debt. As a result, personal loan inquiries from potential borrowers to pay off debt declined sharply.

While personal loan inquiries for credit card refinancing and debt consolidation are still only about half of what they were in late March 2020, the newest LendingTree analysis shows that nearly half of all consumers who took out personal loans in the past year did so to manage existing debt. But despite the spike in these types of personal loans, consumers sought more funding, on average, for home improvement projects.

Why people took out personal loans in the past year

Almost half of the consumers who took out personal loans on the LendingTree platform in the past year used the funds for debt payoff. About one-third (33.5%) of consumers used a personal loan to consolidate debt, while 13.3% used one to refinance credit card debt. 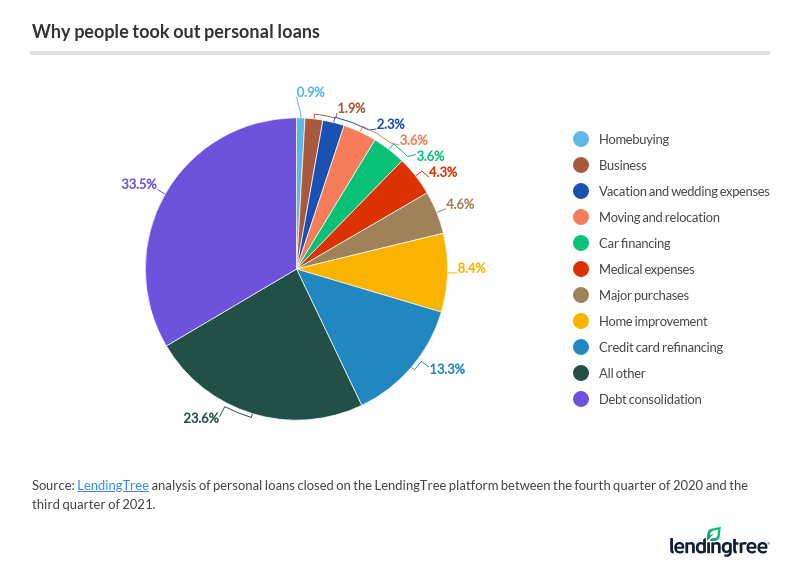 In contrast, less than 5% of consumers took out personal loans for vacation and wedding expenses in the past year.

“That’s not surprising at all, given the travel issues we’ve all been facing for the last two years,” Schulz says.

Meanwhile, less than 2% took out personal loans for business expenses. But with the federal government’s expansive COVID-19 aid to businesses, this figure suggests that those in need of funding were able to find it elsewhere.

Home improvement borrowers the most likely to take out personal loans

Of those who inquired about personal loans through the LendingTree platform, consumers looking for funds for home improvement projects were the most likely to complete the application process and take out a loan.

Consumers looking to consolidate debt were the next most likely to take out a personal loan, followed by those looking to refinance credit card debt, as well as vacation and wedding expenses.

Again, this aligns with pandemic spending habits: In addition to paying off debt, consumers have also spent more on home renovations. Those who inquired about loans for homebuying, business expenses or car financing were the least likely to close the loan.

Not only were home improvement borrowers the most likely to take out personal loans over the past year, but they also borrowed the most on average at $12,564.

“We’ve all been spending a lot more time at home over the past two years, so it makes a lot of sense that people would focus their time and money on remodeling and improving their homes,” Schulz says. “The problem is that it can be superexpensive. Because of those sky-high costs, many people look to personal loans to help them.”

Home improvement loans were, on average, larger than loans for debt payoff — the reason why nearly half of all borrowers took out personal loans over the past year. Credit card refinancing and debt consolidation averaged $11,187 and $9,608, respectively. 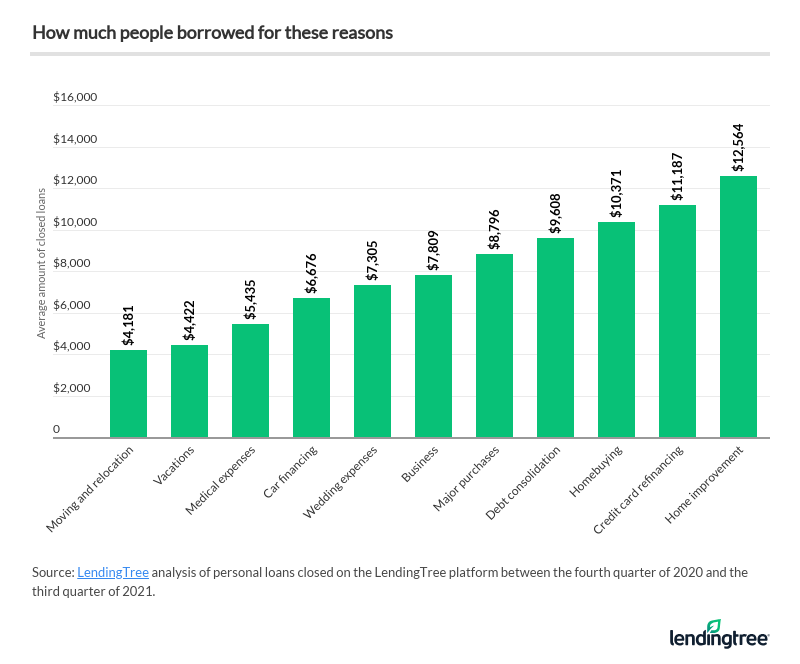 “Today, people don’t necessarily need to relocate to start that new job or new career,” Schulz says. “Remote work is far more common now and will likely be a bigger part of our lives even once the pandemic is behind us.”

Meanwhile, borrowers from Southern states were among the least interested in taking out loans for debt consolidation. Arkansas, Mississippi and Louisiana each only saw 20% of borrowers express interest in taking out loans for this purpose. Debt consolidation was still the reason with the highest percentage of inquiries among borrowers within these states, though at about 10 percentage points lower than the three highest named above.

Notably, while borrowers in the District of Columbia were among those least interested in home improvement projects, those who did take out loans for this purpose took out the highest amount overall — $31,500.

Texas metros among those most interested loans for medical expenses, New York and Connecticut metros the least

Although medical expenses were the reason for only 4.3% of personal loans nationwide, they make up a growing share of personal loans. However, borrowers from metros across the U.S. vary widely in interest in taking on loans for medical costs.

Among the top 20 metros with the largest percentages of borrowers seeking personal loans for medical expenses, Texas claimed the most spots. Beaumont, Corpus Christi, Houston, Dallas, San Antonio and Austin were all toward the top at around 6%.

In contrast, metros in Northeastern states feature prominently in the bottom 20, or those with the smallest percentages of borrowers inquiring about personal loans for medical expenses. Connecticut and Massachusetts both had three, Pennsylvania had four and New York had five. Notably, New York’s five metros (Rochester, Buffalo, Syracuse, Albany and New York City) are all in the bottom 10, with percentages below 4% (3.1% to 3.7%).

4 reasons to get a personal loan

Personal loans can be flexible, whether you seek them for car repairs, major home renovations or weddings. And with personal loan interest rates that can often be lower than credit card APRs, they can offer more affordable ways to finance major expenses.

Here’s a few common reasons why to take out a personal loan:

“A personal loan is super useful because it can save you a lot of money while simplifying your financial life at the same time,” Schulz says.

Researchers reviewed online forms filled out by people inquiring about personal loans on the LendingTree platform between the fourth quarter of 2020 and the third quarter of 2021, as well as the terms of closed loans during that period.