Taxpayers Claim Nearly $17,000 Per Year in Medical Expenses — See Where Your State Ranks

Health care often comes at a high cost, which may explain why U.S. taxpayers who itemize their federal and state tax returns deduct an average of $16,970 annually in medical expenses. But residents of some states pay much more or less than that, according to a new LendingTree study.

LendingTree researchers analyzed the most recently available IRS data — from tax year 2018 — to determine how much money taxpayers deduct in medical expenses on both the federal and state levels. Here’s what researchers learned.

The cost of health care is a burden on many households, but tax season can offer some relief to those who pay medical bills throughout the year. The IRS allows taxpayers to deduct medical expenses, such as hospital bills, copays and medical care-related transportation, as long as the total cost of those expenses exceeds 7.5% of their income.

Of all taxpayers who choose itemized deductions over the standard deduction, about a quarter (25.5%) of them claim health care expenses. 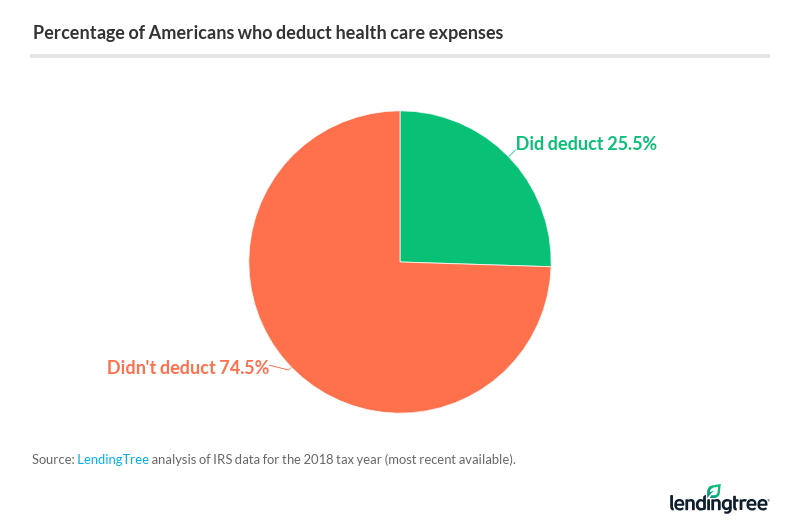 Those who deduct health care payments from their taxes can reap thousands of dollars in benefits. On average, taxpayers who itemize their returns claim $16,970 in medical and dental expenses. In some states, residents deduct much more in health care expenses than in others.

Did you know? 44% of Americans who are in debt due to medical bills don’t know they can deduct medical expenses from their taxes, according to a recent LendingTree survey.

Where people claim the most (and least) health care expenses

LendingTree analysts broke down the IRS medical deduction data by state to determine where residents claim the most and least health care expenses. See what researchers found in the interactive map below:

People who live in the Dakotas claim the most health care expenses. North Dakota residents who itemize their taxes claim $28,313 in health care expenses. In South Dakota, the average is slightly lower at $24,355, though that’s still well above the national average of $16,970. Iowa rounds out the top three at $22,694.

Utah residents claim the least health care expenses at $12,984, which is about half of what people claim in North Dakota. Residents of Georgia and Mississippi also claim much less when compared to other states.

Taxpayers in some states are more likely to deduct medical expenses

LendingTree’s research team looked at the percentage of tax returns that included medical deductions, finding that some of the states where people claim the most health care expenses are also states where people most frequently deduct medical expenses. South Dakota, North Dakota and Iowa are examples of this.

Taxpayers are least likely to deduct medical expenses in the District of Columbia (17.4%) and Hawaii (17.5%). In Utah, where people claim the least health care expenses annually, just 18.4% of taxpayers who itemize their deductions choose to include medical care expenses.

Americans with higher incomes are more likely to itemize their taxes, but they’re less likely to claim health deductions when doing so. Nearly 78% of taxpayers with an adjusted gross income (AGI) above $1 million itemize their returns, but just 0.5% of those returns claim medical and dental deductions. 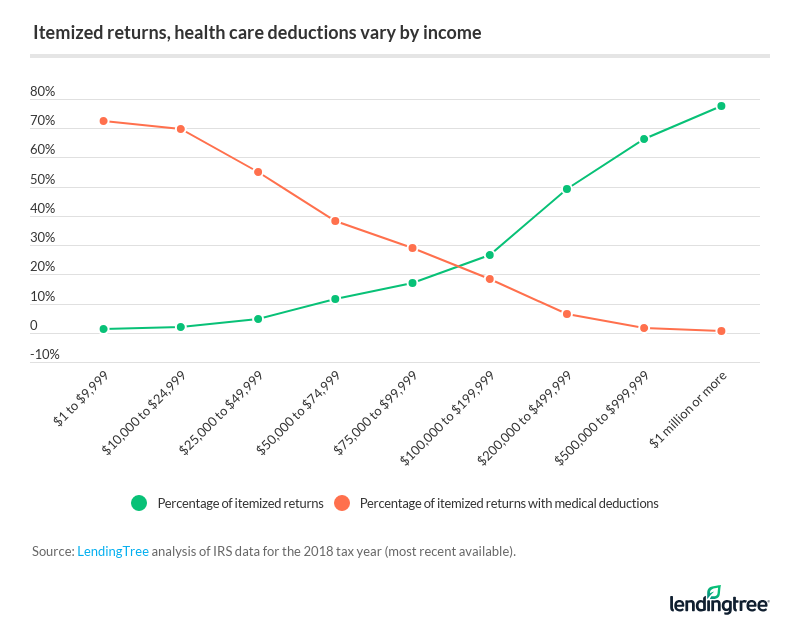 By contrast, just 1.3% of taxpayers with AGIs of less than $10,000 choose to itemize. And of those itemized returns, 72.5% claim medical or dental deductions. 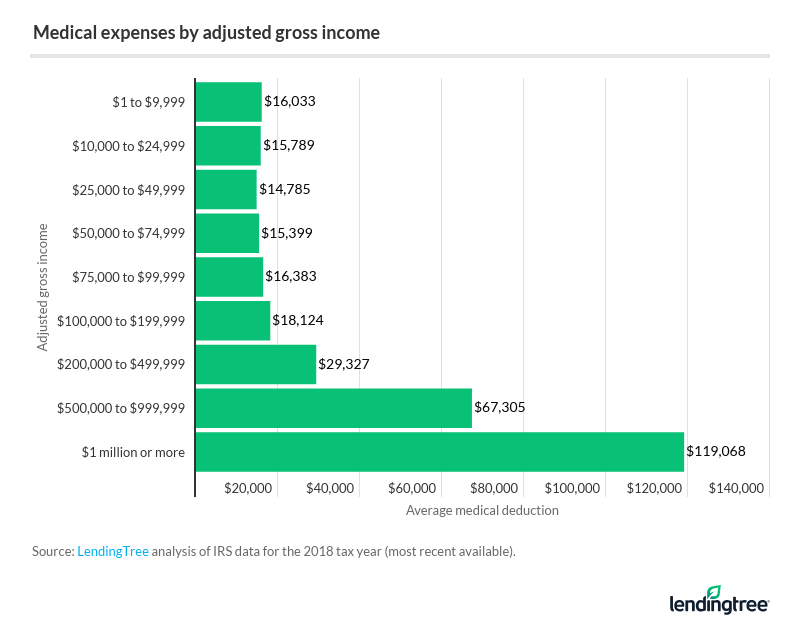 How to deduct medical expenses

This year, the federal government has extended the federal individual tax filing day from April 15 to May 17, 2021. If you still haven’t filed your tax return or are looking for more information, here’s how to deduct medical expenses.

You’re only able to deduct total medical expenses that exceed 7.5% of your adjusted gross income, so it’s important to account for all your eligible medical costs when preparing your taxes. You can deduct medical payments for the following in tax year 2020:

The list doesn’t end there, though. You can deduct the cost of prescription glasses, contacts, hearing aids, false teeth, service animals, wheelchairs and other medical essentials. You can include medical and dental bills you paid in 2020 for yourself, your spouse and all dependents you claim on your return, as well as certain nondependent parties, such as children of divorced parents.

You may not deduct funeral expenses, nonprescription medication, toothpaste, toiletries, makeup or most cosmetic surgery, among other expenses.

Keep a file of all your medical expenses throughout the year

When you deduct medical expenses from your taxes, you’ll have to do the math yourself if you don’t hire a professional tax preparer. Keeping all your receipts in one place will make it much easier when the time comes to prepare your taxes and add up your medical expenses.

If you’re working retroactively, see if you can get a list of your claims for the tax year in question through your health insurer. Those claims aren’t receipts, so you may not be able to use them if you’re audited, but it’s a good place to start since it’s a record of your doctor visits and prescription orders. You can call your medical provider and/or pharmacy to get receipts if you no longer have them.

Fill out Schedule A and attach it to your Form 1040

Medical and dental expenses can be deducted using Schedule A (Form 1040). This form includes all itemized deductions, including medical costs, state and local taxes, mortgage interest, charitable gifts and other tax-deductible expenses.

Medical and dental expenses are in the first section of Schedule A, and the IRS gives instructions on how to calculate the deduction. Line 1 requires the total of all your tax-deductible medical expenses throughout the year.

While you don’t need to send the IRS receipts for your medical expenses, you should keep them until the statute of limitations is reached for your tax returns, which is usually 10 years from the date of the tax assessment. These will be necessary if the IRS conducts an audit.

LendingTree researchers analyzed the most recently available IRS data from tax year 2018 to estimate how much people who itemize their taxes claim in health care expenses. Specifically, researchers looked at the medical and dental expense deduction for people who itemize their taxes. Researchers found the percentage of itemized returns that had medical deductions to determine the average size of medical deductions by state, which was used to create rankings.