As Credit Reporting Agencies Remove Most Medical Debt From Credit Reports, Up to 45% of Americans Could Benefit

The choice to seek medical care isn’t often a choice — anyone who’s ever experienced a medical emergency or dealt with a chronic, long-term illness knows this to be true. But even with the foresight to plan out medical treatment well in advance (such as with an elective surgery or health screening), many patients are still left with hospital bills they can’t pay.

These patients could get some help on July 1, 2022, when the three nationwide credit reporting agencies say they’ll remove nearly 70% of medical debt from credit reports. This could be great news for the 23% of Americans with medical-related debt and the 22% who have previously had it, according to an updated LendingTree survey of more than 1,100 Americans.

Most medical debt to be removed from credit reports

Medical debt can weigh as heavily on a household’s budget as any other debt, such as credit card debt, auto loans or even student loans.

But this type of debt will soon have a more limited impact on Americans’ credit reports, according to a March 2022 announcement from the three nationwide credit reporting bureaus — Equifax, Experian and TransUnion.

Millennials and parents of minor children are followed by:

The 23% with medical debt is a substantial drop from the 37% in last year’s survey (see the full 2021 survey below). It’ll be interesting to see which way this trend goes next year, with Americans having a collective $88 billion in medical debt on their credit reports (as of June 2021).

Medical debt is a costly burden on Americans’ finances

Whether you’re scheduling a mammogram or calling an ambulance in an emergency, it should be a no-brainer to seek medical treatment when you need it. But Americans who can’t afford medical care might think twice before visiting a doctor to avoid getting stuck with debt over it. 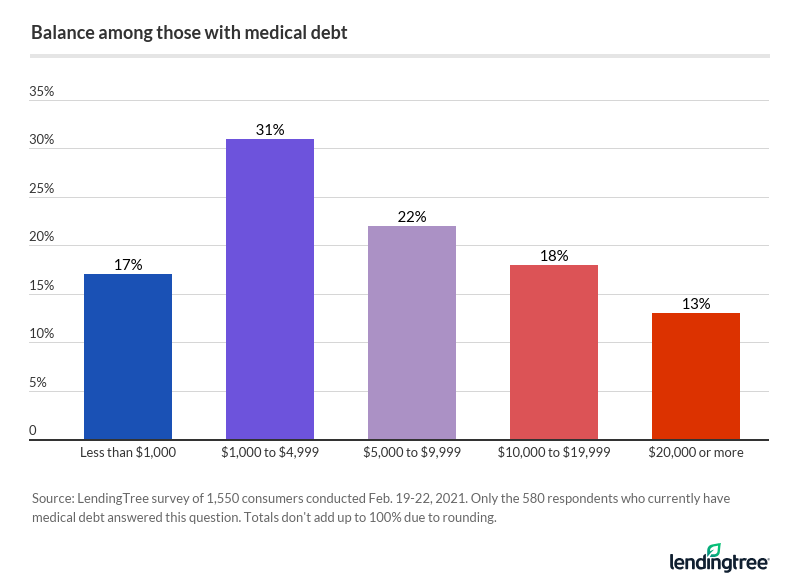 Medical debt affects virtually everyone, but it can be most burdensome for the people who need chronic treatment, such as patients with cancer, heart disease or diabetes. Long-term illnesses can keep patients in and out of the hospital, and the only thing they know for certain is that they’re getting a bill at the end of their visit. Of those with medical debt, 82% said they or a member of their household have an underlying health condition.

Medical debt holds Americans back from buying homes, having kids

The cost of medical care may prevent people from seeking the services they need in the present, but it can also prevent them from planning for the future. In particular, 72% of those who have had medical debt said it prevented them from achieving key milestones, including:

Medical debt is also a source of anxiety and stress for those who carry it — the majority of those in medical debt (68%) have lost sleep worrying about it.

If you’re seeking emergency medical care, you may not have time to ask how much the ambulance ride will cost or if the health care provider is in your network. Emergency room visits are the leading cause of medical debt, leaving many patients with a hospital bill after getting life-saving care. 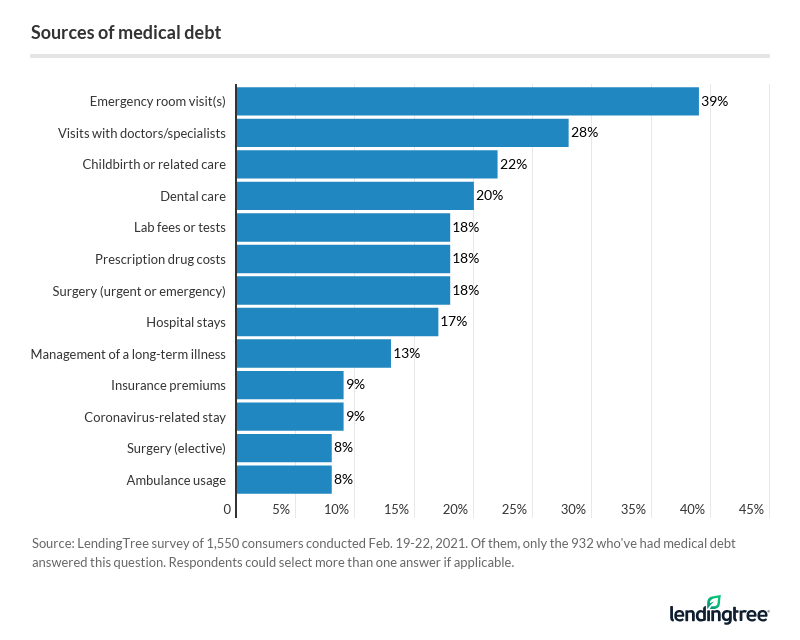 Visits with a doctor or specialist also contribute to a good portion of medical debt in America. Specialists can come with higher copays, and some services like tests and lab fees may not be fully covered by insurance. For example, a dermatologist visit may be considered elective, leaving the patient responsible for out-of-pocket expenses even if they’re testing a suspicious mole for cancer.

Childbirth costs round out the top three causes of medical debt. The cost of childbirth in America can range from $10,000 to $30,000 or more.

Notably, the coronavirus pandemic is responsible for about 1 in 10 patients with medical debt.

How Americans paid off their medical bills

Among those who’ve already paid off their medical bills, here’s how they did it:

When tax season comes around, you may be able to deduct money used to pay for medical or dental care, up to 7.5% of your adjusted gross income. This is an effective way for families to save money on the cost of health care — however, 44% of those with medical debt didn’t know they could deduct it from their taxes.

Most try to negotiate their medical bill, with a high success rate

Most of those with medical debt (75%) tried to negotiate their medical debt, though older consumers were least likely to negotiate. Of those who have negotiated a medical bill, 66% did so themselves, while 26% used a service to help them and 9% had another family member negotiate on their behalf. 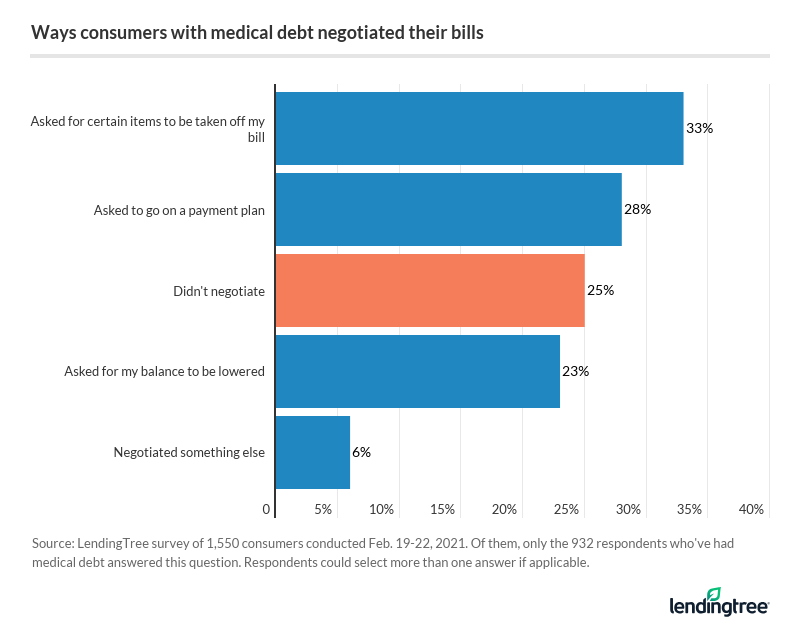 When you attempt to negotiate your medical bills, there’s really nothing to lose — the vast majority of those who tried to negotiate were at least partially successful. 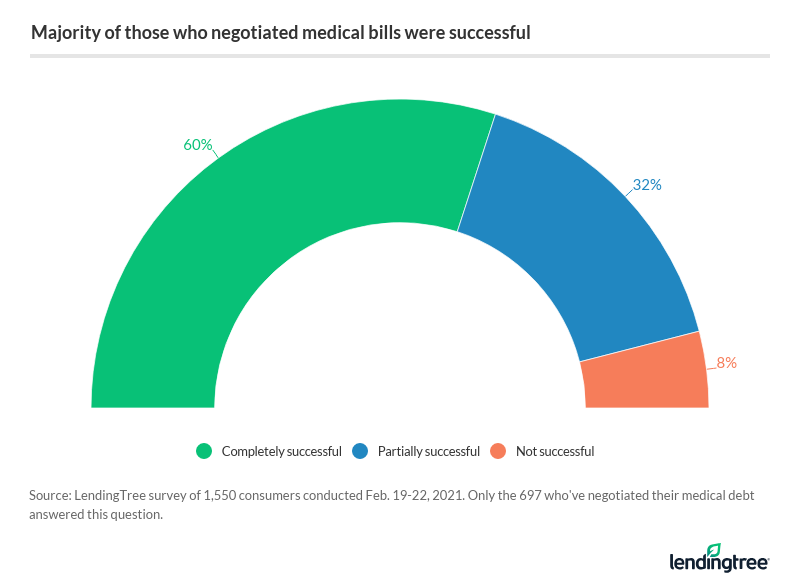 Here are a few tips for negotiating medical debt:

LendingTree commissioned Qualtrics to conduct an online survey of 1,162 U.S. consumers, fielded May 16-23, 2022, for updated data regarding the percentage of Americans with medical-related debt. The rest of the data comes from a survey of 1,550 U.S. consumers, conducted Feb. 19- 22, 2021. Both surveys were administered using a nonprobability-based sample, and quotas were used to ensure the sample base represented the overall population. All responses were reviewed by researchers for quality control.

For the portion of the survey from last year, we defined generations as the following ages in 2021:

As Credit Reporting Agencies Remove Most Medical Debt From Credit Reports, Up to 45% of Americans Could Benefit

More on the impact on Americans as the three nationwide credit reporting agencies remove nearly 70% of medical debt from credit reports.