In the six U.S. cities with the highest transit use, interest in auto loans amid the COVID-19 pandemic has grown at a faster rate than in the rest of the country, LendingTree researchers have found.

With average loan amounts of $35,637 for new vehicles and $20,969 for used vehicles (per Experian), a purchase isn’t a small commitment. From New York to San Francisco to Chicago, each city tells a different story during the COVID-19 crisis.

New Yorkers were more likely to inquire about auto loans in May, by a difference of 69 index points, than the rest of the U.S. The city began to diverge from national inquiry trends earlier, in March. The Big Apple has the highest citywide commute cost in the U.S. 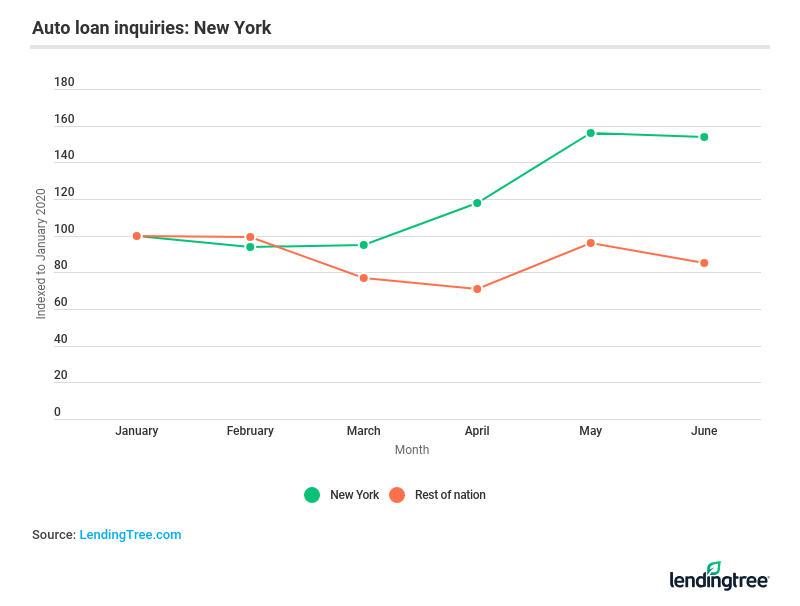 Jersey City followed a different trajectory than New York, with car inquiries plunging in April. (New Jersey’s governor issued a stay-at-home order on March 21.) Inquiries fell below the national index by seven points in April but reversed course in May. Auto loan inquiries in Jersey City jumped month over month by 122.9% in May, the biggest percentage change among the cities highlighted. 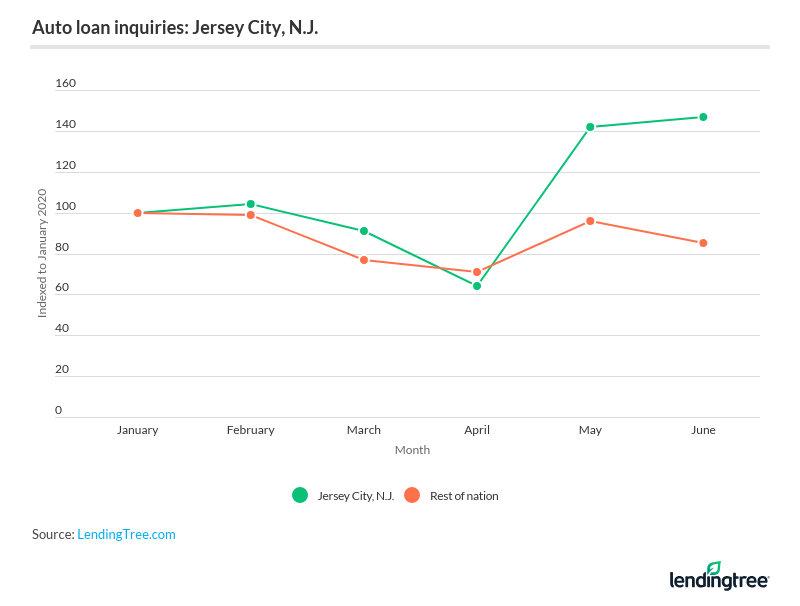 Look at the chart below to see a ton of similarities between auto loan inquiries in Washington, D.C., and throughout the rest of the U.S. In March, for example, both the city and U.S. indexes fell 23 points below January levels. The city also saw a noticeable month-over-month rise in May by 61.1%. 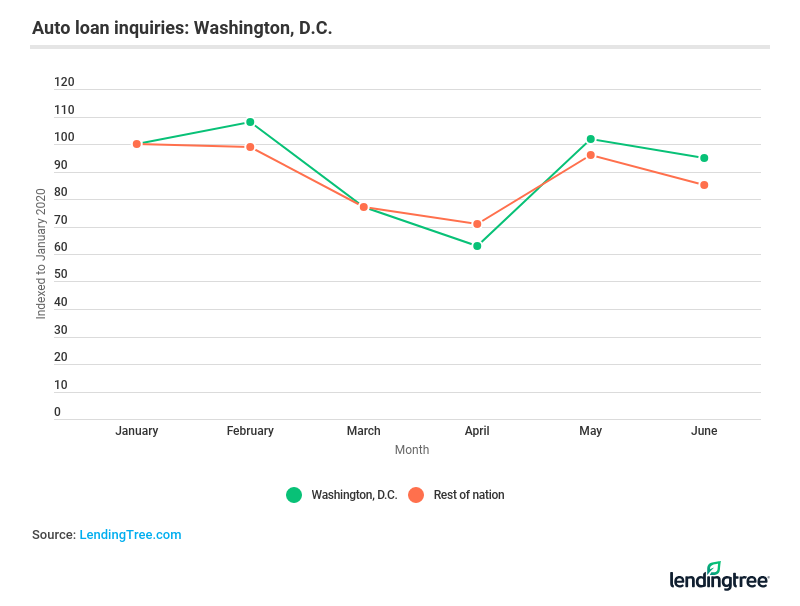 San Francisco’s index followed a similar up-and-down pattern as the national trend — until May and June, when there were index differences of 45 points. Interest in auto loans amid the beginning of the coronavirus — March and April — fell below January levels. 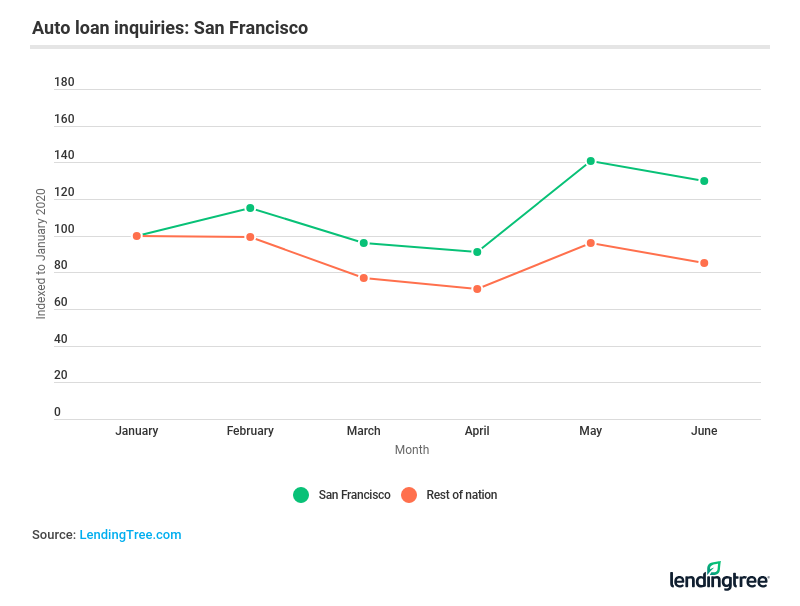 Boston had the fifth-highest percentage of commuters who used public transportation in 2018, according to the Census Bureau. LendingTree researchers included the city among the six with the highest public transportation ridership, but we didn’t feel the sample from our marketplace was robust enough to include a meaningful month-over-month comparison here.

Chicago didn’t show much of an elevated interest in auto loans compared to the U.S. as a whole, but it’s the city on our list with the highest number of households who already have a car. Inquiries were the same as national index levels in May and June, showing the most difference at 11 index points higher than national inquiries in April. 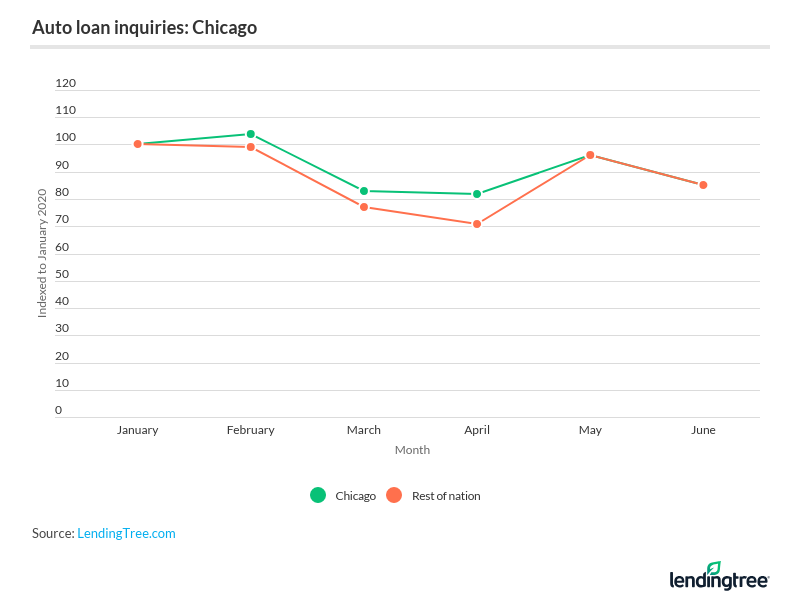 Why our national index differs from previous reports

In previous reports, we focused on changes in auto loan inquiries that came to our platform through organic means. In other words, borrowers who came to our site directly or through an online search.

For this analysis, we weren’t comfortable with the sample sizes of each city highlighted above from just organic search, so we opened it up to all prospective borrowers who came to our site. This shows a somewhat different pattern overall. While we prefer the other to give a stronger sense of American sentiment, we feel this is appropriate for comparing the locations of prospective borrowers.

Public transportation guidelines amid the pandemic

Cities with the highest public transportation ridership showed a much higher growth in interest in auto loans than the rest of the U.S.