43% of Americans Expect to Add Debt in Next 6 Months, Especially Parents With Young Children

Amid a 40-year inflation high, borrowing is getting more expensive. Last month, the Federal Reserve raised the federal funds rate by three-quarters of a percentage point, its biggest hike in nearly 30 years. Consequently, lenders of various types are raising their rates — but despite this, many Americans expect to add debt in the next six months, according to the latest LendingTree survey of more than 1,000 U.S. consumers.

What does that indicate? According to LendingTree chief credit analyst Matt Schulz, it’s not necessarily a bad sign.

“The truth is that debt can be either a sign of confidence or struggle, and I suspect we’re seeing the effect of both of those in our data,” he says. “Many people take on debt because they feel good about their financial situation and aren’t too worried about paying a little interest if it gets them what they want or need. Plenty of others take on debt because they have to. There’s no question that both situations are happening right now.”

Of those who expect to take on debt during the second half of the year, parents with children younger than 18 are most likely to do so (58%). Creditworthiness also plays a role in a consumer’s likelihood of taking on debt. Those with credit scores from 670 to 739 — rated good by FICO — are more likely to take on debt, at 56%.

FICO credit scores differ from VantageScores. While both rate credit scores on a scale of 300 to 850, the categories within are different. For example, 781 is considered an excellent score by VantageScore, but it’s very good (one tier lower) by FICO. Ranges within this survey are based on FICO scores — more to come on the specifics.

By age group, younger consumers expect to take on debt more than older consumers. Take a look at the breakdown:

Credit cards are the most common source of future debt for consumers — just over 2 in 10 (22%) consumers expect to take on credit card debt. This is particularly true for those with good FICO scores between 670 to 739 (33%) and parents with underage children (30%). Following credit cards, 1 in 10 (10%) expect to take out an auto loan, though men (13%) are more likely to be planning for future auto loans than women (7%).

Unsurprisingly, Gen Zers plan to take on school-related debt more than any other age group — 21% expect to take out a student loan, ranking it second-highest for this generation outside of credit cards (25%). Additionally, 11% of parents with underage children plan to take out a personal loan, making them almost twice as likely to do so than the average American (6%).

Views on debt differ by generation 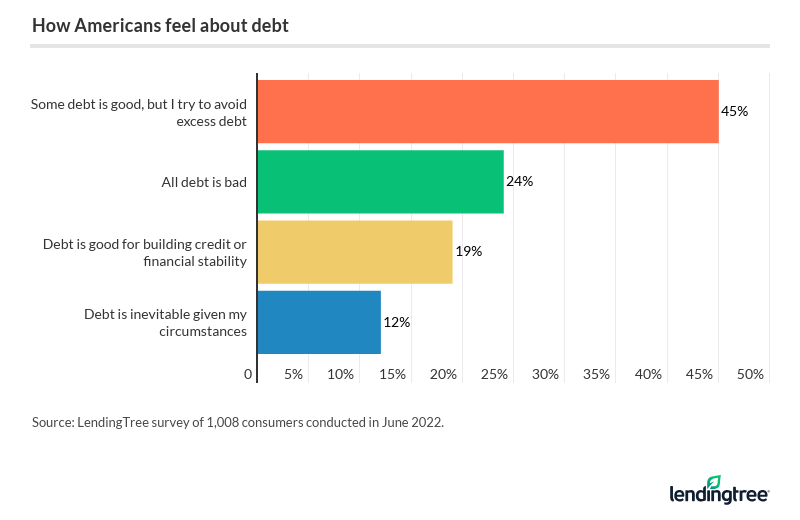 With that said, most consumers are uneasy about taking on debt. Overall, 60% of Americans would rather use cash or savings to cover a purchase, particularly consumers with poor FICO scores between 300 and 579 (69%) and millennials (67%). While Schulz says paying with cash is often a great idea, he cautions against leaving money on the table while inflation is rampant.

“The better move is to pay for purchases with a credit card and then use that cash to pay the card off in full every month,” Schulz says. “If you can manage to do that, it really is a best-of-both-worlds situation. You get card rewards to help you extend your budget, and you can get them without going into any debt along the way.”

“Debt can be absolutely devastating, of course,” he says. “It can ruin lives, in no uncertain terms. However, those who swear off all forms of debt forever may end up limiting their potential in the future. It may sound good in the short run and be done with the best intentions, but sometimes you have to take on a bit of risk to reach greater success.”

3 in 5 consumers dealing with debt

While many plan to take on debt in the future, the majority of Americans (61%) are already dealing with it. Gen Xers (70%) are the most indebted age group, but baby boomers (65%) and millennials (65%) aren’t far behind. Meanwhile, only a quarter (25%) of Gen Zers have debt, though this may be because they haven’t had enough time to build debt compared to older generations.

Credit cards are the top source of debt here, too, as 70% of indebted consumers have a credit card balance. That’s followed by auto loans (33%) and mortgages (29%). Medical debt ranks fourth overall, but consumers with poor credit scores are particularly likely to owe medical debt — 35% of this group owes for this reason, compared with 10% of those with exceptional credit scores. 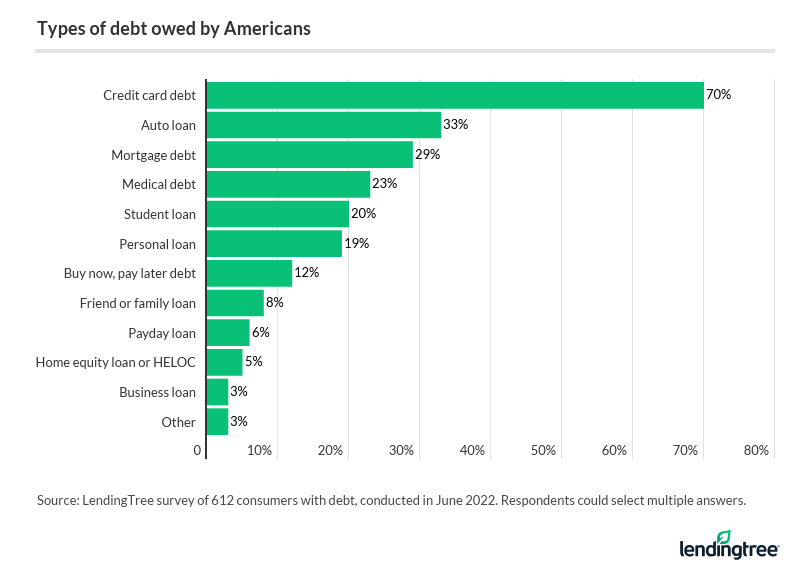 Though just 12% owe buy now, pay later (BNPL) loans, millennials (20%) have more of this type of debt than any other generation.

Generally, most consumers are going into debt to cover vital expenses. In fact, necessities (30%), emergencies (26%) and health or medical issues (25%) are the most common reasons consumers are in debt. 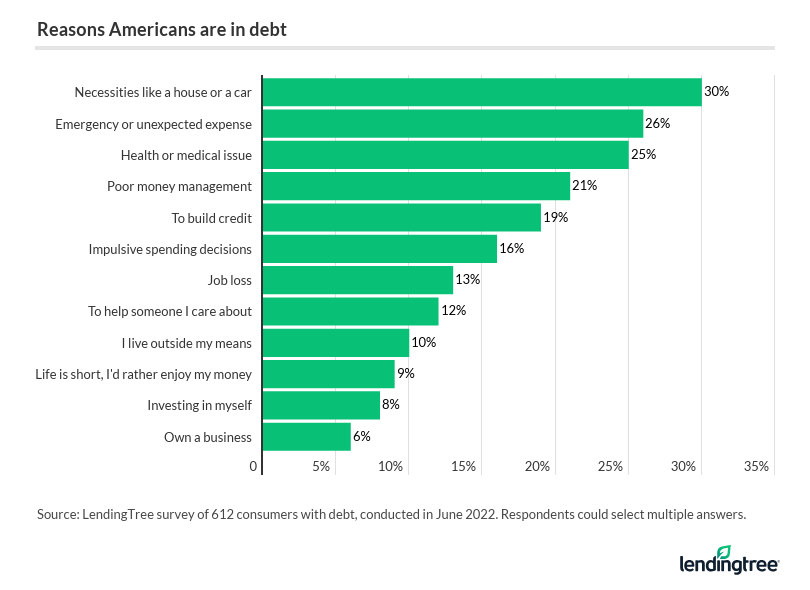 Consumers with poor credit scores from 300 to 579 are the most likely group to cite health or medical issues (34%), and they’re also more likely to cite poor bad money management skills (35%). Meanwhile, among those with annual household incomes of $75,000 to $99,999, 16% say life’s too short to not enjoy money — and for six-figure earners, 28% say their debt is a result of impulsive spending decisions.

Additionally, a quarter (25%) of indebted Gen Zers and millennials say they’re doing it to build credit. However, carrying a credit card balance won’t help your credit score — though a recent LendingTree survey on credit card mistakes found that 65% of consumers believe it does. It’s more important to pay off your credit cards in full every month.

Best way to pay off debt: What consumers think vs. what’s worked 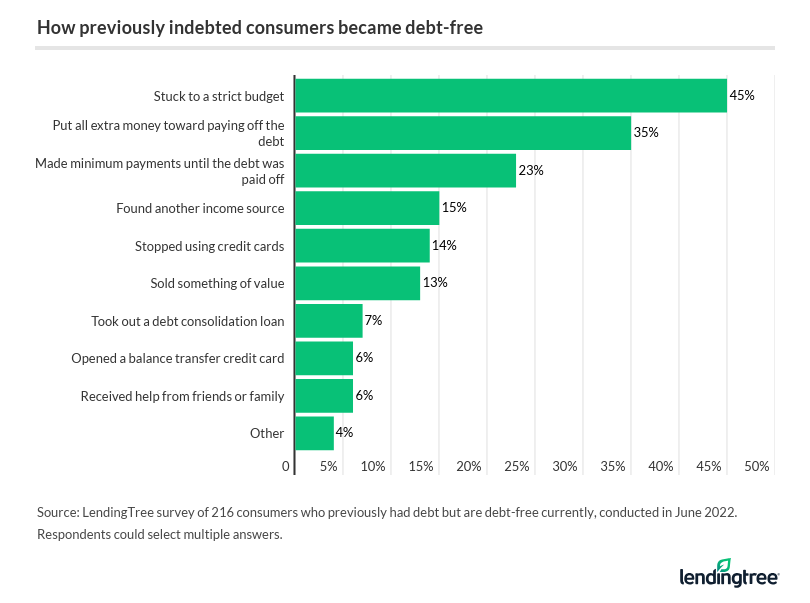 But that’s not what the majority of indebted consumers think works. While 45% agree that increasing monthly payments (either in frequency or amount paid) is the best way to get out of debt, just 16% think budgeting works.

Debt snowball vs. debt avalanche: Consumers split down the middle

The two most popular methods to make debt payments are:

Consumers generally don’t prefer one over the other — across all those surveyed, both methods tied at 50%. However, women (52%) and Gen Zers (52%) are more likely to prefer the debt snowball method, while men (53%) and Gen Xers (53%) opt for the debt avalanche method. 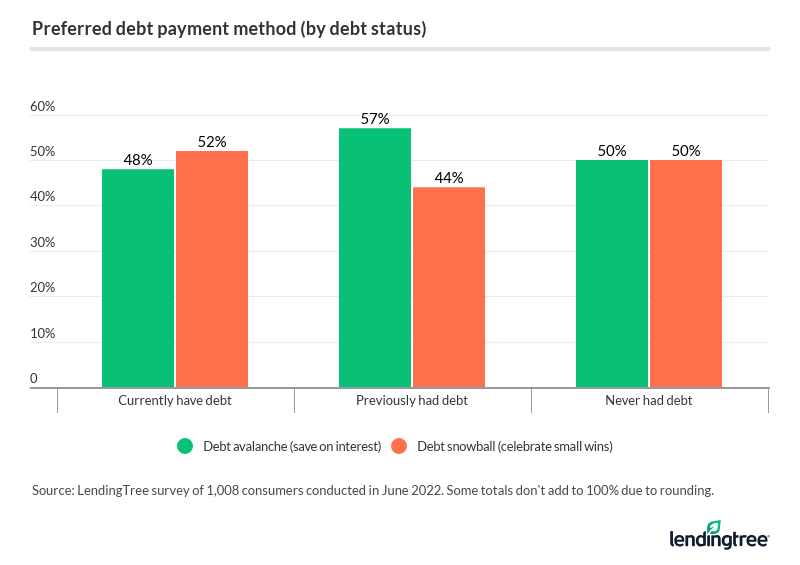 Schulz says one method isn’t better than the other. Rather, it’s just a matter of math versus psychology.

“The best debt payoff method is the one that you’re the most likely to stick with,” Schulz says. “If you’re motivated by paying your debt off as quickly as possible and paying as little interest as possible, the avalanche method is for you. If you’d be more motivated by getting wins, the snowball method is the way to go. Paying off debt is a marathon rather than a sprint, and sometimes mixing in a few small victories can be the fuel you need to keep going.”

Expert tips for dealing with debt

Breaking a debt cycle can be difficult. Depending on how much you owe, it may often feel impossible. For those struggling with debt, Schulz offers the following advice:

LendingTree commissioned Qualtrics to conduct an online survey of 1,008 U.S. consumers, fielded June 17-20, 2022. The survey was administered using a nonprobability-based sample, and quotas were used to ensure the sample base represented the overall population. All responses were reviewed by researchers for quality control.