Side Hustlers on the Rise, and Nearly 70% Say They’re More Reliant on the Extra Income Due to Inflation

Between cutting back on Thanksgiving costs and struggling with late bill payments, consumers have felt the effects of inflation. Now, after a year of steep price hikes, a higher rate of Americans are turning to side hustles to pick up the financial slack. According to the latest LendingTree survey, 44% of Americans say they have a side hustle — up 13% from 2020.

We asked nearly 2,100 U.S. consumers about their side hustle habits. Here’s what we found.

44% of Americans have a side hustle

Inflation isn’t the only thing on the rise. As consumers combat soaring costs, 44% of Americans report having a side hustle. That compares to the 39% who said they had a side hustle in 2020 — an increase of 13%. 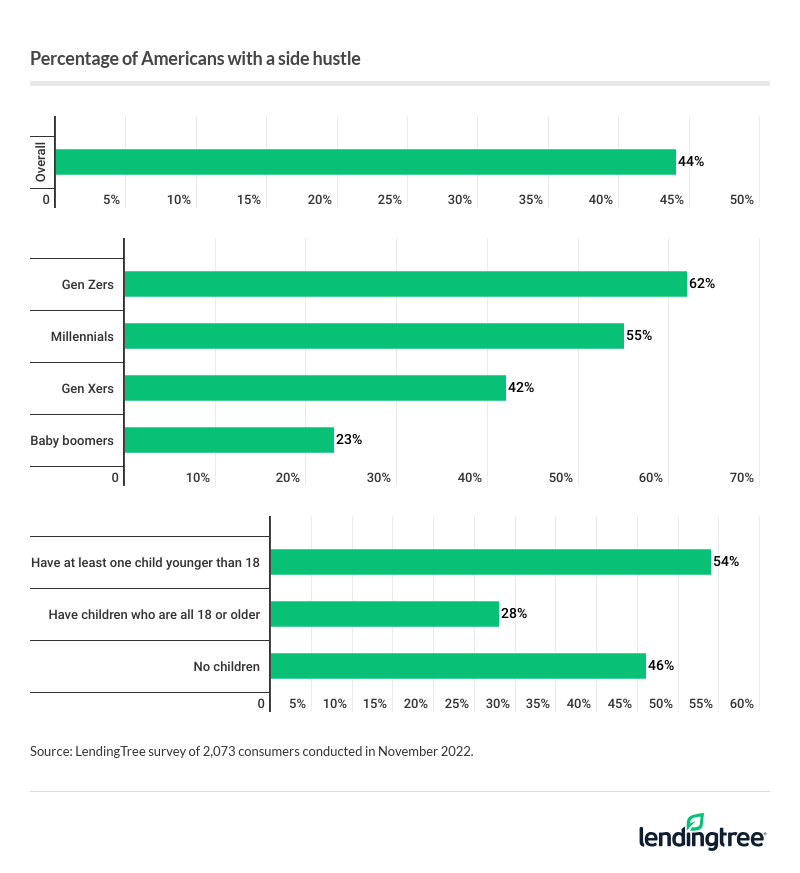 LendingTree chief credit analyst Matt Schulz says he’s not shocked that more people have side hustles now, but he finds that growth eye-opening.

“I think the onset of the pandemic emboldened a lot of people to try a side hustle, and that has just continued to grow,” he says. “And now that inflation has gone wild, more and more people have embraced side hustles out of necessity. Life is really expensive today and many people need that extra side hustle income to make ends meet or to provide themselves with a little bit of financial wiggle room.”

When it comes to what consumers are doing on the side, making and selling items on sites like Etsy (8%) is the most popular choice. Following that, 7% make extra cash by babysitting, pet sitting and caretaking, while 6% deliver food or groceries with services like Instacart, DoorDash and Uber Eats. Other common gigs include:

Meanwhile, 2% or less of side hustlers make their extra income by:

Notably, men are twice as likely as women to make extra money through illicit activities (though 2% or less of both groups said so). Men are most likely to get extra work as a handyman (8%), driving for a delivery service (8%) and reselling items online (7%).

While side hustles are arguably appealing to many Americans, the 56% of consumers who don’t have one aren’t just uninterested in earning extra cash. In fact, 30% of those who skip the side gig say they don’t have the time — the most common response. That’s particularly true for parents with underage children (42%) and millennials (40%).

Still, picking up a side hustle isn’t entirely out of the question for many of these consumers. In fact, about a quarter (25%) say they’re considering one. Gen Zers (30%), millennials (29%) and parents with underage children (29%) are among the most likely to say they’re thinking about it.

Meanwhile, those who don’t have a side gig are most likely to cite the following reasons:

Generally, baby boomers and Gen Zers feel the least inspired. Among baby boomers without a side gig, 37% say they don’t want to start one — 17 percentage points higher than average. Meanwhile, Gen Zers are the most likely to say they don’t have an idea to monetize, at 20%.

The main reason for side hustling? Most say it’s to pay for primary expenses, bills

One thing is clear: Consumers are working to close their financial gaps. Of those with a side hustle, 43% say they do it to pay for their primary expenses or bills. That figure is highest among the lowest-earning cohorts, with 54% of those earning between $35,000 and $49,999 and 53% of those earning less than $35,000 citing this reason.

This comes as 68% of hustlers say they’re more reliant on the extra income because of these price increases — even though inflation eased in the latest consumer price index. That figure is particularly high among parents with children younger than 18 (75%), those with an annual household income between $75,000 and $99,999 (73%) and millennials (73%). 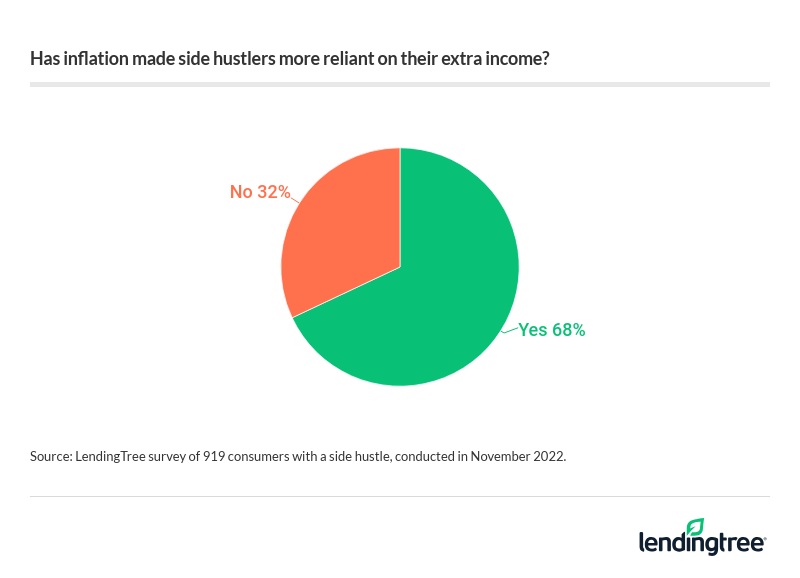 Schulz says it’s understandable so many consumers still need a side job to survive price increases.

“Inflation has eased recently, but it certainly hasn’t stopped,” he says. “Most everything has gotten more expensive, and that’s eaten away at most people’s financial margin for error. It’s particularly troubling when the cost of the most basic of expenses rises because it’s not like you can choose to cancel your utility bill or stop buying groceries the way you can a Netflix subscription.”

Those aren’t the only financially motivated reasons for picking up a side gig. Beyond filling the inflation-driven gaps, 36% of those with a side hustle say they use the additional income for discretionary spending and saving. Another 22% of side hustlers say they do it to pay off debt.

With the gift-giving season around the corner, 16% of people with a side hustle say they’re doing it to pay for holiday expenses. They’re not the only ones with cash concerns this year: In a separate LendingTree survey on gift-giving concerns, more than half (56%) of those planning to give a holiday gift said they’re worried about giving — and affordability was the No. 1 reason for stress.

Side hustlers earn an average of $473 a month

Regardless of why they’re doing it, those with side jobs are certainly making some extra cash. In fact, Americans are earning $473 a month, on average, from their side hustle — totaling almost $5,700 a year.

Though they earn less on average from their side roles, consumers with low income may be more likely to say their side hustles have a greater impact on their finances. Hustlers making less than $35,000 a year say they earn just $366 a month, on average, from their side roles — but that makes up 12% or more of their incomes. Here’s how that stacks up against other income groups:

Despite its impact on consumers’ finances, Schulz cautions against spending it all immediately.

“Just because the income doesn’t come with a W-2 doesn’t mean that you don’t have to pay taxes on it,” he says. “Make sure that you set some of that side hustle income aside for taxes, and consider enlisting an accountant and a tax professional for help. It’s serious business, so give it the attention it requires.”

Given how much hustlers make, it’s not surprising that 66% would at least consider making their side gigs their full-time job. This increases to 71% among men and parents with children younger than 18.

Those who’d consider going full time may have a long way to go, though, as 43% say their side hustle income would have to be roughly equal to their current full-time income before making the transition. Another 35% wouldn’t risk it unless their side gigs brought in more money than their full-time jobs.

Those with side gigs are pretty reliant on their extra income. If they were to lose their side gig, 71% say they aren’t certain they’d still be able to pay all their bills. Just under a quarter (24%) are at least somewhat certain they could survive without it. 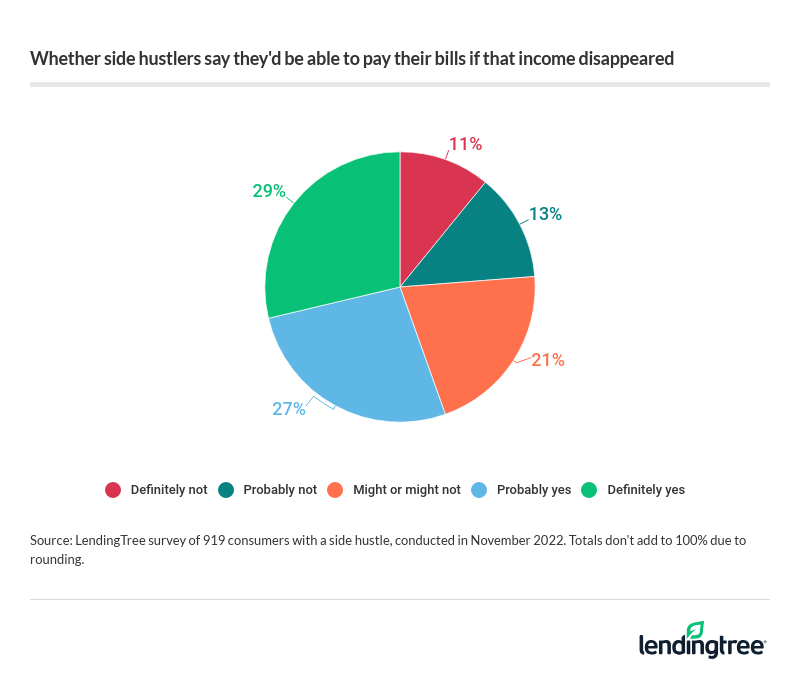 While that percentage is concerning, Schulz isn’t exactly surprised so many feel reliant on their side gigs.

“That high percentage is definitely troubling,” he says. “However, for many Americans, the truth is that they have no other choice but to have that side hustle. There’s just no way they can budget, sell unused items or slash expenses enough to get themselves out of their financial bind, so they have to come up with ways to boost their income however they can.”

Meanwhile, those making six figures are the most likely to feel completely confident in their ability to still pay their bills if their additional jobs were to disappear, at 48%. That’s followed by side hustlers with adult children (38%), baby boomers (38%) and those married or in a domestic partnership (35%).

Despite the high reliance on side hustles, consumers are less likely to say they started a side hustle because they were laid off or furloughed — indicating that the job market is recovering from the pandemic. This year, only 7% of respondents reported they had their side hustle because they lost their job or were furloughed. That compares to the 14% of hustlers who said similarly in 2020 due to the coronavirus pandemic.

Unemployment isn’t the only economic factor inspiring consumers, though. When it comes to what played a role in their decision, 43% of Americans with side hustles say inflation over the past year was a motivator to starting their side gig — the most common response. To break that down even further, 52% of people making between $50,000 to $74,999 say inflation was a driving factor. Others who cite this highly include 46% of people with adult children, 46% of baby boomers and 45% of women. 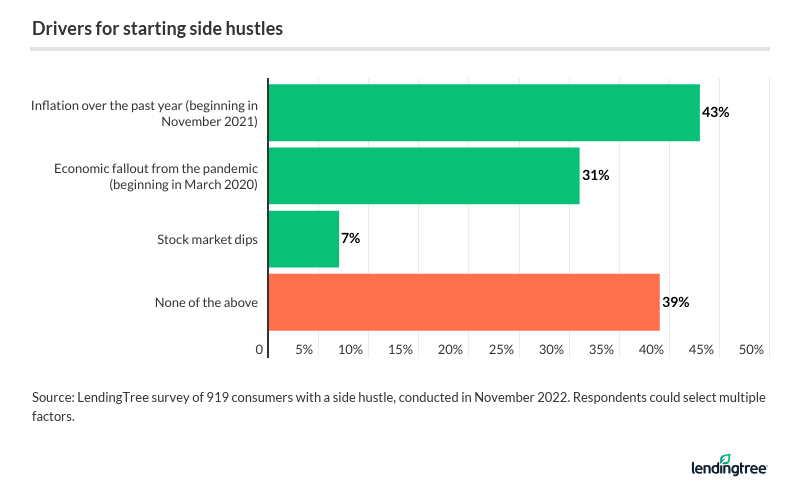 Meanwhile, 31% were motivated to start a side hustle due to the economic fallout from the pandemic, with parents of children (38%) and millennials (36%) being the most likely groups to say so.

Top tips for starting a side hustle

A little extra cash can go a long way, but it can be hard to know what’s worth your time or money. For those looking to start a side gig, Schulz offers the following advice:

LendingTree commissioned Qualtrics to conduct an online survey of 2,073 U.S. consumers ages 18 to 76 from Nov. 1 to 3, 2022. The survey was administered using a nonprobability-based sample, and quotas were used to ensure the sample base represented the overall population. All responses were reviewed by researchers for quality control.

The latest LendingTree study reveals that the percentage of people who’ve worked from home has remained relatively stable over the past year.

READ MORE
Down the Rabbit Hole: 18% of Disney Goers Have Racked Up Debt, But Most Have No Regrets

While the magic might hurt some wallets, 71% of Disney attendees who went into debt say they don’t regret it.

Personal loan inquiries grew 12.3% on our platform between the third quarters of 2021 and 2022, led by inquiries for debt consolidation.