Half of Millennials Have a Side Hustle Amid Coronavirus Pandemic

Financial hardship caused by the coronavirus pandemic has forced many consumers to look for opportunities to make extra cash wherever they can. Nearly half (45%) of Americans considered starting a side hustle at some point during the pandemic, an Oct. 2020 LendingTree survey of 2,021 Americans found.

Of the 789 Americans surveyed who currently have a side gig, we found that most (53%) depend on that income to make ends meet. Americans under 40 are the most dependent on their side gigs, too — and they work side gigs at the highest rates. See what else we found in the analysis below:

Americans search for secondary income amid the coronavirus pandemic

The coronavirus pandemic has impacted the finances of many Americans. Between February and April 2020, the unemployment rate shot up from 3.5% to 14.7%, according to the Bureau of Labor Statistics. 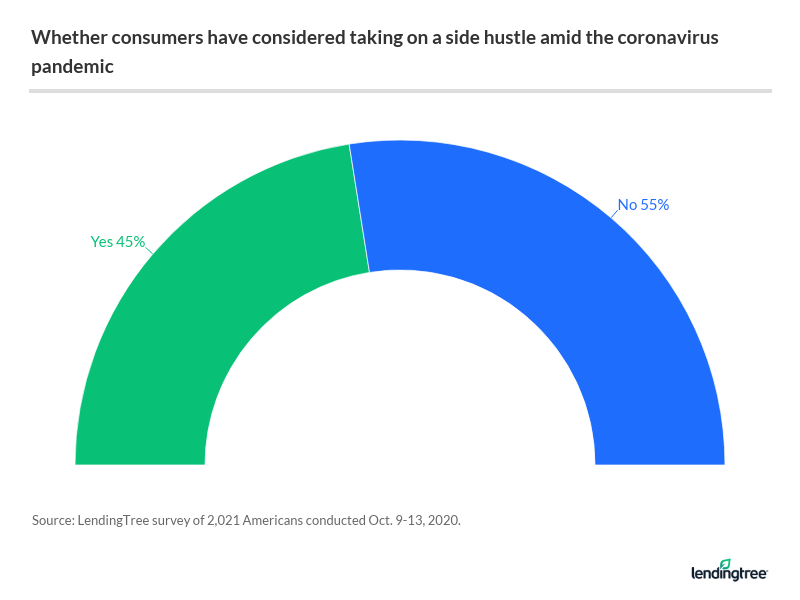 Americans under 40 were the most likely to consider side hustles during the coronavirus pandemic. Sixty-two percent of millennials thought about taking on a side gig, and 54% of Gen Zers said the same.

Matt Schulz, chief credit analyst at LendingTree, isn’t surprised that so many millennials have side hustles:

“The unfortunate truth is that coming of age in the Great Recession left scars on much of that generation that never quite healed before the pandemic delivered yet another gut punch,” Schulz said. “Those struggles have led many millennials to seek out multiple streams of income to protect themselves and make sure they’re never too dependent on the money from one source ever again.”

Many high earners have a side hustle

Surprisingly, 57% of those with an annual household income of $100,000 or more have a side hustle — more than any other income bracket. However, they may not just be in it for the money.

Americans earning $100,000-plus were more likely to report that they started a side hustle for discretionary reasons:

Lastly, high-earning Americans were three times as likely to earn $1,000 or more from their side hustle: 29%, versus 10% of Americans as a whole.

Most side hustlers depend on that income

When asked why they started their second gig, most (53%) side hustlers responded that they need the money to make ends meet. Three in 10 simply want the money for discretionary spending or saving. 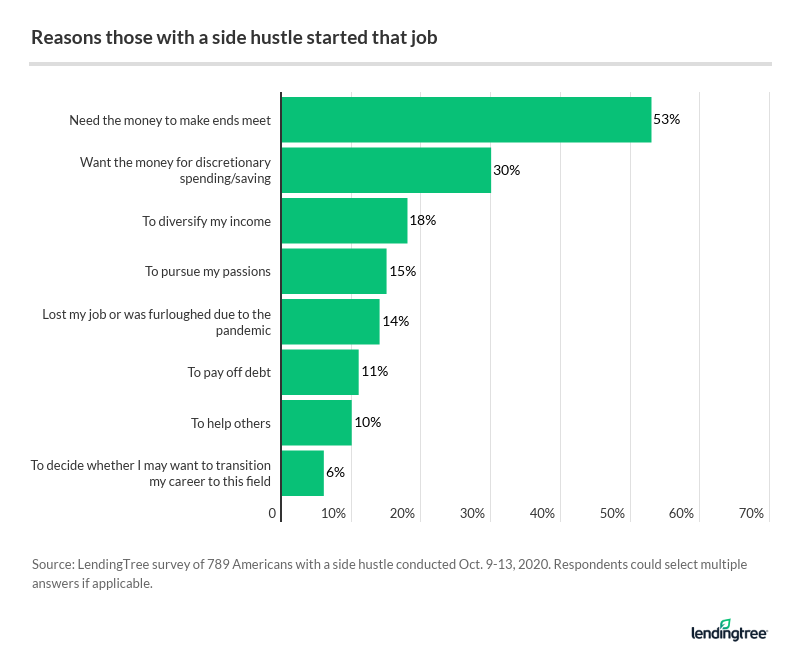 “Side hustles aren’t just hobbies or time-killers,” Schulz said. “For most folks who have one, they’re an indispensable part of their budget. They simply wouldn’t be able to make ends meet without it. It’s unfortunate that that is the case for so many Americans, but that’s the reality.”

Americans under 40 are more likely to report that their side hustle is a necessity rather than just a way to make extra money on the side. A quarter of Gen Z and millennials would not be able to pay their bills if they lost their side hustle. About a fifth of respondents of all ages said the same.

A side gig that provides even just a few hundred dollars per month could be the difference between falling behind on bills and making ends meet. In fact, most Americans with a side hustle (62%) make $349 or less each month from that gig. This shows just how close some Americans are to financial hardship. 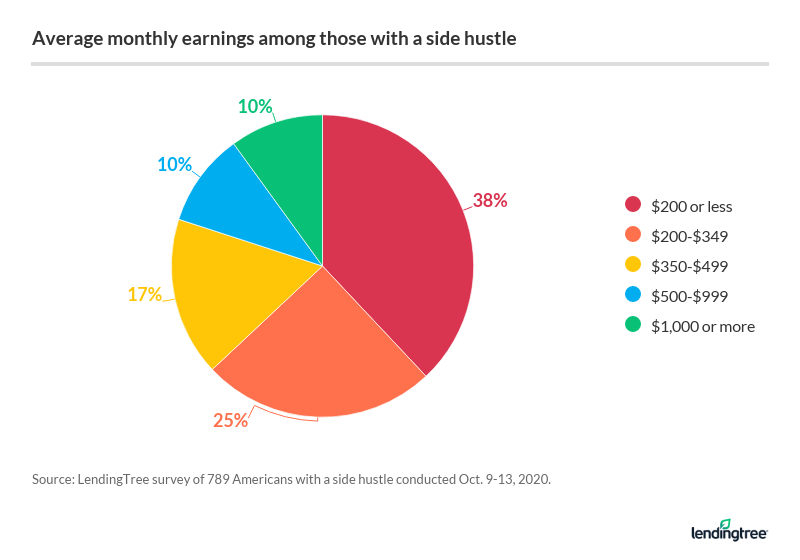 Nearly half have taken out debt to finance their side hustle

You have to spend money to make money — at least that’s how some side hustlers see it. Nearly half (45%) of people with a side hustle report having taken out debt to finance that job: 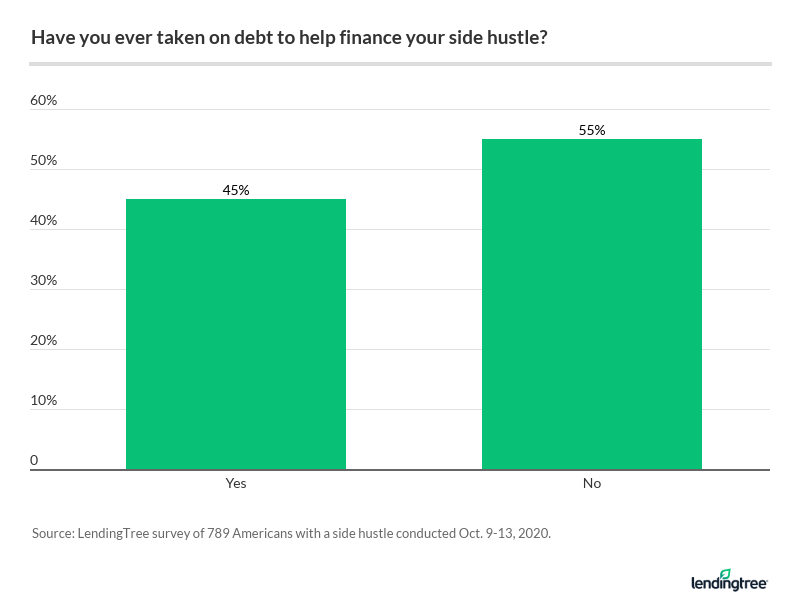 It might seem surprising that so many side hustlers need to borrow money to pay for their side gig, but many common side hustles require a monetary investment before you can start turning a profit:

Some side hustlers want to pursue passions, help others

While many side hustlers are in it for the money, that’s not always the case. Fifteen percent of side hustlers want to pursue their passions, and 10% have a side hustle because they want to help others.

The most popular side gig is caretaking, such as nannying or pet-sitting — a quarter of those with a side hustle are in the caretaking industry. Seventeen percent of side hustlers report delivering food or groceries, which can help elderly or immunocompromised Americans who don’t want to risk coronavirus exposure by going out in public. A select few (4%) tutor or teach on the side, helping students and parents who might be struggling to keep up with remote learning amid the pandemic. 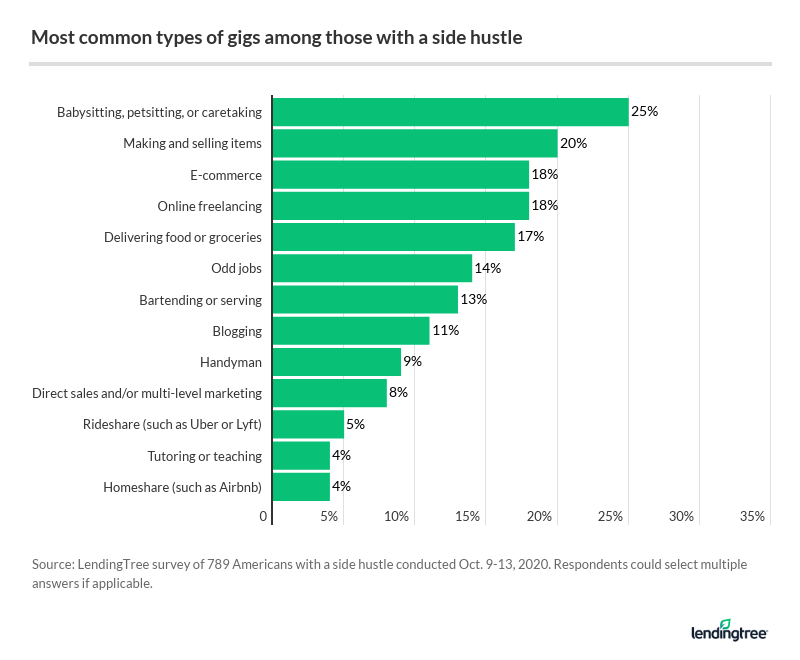 LendingTree commissioned Qualtrics to conduct an online survey of 2,021 Americans, including 789 who currently have a side hustle. The survey was fielded Oct. 9-13, 2020.

Generations are defined as the following ages:

Half of Millennials Have a Side Hustle Amid Coronavirus Pandemic

Young Americans are seeking out extra income amid the coronavirus pandemic. A quarter of side hustlers under 40 couldn’t pay their bills if they lost that job.