Amid Rising Inflation, 61% of Americans Who Paid a Bill Late in the Past 6 Months Say They Couldn’t Afford It

Many Americans are feeling financially squeezed as the cost of living rises, and having a thinner wallet can come with consequences when it’s time to pay bills. In fact, 32% of Americans have paid a bill late in the past six months — and 61% of them say it’s because they didn’t have enough money to cover the costs.

The newest LendingTree survey asks nearly 1,600 U.S. consumers about their bill-paying habits. In addition to going over why Americans are paying their bills late and which bills they’re missing, we’ll discuss the rate of consumers who say they’re less able to afford their bills amid rising inflation.

Americans late on bills say they didn’t have enough money

Most Americans are no stranger to late payments, as 64% have paid a bill late before. For half of those Americans (32%), these late payments happened in the past six months.

Rising inflation may be to blame, as 61% of consumers who’ve recently paid a bill late say it’s because they didn’t have enough money to cover the costs. That makes it the most common reason for late payments. By gender, women (64%) are more likely to say they’re short on cash for bills than men (57%). 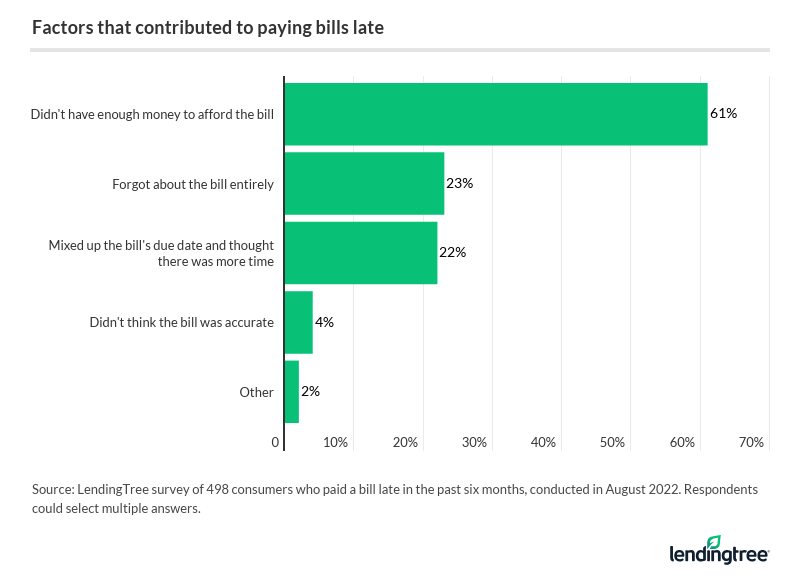 LendingTree chief credit analyst Matt Schulz says not everyone has been able to make ends meet, even as many Americans are likely trimming their budgets to pay their bills.

“Life is getting more expensive by the day and it’s shrinking Americans’ already tiny financial margin for error down to zero,” Schulz says. “Unless they’ve been able to increase their income, millions of Americans have had to make sacrifices because of inflation to pay the bills. Perhaps the worst part is that inflation likely isn’t going anywhere anytime soon. That means that short-term quick fixes won’t cut it.”

In addition, 23% of those who’ve paid late in the past six months say they forgot their bill entirely, while 22% say they mixed up due dates.

Utility, credit card bills most likely to be paid late

Conserving energy isn’t only good for the environment. It’s also good for your pockets, particularly if you’re struggling to pay your bills on time. Nearly half (46%) of those who’ve missed a payment in the past six months say it was a utility bill — the most of any category.

Following that, credit cards (39%) and cable or internet bills (34%) are the most common ones that consumers have missed. 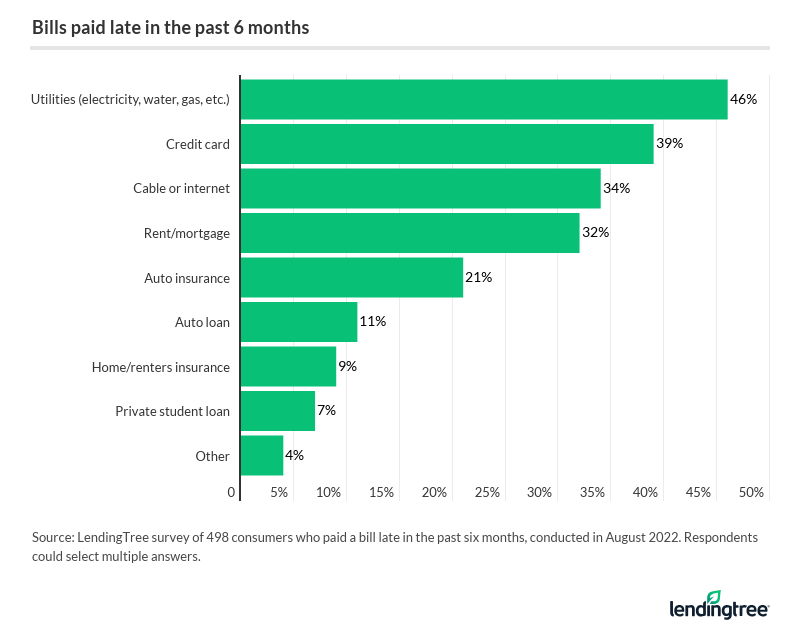 By gender, however, the type of missed bill varies. Women are most likely to cite utility bills as the main culprit (51%), while men are more likely to say it’s credit card debt (42%). 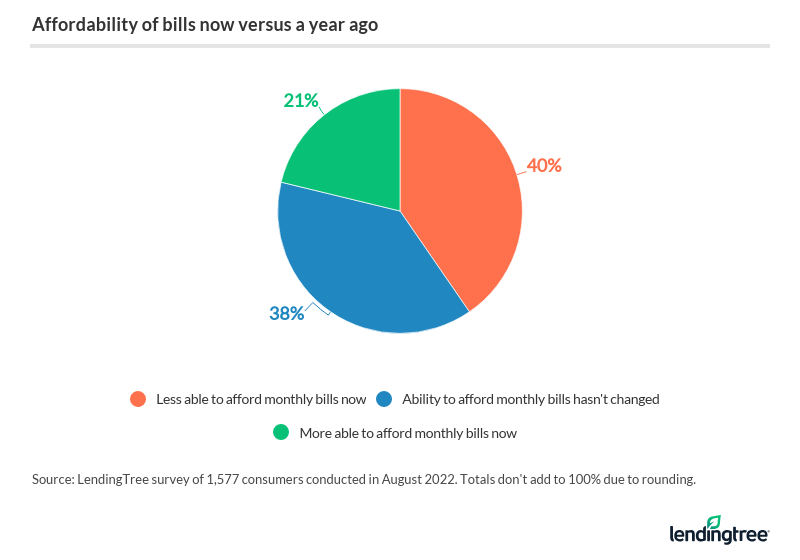 High earners are generally less likely to feel the impact of rising costs on their ability to pay their bills. In fact, 50% of six-figure earners say their ability to afford their monthly bills hasn’t changed in the past year. On the other hand, more than half (54%) of those with a household income of less than $35,000 are less able to afford their monthly bills now than a year ago — the only demographic over 50%. That’s followed by 42% of those with a household income between $35,000 and $49,999.

“Even in the best of economic times, being a low-income consumer likely means having significantly less financial wiggle room,” Schulz says. “However, when inflation is high, things are far worse. These folks are forced to rely on credit cards to make ends meet, leaving no room to build an emergency fund that could have helped them feel a little more stable financially.”

Additionally, women (46%) are more likely than men (33%) to say they’re less able to afford their monthly bills now than a year ago.

Americans struggle to afford housing costs the most 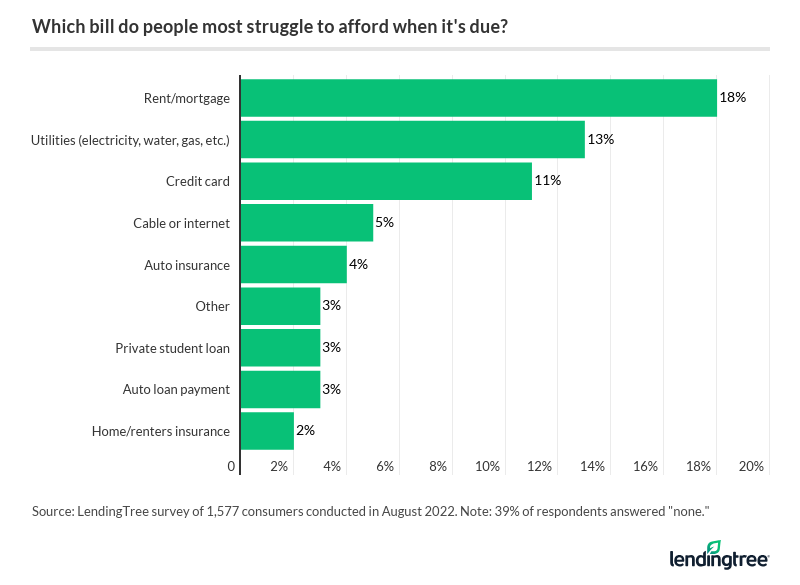 More than half of Americans have overdrafted accounts to pay bills 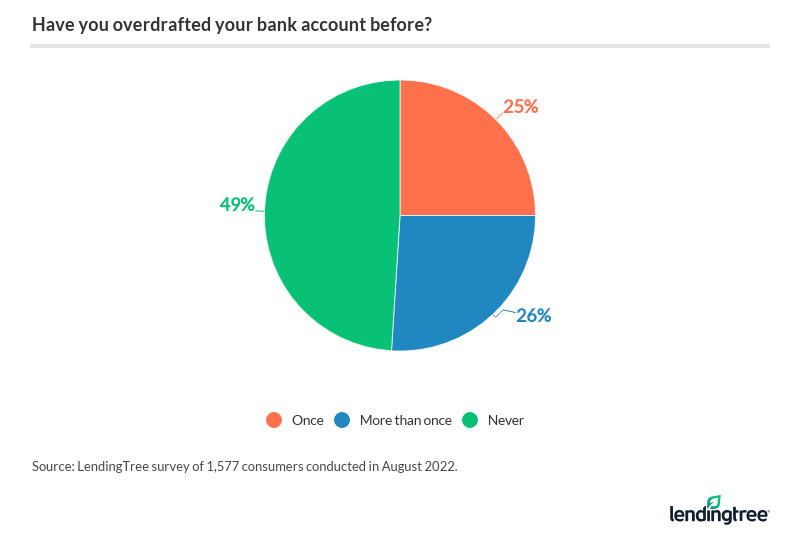 Millennials (58%), Gen Xers (56%), Gen Zers (55%) and those with household incomes below $35,000 (54%) are the most likely to have overdrafted their bank accounts to pay a bill at least once. Meanwhile, baby boomers (67%) and six-figure earners (53%) are the most likely to have never overdrafted their bank accounts while paying the bills.

When it comes to the consequences of overdrafting an account, most of those who’ve recently dealt with a late bill know what extra fees they’d be paying. Of those who paid a late bill in the past six months, 72% say their primary bank charges overdraft fees. However, another 8% don’t know.

While Schulz believes auto-drafting can be helpful, he warns that it isn’t a perfect system.

“Auto-drafting can be a great tool to help ensure that you avoid paying late or damaging your credit,” he says. “However, it requires oversight. If you’re paying from a checking account, you have to make sure that there will be enough money in your account to pay the bill. Also, it’s a good idea to check in regularly to make sure that all of your bills have been auto-paid correctly. Failing to do so can end up leading to big problems when a bill becomes 30 or more days late.”

Of those who pay at least one bill manually, 40% say they do so to have control over the payment date, making it the top reason for making a manual payment. That’s followed by being able to review charges first (37%) and making sure the payment went through (35%).

Expert tips for paying your bills on time

While late bill payments happen occasionally, the consequences can add up. If you find yourself digging a deeper debt hole, Schulz offers the following advice to catch up on payments again:

LendingTree commissioned Qualtrics to conduct an online survey of 1,577 U.S. consumers ages 18 to 76 from Aug. 19 to 26, 2022. The survey was administered using a nonprobability-based sample, and quotas were used to ensure the sample base represented the overall population. All responses were reviewed by researchers for quality control.

23% of Americans Have Medical Debt (and Other Stats)

Here’s our roundup of medical debt statistics so you can better understand its impact and implications.