This year has been an exceptional one in the housing and mortgage markets. Despite the detrimental economic effects of the COVID-19 pandemic, mortgage originations are on track to have their best year ever and home sales will come close to their 2019 levels. This is despite more than 40 million Americans losing their jobs at some point in 2020, and 20 million people still on unemployment benefits as of November.

The housing market’s close relationship with the labor market appears to have broken in 2020. So what happened?

Much of the momentum in home sales and refinancing has been attributed to low mortgage rates, which have fallen to historical lows. As of Dec. 3, the national average 30-year fixed rate was 2.71%, according to Freddie Mac. Mortgage rates are being driven lower by the Federal Reserve’s monetary stimulus through its aggressive bond-buying program. However, another type of government intervention has not gotten as much attention: fiscal stimulus.

The extra cash injected into the economy from stimulus and relief funds likely shows up in the housing market as outright cash purchases, increased activity from wealthier households who can now afford a down payment and/or larger down payments and, as a result, lower loan-to-value ratios.

LendingTree data allows us to explore the last factor.

When a homebuyer uses a conventional mortgage, they must pay private mortgage insurance if they put less than 20% down. Mortgage insurance increases the overall cost of a loan, and protects the lender — not the borrower — from financial loss if the borrower defaults, or fails to repay the loan. This gives borrowers a good reason to put more than 20% down on a home purchase if they have the cash.

Since the COVID-19 stimulus started to flow through the economy, there has been a notable increase in the share of borrowers putting more than 20% down.

These findings are consistent across the nation’s 50 largest cities, with these notable changes in the share of borrowers making a down payment of 20% or more:

How does fiscal stimulus flow into the housing market?

Since March, the federal government has injected $3.5 trillion into the economy, consisting of $2.6 trillion in spending and $900 billion in tax relief. Many of the programs are well known, including supplementary unemployment insurance and the Payment Protection Plan (PPP) loans for small businesses.

While none of these programs were directed at the housing or mortgage markets, we believe some of this money found its way to home purchases and has contributed to the strength in the housing market in the second half of the year.

You may be wondering: How can we connect these dots?

The idea behind these fiscal measures was to enable households to meet their living expenses when they faced income disruptions. In the most basic formulation, 100% of the stimulus funds would have shown up as spending. However, that didn’t happen; between 25% to 60% of stimulus payments were used to pay down debt or add to household savings. This ends up affecting the housing market.

Debt payments and reduced spending have led to a decline of more than $130 billion in credit card debt since the start of the year. Combined with payment breaks on other types of debt, like student and auto loans, this led average credit scores to reach a record high this summer. Higher credit scores make it easier to qualify for a mortgage and get better rates.

Savings also saw a huge increase in 2020. Through September, consumers have stashed away $1.35 trillion more than they would have saved in a normal year. By year’s end, with economic activity set to be constrained yet again by the coronavirus pandemic, excess savings could top $1.6 trillion.

It’s crucial to note that there are huge disparities, with lower-income households struggling to meet basic daily expenses. Meanwhile, wealthier households cut their spending and, in some cases, received windfalls from the various government stimulus packages.

The Fed has committed to keep interest rates low for the foreseeable future. Combined with the elevated level of savings that households have — especially higher-income earners who are more likely to purchase homes — 2021 should see continued strength in the housing market.

The Mortgage Bankers Association (MBA) expects existing-home sales to increase to 6.2 million in 2021, up from 5.6 million in 2020. Even as the U.S. economy and labor market remain weaker than pre-pandemic levels, housing is expected to be a bright spot. 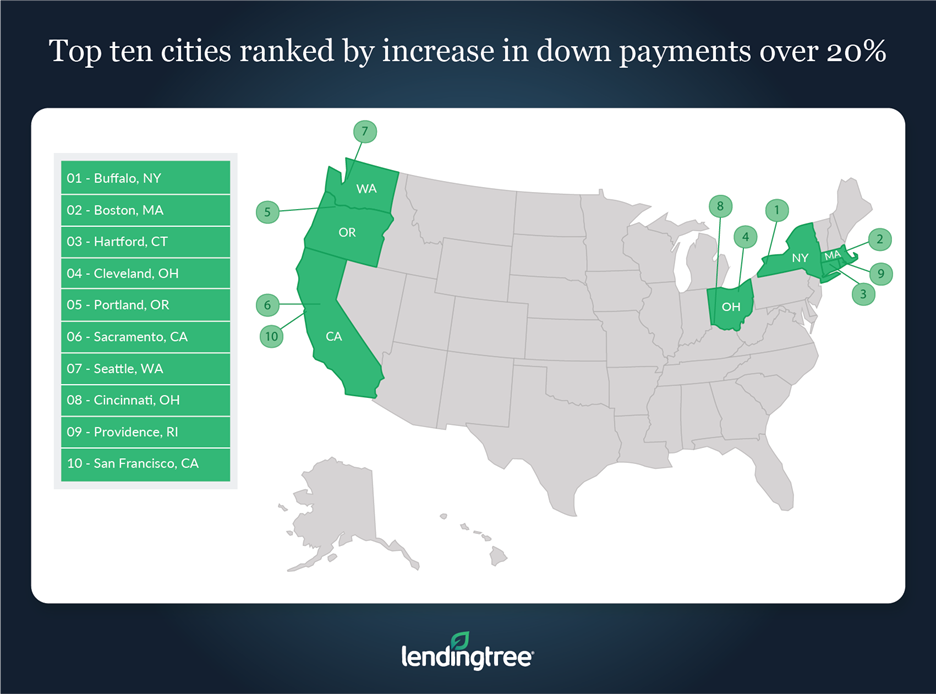 To determine the distribution of down payments, LendingTree looked at mortgage applications on its platform from January 2019 through October 2020. The city rankings are generated from the percentage of total purchase mortgage requests with a down payment of 20% or more of the home purchase price.

Since COVID-19 stimulus money was distributed, there has been a notable increase in the share of borrowers putting more than 20% down on a home. Find out why.