Would you buy a home on Elm Street? Or pay extra for a home that had your lucky number attached to the mailbox out front? Turns out, some homeowners have said yes to these questions.

A new LendingTree survey finds that many Americans may let luck or superstition influence their homebuying behaviors. In fact, nearly 4 in 10 said “I’ll pass” on a home, and had a superstitious explanation for their decision.

When asked if they’ve ever decided not to buy a particular home because of something luck-related or superstitious, 38% of homebuyers said they’ve done so at least once. Meanwhile, 62% said they’ve never skipped out on a home purchase based on bad luck or superstition. 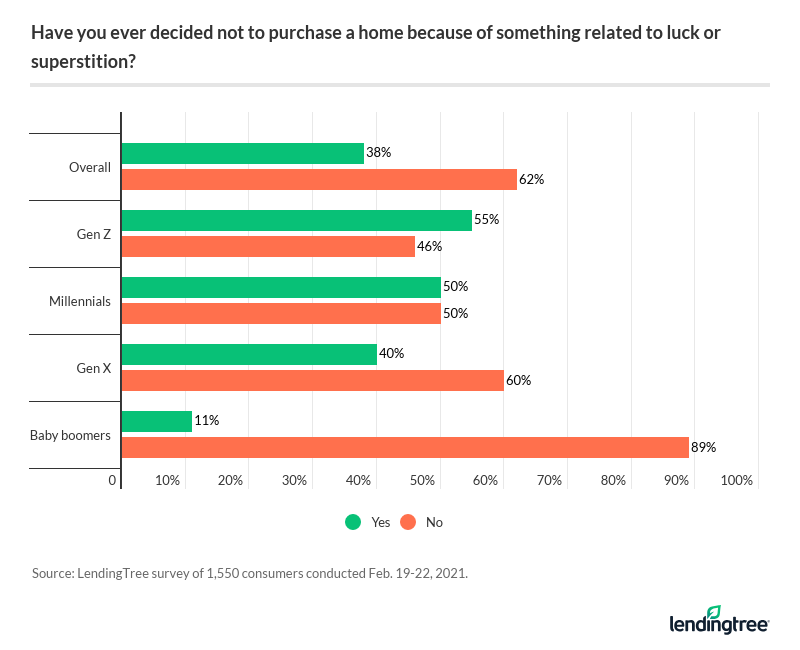 Broken down by generation, younger adults are more likely to decide against buying a home because of luck or superstition. More than half (55%) of Generation Z and 50% of millennials have avoided a particular property.

Nearly 9 in 10 (89%) survey respondents who consider themselves “very superstitious” have opted out of a home purchase because of a superstition or an unlucky feeling.

Of those who skipped buying a home because of a superstition, the top three most-cited reasons were: 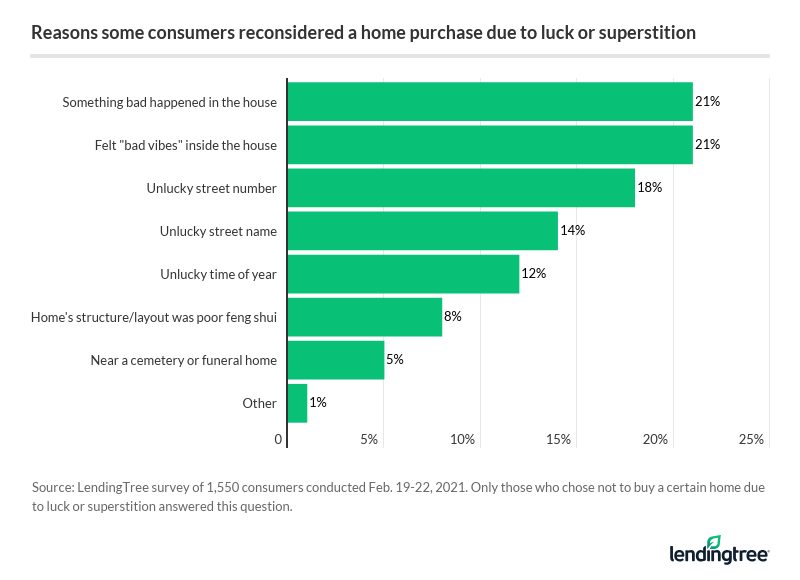 More than 4 in 10 (43%) homebuyers have at least one deal breaker related to a home’s feng shui. Common reasons for not buying a home include: 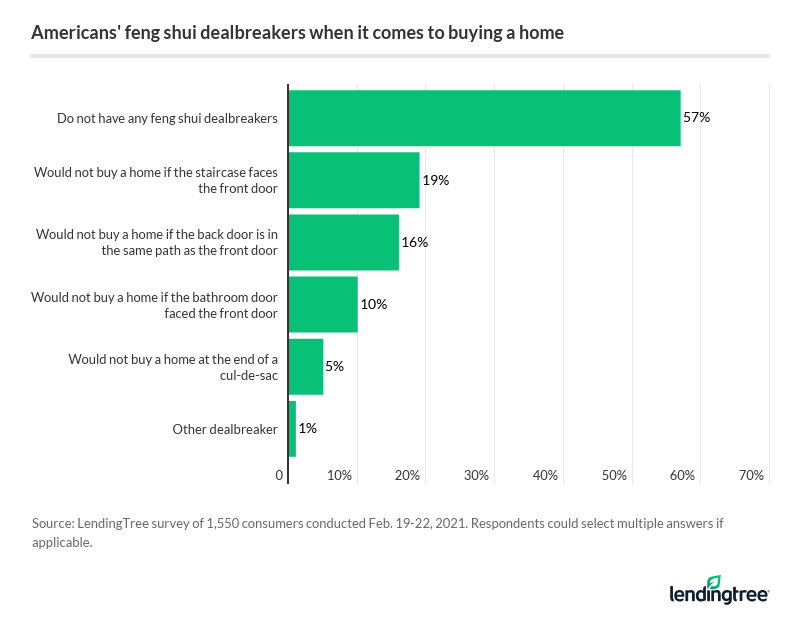 More than 4 in 10 (43%) survey respondents who reported being previous home sellers said they have had difficulties selling their home, thanks to superstitious buyers.

To illustrate how superstitions can impact homebuying habits, we asked a series of hypotheticals. For example, when asked whether they would ever live on Elm Street, more than two-thirds (71%) said yes, but 1 in 5 (20%) would expect a price reduction when purchasing a home that may or may not get the occasional visit from Freddy Krueger.

Nearly 7 in 10 (69%) survey respondents would buy a house with an unlucky street number — such as 13 or 666 — but 20% of those buyers would prefer to pay less because of this numeric superstition.

A large chunk of survey respondents — 47% — are willing to disregard their homebuying budget for a house that feels lucky. By how much, you ask? About $38,000, on average. 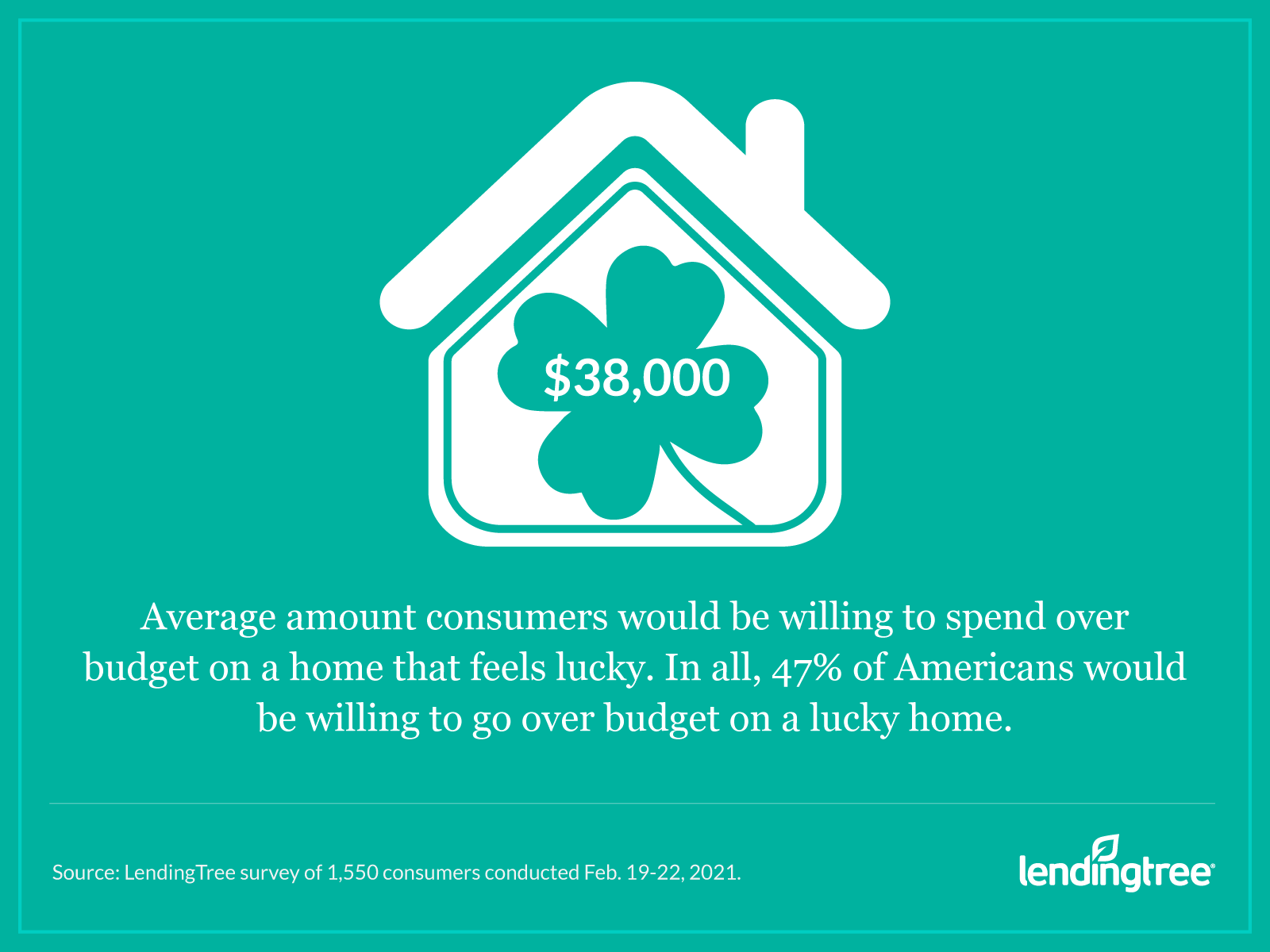 More than a third (35%) of buyers would pay extra for a home whose street number was their lucky number.

When asked if they have specific rituals they follow when moving into a new home to cleanse it of bad energy and prepare the property for their family, half of buyers agreed — 24% said this describes them completely and 26% said this somewhat describes them.

For this survey, LendingTree commissioned Qualtrics, an experience management firm, to field an online survey of 1,550 Americans. The survey was conducted Feb. 19-22, 2021, using a non-probability-based sample and quotas to ensure the sample base was proportioned to represent the overall population. Researchers reviewed all responses for quality control.

The survey also included consumers from the silent generation (ages 76 and older). Due to the small sample size, however, findings related to that group were excluded in the generational breakdowns.