3-Year Changes to Each Generation’s Debt

As each generation moves into different stages of their personal and economic lives, the amounts and types of debt they carry shifts, too. We compared the debts of members of the four adult generations — millennials, Gen Xers, baby boomers and silents — between March 2016 and March 2019 to see what’s changed.

Specifically, we calculated the changes in the average balance of each major debt category — personal loans, credit cards, auto loans, student loans and mortgages — and the change in the percentage of each generation that carries each type of debt.

In comparison to members of the silent and millennial generations, baby boomers and Gen Xers are carrying the highest amounts of debt. However, in both 2016 and 2019, each of the four adult generations’ combined debts were at least $50,000.

But while baby boomers and silents have managed to pay down their debts by at least $9,000, both Gen Xers and millennials experienced an increase in recent years. This increase in debt for millennials has occurred as they age, perhaps beginning to have families and wage increases that improve their monthly cash flow. A higher income may have allowed them to cover the cost of nicer cars and other expenses that will ultimately increase the amount of debt owed. 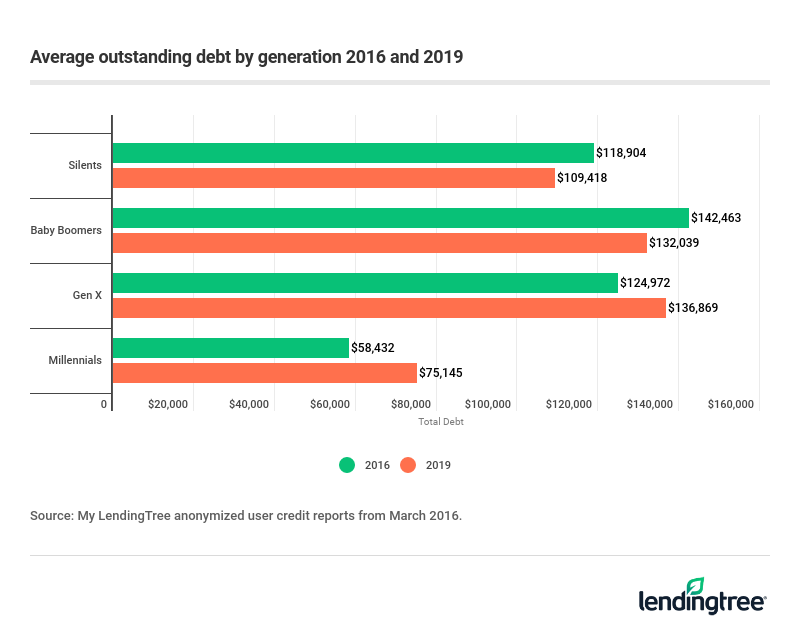 Members of Gen X carry the largest amount of debt of any generation. From 2016 to 2019, this generation’s overall debt increase by almost $12,000. Their debt has increased across all categories, though they experienced increases in the proportion of their debt in personal loans, auto loans and student loans. Millennials, meanwhile, have increased their overall average debt by almost $17,000 in that same timeframe; the proportions of their debt increased in personal loans, credit cards and mortgages. 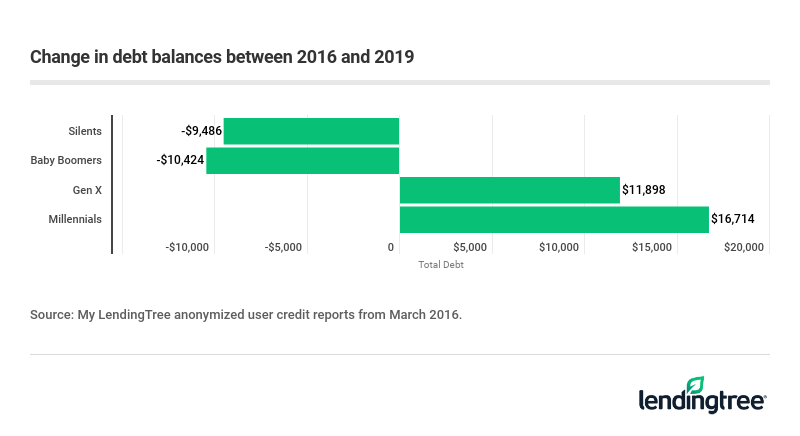 Over the three-year span we studied, notable changes occurred with the distribution of debt belonging to each generation.

In previous years, baby boomers and silents held the highest proportion of their debt in mortgages. While that remains true in 2019, both generations have experienced a decrease in both proportion and amount of debt in this category. This decrease is likely due to several years of timely mortgage payments. 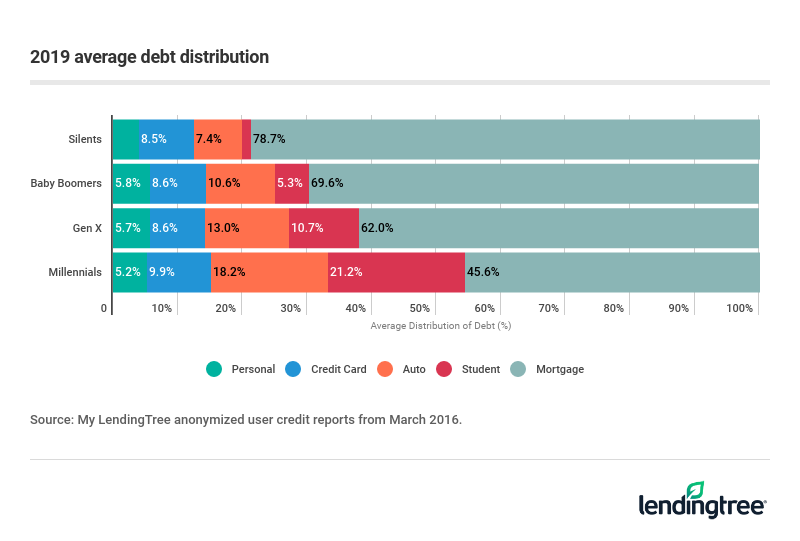 Between education expenses, the cost of buying a car and more, many people have watched their debt grow out of control without a solid plan to conquer it. Unfortunately, this debt can be an obstacle that prevents people from reaching milestones that require financial stability, such as buying a home, having a child or retiring.

By making a plan for your money with life’s financial milestones in mind, you can learn to manage your money, pay down your debt and finally afford what currently may seem impossible.

When planning for those financial milestones, consider the following:

Depending on your circumstances, debt consolidation is an option you can take advantage of to help you get out of debt. By combining various debts and rolling them into one new loan, it can become easier to manage your monthly payments while avoiding late fees and missed payment penalties. This route can be effective at reducing debt because it allows people to take out a loan at a potentially lower rate to cover the cost of current debts.

If debt consolidation is not an option to help you manage your current debt, you can consider other alternatives, including refinancing, forbearance or even negotiating with lenders and creditors to settle the debt.

LendingTree is a free credit monitoring service available to the general public, regardless of their debt and credit histories, or whether they’ve pursued loans on a LendingTree platform. LendingTree has over 9 million accountholders.

3-Year Changes to Each Generation’s Debt

This study compares the debts of members of the four adult generations — millennials, Gen Xers, baby boomers and silents — between 2016 and 2019.