The Most and Least Debt-Ridden Places in California

California is the most populous and one of the most prosperous states in America. It may not be surprising that there are big differences in how Californians manage their finances in different cities, given its size and relative wealth. But the size of the fiscal gap among California cities may astonish some.

To create this study, we looked at anonymized credit report data from November 2018 to January 2019, of LendingTree users who live in 165 California cities to find the places with the highest median non-mortgage debt.

An overhead view of debt in California

Living in California is expensive. California is the second most expensive state, behind only Hawaii, according to data from the U.S. Census Bureau on median monthly housing costs.

Despite being home to some of the most in-demand cities in the world, California is not a very densely populated state, forcing people into living farther away from where they work. The average California commuter spends about 30 minutes to get to work every day, ranked No. 5, after Washington, D.C., for commuting time.

Credit card debt is the largest source of debt in just eight cities.

The majority of the top debt-ridden cities are in Southern California. Among the 25 cities where residents carried the highest non-mortgage debt, 60% of them are SoCal cities.

Temecula is the most debt-ridden city located in Southern California. Its residents carried an average debt of $30,163, with just over 41% of their debt coming from auto loans.

Auto loans unanimously made up the largest source of the non-mortgage debt of residents in southern California. In Hanford, nearly half of the average non-mortgage for an average resident comes from auto debt, the highest percentage among all cities.

Percentage-wise, people in La Mesa shouldered a relatively higher portion of student loan debt than other most debt-saddled cities, at 28%, totaling $10,504.

Petaluma residents had the highest portion of credit card debt, at 31%, equalling $9,607. 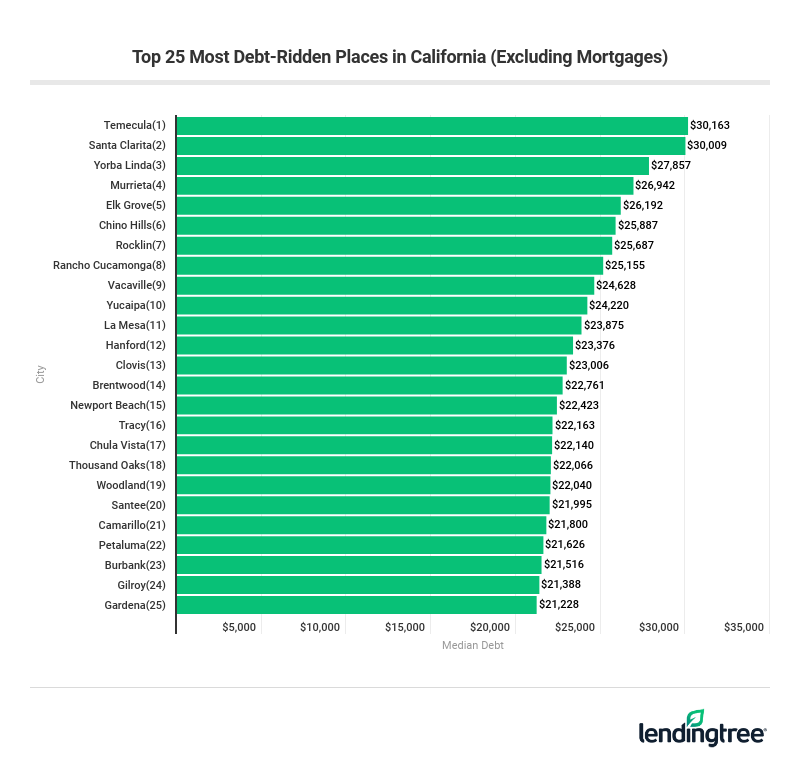 Residents in California’s most populated cities tend to carry less debt, despite often being some of the most expensive places to live.

The city with the least debt is Santa Cruz, where the median non-mortgage debt among residents on average was $8,563.

Besides San Jose residents, those living in other Silicon Valley cities, such as Palo Alto, Cupertino and Sunnyvale, were also among the least indebted in California. 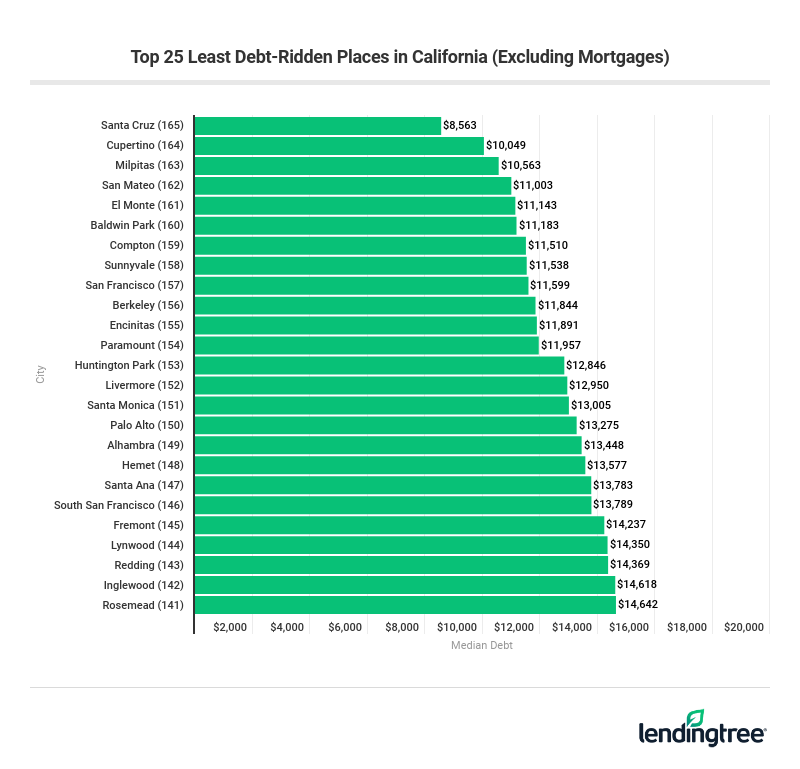 Here are eight actionable tips for you to pay off your debt faster or save money in interest payments.

Control your spending and free up cash for extra debt payments by:

Using an anonymized sample of over 500,000 users, researchers calculated total debt balances from November 2018, December 2018 and January 2019 credit reports. These results were then aggregated to the California cities with a population of at least 50,000 to calculate median non-mortgage debt obligation. Included in this analysis researchers also found the average distribution of debts across the following debt types: auto, credit cards, personal loans, and student.

LendingTree is a free credit monitoring service available to the general public, regardless of their debt and credit histories, or whether they’ve pursued loans on a LendingTree platform. LendingTree’s platform has over nine million users.

What Credit Score Is Needed to Get a Personal Loan?

What credit score do you need to apply for a loan? Each lender sets its own credit requirements for borrowers.

READ MORE
17 Types of Loans, From Personal Loans to Mortgages and More

Whether you are going to college, getting married, or buying a car or house, different types of loans suit different borrowers.

Learning the ins and outs of how to apply for a personal loan can help you qualify — and ensure you get the best possible APR and terms for you.