Where Borrowers Are Taking Out the Longest Auto Loans

As the prices of new and used cars skyrocket, so, too, are average auto loan lengths. Since long-term auto loans can mean lower monthly costs, car buyers may favor or need the extra time to afford vehicle purchases.

But longer payment terms can cost buyers more money because of the accrued interest. Researchers look at loans closed on the LendingTree platform over the last three years to see where people take out longer car loans — and how average term lengths have changed.

Though auto loans for new cars tend to have longer terms, this data looks mostly at used cars based on the typical closed loan through the LendingTree platform.

Florida auto borrowers in for the long haul

In the past three years, consumers closing out auto loans on the LendingTree platform financed their vehicles for an average of 62.9 months — or just more than five years. But in some metros, buyers are tacking on as many as 3.5 months onto that average.

The metros that take out the shortest average auto loans vary more regionally than those with longer loans, but some commonalities occur.

Higher incomes could play a factor in these shorter auto loan terms, as several of the shortest-borrowing metros like San Francisco, San Jose and Seattle have some of the highest median incomes in the country.

LendingTree senior autos writer Jenn Jones explains that those with more cash for a bigger down payment or monthly payment can wind up saving on interest down the road. If they can afford higher monthly payments, they’re likely to take the better option of a shorter loan term.

Where longer loans are more common

While the average auto loan across metros analyzed sits at just more than five years, some metros have notable shares of auto borrowers who finance their vehicles for longer than six years.

Across the 48 metros, an average of 7.6% of borrowers took out auto loans with terms longer than six years, but that share nearly doubled in Hartford, Conn. (14.7%).

Auto borrowers in Charleston, S.C., take out extra-long auto loans at the next highest rate (13.3%), followed by Phoenix at 12.0%.

The coronavirus pandemic has sent shockwaves throughout the autos industry, quickly driving up prices for new and used cars. Consumers may be responding by taking out longer auto loans along with looking for older cars and bigger loans, as LendingTree reported earlier this year.

Throughout 2019, consumers financed vehicles for an average of 62.8 months, then got slightly shorter loans — 61.1 months, on average — throughout 2020. But through the first 10 months of 2021, auto loan terms have averaged 64.6 months, peaking in July, when terms averaged 65.6 months. November 2020 was the only month in three years to see average auto loan terms drop below 60 months, but just down to 59.9. 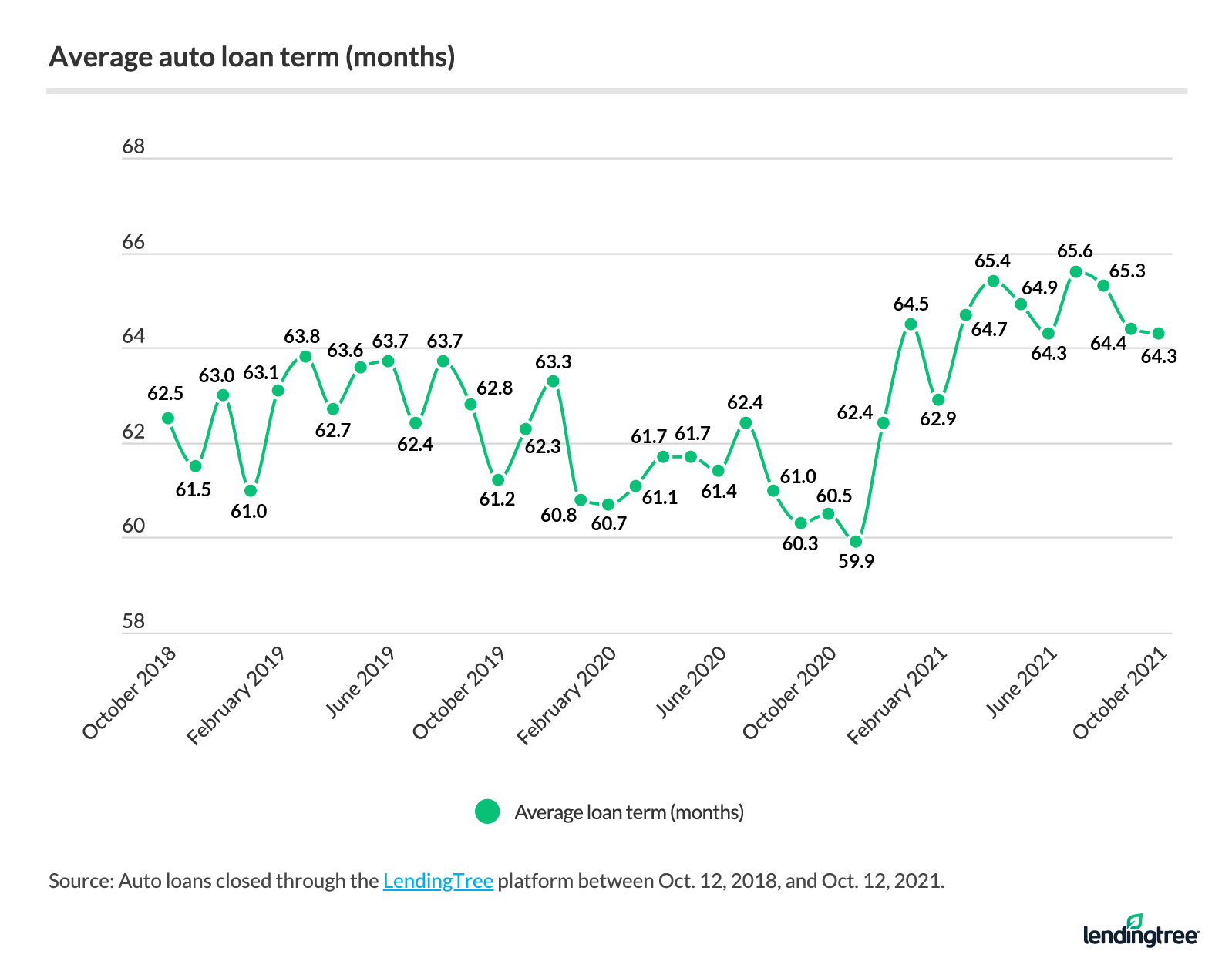 The most popular loan term for borrowers through the LendingTree platform since 2018 is 72 months, or six years, with 36.5% of borrowers financing for this term. But the share of 60-month auto loans is only slightly smaller at 34.8%. Only 7.8% of loan terms are 73 months or longer, while a notable 19.2% of auto loan terms are shorter than 60 months. 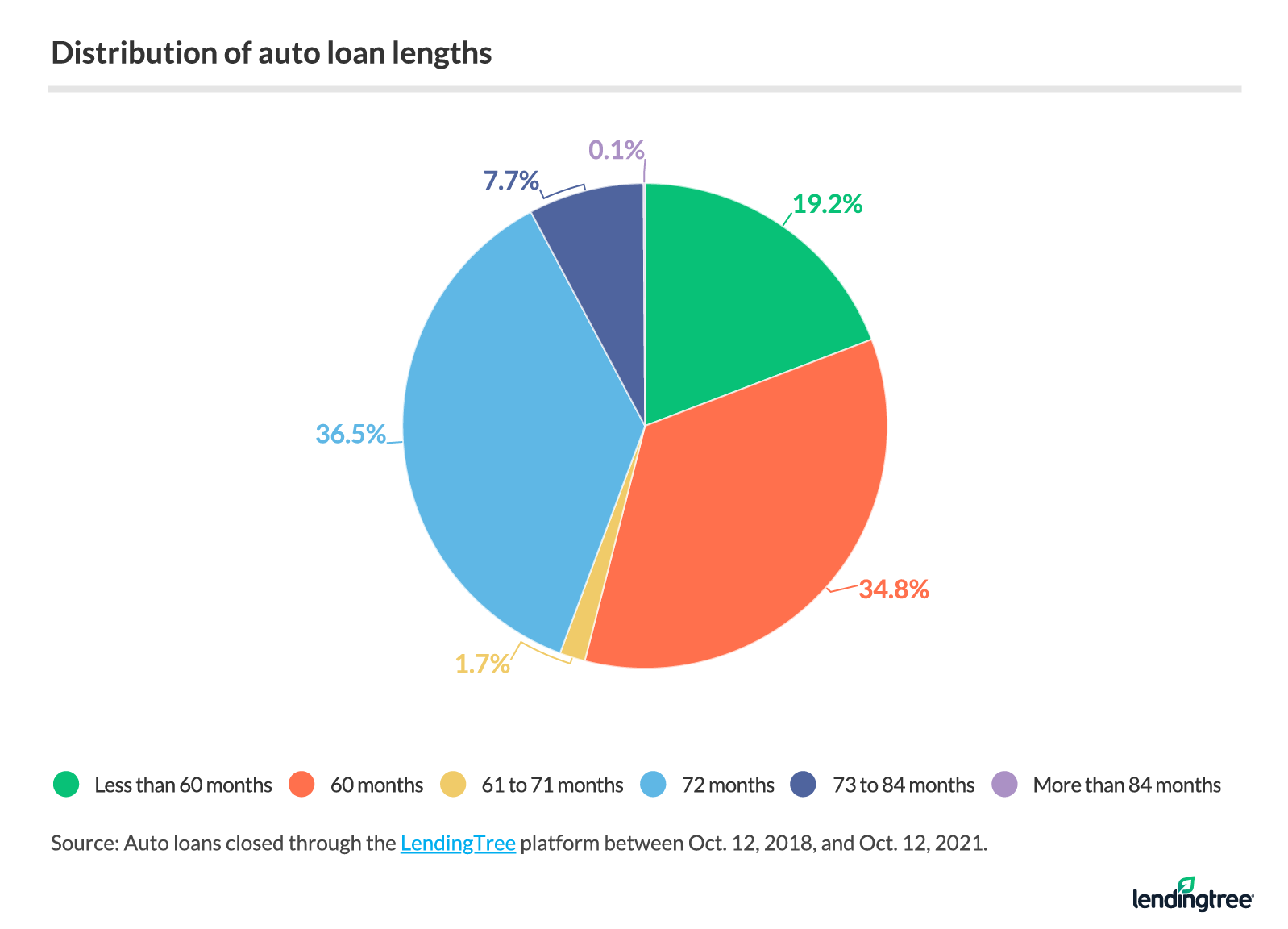 Speed out of auto debt

If you can’t get a shorter auto loan term when buying a car, use these tips to accelerate your debt payoff.

Analysts reviewed a sample of more than 29,000 auto loans that closed between Oct. 12, 2018, and Oct. 12, 2021, from consumers who were matched to their lender on the LendingTree platform.

Analysts also calculated loan lengths by purchased auto make and nationally. Auto loans were limited to cars and light truck purchases. Researchers didn’t include analysis of metros or makes where samples were too low.