Following the recession, and the subsequent dip for the average score, there has been a steady trend toward a higher average credit score. But it’s important to note that rising scores may be due, at least in part, to changes in the FICO model. 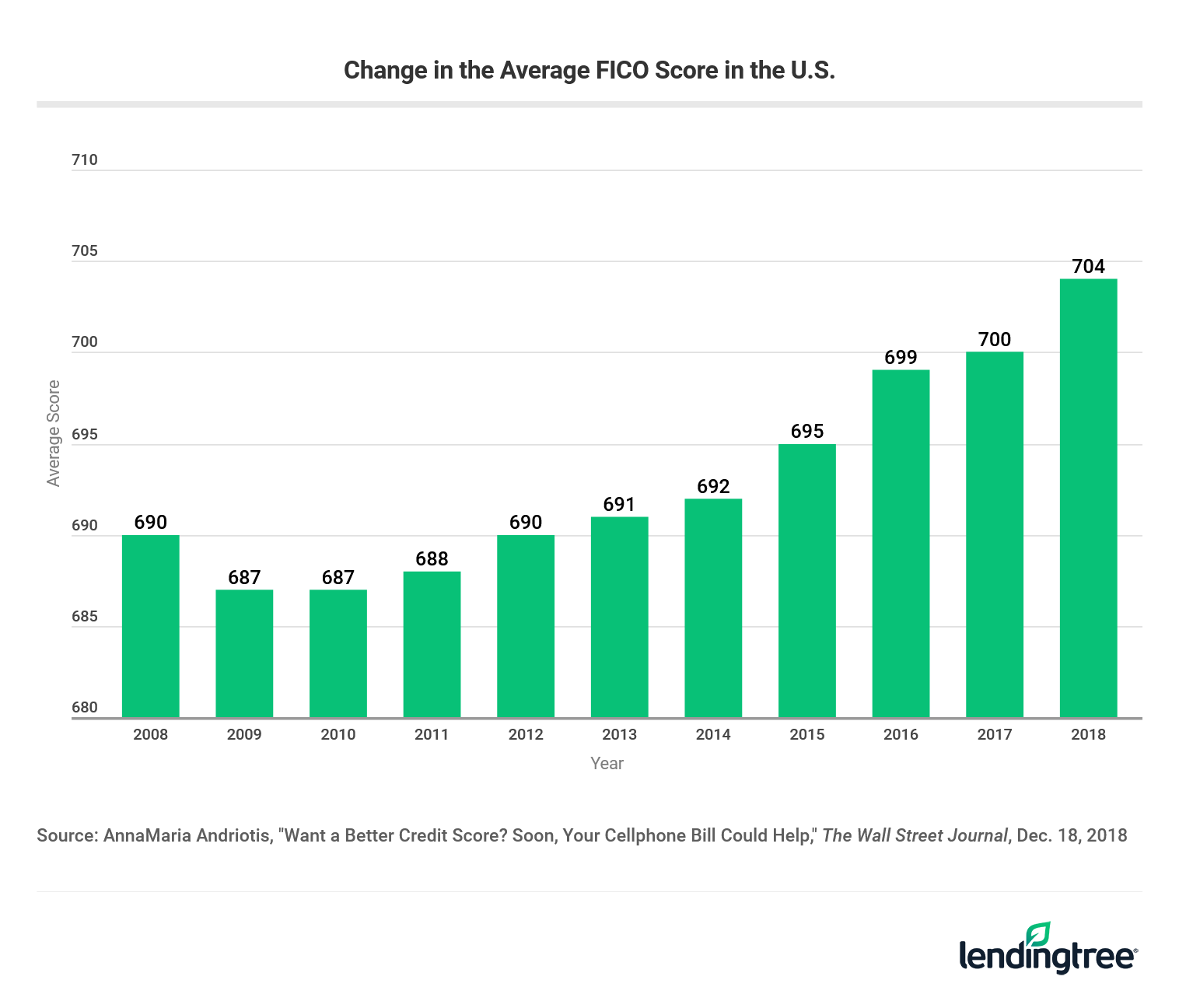 
Source: Analysis of an anonymized sample (July 2018) from among My LendingTree’s 9 million users.

A higher score usually means a lower APR on products like mortgages, or personal and auto loans. And, in general, raising your score is more impactful for those with a lower starting score if you look at average APR offers. That means a person who starts at 550 and raises it by 50 points will experience a larger percentage point decrease in APR offers than someone who starts at 750.

Interestingly, however, there is an outlier when you look at the score tiers: The lowest personal loan APR offers from LendingTree partners actually went to those whose scores fell between 780 and 789, rather than those with the highest credit scores.


Notes: Offered APRs represent the average offers from lenders to prospective borrowers using the LendingTree loan marketplace, where borrowers can choose the lowest offered rate, which may be significantly lower than the average of all offers. Credit scores are single, although significant, factor lenders used to calculate interest and fee rates, and thus those with similar credit scores may receive different offers based on other elements of their financial profiles.

Average credit score in each state

When you look at the average score by state, the bulk of scores fall into the 670 to 690 range. Only four states had an average credit score of 700 or higher: New Hampshire, Colorado, Montana, and Mass. On the other hand, the lowest tend to come from the southern region of the U.S. 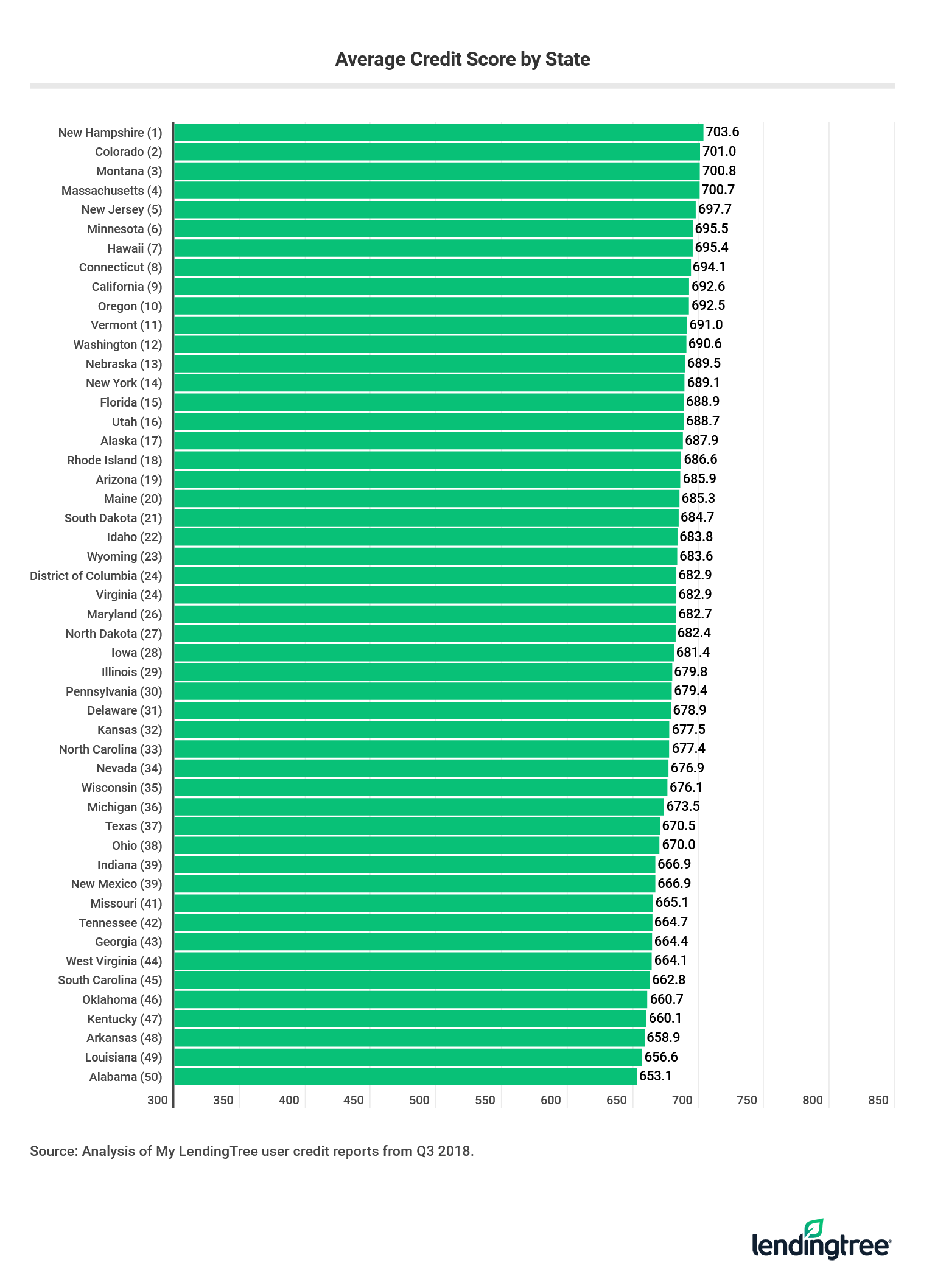 Compared to statewide averages, metro areas have a much wider range of averages, spanning almost 100 points. Thirty-one metro areas from 15 different states have a score of 700 or higher. On the bottom end, however, the trend toward lower scores in southern states holds true for metro areas. The lowest averages came from areas in states like S.C., La., Ark., Ohio, Miss., Ga.

Percentage of Americans who fall within these FICO score ranges 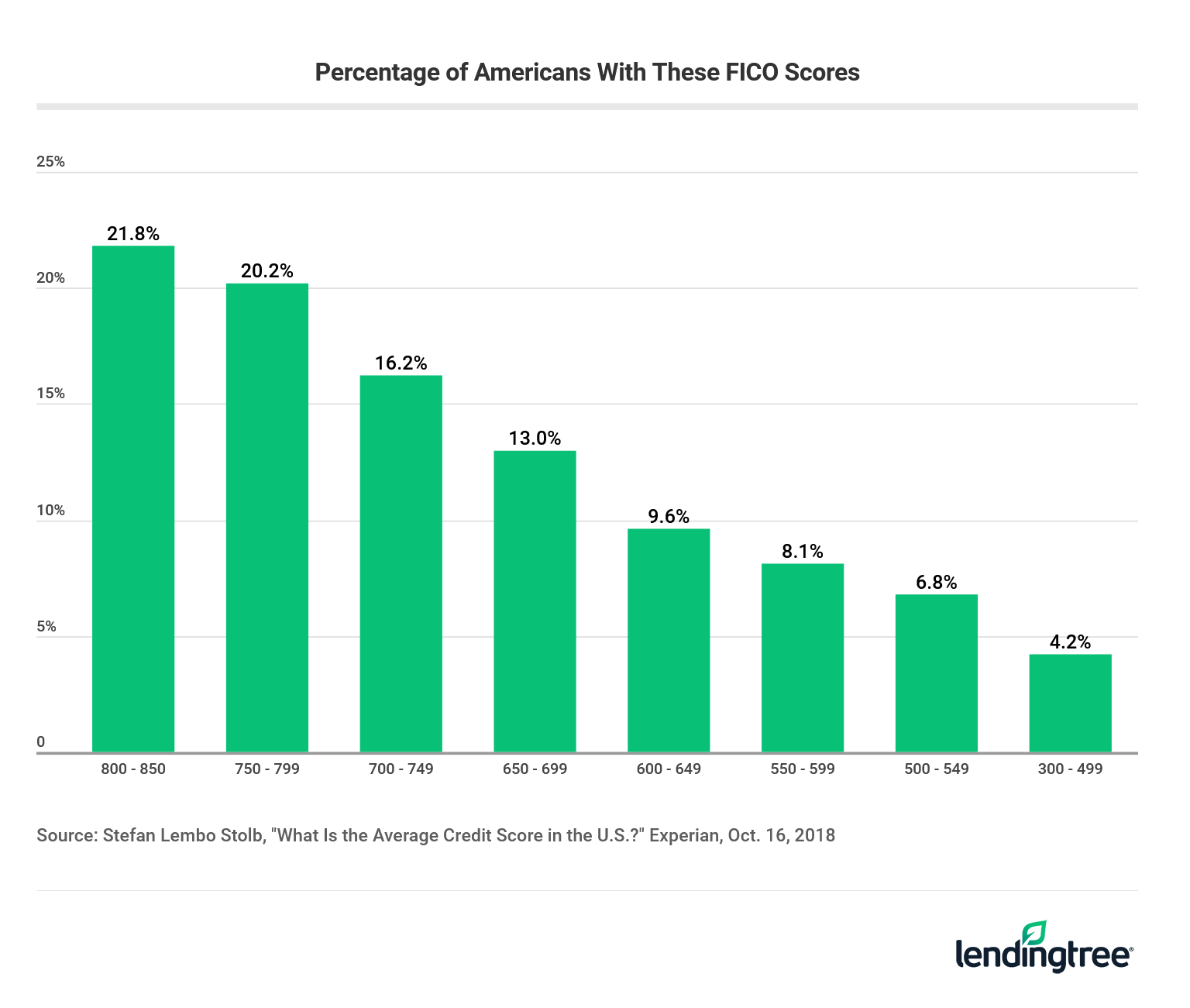 How credit scores improve after a bankruptcy

Between Oct. 1, 2005 and Sept. 30, 2017, 12.8 million people filed bankruptcy petitions. Bankruptcy can help those who have been buried under debt. But bankruptcy isn’t the end for your credit score, as this chart reveals. 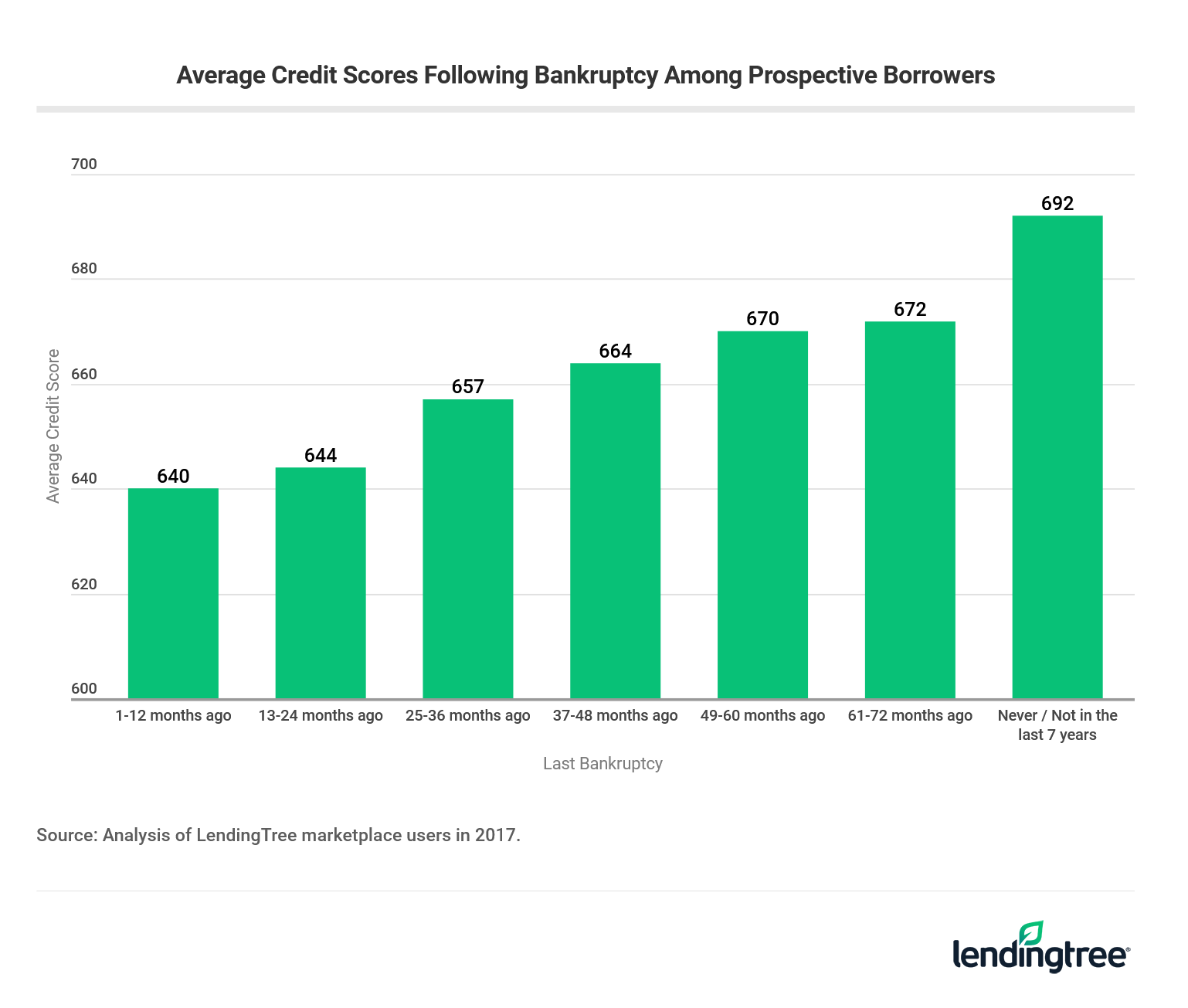 FICO scores aren’t the only scores that matter, particularly when you look at non-mortgage financial products. Alternative scoring models and sources are on the rise, which ultimately impacts consumers and the products and rates they qualify for.

A person can, and likely will, have different credit scores depending on the scoring model. Lenders create various models which they may use with different borrowers and products. For example, a bank may use one credit or risk score model for a person who applies for a credit card online than they would if for a customer who walks into a bank branch to look for a credit card.

FICO isn’t the only score used for mortgages

Although it’s often believed that FICO is the only score used when assessing potential mortgage borrowers, that’s actually a myth. While it is the most commonly used score for mortgages, lenders also use other scores during the underwriting processes.

For example, lenders who make offers to loan shoppers on the LendingTree platform do so using a score from TransUnion, which is modeled on the FICO score (although mortgage lenders may later include FICO scores is the full underwriting file because Fannie Mae, Freddie Mac, and FHA require those scores). FICO’s continuing popularity among mortgage lenders is likely attributed to the rule that only allows Fannie Mae, Freddie Mac, and FHA to purchase loans based on their FICO scores.

Other scoring models used for other loan products

Financial products, like auto, student or personal loans, as well as credit cards, and even employers and prospective landlords may use non-FICO scores or methods. VantageScore, for example, follows a different scoring model than FICO and has become more popular over time in almost all aspects of lending, except for mortgages. (source) In 2017, the average American has a VantageScore of 675. (source)

Advances in data collection and analysis also mean that some lenders don’t have to use FICO scores to make fast (and cheaper) judgments about their creditworthiness, particularly when you look at non-mortgage products. (source) And when you look at non-traditional sources, like bank statements and utility payments, those are becoming more accepted as proof of creditworthiness, too. Even Experian, one of the three major credit bureaus, is starting to use those sources to better calibrate their own scoring model for those with thin credit histories. (source)

While credit scores are significant factor lenders use to calculate interest and fee rates, it’s important to understand that credit scores are a factor in that process, so those with similar credit scores may receive different offers based on other elements of their financial profiles.  This is especially true of unsecured loans, like personal loans. But in the end, having a higher score can save a borrower serious money.  A LendingTree study found that raising a credit score from “fair” to “very good” can save borrowers $45,000 over the lifetime of a common array of loans.

A credit score is like a financial resume that lenders use to help determine rates and terms on financial products. In general, the higher the score, the lower the APR offers you can snag. That’s why it’s important to raise it — even if you aren’t planning on applying for a mortgage or other loan right now, it’s an investment in your future.

That’s especially true when you consider how quickly a credit score can dip in the event of a single missed payment or closing your oldest account. Just remember that the process of raising your score is usually a long-term one, rather than a quick fix.

One way to get started: Signing up for LendingTree’s free credit analyzer tool. Another key to raising or maintaining a credit score is credit monitoring, which keeps users up to date on the status of their score.

LendingTree alerts users to significant changes in their credit report within 30 minutes. And for those who need it, there are also  credit repair services which can aid in the score-raising process and help get consumers back on track.

Interested in learning more about credit scores? Check out these resources to get started: