The Most and Least Debt-Ridden Places in Texas

Everything is bigger in Texas, but does that mean debt is too?

Texas is one of the most affordable states in the country, with a strong economy, plentiful housing options and no state income tax. One downside to living in Texas, however, is that you pretty much have to own a car to get around, making auto loan debt a fact of life for many. Combine that with a large percentage of people paying for their education through loans, and Texans are regularly dealing with debt.

The following chart shows the 15 cities in Texas whose residents carry the most non-mortgage debt. Calculations were made based on four key areas of debt: student loans, personal loans, credit card balances and auto loans. 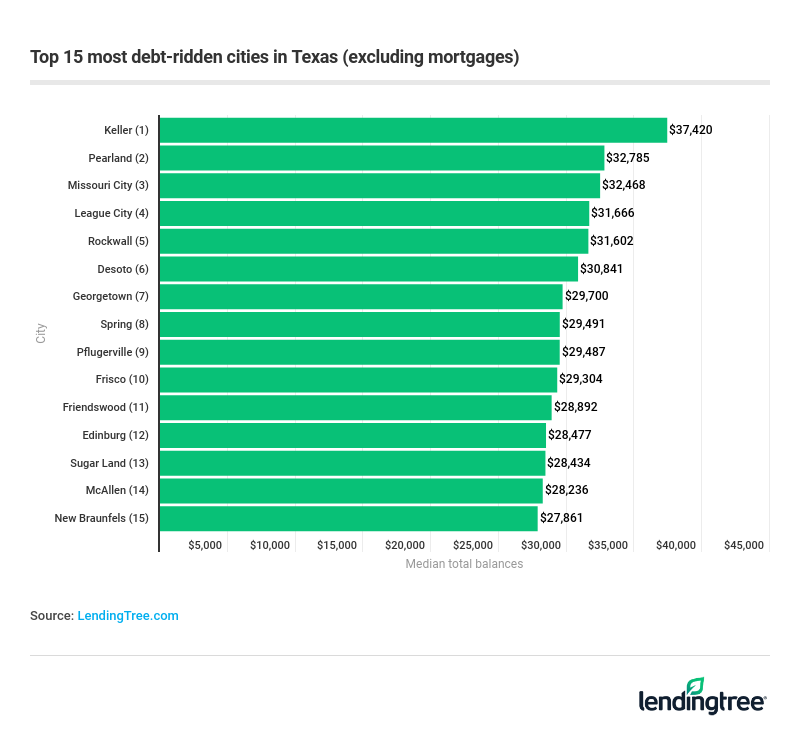 Keller, a city of about 45,000 on the outskirts of Dallas, tops the list, with its residents carrying an average of $37,420 in non-mortgage debt. Pearland, a city outside Houston whose 126,000-plus residents have an average $32,785 in non-mortgage debt, earns the second-place slot. Rounding out the top five in descending order are Missouri City, League City and Rockwall.

Only one of Texas’s top 20 most populated cities made the list. Frisco, the 18th biggest city in Texas with a population of over 154,000, comes in 10th on the list. Residents carry an average of $29,304 in non-mortgage debt.

This graph shows which cities in the Lone Star State are the least debt-ridden. Lufkin, a city in East Texas of about 36,000, takes the top spot here. Its residents carry an average of $13,312 of non-mortgage debt, which is almost a third of what residents of the most debt-ridden city, Keller, carry. 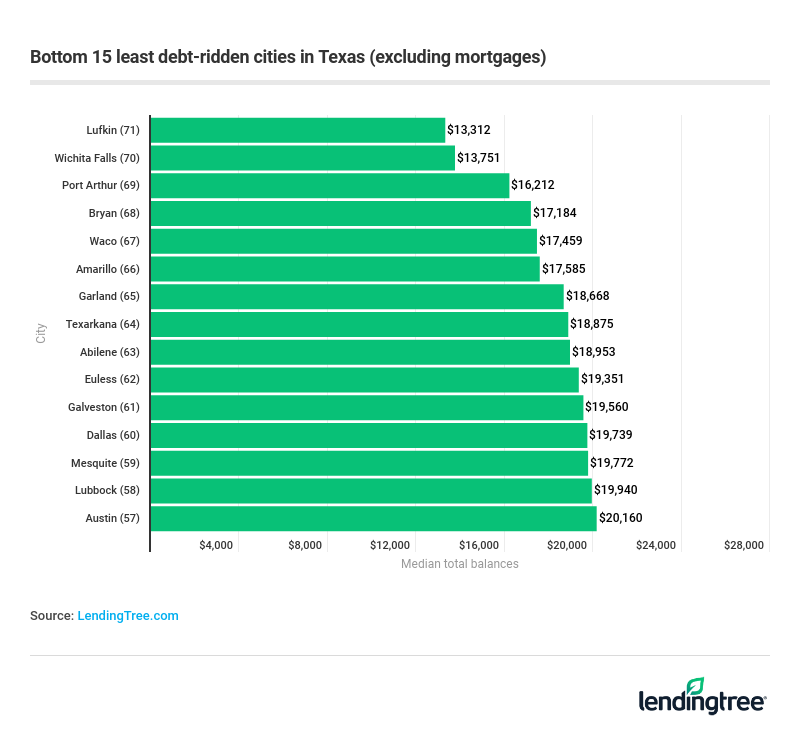 Wichita Falls in the North takes a close second place, with its 100,000-plus residents carrying an average of $13,751 in non-mortgage debt.

Other cities in the top five include Port Arthur, Bryan and Waco. Overall, in the top 15  least debt-ridden cities are quite a few of Texas’s biggest cities, including Amarillo, Garland, Dallas, Mesquite and Lubbock. Austin, the state’s capital, comes in 15th, with its residents carrying an average of $20,160 in non-mortgage debt.

A complete overview of what makes up the debt load of a city’s residents can be found in the below chart. It ranks all 71 cities we analyzed in order of total average non-mortgage debt load from most to least, with Keller on top and Lufkin on the bottom. Beyond that, it also shows which type of debt is earning them these slots, as well as which generation is carrying the most debt.

When it comes to generations, there is only one city in which Baby Boomers carry the most debt — Texarkana. There, residents carry an average of $18,875 in non-mortgage debt. In six cities — Mansfield, Odessa, Carrollton, Round Rock, Galveston and Waco — Millennials carry the most non-mortgage debt, while in all the others — 64 out of 71 — it’s Gen X racking up the most.

In debt? How debt consolidation may help

No matter where you live or what your generation, you can find yourself being dragged down by debt. The most important thing is to have a plan to pay it off as quickly as possible. After all, the longer you carry that debt, the more it can cost you as interest charges accumulate. To help, one option to consider is debt consolidation.

What is debt consolidation?

Debt consolidation combines several smaller debts into one larger one. This means you can make a single payment instead of juggling multiple bills with multiple due dates.

Ideally, you’d secure an interest rate that’s lower than the individual rates of your existing debts. With a lower rate, you could reduce your overall cost of repayment.

Two of the most attractive tools to consolidate debt are personal loans and balance transfer credit cards.

Personal loans are typically simple and quick to secure as long as you have good credit and a good debt-to-income ratio. You may also be able to secure an interest rate that’s significantly lower than the interest rate on your existing debt. However, not everyone will qualify for a personal loan, and the best rates are reserved for borrowers with excellent credit.

If you’re not eligible for a low-interest personal loan or balance-transfer credit card, two other options include secured loans and a debt management plan.

A secured loan requires some type of collateral, such as a car that has been paid off or equity in your home. Because your loan is backed by an asset, you can typically find lower rates on these products than on a personal loan. However, if you’re unable to pay off the loan, you could end up losing your collateral.

Debt management programs are offered by various companies and organizations and may help you come up with a plan to tackle your debt. That may include them negotiating lower interest rates on your behalf. Just be aware that most of these services come with a fee, which may not be worth it, and there are plenty of scammers in the field.

Before making any financial decision, make sure you’re making the best move for your money. Debt consolidation can be a great way to repay your debt for less money if you’re able to secure a lower rate on your debts and minimize fees and can avoid taking on new debt after you consolidate.

Using an anonymized sample of over 500,000 users, researchers calculated total debt balances with data from the first quarter of 2019. These results were then aggregated to the Texas cities with a population of at least 35,000 to calculate median non-mortgage debt obligation. Included in this analysis, researchers also found the average distribution of debts across the following debt types: auto, credit cards, personal loans and student.

The Most and Least Debt-Ridden Places in Texas

Texas may be an affordable state to live in, but many Texans are nevertheless buried in debt. See which areas carry the most and least amount of debt.