Despite this, some My LendingTree users were able to raise their credit scores by more than 100 points in the span of just one year. Here’s how they did it, according to our data.

To understand how some people take control of their financial standing, we looked at a sample of My LendingTree users who raised their scores by at least 100 points in the span of a year. Here’s what we found.

1. They improved their on-time payments

A history of on-time payment is the biggest factor when it comes to determining your credit score, so it’s important to make payments by their due date every month. Even just one missed payment can hurt your credit score, and it can remain on your credit report for seven years.

On-time payment rates for the group rose from 98% to 99%. While a 1% increase might not seem that significant, it suggests that those who raised their credit scores made all of their payments on time within the past year. Consumers who make late payments can expect their payment history to drop or stay the same.

Credit card utilization is another leading factor that goes into determining your credit score. Your credit utilization ratio, or the amount of credit available versus credit used, should be less than 30%. 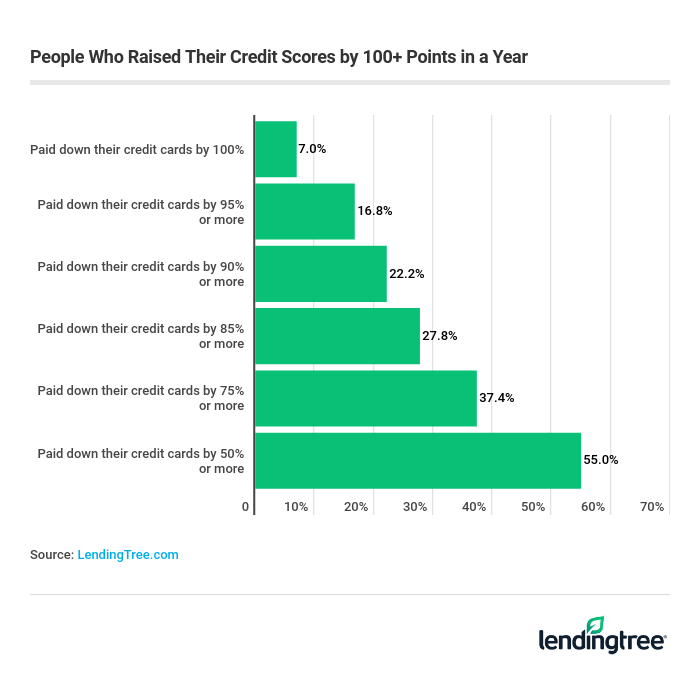 3. They lowered their overall debt ー by a lot

4. They lowered their monthly payments

Excluding credit cards, which have variable monthly minimums, monthly payments fell 10.5%, from $1,821 to $1,629. That’s an average of $192 that consumers can spend elsewhere or save. With lower monthly payments, consumers have more disposable income to put toward other debts like medical bills.

The differences between poor, fair and good credit may seem miniscule, but they can mean a lot for consumers who want lower interest rates for loans and credit cards. And while it seems like quite a feat to raise your score from one range to the next, nearly half of our sample raised their score by two ranges, from poor to good or fair to very good.

With the right formula, raising your credit score can be accelerated by a domino effect. Here’s how that works:

6% of the sample took out mortgages, and 13% took out auto loans

The data suggests that some consumers who raised their credit scores may have done so to get a mortgage or finance a car. With low credit scores, homebuyers won’t have access to more favorable terms, like lower interest rates and higher loan limits. But when they have favorable credit profiles, homeowners-to-be can secure mortgages that will cost them less money in interest in the long-term.

Twenty-five percent of the sample opened a personal loan, possibly to pay down their cards sooner or consolidate other debt. For consumers who opened a credit card, they may have chosen a balance transfer card to consolidate debt with a better interest rate.

Three-quarters of those who took out a personal loan paid down credit card debt by an average of $9,273 (69%), which was $5,289 less than their increased personal loan debt. This suggests that they put the difference toward other expenses and debts.

There are a few reasons why consumers may have prioritized paying down credit cards over other debt. For one, credit cards usually have higher interest rates than auto loans, mortgages and other types of debt. People who are trying to raise their credit scores probably wouldn’t qualify for a credit card with a promotional low-interest or no-interest period.

Plus, lowering credit utilization has an immediate positive effect on scores. So taking out a personal loan to pay off credit cards can raise your credit score even though you’ll still have the same amount of debt taken out in your name.

Using an anonymized sample of 932 My LendingTree users who increased their credit scores by at least 100 points between August 2018 and August 2019, researchers calculated changes to their high-level credit reports.

My LendingTree is a financial intelligence platform available to the general public, regardless of their debt and credit histories, or whether they’ve pursued loans on a LendingTree platform. My LendingTree has over 12 million users.