Crissinda Ponder
Published on: May 6th, 2019

The American homeowning dream still has its appeal: The nation’s homeownership rate currently sits at 64.2%, according to data from the U.S. Census Bureau.

However, growth in this homeownership rate appears to have stalled, and there has been a rapid increase in the number of rental homes across the country — underscoring the fact that homeownership may not be the best fit for everyone.

Whether you’re pro-renting or pro-buying, you’re among company. LendingTree’s latest survey reveals that while a majority of homeowners think owning a home isn’t as difficult as renting, more than 1 in 10 wish they could go back to the days when they had a landlord.

Below, we dive into how current homeowners feel about everything from whether they’re satisfied with their home to how they feel about homeowners associations.

Just over two-thirds (67%) of homeowners think owning is easier than renting.

About 15% of homeowners believe renting is easier than owning a home, and another 18% are neutral on the topic. Just 13% of homeowners across all ages wish they could go back to renting, but when broken down by age, 1 out of every 5 homeowners ages 22 to 37 say they miss renting.

In most cases, the longer that survey respondents have been in their homes, the more likely they are to believe owning is easier.  That changes for those who have owned for a decade or longer. Nearly 72% of homeowners who have spent seven to nine years in their home agree with the statement, compared with 65% of those with at least 10 years in their home. 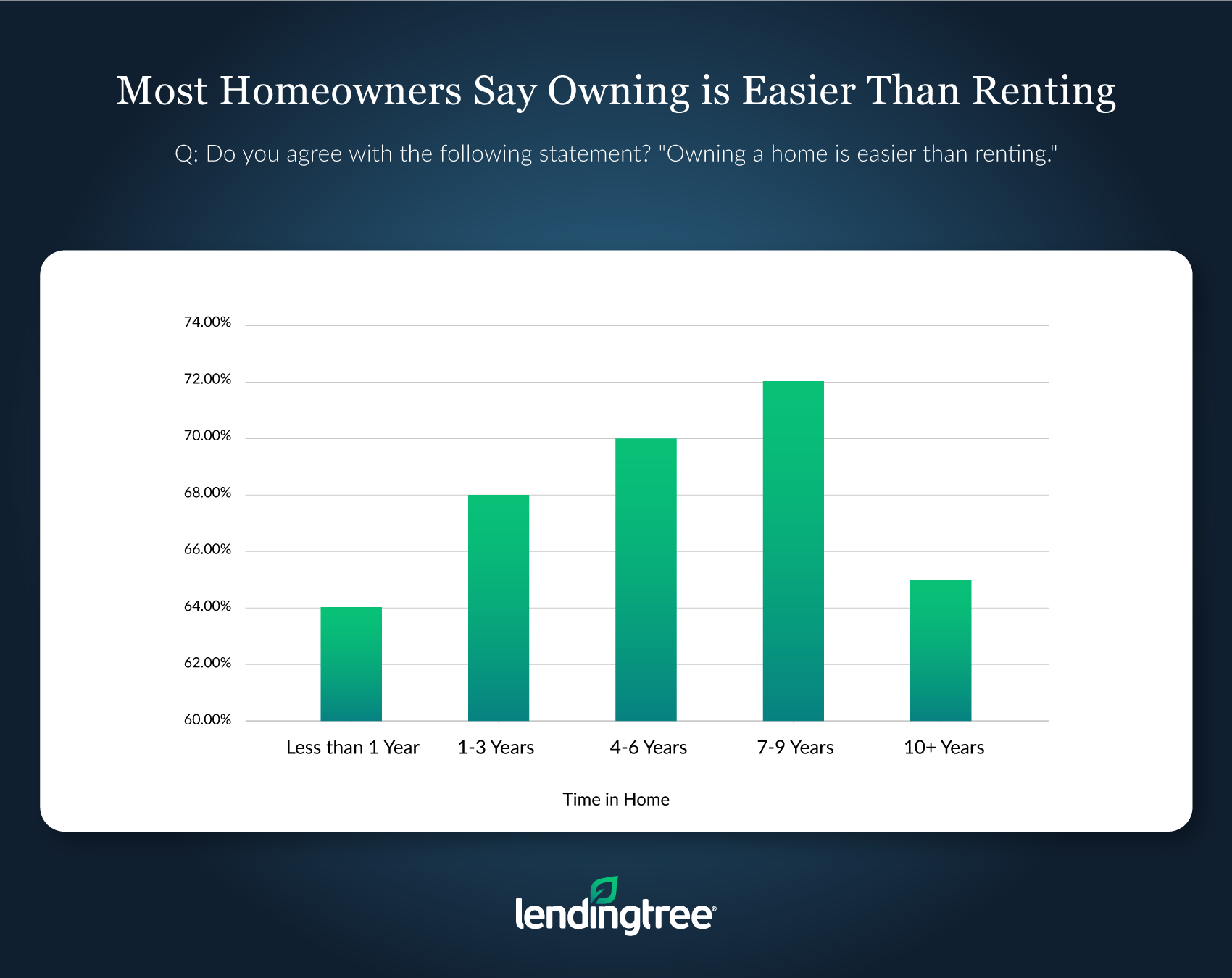 More than 1 in 5 millennials (21%) are dissatisfied with their home.

The same goes for the generation before that: Nearly a quarter (23%) of Gen X homeowners aren’t satisfied with their home either. Only 14% of baby boomers and 3% of homeowners aged 73 and older report the same.

Additionally, almost a quarter of parents with kids under the age of 18 are dissatisfied with their home.

Homeowners associations can make or break the ease of homeownership, our survey found, especially for millennials. Nearly half of homeowners aged 22-37 report that they’ve had a fight with their HOA. The top reason for an HOA disagreement is maintenance, followed by housing appearance regulations and neighbor nuisances, which include children’s behavior and noise.

Despite the occasional disagreement, nearly two-thirds (64%) of homeowners are satisfied with their HOA. 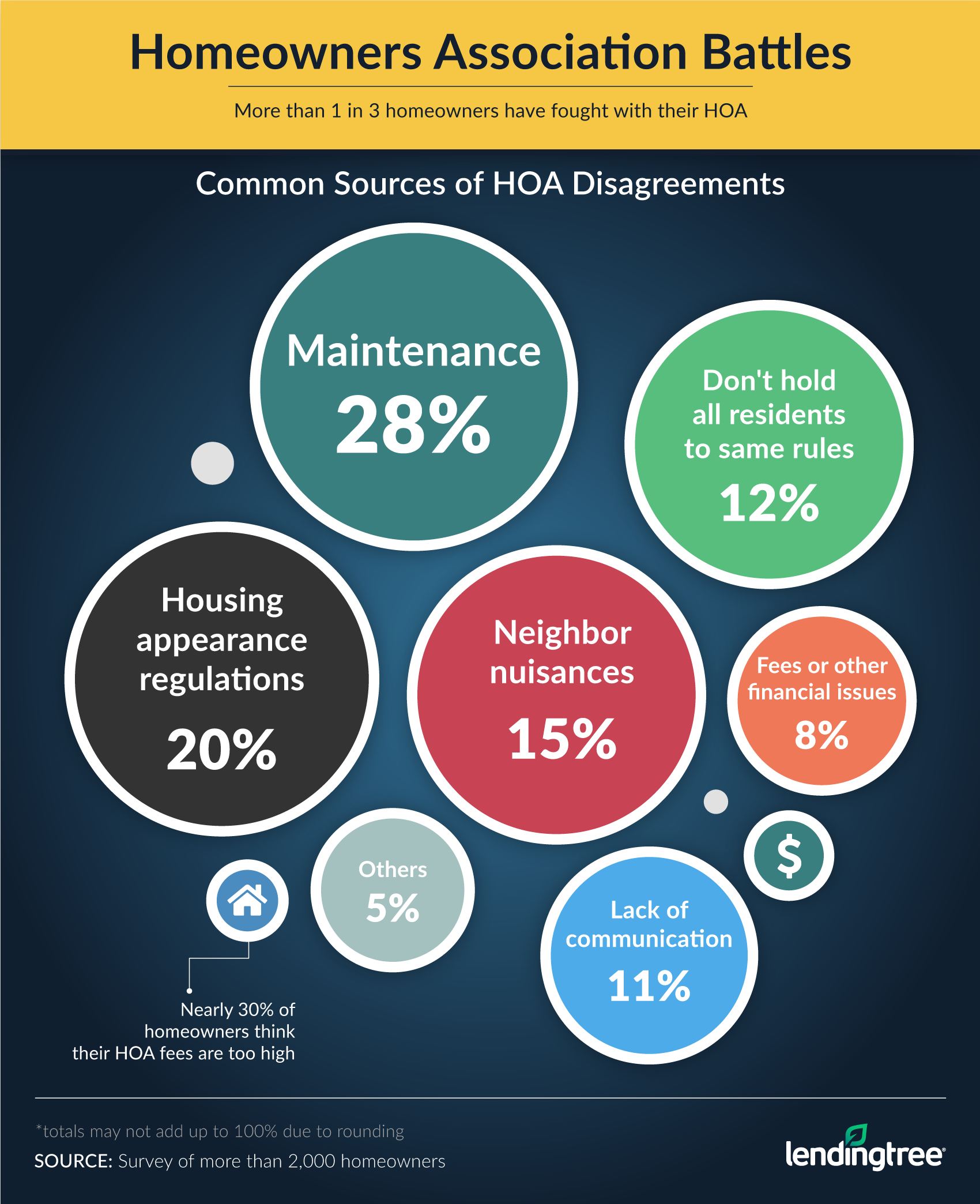 When asked if they think they’ll be living in a different state 10 years from now, only 9% of homeowners in Missouri said yes. Tennessee and Georgia homeowners are also likely to stay put, as 89% of Tennesseans and 87% of Georgians said they won’t be moving to a new state in 10 years.

Our survey found that the longer you own your home, the less likely you’ll want to rent again. Only 7% of respondents who have owned their home for at least 10 years wish they could go back to renting, compared with 19% of those who have owned for three years or less. 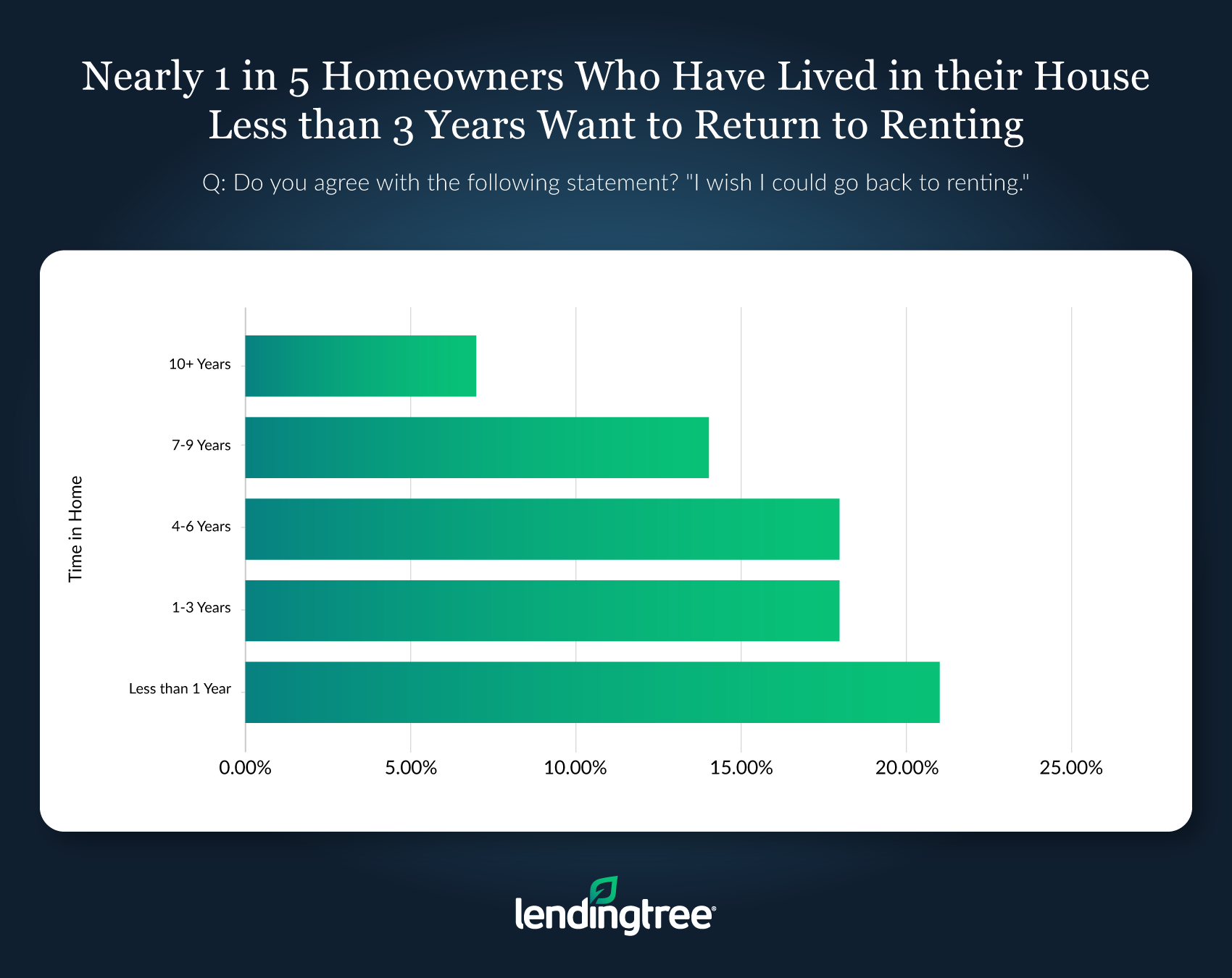 Almost a third (31%) of homeowners who have lived in their home for three years or less plan to move within the next year. Homeowners in the Northeast are more likely to say they want out of their state. Here’s the breakdown of states with the most people who want to move out:

Millennials appear to be drawn to neighborhoods that are part of an HOA. More than 2 in 5 millennials (43%) live in an HOA community. Just 30% of both Gen Xers and the Silent Generation, and 28% of baby boomers, report the same.

Baby boomers are most likely to think their HOA fees are too high (36%) compared with 27% of millennials and just 15% of owners aged 73 and older.

Should you rent or buy?

If you haven’t made the transition to homeownership, deciding whether to keep renting or buy a home should be a personal choice based on your own finances and not influenced by what your peers are doing.

One of the first things to consider is the level of commitment that goes into becoming a homeowner. If you know you’re not quite ready to live in the same community for years to come, it may not make sense to buy a home. Similarly, if you don’t yet have the financial capacity to handle unexpected appliance repairs and replacements, on top of routine maintenance expenses, it may make more sense to continue renting. After all, there is no landlord to handle repairs when you own a home.

Your financial profile is another important consideration, especially your credit reports and scores. A track record of late payments and evidence that you struggle to manage your existing debt are red flags for mortgage lenders. Additionally, while it’s possible to qualify for some mortgage products with a credit score as low as 500, it will cost you greatly — both in terms of your required down payment amount and mortgage interest rate.

You’ll also need to factor in the extra charges you’ll have as part of your monthly mortgage payment — property taxes, homeowners insurance and, if applicable, mortgage insurance.

For extra help with your decision, run the numbers by using our rent versus buy calculator. And if you think you’ll want to buy a home in the near future, check out the minimum mortgage requirements for various loan types to see which one might be best for you.

For this survey, LendingTree commissioned experience management firm Qualtrics to collect responses from 2,095 Americans aged 22 and older who currently own a home. The survey was conducted online from March 22-27, 2019, and the margin of error is +/-2%.

Generations are defined by the following age groups: