Places With the Most Student Debt

U.S. student loan debt hit the $1.5 trillion mark earlier this year, but Southerners appear to be shouldering more than their share.

Student loan debt has been growing for millions of Americans over the last two decades, and doesn’t seem to be slowing down. The cost of a four-year education has grown fivefold in that time, and Pew Research Center reports that 37% of adults under the age of 30 carry some kind of student debt. Altogether, Americans owe $1.5 trillion in student debt, a jump from about $600 billion a decade ago.

Incurring student debt isn’t necessarily a bad thing, and the return on investment — for those who leave school with degrees that are valued in the marketplace — is generally well worth it. The biggest problems tend to arise when people take on debt to attend programs they don’t complete or aren’t properly accredited or are generally unethical.

That said, not all student loans are alike, and the smallest amount of debt possible is always best. Rates and terms vary, especially between private loans, and students should consider shopping around for the best deal. Those who are currently struggling with student loan debt may have some options for relief, including refinancing options and even debt forgiveness programs.

Places that owe the most in student loans 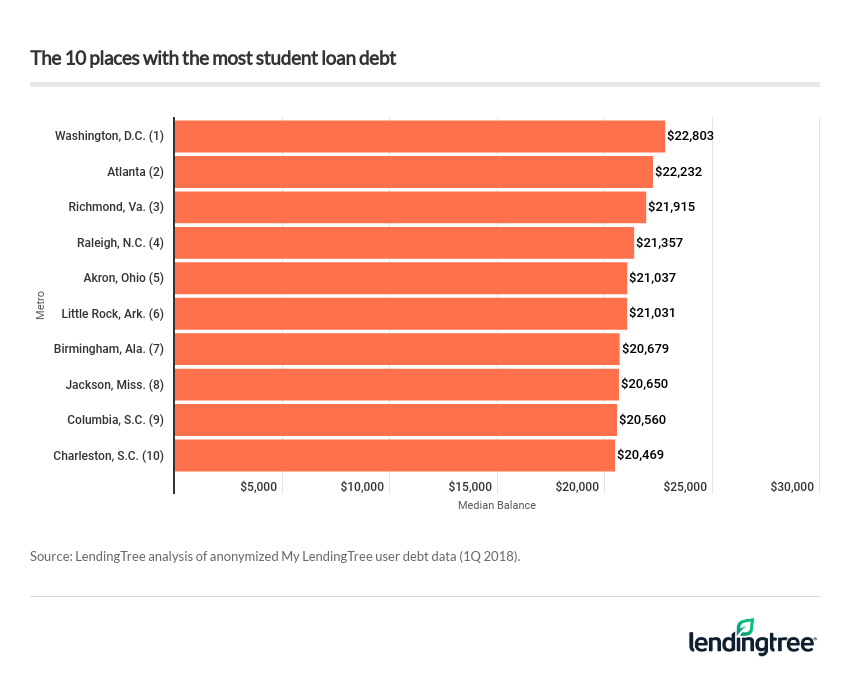 1 – Washington, D.C.
Median balance: $22,803
One in two people over the age of 25 has a postsecondary degree in the Washington, D.C. metro, which is significantly higher than the 30% of all Americans who have earned a bachelor’s or higher. Even more significant: Nearly one out of four have professional or graduate degrees, more than double the national rate of 11.5%. This helps explain why Washington also has the highest percentage of student debt holders who owe more than $100,000. That doesn’t mean these borrowers are necessarily in financial crisis though, because most completed their degrees and are earning accordingly. While 21% of Americans left college before finishing, and thus are perhaps paying off debt that hasn’t earned them any returns, the same is only true for 16.8% of those residing in and around the nation’s capital.

2 – Atlanta
Median balance: $22,232
Atlanta is another city of the highly educated — 37% of Atlanta residents ages 25 and over have completed at least a four-year education, and more than 13% have a graduate or professional degree, which is higher than the nation as a whole (11.5%). But it doesn’t completely explain why about 9% owe more than $100,000, when the average of the metros we reviewed is 6%. The metro is home to a plethora of higher learning institutions including Emory University, Atlanta’s John Marshall Law School, Morehouse College, and Spelman College. Perhaps the need for so many professors helps to explain why Atlanta is more educated — and in more student debt — than the nation as whole. Unfortunately, one in five Atlanta residents left college before finishing a degree, which is in line with the rest of country.

3 – Richmond, Va.
Median balance: $21,915
Nearly identically to Atlanta, 34% of residents of Virginia’s state capital age 25 and up have earned at least a bachelor’s degree, and 13% have earned a graduate or professional degree, with 21% leaving school without a degree. In addition to state government, Richmond is home to a federal appeals court, a Federal Reserve bank, headquarters for banks such as Union Bank & Trust and large law firms that attract highly-educated, professional workers. Despite all of those law degrees, only 7.7% owe more than $100,000 on their student loans, which is closer to the 6% average we saw for all 100 metros than compared with Washington’s 9.8%.

4 – Raleigh, N.C.
Median balance: $21,357
The fourth metro on our list is also the fourth capital. Raleigh famously sits in North Carolina’s Research Triangle, known as such because of the three major research institutions (Duke University, University of North Carolina and North Carolina State University), and the companies headquartered nearby take advantage of the highly-educated workforce. It’s no surprise then that 44% of Raleigh’s residents have a bachelor’s and 16% have an advanced degree. The rate of people who leave college before leaving is somewhat lower than the national average, at 19%. However, 8.7% owe more than $100,000 on their student loans.

5 – Akron, Ohio
Median balance: $21,037
The first metro on our list north of the Mason-Dixon Line (and not a capital), Akron’s education rates mirror the nation’s — 30% of residents over the age of 25 have at least a bachelor’s, 11% have a graduate or professional degree, and just under 20% left school before completing a degree. Akron is a manufacturing hot spot (including Goodyear tires), which means a lot of chemists, many of whom have studied at the College of Polymer Science and Polymer Engineering at the University of Akron. We found that 6.5% of residents owe more than $100,000.

Places where people owe the least 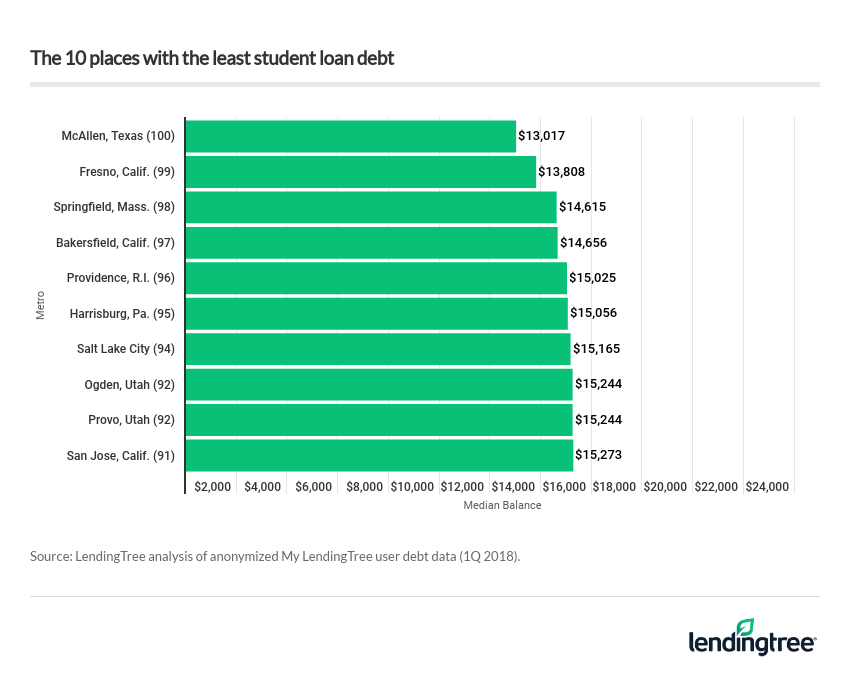 100 – McAllen, Texas
Median balance: $13,017
There’s a pretty good reason why residents of McAllen don’t carry much student debt: few of them go to college. Only 17% have a bachelor’s and 5% have a graduate degree. While the number of people who have some college is 3% less than the nation as a whole, it should be lower, given how few people complete school relative to the rest of the country. Only 3.3% owe more than $100,000, which is the lowest among metros we reviewed.

99 – Fresno, Calif.
Median balance: $13,808
Close to 20% of people age 25 and over in Fresno have a bachelor’s degree, and 7% have graduate and professional degrees. Unfortunately, 23% have taken some college courses without attaining a degree, which means that despite the low balances — only 4.4% owe more than $100,000 — those who owe on their student loans may be in a terrible position to pay it.

98 – Springfield, Mass.
Median balance: $14,615
At 31%, Springfield is in line with the rest of the country in terms of the number of people who have a bachelor’s degree, and actually has more people with graduate degrees (14%) than the nation’s average so it’s a bit of a mystery why residents owe so much less than elsewhere. Fewer people are holding large amounts of student debt, too — only 4.8% owe more than $100,000. Moreover, Springfield sits in the so-called Knowledge Corridor, an area surrounded by many universities. Maybe it’s because 18% left college before finishing, lower than the national 21%, but more than Washington, D.C.

97 – Bakersfield, Calif.
Median balance: $14,656
An agricultural community, only 16% of Bakersfield’s residents ages 25 and over have a bachelor’s and 5% have graduate degrees, which is less than half the rate of the United States as a whole. But that doesn’t mean residents haven’t pursued higher education: 24% attended college without obtaining a degree, which is higher than the national rate of 21%. We found that 4.8% of people with student loan debt owe more than $100,000.

96 – Providence, R.I.
Median balance: $15,025
In this Ivy League city home to Brown University, 30% of people over the age of 25 in the metro have a bachelor’s, and 12% have graduate degrees, which is a bit higher than the nation as a whole, but generally in line. We found that 18% have taken some college courses without finishing a degree, which is about 3% lower than the country as a whole and may explain why debts are relatively low.

How the Top 100 Metros Compare 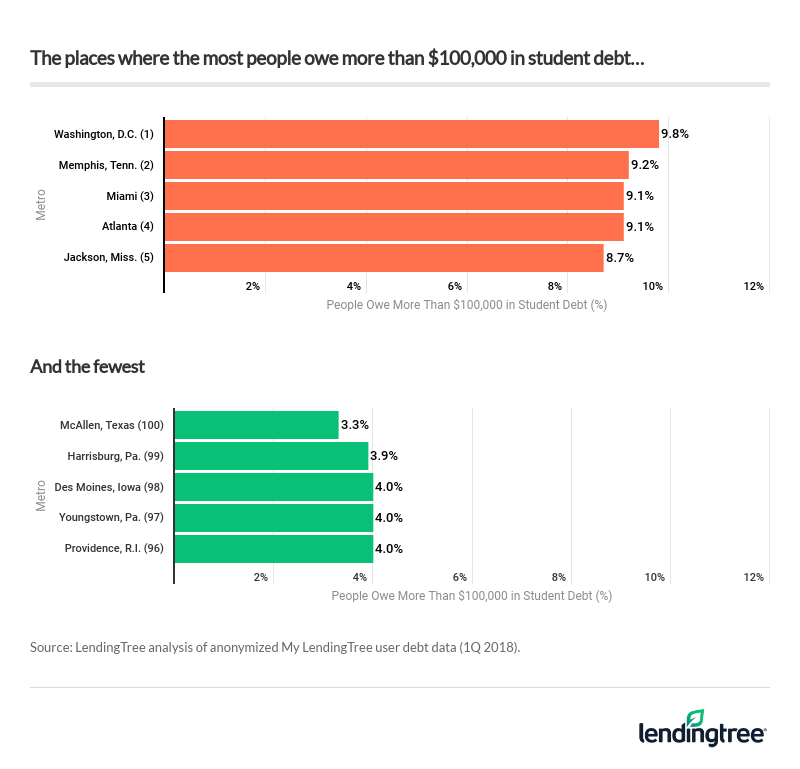 Methodology:
We looked a sample of anonymized users who logged into LendingTree in the first quarter of 2018 and calculated how many of them had student loans, as well as the other reported statistics related to their balances. In the event that someone logged in multiple times, we used their most recent report. These results were then aggregated to the 100 largest metropolitan statistical areas by population. LendingTree has more than 8 million accountholders. Credit report information is provided by TransUnion.