Homebuyers in the past two years have faced a unique set of challenges compared to pre-pandemic times. With inventory at record lows and demand at historic highs, prospective buyers had to employ various strategies to stay competitive in the demanding market.

LendingTree surveyed more than 1,000 homeowners — both newer and older — to examine concessions made during the buying process. Notably, in spite of navigating a tough market and making significant compromises, 4 in 5 who bought in the past two years didn’t regret their purchase.

Despite the challenging housing market in recent years, 83% of homeowners in our survey say they have no regrets regarding their most recent home purchase.

While this is similarly the case regardless of when they bought their home, homeowners who purchased more than five years ago are the most satisfied group, with 86% saying they have no regrets. A slightly lower but still high percentage — 80% — of buyers in the past two years say the same.

In addition to the timing of their purchase, our survey shows that a homeowner’s age influences whether they regret their most recent purchase. Older homebuyers are least likely to have buyer’s remorse, with 90% of baby boomers ages 57 to 76 reporting they didn’t regret their purchase. By comparison, 81% of millennials ages 26 to 41 and 80% of Gen Xers ages 42 to 56 and Gen Zers ages 18 to 25 say they have no regrets.

Some of the highest satisfaction rates are among homeowners whose children are all 18 or older (89%) and those who’ve never been married (87%).

The high satisfaction rate amid the hot market makes sense, says Jacob Channel, LendingTree senior economist. Given the market climate, prospective homeowners were willing to do what it took to buy a home. And with low interest rates in 2020 and 2021, buyers could make financial compromises to guarantee their purchase, he says.

According to our survey, recent homebuyers were more likely to make concessions than those who purchased in the past. An overwhelming majority — 94% — made at least one concession, while only 82% of homeowners who bought more than five years ago reported making concessions.

Newer homebuyers say they paid the listing price or above it at a much higher rate than homeowners who bought more than five years ago:

Bidding wars were also more prevalent in recent home sales. Buyers who purchased in the past two years got into a bidding war at more than double the rate of homeowners who bought more than five years ago — 8% versus 3%.

Homebuyers shopping amid the pandemic had to make concessions if they wanted to be competitive in the market. After the pandemic hit, the housing supply dwindled while demand was high, Channel says. As a result, would-be buyers had limited options from which to choose. “They had to be extremely competitive to win a bid on a house,” he says.

Again, because of the low mortgage rates at the time, many buyers were willing and able to pay extra for a house or waive things like inspections because not doing so would have put them at a disadvantage to other buyers, Channel says. 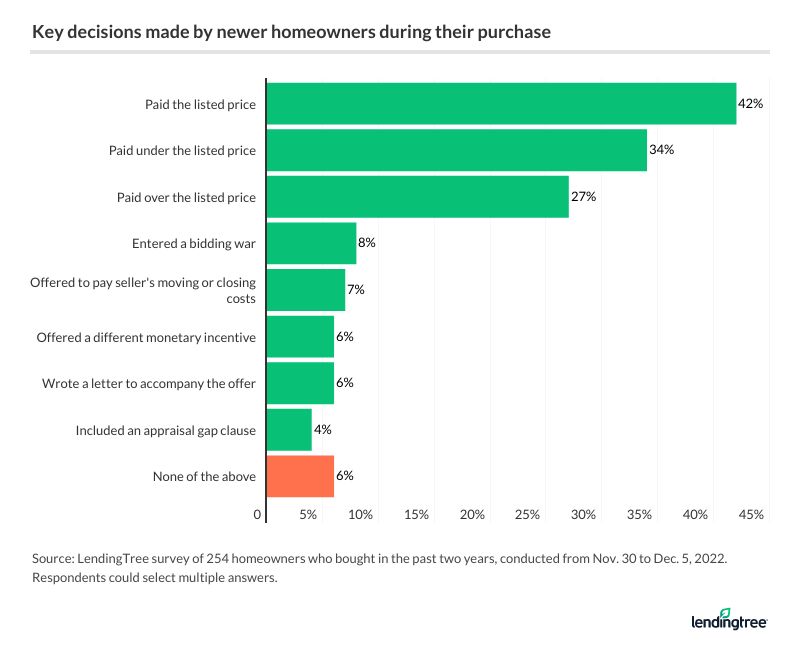 By homeowner age, baby boomers are the least likely to make concessions, with 23% reporting they made none. Gen Zers are the most likely, with 95% making at least one concession.

How a hot housing market can impact appraisals

With a significantly higher rate of buyers paying the listing price or above it in the past two years, home appraisals have become an increasingly crucial step in homebuying. According to housing market data from CoreLogic, the percentage of homes appraising below the contract price jumped from 7% in January 2020 to 19% in May 2021.

A low appraisal can significantly impact a home purchase — potentially delaying or even derailing the transaction altogether. Buyers who finance their homes must meet their lender’s loan-to-value ratio requirements. So if a home appraises too low, buyers may not qualify for their loan, leaving them to come up with the difference, pay private mortgage insurance (PMI) or walk away from the transaction.

Our survey reflects the impact of low appraisals in recent years, with 22% of buyers in the past two years reporting problems with financing due to the appraisal. 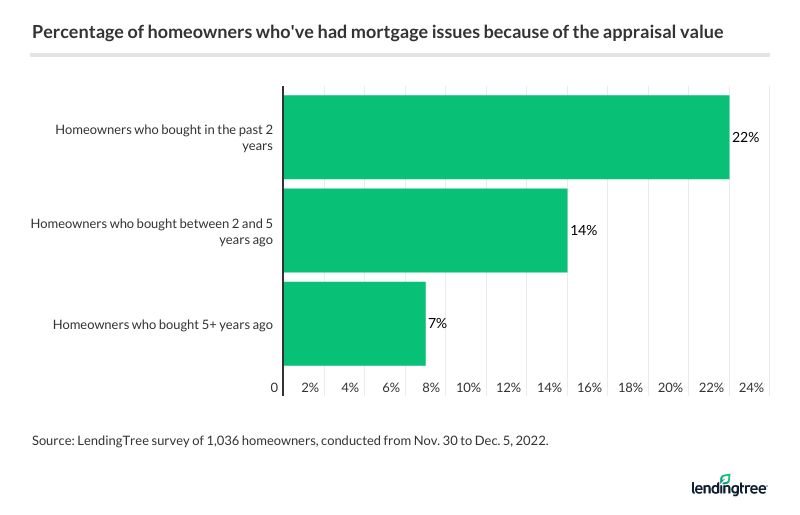 Concessions come in different packages, from making an offer sight unseen to opting out of an inspection

While many buyer concessions directly impact the home price, homeowners in our survey also made concessions to appeal to sellers, close quickly and help ensure they had the winning offer.

For example, 27% of recent buyers made an offer without seeing the inside of the home in person. This rate is significantly higher than the 7% who bought sight unseen more than five years ago. Younger homeowners are more likely to have taken this path — 24% of Gen Zers and 23% of millennials bought their homes without seeing the inside, while only 11% of Gen Xers and 4% of baby boomers say they did the same.

Skipping the inspection was another concession many buyers were willing to take — especially recent buyers, with 24% saying they opted out. This is double the rate of homeowners who bought more than five years ago (12%). Older homebuyers are less likely to forgo the inspection — only 7% of baby boomers and 14% of Gen X buyers waived their inspection, while 21% of millennials and 23% of Gen Zers opted out.

How skipping the inspection impacts the sale

“Though it may be tempting to save time or increase your chances of winning a bid, skipping out on an inspection is usually a bad idea,” Channel says. “Homebuyers can potentially miss negative aspects of a house that can end up costing them a lot of money in the future — or, in a worst-case scenario, render their home unlivable.”

Despite the more recent increase in skipping the inspection, most homebuyers ensure they take this crucial step. In fact, the results of an inspection often alter the transaction significantly.

Our survey shows that 47% of recent buyers changed their offer after the inspection, with the impact ranging from requesting repairs to backing out of the purchase. 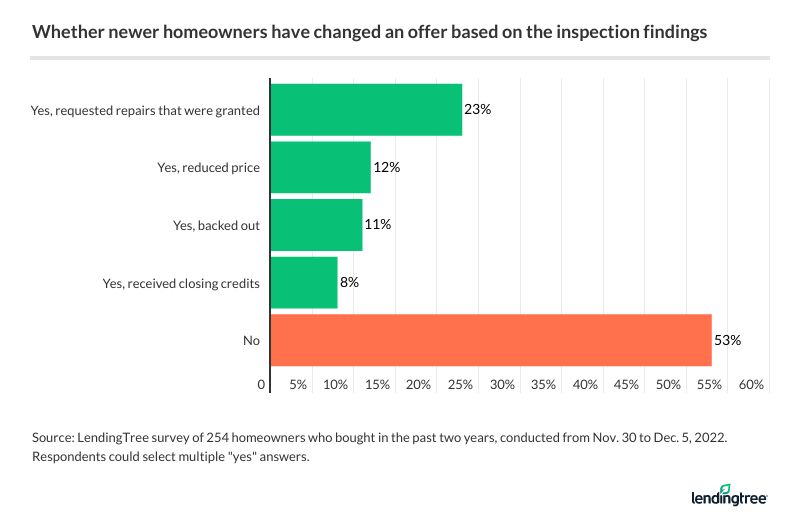 Younger buyers are more likely to change their offer after an inspection, with 48% of Gen Z buyers and 42% of millennials saying they altered their contract after the inspection. By contrast, only 22% of baby boomers and 33% of Gen Xers changed their offer.

Why homebuyers make the decisions they do

Our survey looked at the factors that drove homeowners’ decisions during the homebuying process. The most critical factor among all homeowners, regardless of when they bought their home, was saving money. Among those who purchased their home in the past two years, it was the most important factor for more than a third. 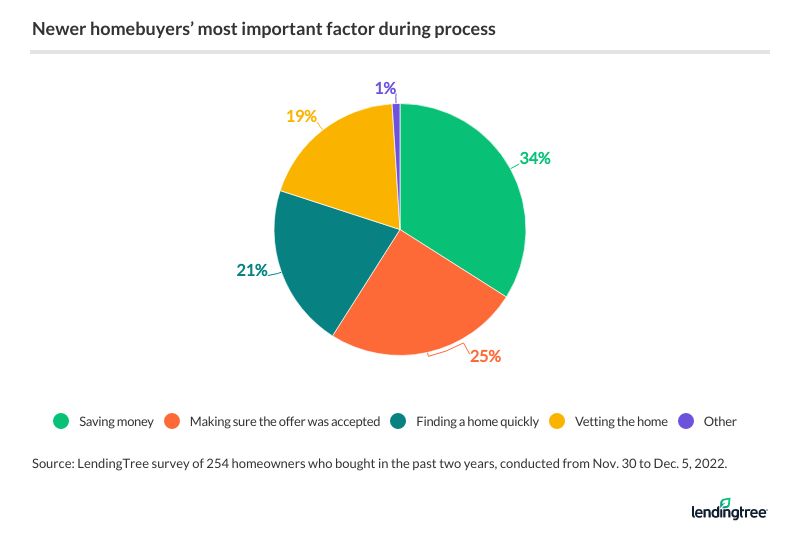 While saving money was generally the most crucial factor for buyers, it wasn’t the driving motivation across the generations. Here’s a look at the top three homebuying priorities of each generation.

On the other hand, older buyers may be in a better position to spend extra time and money to ensure a home is in perfect shape before making an offer, Channel says.

How a hot market can impact the homebuying process

The emphasis younger buyers place on the purchase price is likely tied to their ability to secure financing. Our survey shows that recent buyers experienced more issues with obtaining a mortgage than homeowners who purchased in the past.

Of those who bought in the past two years, 30% reported having problems getting a mortgage due to credit, income, debt or other financial challenges. This is a significantly higher rate compared to those who bought more than five years ago (10%). Baby boomers were the least likely to be affected, as only 5% reported having financing issues. Gen Z buyers were the most likely (31%).

The time-to-close also saw some shifts over the past two years, likely related to the increase in financing issues and appraisal delays discussed earlier. A 30- to 60-day closing was the most common timeline for buyers regardless of when they bought their homes. However, a more significant share of homeowners who purchased in the past two years experienced longer closing times.

LendingTree commissioned Qualtrics to conduct an online survey of 1,036 U.S. homeowners ages 18 to 76 from Nov. 30 to Dec. 5, 2022. The survey was administered using a nonprobability-based sample, and quotas were used to ensure the sample base represented the overall population. All responses were reviewed by researchers for quality control.

10 Things That Should Be on Your House Hunting Checklist

A great house hunting checklist could make the difference between getting the home you want or missing out because another buyer was better prepared.

Before you take on the process of buying your first home, here are some first-time homebuyer tips to help you navigate the process.

Learn how to steer clear of these homebuying mistakes, whether you’re buying your first or third home.